What would cities look like if we were to radically redefine the urban living experience by centering it around small interactive communities? The Global Village by MINI LIVING takes an experimental approach to answering that question with five compact, portable dwellings custom-designed for five different cities. The latest iteration is currently on display on the rooftop of ROW DTLA as part of the 2018 LA Design Festival, demonstrating MINI’s vision for improving the quality of urban life while adhering to the brand’s “creative use of space” credo. 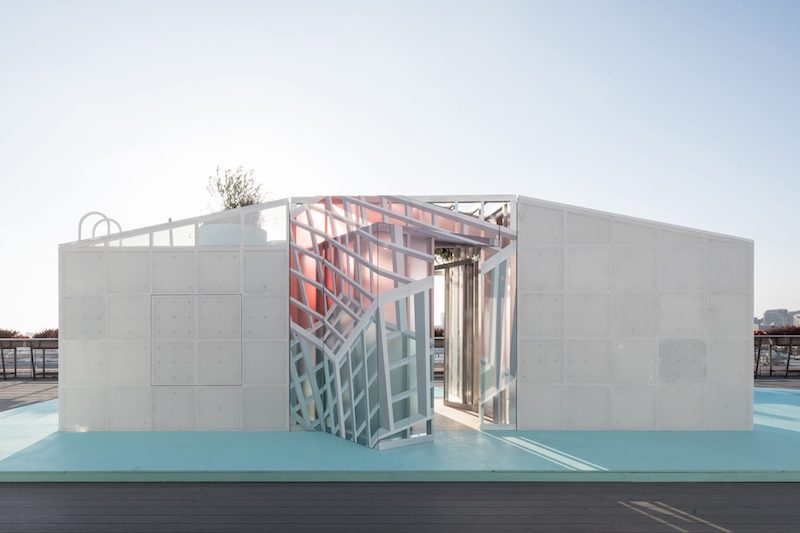 Well aware of the fact that globalization and the internet are leading to a homogenization of architectural styles around the world, MINI LIVING commissioned local architects in each of its chosen cities — L.A., London, Beijing, Tokyo, and New York — to infuse each dwelling with the spirit of its locale. The firm Freeland Buck took on this challenge in Los Angeles, producing a dynamic pastel “urban cabin” that captures the city’s sunny, modern sensibilities with a graphic facade and a transforming interior that belies its mere 161-square-foot size. 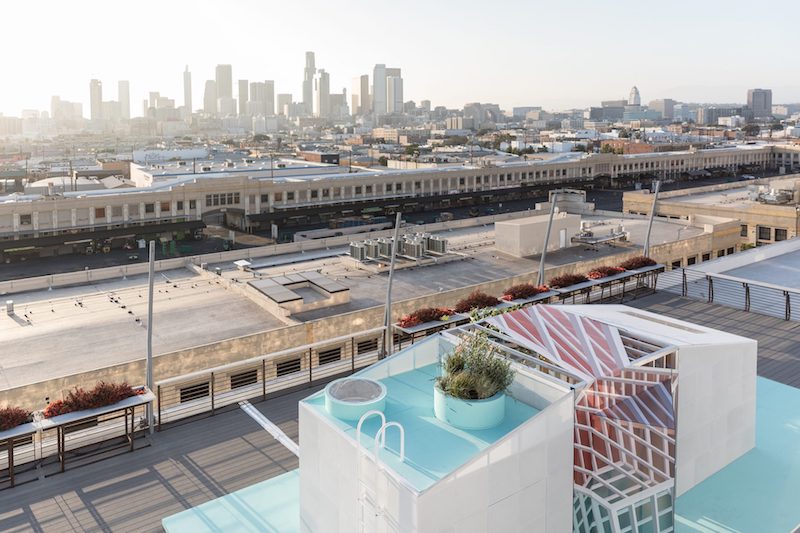 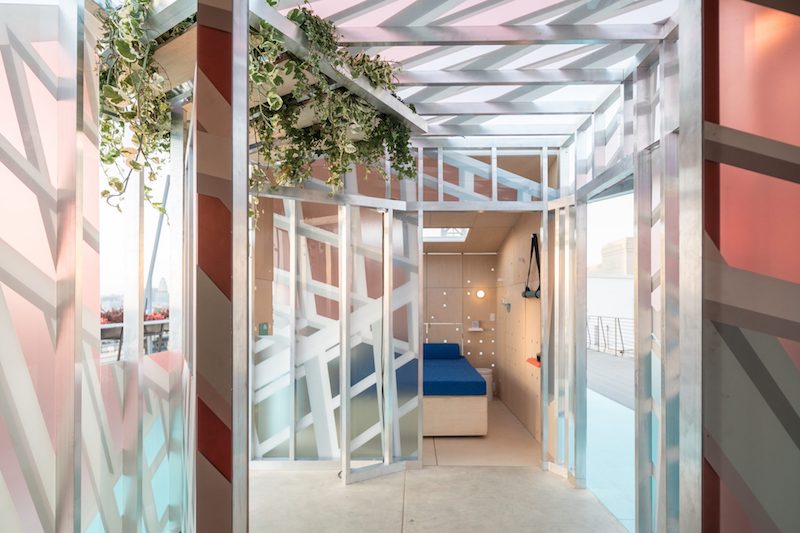 Compact, attractive, and highly adaptable, this cabin can be placed just about anywhere, opening up to its surroundings by day and closing off for privacy and introversion by night. MINI LIVING’s designers use timber as a core material in every one of their cabins, while the local architects source secondary materials from their respective areas to firmly root each structure in the traditions of its setting. The cabins can comfortably accommodate two people, with transforming elements inside folding, sliding, shifting, and rotating to reveal new functions.

The Los Angeles Urban Cabin consists of two cubic volumes on either side with a third cube offset within the central void, shaking up the interior layout just enough to make it seem much larger than it really is. The translucent facade allows daylight to filter inside, supporting a hanging garden of trailing ivy that’s suspended from the ceiling. A ladder outside leads to a rooftop terrace with another small garden of its own. 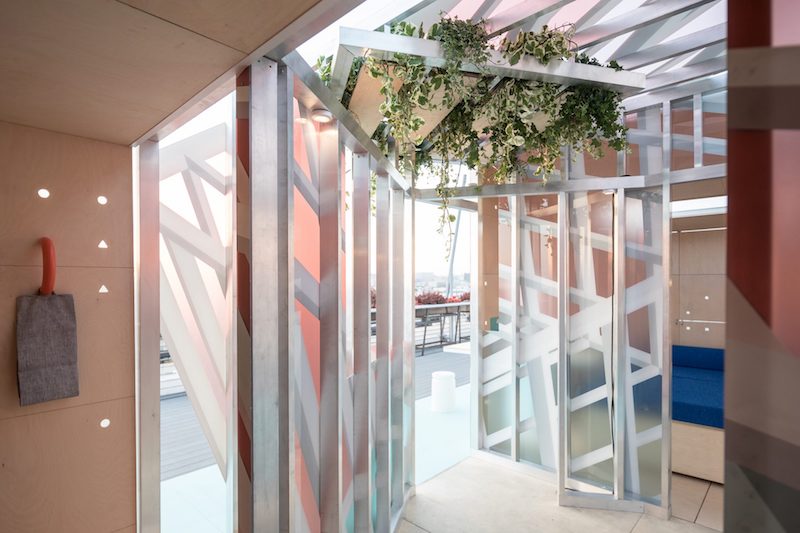 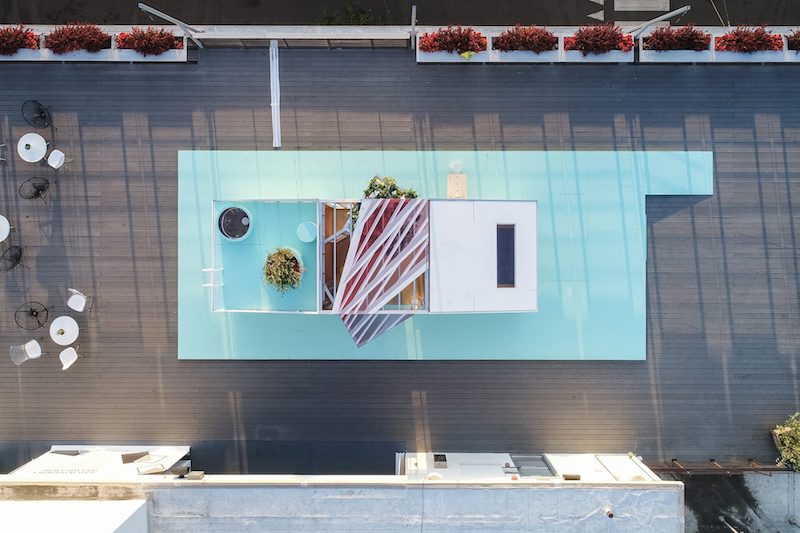 “What we set our thematic focus on with this specific one is the fact that people in LA live a life that is very much connected to nature,” says MINI LIVING designer Corinna Natter. “However, usually they have to leave the city to experience it. We wanted to give them the opportunity to do that within the city — right in the heart of downtown.”

“LA is characterized by remarkable architectural variation sprawling between mountains and the ocean,” says architect Brennan Buck. “This diversity enables both the city and nature to be used as archetypal settings, not only for the film industry, but for everyone. We considered how the cabin would be captured and experienced, and utilized surfaces that vary between graphic alignment and kaleidoscopic effects as one moves around and through them.” 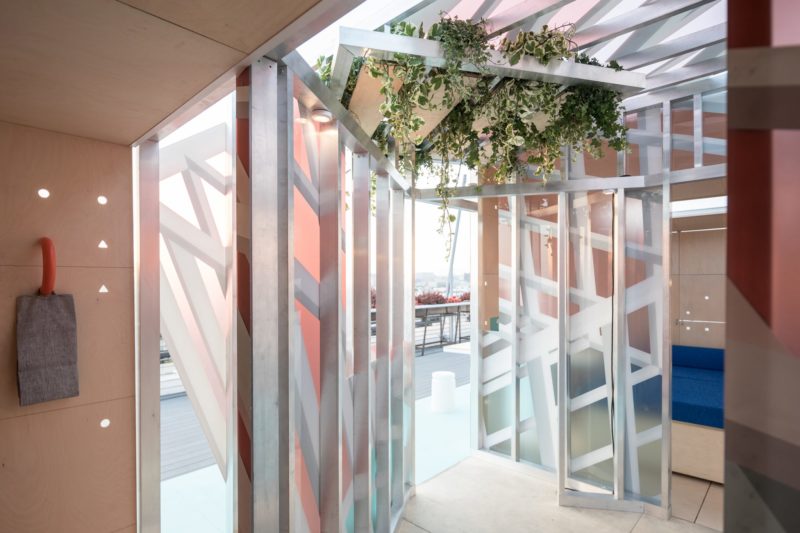 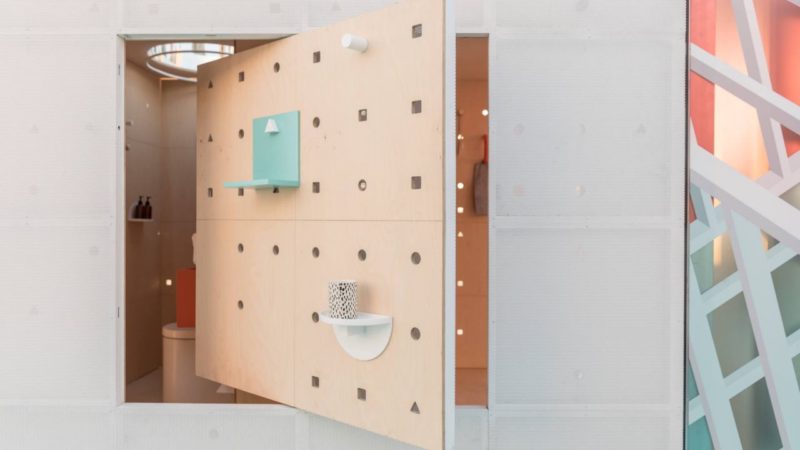 MINI LIVING’s first fully operable co-living hub will open in April 2019 in Shanghai, officially taking its global village concept to the next level. Though the five temporary cabins and this new hub may be located many thousands of miles away from each other, together they form a united village. The other four 2017 cabins can be viewed on the MINI LIVING website.