Artist Steve Messam’s work is impossible to ignore. If you took a walk through the immaculately landscaped grounds of northern England’s Studley Royal Park last year, you would have taken in a startling sight: lurid yellow spikes protruding from an elegant classical portico known as the Temple of Piety. Built nearly 300 years ago as a garden folly, the structure is based on an Ancient Roman temple of the same name that was torn down in 44 BCE. Messam calls this piece “Spiked.” 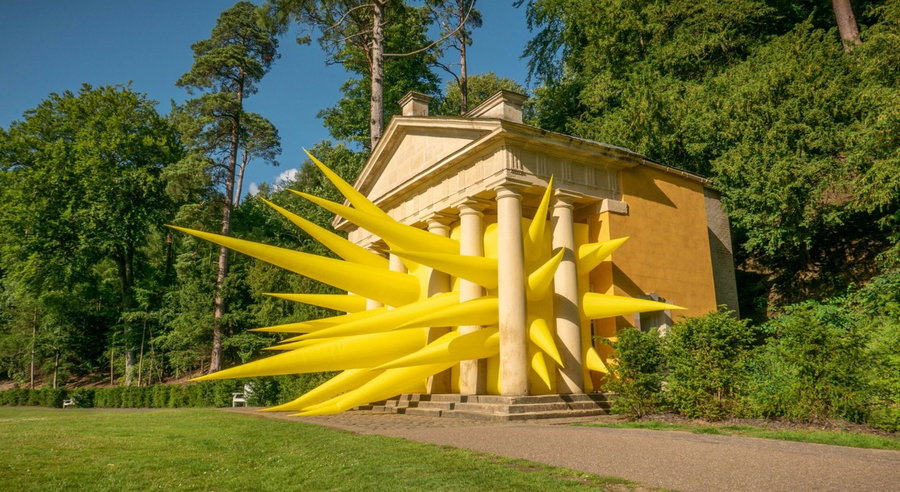 Elsewhere on the 800-acre grounds of this UNESCO World Heritage Site were two more of Messam’s large-scale artworks: “Bridged,” a similarly spiked installation placed across the River Skell, and “Drifted,” a series of floating replicas of the Studley Pyramid set on the upper Canal.

All three sculptural works are part of “These Passing Things,” a temporary exhibition aiming to infuse the landscape with “visual exuberance.” Originally intended for installation in summer 2020 and delayed due to the pandemic, the exhibition aims to revive the playful spirit of Georgian follies in a contemporary way, lightening the mood of all who view it. 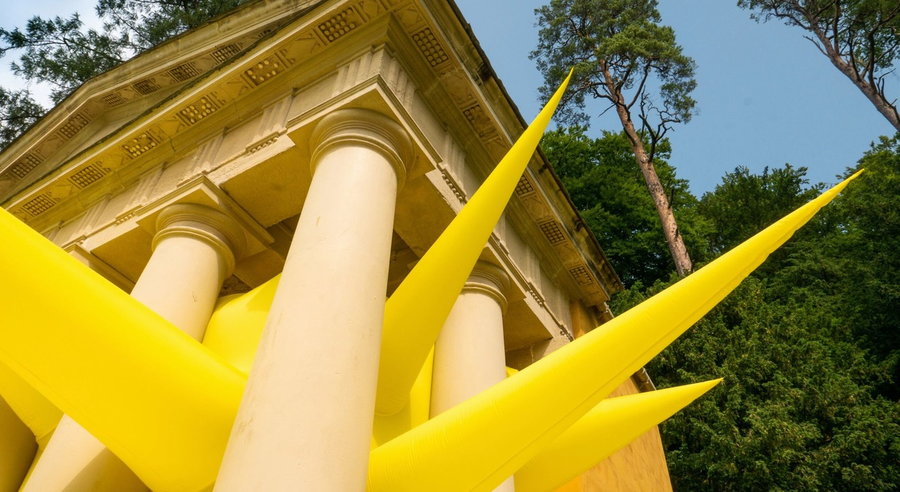 “The work is inspired by designs for a 16-meter-high funerary pyramid in the water garden,” Messam explains. “Archive records show this was commissioned by William Aislabie in the 18th century, after his father’s death. Despite scale drawings and detailed costings for the piece, no further mentions of it were ever made, and no record or evidence exists of this mysterious pyramid ever being built.” 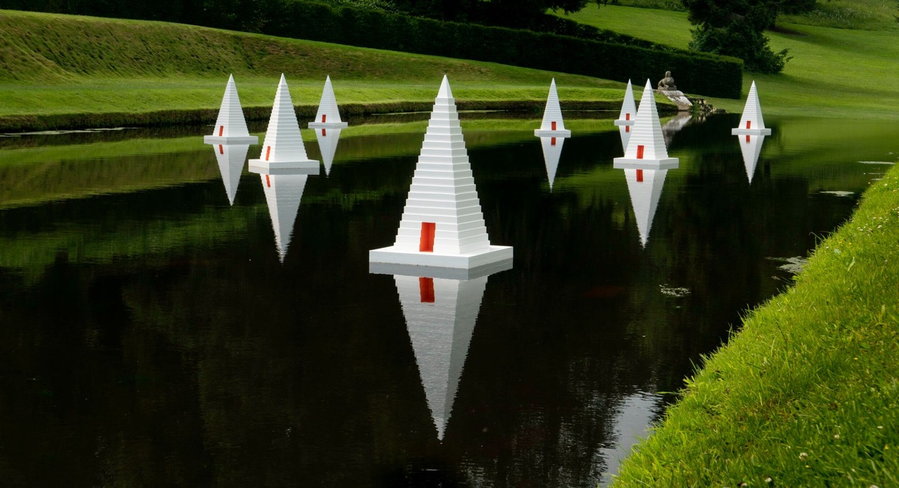 He adds that “the original designers of the Studley Royal water garden, the Aislabie family, created many follies to surprise and delight their 18th-century guests. Since 2015 The National Trust at Fountains Abbey and Studley Royal have been celebrating these fashionable and whimsical structures and the Georgian water garden they sit within, through its former folly exhibition series.”

The managers of Studley Royal Garden say they hope the installation will get visitors thinking and start a conversation about the connection between the past and the present while offering a fresh perspective on the Georgian garden. Like many traditional follies (ornamental structures built purely for decoration), Messam’s are ephemeral and have no specific function other than their visual impact. 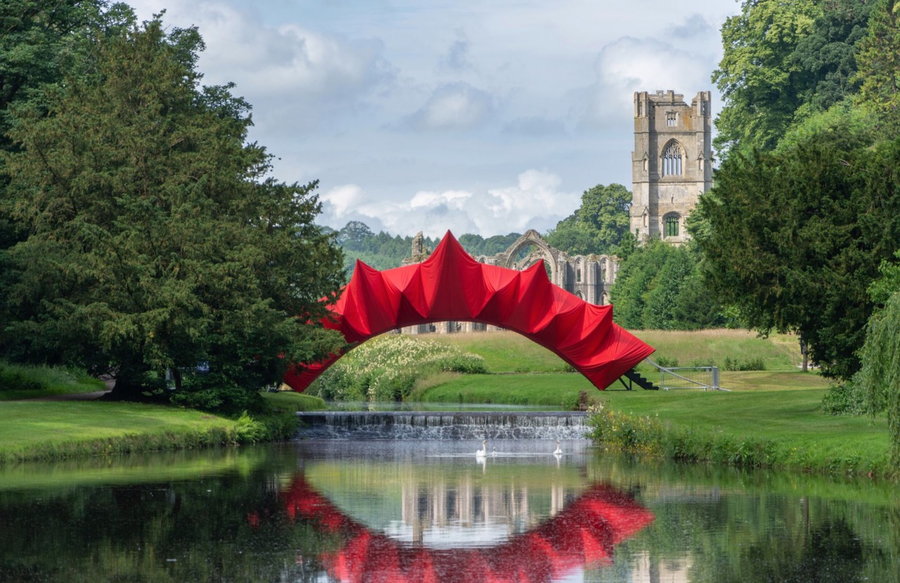 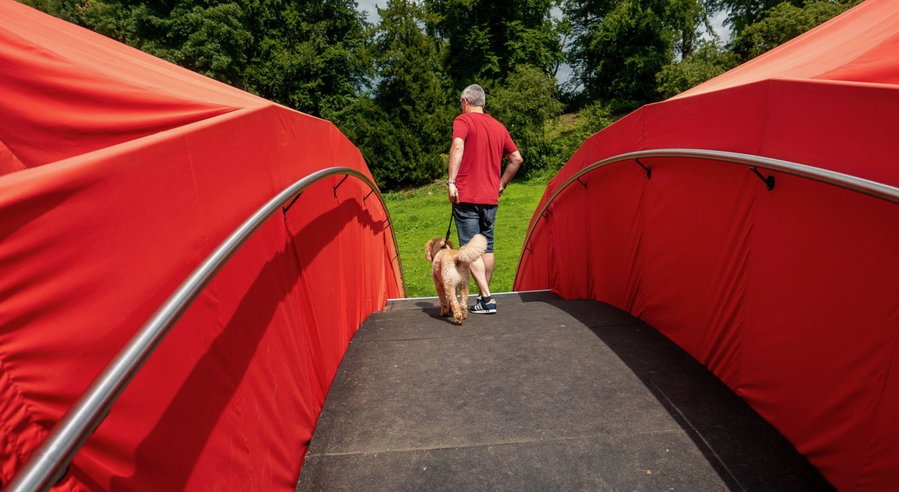 “While over time we may invest them with meaning or stories, at their core they’re just there – large-scale artworks in the landscape, and as an artist that’s what I’ve been interested in for the past 20 years,” he says. “I’m also interested in the role that follies play in creating focal points in constructed views of the landscape.”

To create “Spiked,” Messam used old plan drawings of the temple to create life-size paper patterns using CAD software. He worked with preservationists to ensure that the inflatable piece wouldn’t damage sensitive elements of the temple like the plaster ceilings. A single quiet fan kept the artwork inflated to maintain the contemplative nature of the setting. 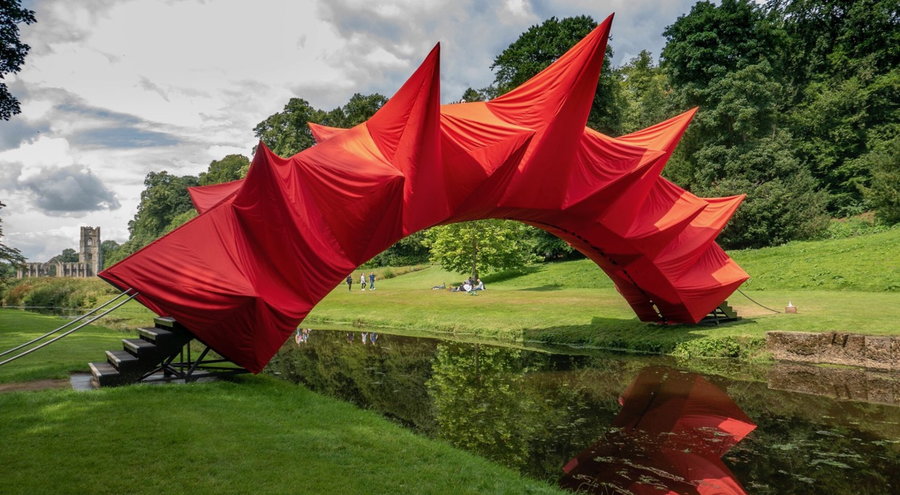 Both “Spiked” and “Bridged” are made of hundreds of yards of fire-resistant polyester, and the steel bridge was custom-built for the project by an engineering firm. About 500,000 visitors crossed the installation between July and November 2021, itself located near the site where a Georgian iron bridge was once located.