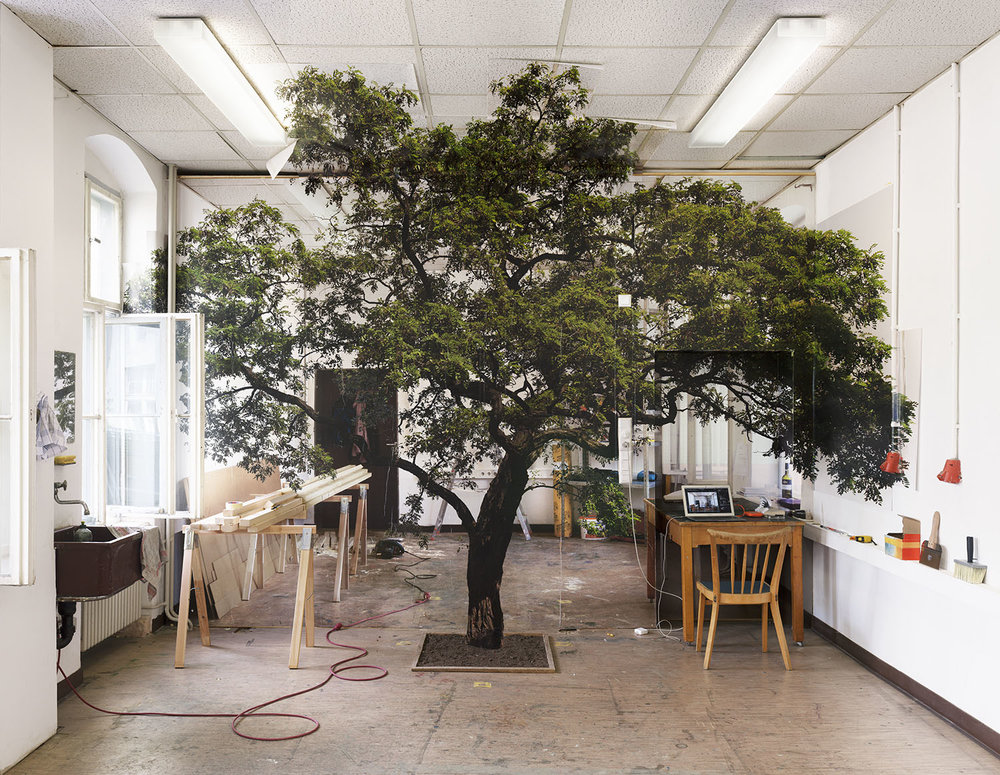 It may look like there’s a real tree growing within this art studio, but take the time to examine the image a little closer. Notice how the branches at the far right side actually follow the contours of the wall? See the edges of the paper upon which the leaves are printed peeling away from the ceiling? The illusion of the tree’s presence is so complete, it’s almost hard to believe someone didn’t build a room around it — but it’s all (literally) a matter of perspective. If you were to slide a few steps to the left or right within this physical space, the illusion would break as its architectural features began to fragment the imagery.

Pulling off these optical illusions isn’t a matter of using Photoshop or otherwise manipulating the final image. It all comes down to a surprisingly simple process of printing an enormous photograph out on many sheets of paper and then assembling them to fit the space. But it does take painstaking precision for Los Angeles-based artist  to pull off the hyperrealistic qualities of these incredible installations. 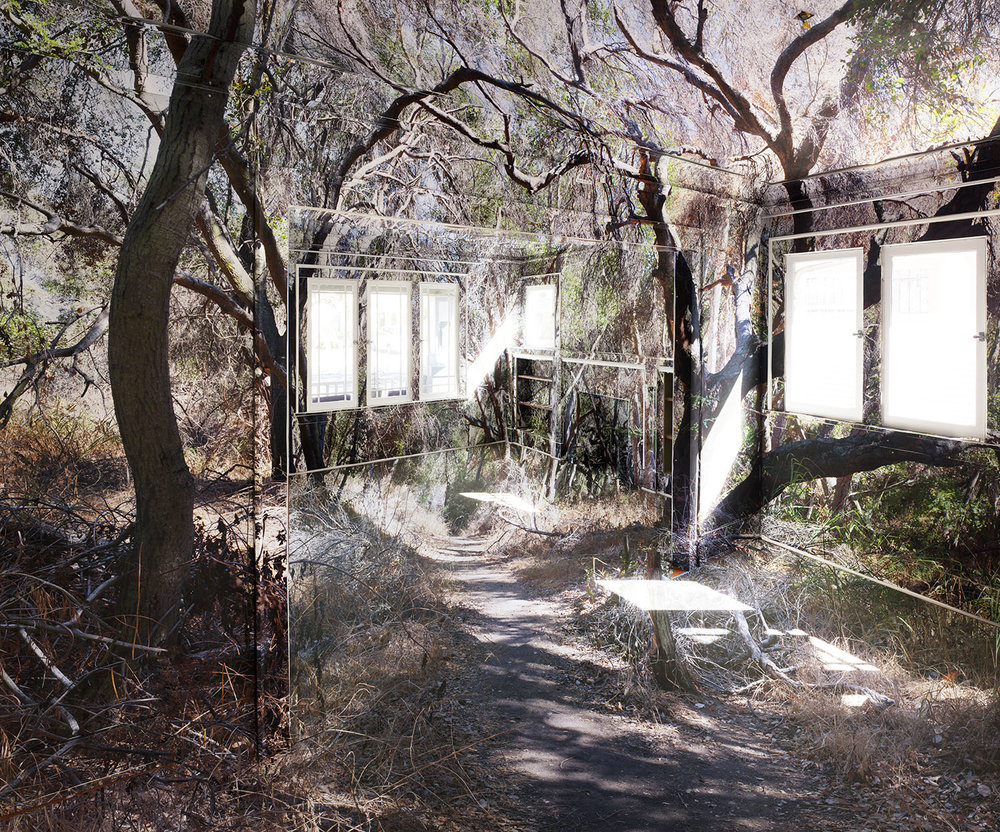 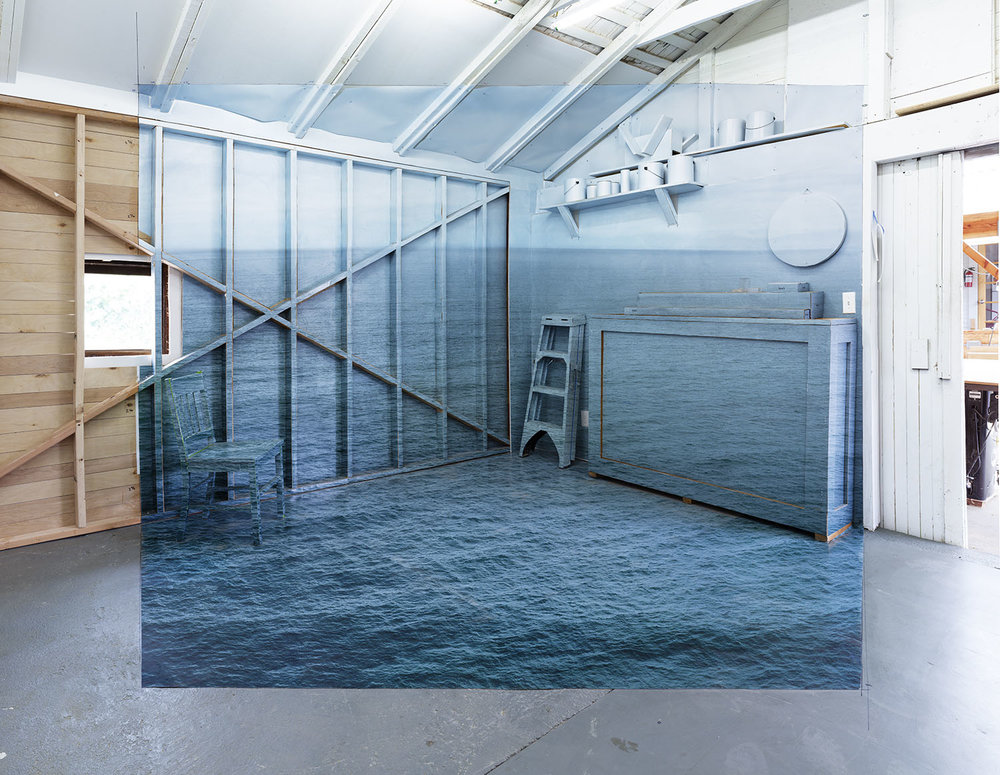 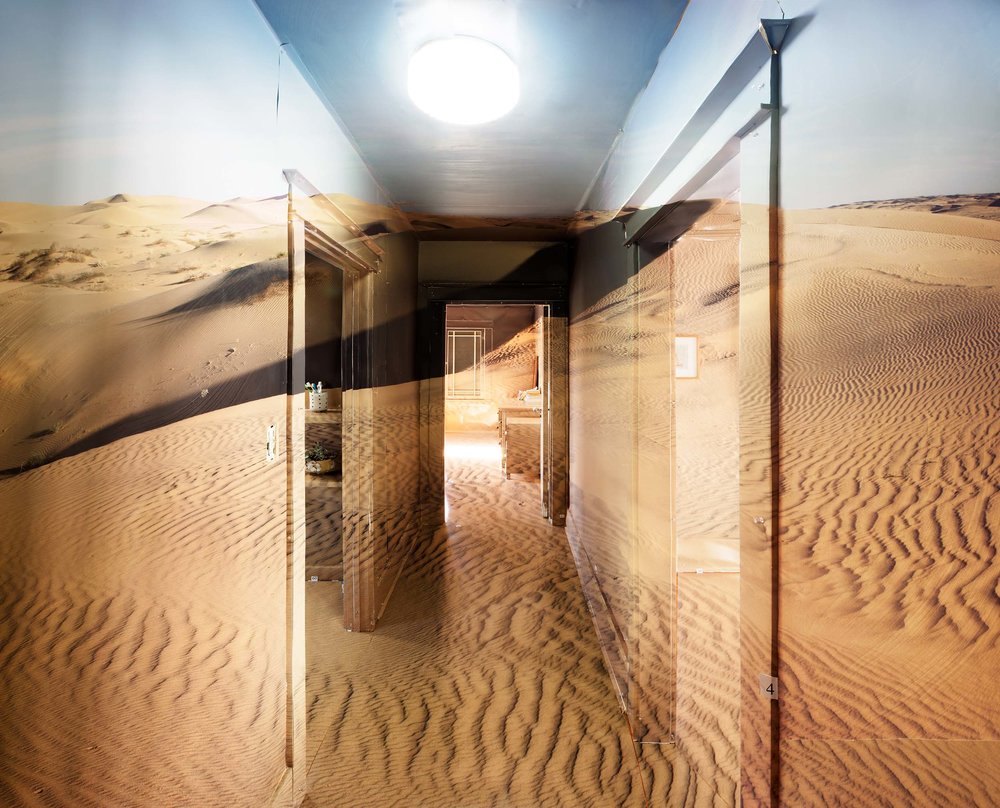 Hundreds of printed images plastered across the walls, ceilings, and floors, of several rooms allow us to physically enter the photographs, something Engman finds to be a bit of a paradox within his own work. He believes photography derives its power precisely from the fact that it can’t be entered, explaining that he tries to be mindful of this fact even as he exploits it when creating his 3D scenes.

Much of Engman’s documented work in this series has been rendered as “photographs within photographs,” in which he takes an original photo, applies it to a room, and then photographs the finished product before it’s disassembled. Recently, he extended this concept to a physical space that viewers could actually enter. “Containment for the Fotofocus in Cincinnati” takes his “Containment” piece and translates it to a purpose-built temporary structure within an art gallery, allowing for physical immersion in the art. But it’s in the tension between the safety of the built environment the adventurous, uncontrollable spirit of nature that these pieces find their greatest power. 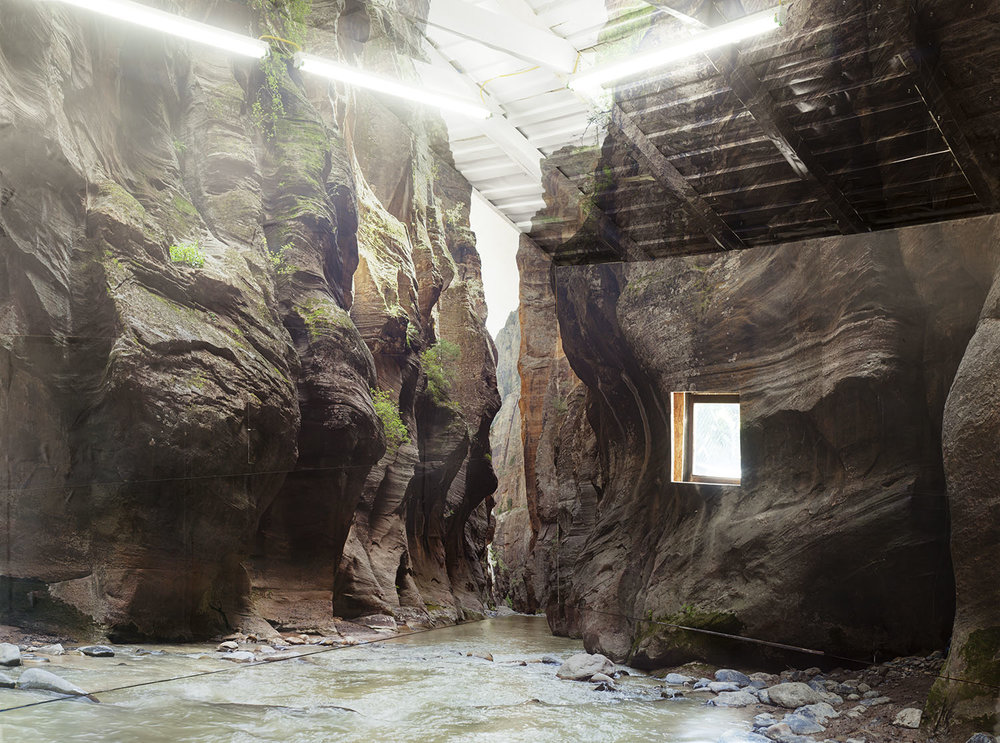 Engman adds: “In the piece titled Prospect, the combination of the ocean with the studio is a marriage of prospect and refuge and the metaphoric associations of the two. In the case of prospect these associations are adventure, excitement, and a feeling of freedom. For refuge they are safety, comfort, and a looking inwards. Prospect and refuge are not mutually exclusive in a binary sense, but they are at times in conflict with each other, and this conflict, to my thinking, is central to much of what we want and work for.”

“There is a correspondence, for me, between the prospect and refuge conflict and the tension between illusion and materiality that I see as intrinsic to the medium of photography. The latter has long been a subject of my work. By “illusion” I am referring broadly to the power we invest in photographs to tell us the truth about the world, to be a record of it, to “capture moments,” as it is said. By materiality I am referring to the stuff of photographic objects, their actual truths: ink, paper, frame, and physical context.” 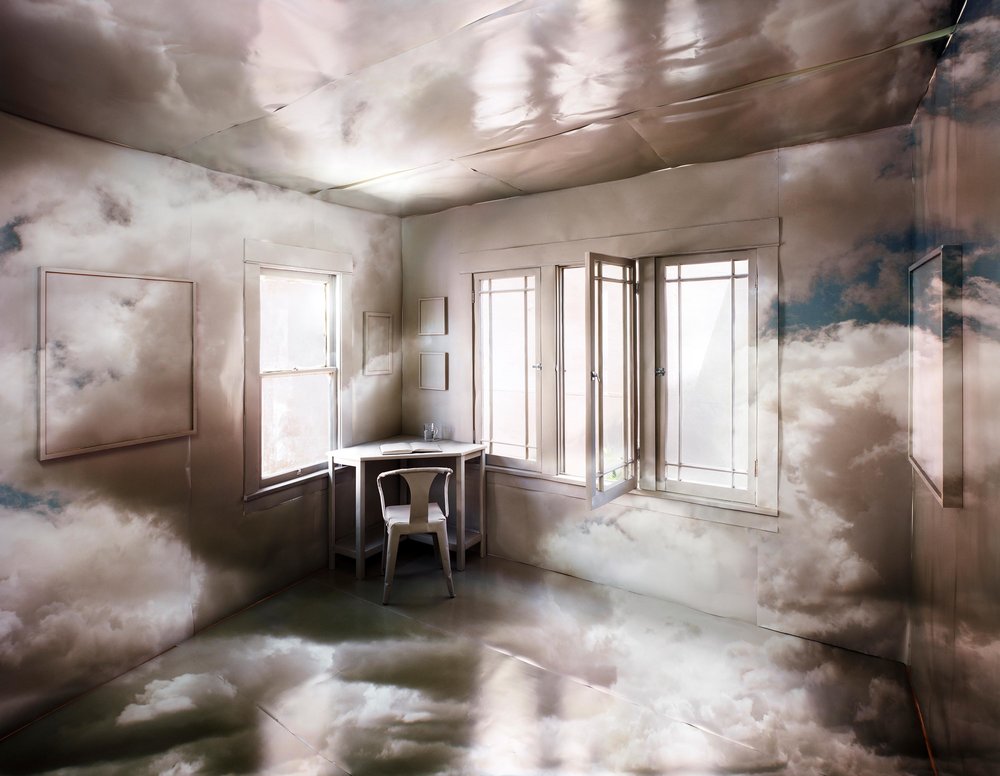 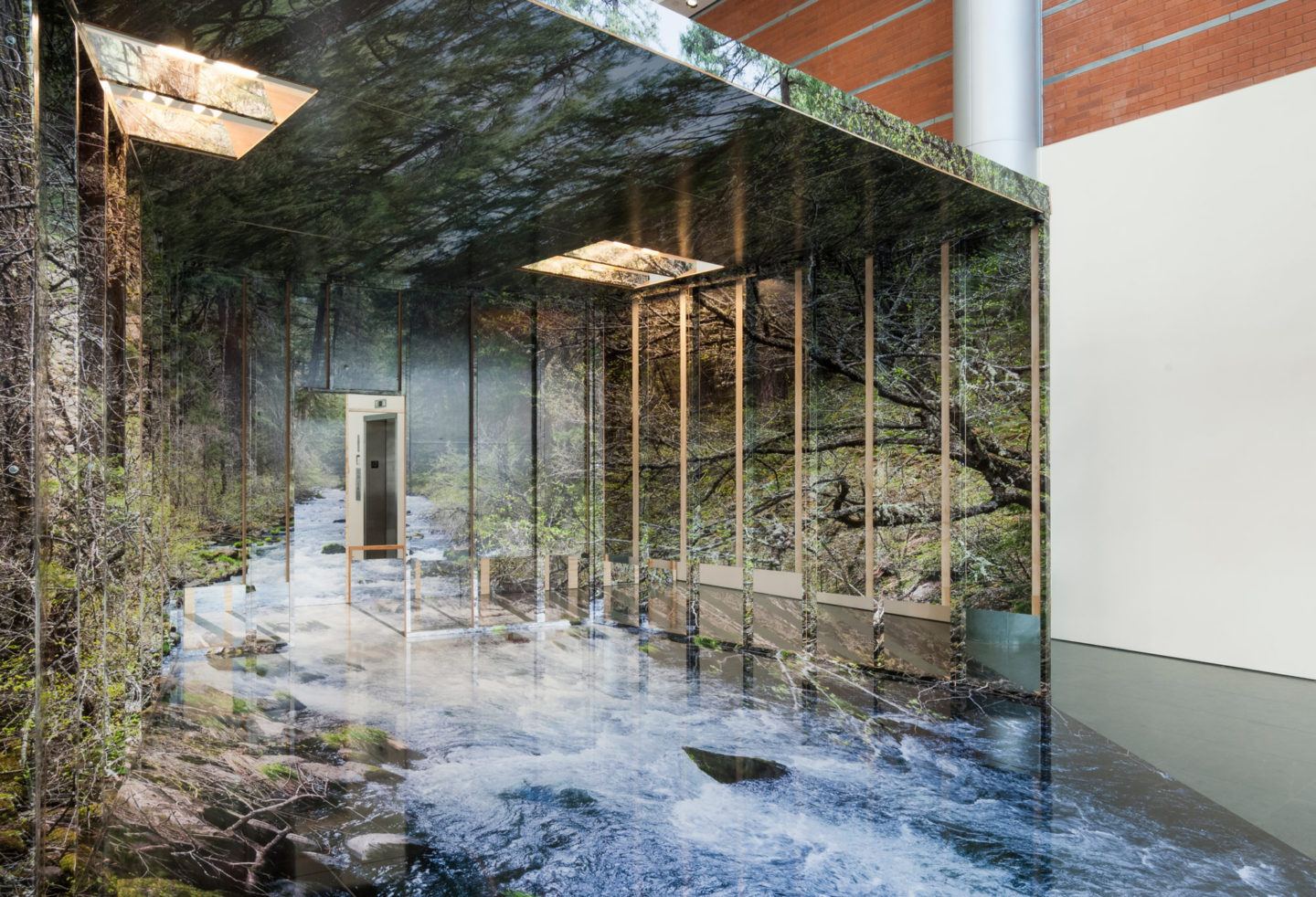 “The tension between illusion and material is exhibited in these works most notably by the different ways in which paper in used to construct images. In the piece titled Refuge, for example, the image of the wooded scene was printed onto over 150 pieces of paper and then physically cut and affixed to walls and objects within an architectural space. The room itself was then photographed and the resulting image printed onto a single sheet of photo paper. In the case of the former, the physical properties of paper are acknowledged. In the case of the latter (and this applies to the majority of photographs), everything about the presentation is designed to deny that the paper exists at all. What matters and is emphasized is the illusion, or, if you like, the lie.”