Every summer, the City of Paris turns the banks of the Seine River and the Bassin de la Villette into an outdoor recreation destination full of events and attractions like zip lines, canoes, and foosball tables. The Bassin, a manmade waterway connecting the Canal de l’Ourcq to the Canal Saint-Martin, becomes an artificial beach complete with sand and giant umbrellas, with three huge swimming pools of different depths situated right in the canal. They call the annual tradition “Paris Plages” (beaches). 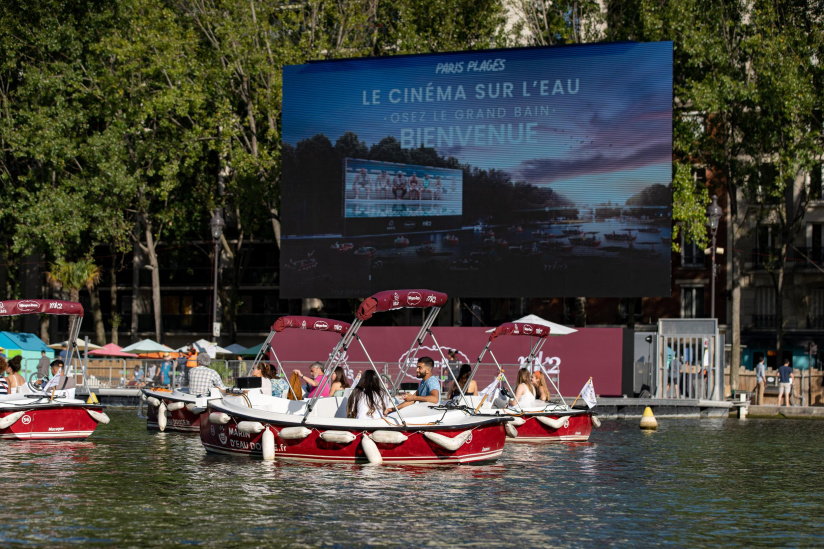 This year, for the first time ever, the city offered a free boat-in movie theater with a screen erected along the banks of the Bassin de la Villette. As you can imagine, these narrow waterways can only handle so much traffic, and demand was inevitably high. To earn a spot, hopeful movie watchers entered a raffle to reserve one of 38 electric boats operated by Freshwater Sailor. 150 deck chairs were also placed on the opposite bank for those who didn’t win.

The 2018 French film Le Grand Bain, a comedy/drama about a men’s synchronized swimming team, was selected as the first movie for the “Cinema on the Water” event, which took place on July 18th to overwheling success. The organizers partnered with MK2 Cinemas to pull off the event, with the company’s CEO Elisha Karmitz saying, “after a few months of confinement, we thought we needed a way to tell the people and to tell the world that cinemas are open in Paris, [and] that Paris is one of the worldwide capitals of cinema.”

Movie theaters have reopened in Paris at this time, but so far attendance has been low as concerns about the spread of the novel coronavirus remains. COVID-19 has killed more than 30,000 people in France so far, and some European countries fear an oncoming second wave of infections. Outdoor activities are considered fairly safe, however, so open air theaters — like the rare remaining drive-in theaters in the United States — are thriving.

In fact, Cinema Sur l’Eau is such a great idea, it would be a shame if it didn’t catch on all over the world (as weather permits), adding to other socially distanced outdoor moviegoing options that might be available right now. Paris mayor Anne Hidalgo hasn’t revealed whether or not there will be additional movies or showings on the Bassin this summer, but she did say that Paris Plages is a great way to entertain locals who currently aren’t traveling.

“Many Parisians will not go on holidays. Many visitors might come to Paris, especially visitors from other French regions rather than abroad, and we really want to welcome them and keep this festive spirit up in Paris.” 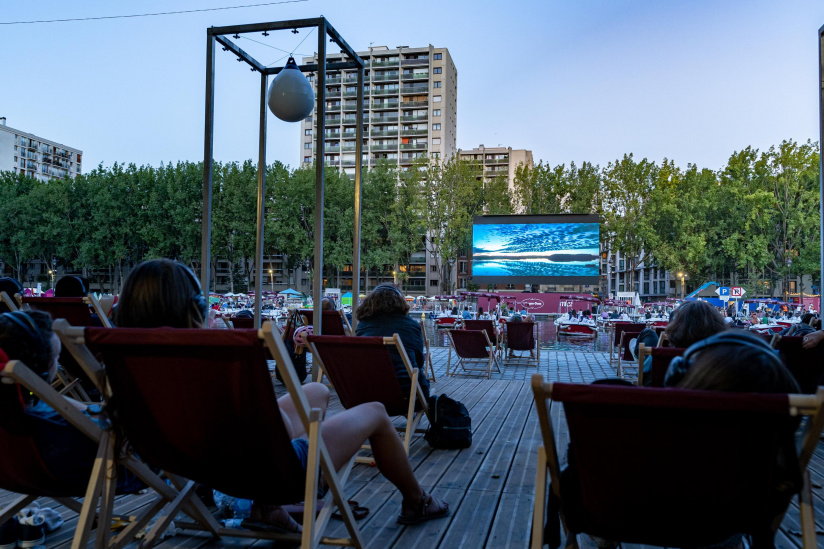 The Bassin de la Villette is the largest artificial stretch of water in the city at 800 meters (2,625 feet) long and 70 meters (230 feet) wide, and it’s not unusual to see all sorts of concerts, theater productions, and other shows there all throughout the year. Officials weren’t sure whether demand would still be high this year due to coronavirus, but it’s as popular as ever, it seems, with measures like distancing stickers on the ground and plentiful free hand sanitizer helping everyone stay safe.