As the modern world becomes increasingly dependent on technology, it seems like our devices are making it easier and easier for us to record our daily lives. Nonetheless, there are still some precious moments that we fail to capture, either because we don’t like the feeling of being on our phones all the time or because our busy schedules just don’t allow us to be 100 percent present in each activity. Luckily, there is a new product on the way that will allow us to film our most unforgettable experiences hands-free. Benjamin Button is a new clip-on camera that documents daily life from a particular point of view: your family’s. This little gadget is perfect for any parents who want to be active when spending time with their children instead of just sitting on the sidelines to record them.

Named after the acclaimed short story (and subsequent film) The Curious Case of Benjamin Button, which tells the tale of a man who ages backward, Benjamin Button is a handy camera that clips onto clothing to provide up-close footage of everyday activities. The device was developed by Berlin-based designer, husband, and father Dominik Orfanus, who wanted to create something that would solve the problem of missing out on precious family moments. After the death of his mother-in-law, Orfanus realized that time was valuable and that spending it with loved ones and creating lasting memories with them were some of the most important things a person could do. 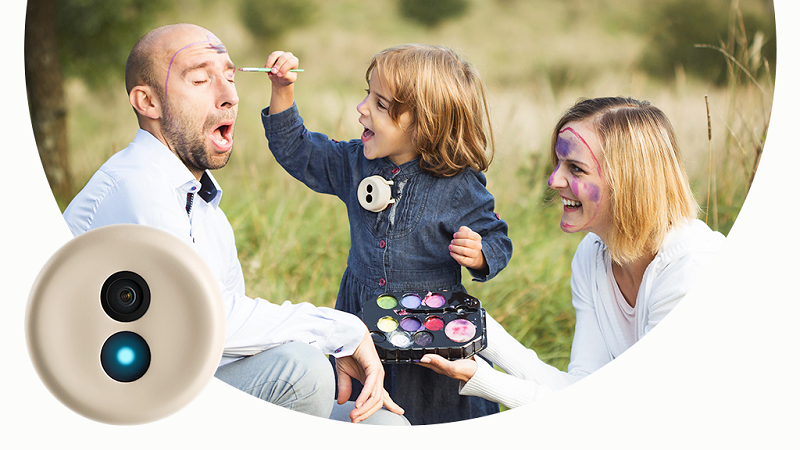 Driven by this epiphany, Orfanus created Benjamin Button. The camera is equipped with innovative software that picks out the best moments from and auto-edits recorded footage for you, allowing families to spend more time together and create even more memories. Using special face detection, sound recognition, and human activity sensors, Benjamin Button is able to expertly edit hours of footage in a matter of minutes. You’ll gain an irreplaceable piece of family history out of every recording, and you’ll never have to do anything to help make it.

Orfanus says Benjamin Button acts as a kind of “third eye” — a fitting analogy considering the camera’s ability to capture footage from inside the family unit. Typically clipped onto t-shirt collars, the button’s wide-angle lens can film events from either the child’s or adult’s perspective. Try alternating every once in a while to create a complete picture of your family life!

Compared to similar products like the Go-Pro or smartphones, Benjamin Button is far more kid-friendly. For starters, it can’t be turned on or off. Once you unplug the camera, it simply registers activity and starts recording. It also has very few small or moving parts, making it virtually child-proof. Benjamin Button has a three-hour battery life and weighs just 60 grams, meaning it can easily be worn by kids and adults alike for extended periods of time. Plus, the gadget’s subtle design will make you forget you’re even wearing it and allow you to comfortably enjoy some quality time with the family.

Continue reading below
Our Featured Videos
Benjamin Button has already raised over $50,000 USD from 149 backers on Kickstarter, doubling its initial goal of $25,000. Once it’s out in December, the device will be available in three different colors. Based on the overwhelming public support it’s garnered, it’s safe to say that Benjamin Button is the camera your family didn’t know it needed.