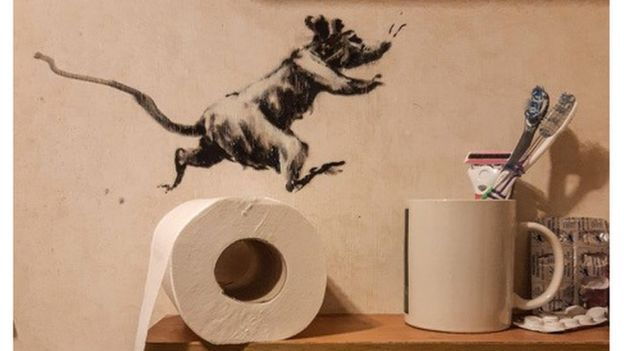 Banksy’s been labeled a lot of things before: vandal, film director, activist, and graffiti-ist, depending on whose perspective is on display. But one title everyone can agree on is artist. Spanning across alleyways, streets, walls, and bridges around the world, but mostly recently throughout the London districts of Bristol and Birmingham, Banksy’s art explores a range of topics. His style is distinct, with elements of stenciling and a full dose of political and lifestyle satire.

Although Banksy has had his work featured in major exhibitions and offers people means of buying his work privately, his identity remains a secret, which is just the way he prefers it since his expression of art through graffiti is oftentimes illegal. He doesn’t have Facebook or Twitter accounts, but he does share his art via Instagram, which is the only way the world knows what his bathroom looks like during quarantine. 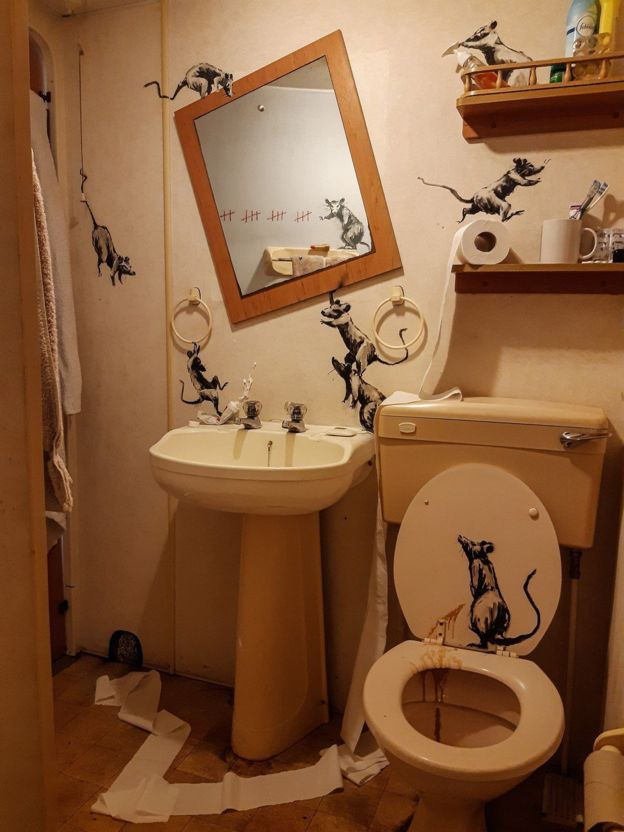 In a recent post, the artist noted that: “My wife hates it when I work from home,” with images of nine of his frequently-seen rats being naughty in the small bathroom. Working together, two rats appear to knock the wall mirror off kilter. A closer look sees a partner in crime marking tallys on the mirror’s glass while a fourth rodent peers down from the top. Perhaps they’re keeping track of their total days in isolation? 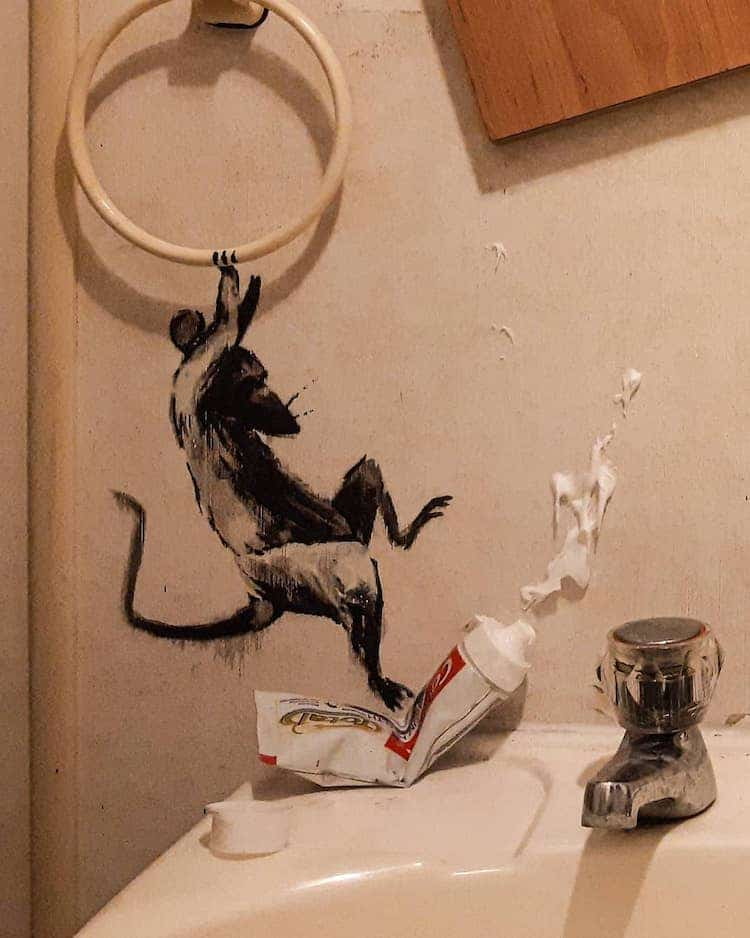 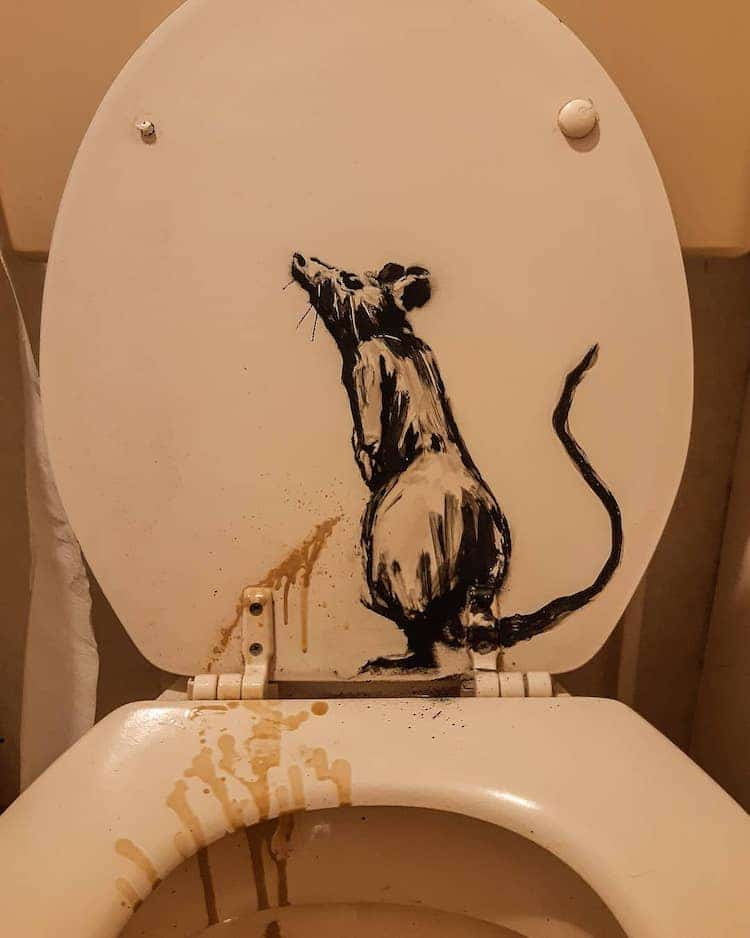 While much of his work has sharply increased in value over time, including “Devolved Parliament,” a piece depicting chimpanzees in parliament that recently sold for $12.1 million, Banksy’s bathroom art will only be available for viewing online.

The elusive artist has a sorted past in the art world, first surfacing in the 1990s alongside other prominent street artists Kato and Tes. Together, the three adopted the moniker DryBreadZ Crew (DBZ). Over time, he was noticed by photographers, one of which later became his agent. Increasing in popularity, numerous original Banksy works have been removed from public locations and sold to private owners. Others have even listed photographs of his work for sale without Banksy’s permission.

Regardless of where each piece might be, the bulk of them incorporate a kind of anti-war, anti-capitalist, or anti-establishment theme. However, as recently as Valentine’s Day, a sweet and romantic image appeared to his credit of a young girl using a sling shot to spray flowers into the air. Unfortunately, the piece was vandalized, so photographs are really all that remains. 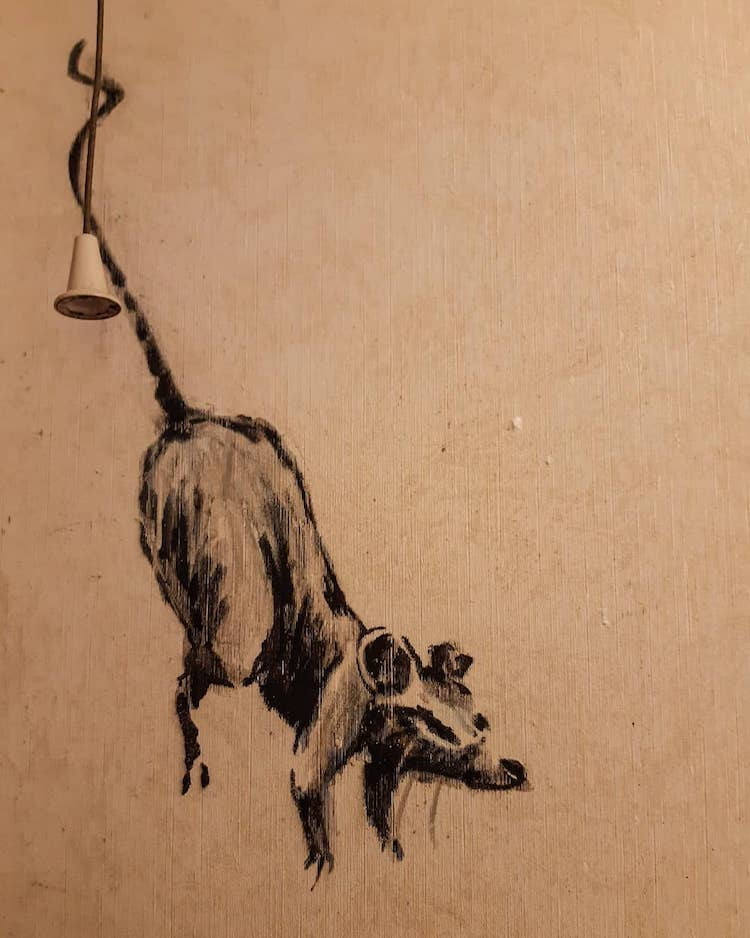 Although “underground,” Banksy keeps in touch with the world regarding his work, and is obviously using his time indoors to share a bit of his creative genius and a bit of much-needed humor, too.