If we’re ever going to succeed at cleaning up the mess we’ve made in the world’s oceans, we have to start with the rivers that feed them. About 1,000 waterways across the globe are responsible for 80 percent of the plastic and other trash that ends up in the oceans, contributing to massive floating gyres like the Great Pacific Garbage Patch. 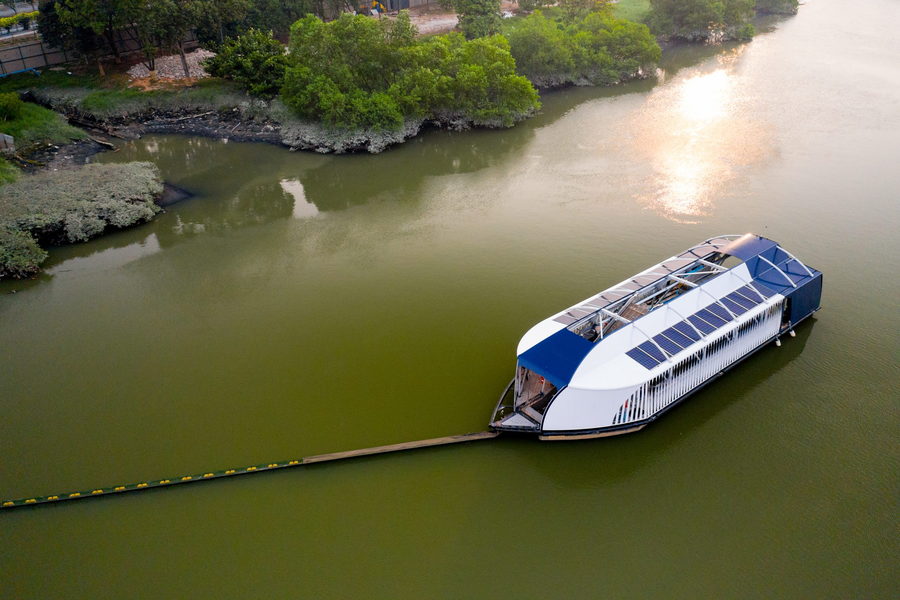 Right now, autonomous solar-powered vessels called Interceptors are doing just that. Created by nonprofit organization The Ocean Cleanup, these “floating garbage trucks” are designed to scoop waste out of rivers using a long floating boom. The Interceptors are anchored to the riverbed, and plastic trash guided into openings on their fronts is loaded onto a conveyor belt that in turn collects it into bins. When those bins are full, sensors notify local operators, who empty and replace them, and send the waste to local facilities for processing. 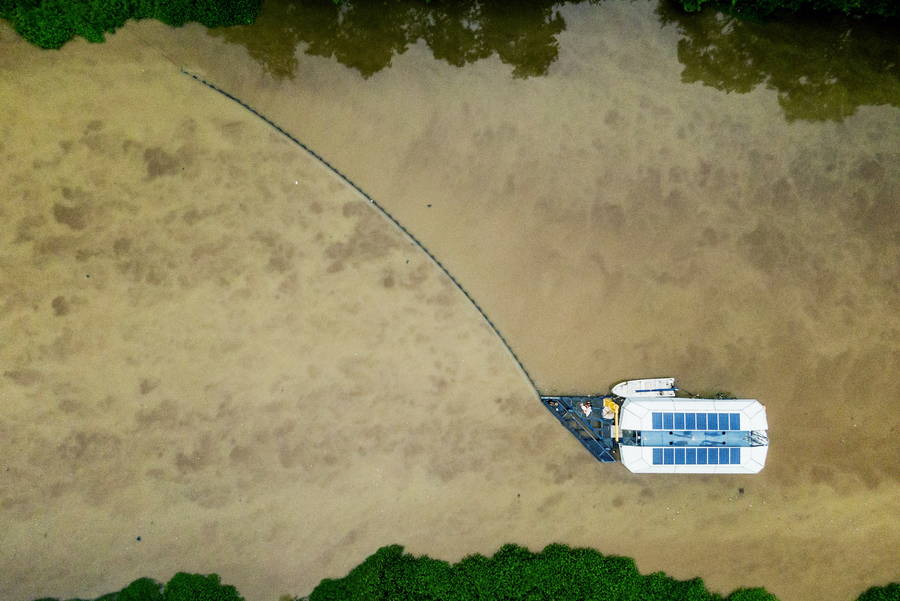 This automation is part of what makes the project so promising. The system is highly efficient, already having proven effective at fishing micro-plastics as small as a millimeter in size out of the water. After testing the first design, the Interceptor 1.0, The Ocean Cleanup’s engineers developed a new model with simpler parts, the ability to collect larger volumes of litter, and greater stability in the water, protecting against accidental spills.

Video of the Interceptor at work in Malaysia shows just how well it does its job. An astonishing amount of trash passes over the conveyor belt almost constantly, including cups, straws, packaging, and even shoes. The trash collectors operate 24 hours a day, seven days a week, extracting over 110,000 pounds (50,000 kilograms) each day. Catching all of this manmade debris before it reaches the oceans solves a critical problem with ocean cleanup that occurs in the actual oceans: accidentally capturing marine life along with all the trash.

Three Interceptors are already in place in Malaysia, Indonesia, and the Dominican Republic, with a fourth set to be installed in Vietnam early next year. The Ocean Cleanup hopes to tackle the 1,000 most polluting rivers worldwide within a five-year period, with an ultimate goal of removing 90 percent of all floating plastic by the year 2040. They’re working with manufacturers around the world to roll out more Interceptors, and constantly refining new generations of the design using what already they’ve learned. 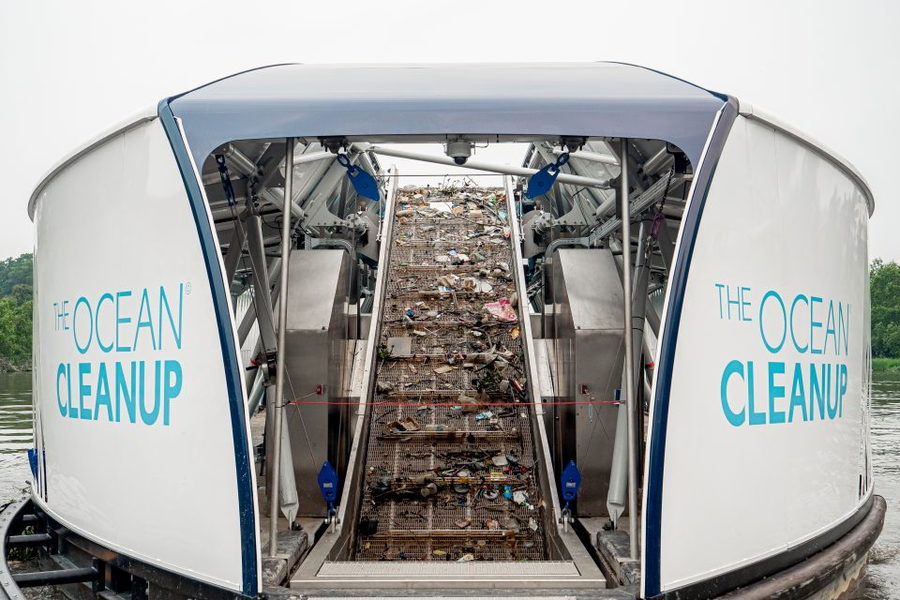 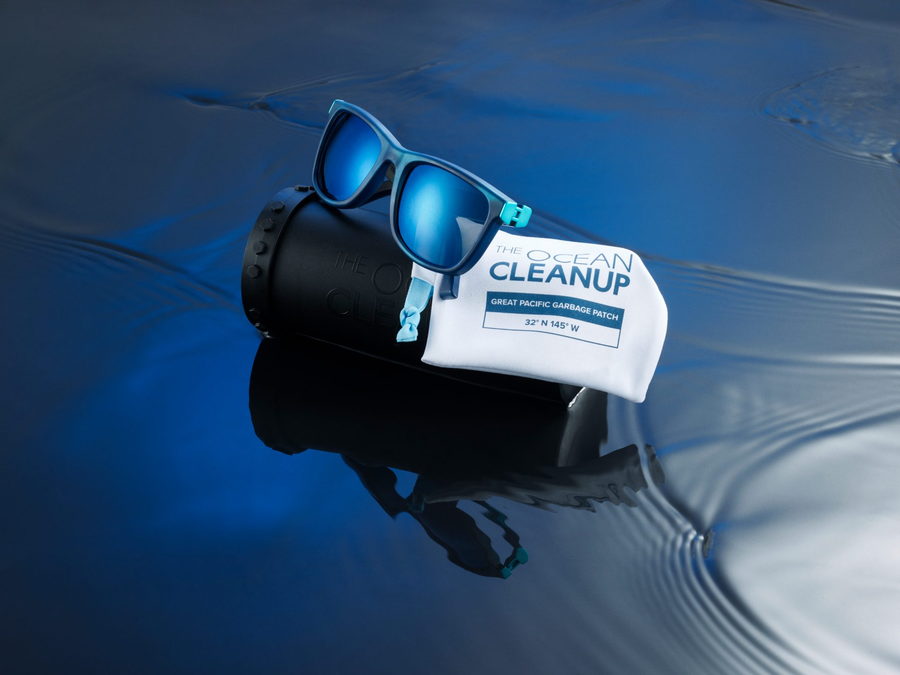 Recycling the plastic it recovers from waterways is an essential part of The Ocean Cleanup’s vision. In October 2019, the project made its first foray to the Great Pacific Garbage Patch, and while hiccups and delays prompted a redesign and redeployment in 2020, the barriers are successfully gathering trash that’s now being transformed into products like sunglasses designed by Yves Béhar.

“100 percent of the proceeds from the sales of these sunglasses will go directly to continued cleanup operations. When we return to the patch, because of your support, we estimate that we can clean an area equivalent to 24 football fields of the Great Pacific Garbage Patch from the proceeds of just one pair of sunglasses. If we sell every pair, that means we could clean half a million football fields worth of ocean.” 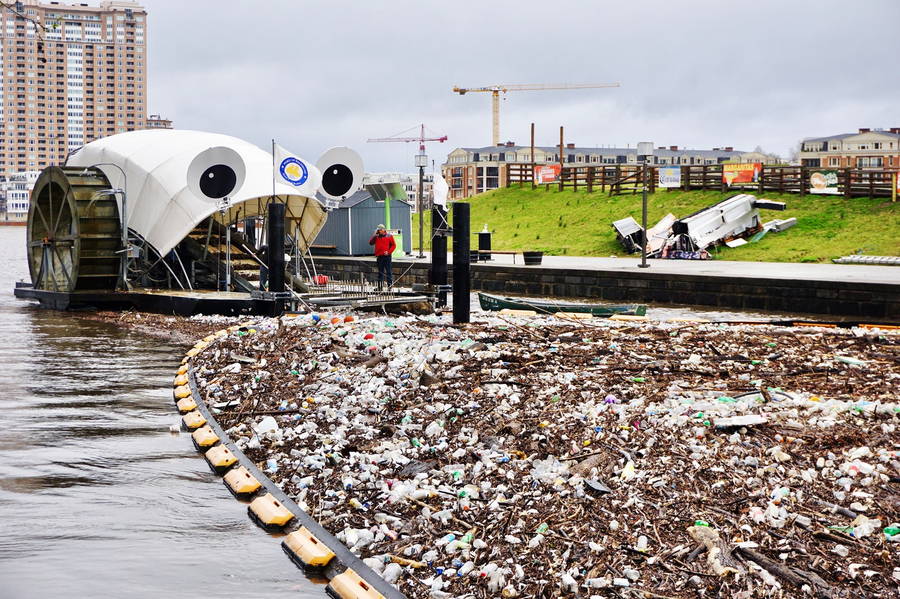 If all of this already sounds familiar to you, that’s probably because the concept existed before The Ocean Cleanup’s Interceptors came along. In Baltimore, a trash-eating barge called Mr. Trash Wheel has been in operation since 2008 using almost the exact same process, but with the fun addition of googly eyes.