Shortly after he decided to tell the story of the refugees fleeing Syria by creating sculptures out of pebbles from his local beach, Nizar Ali Badr started sharing photos of his art online. His posts attracted the attention of Latvian violinist Gidon Kremer, who in turn reached out to Georgian animator Sandro Kancheli to turn these stills into moving pictures. Kremer would go on to compose the original score for “Pictures of the East,” a short film that brings Badr’s pebble people to life. 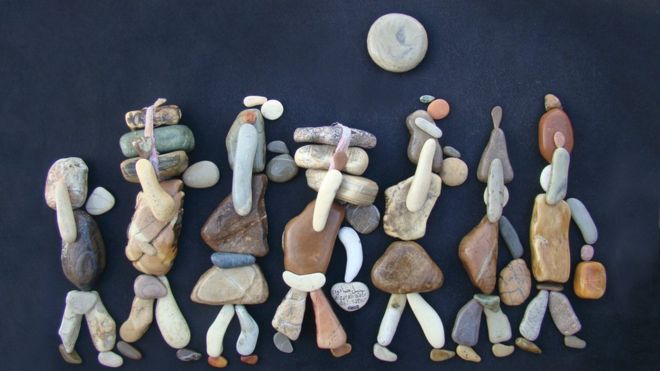 Badr’s sculptures are so poignant that they strike compassion into almost everyone who beholds them. After all, what could be more reminiscent of innocence and childhood than the pebbles on a beach? When they’re used to depict Syrian refugees leaving their homes and struggling to survive in foreign countries, the stones take on a tone of simultaneous hope and despair. 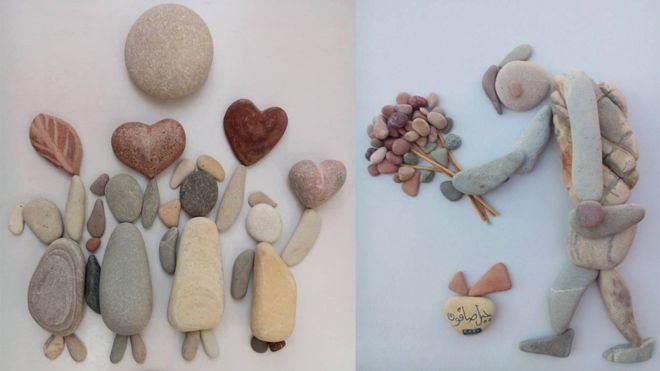 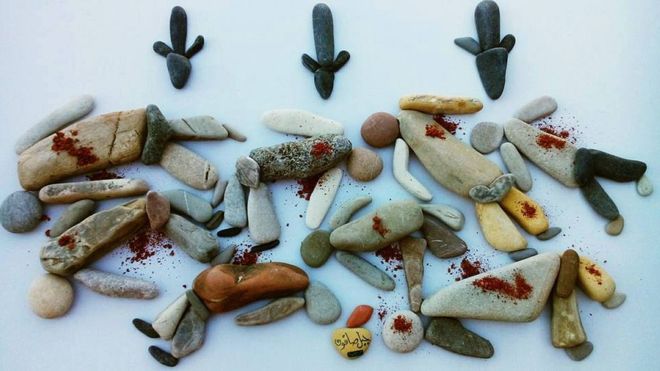 Many migrants lose their lives at sea. In a way, the seashore itself provides the perfect metaphor for life’s temporary nature: the tides ebb and flow, bringing water onto the shore for an instant only to take it away again. In recent years, images of refugees drifting in the middle of the ocean or enduring some other unimaginable hardship have become all too familiar. A woman cradling her child — dead, or still breathing? Families carrying the few belongings they have left in bundles on their backs. A man that’s been hanged. All of these events are really happening, but when we see them on the news every day, we become desensitized to these people’s pain and suffering.

The 52-year-old’s sculptures are simple enough for anyone to understand and remind us that these refugees are more than just clips and sound bytes. They’re human beings with their own sets of hopes, dreams, and fears. When combined with Kremer’s music and Kancheli’s animation, Badr’s art becomes a poetic tribute to the desperation and heroism shown by ordinary people in the face of a dangerous and extraordinary situation. 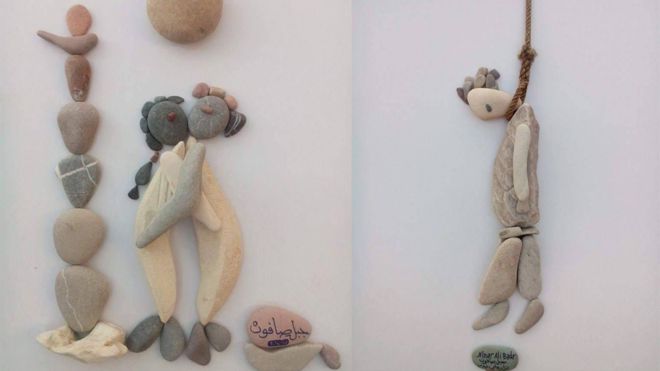 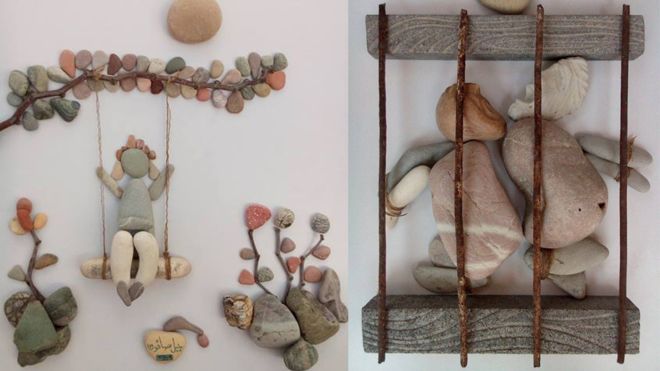 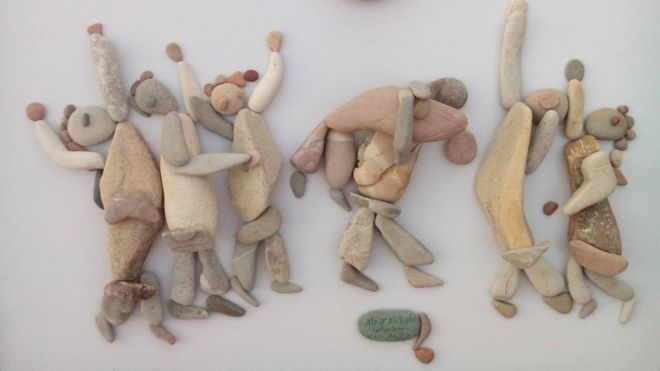 For the last 35 years, Badr has gone to the beach in his hometown of Latakia to collect pebbles of different shapes, colors, and sizes. Initially, it seems like he was the only person who even knew about his art! He told the BBC: “I didn’t have a camera to record any of my work. As soon as I finished, I looked at it for some time and then destroyed it to make a new one.” 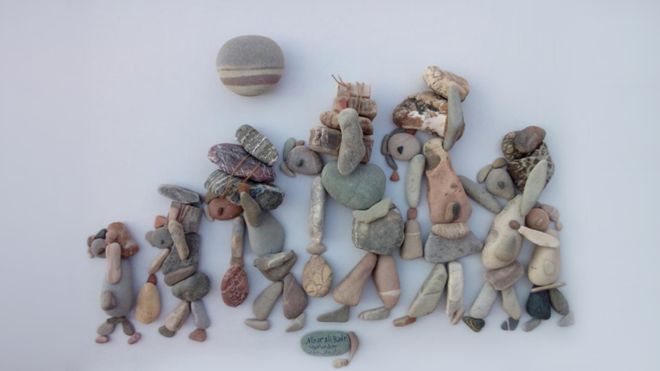 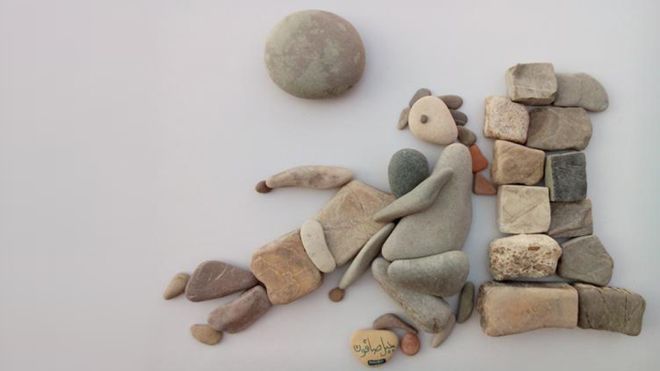 Eventually, Nizar started gluing his tableaux onto cards. When glue became too expensive, he finally got his hands on a camera. He explains: “I take photos of the artwork. This is the only way to preserve them and make sure people will see them. My only consolation is the work I do and therefore I don’t see it as a source of revenue. It is pure passion for stone art. I want to communicate human emotions that people everywhere in the world share, such as love, hope, and sadness.” 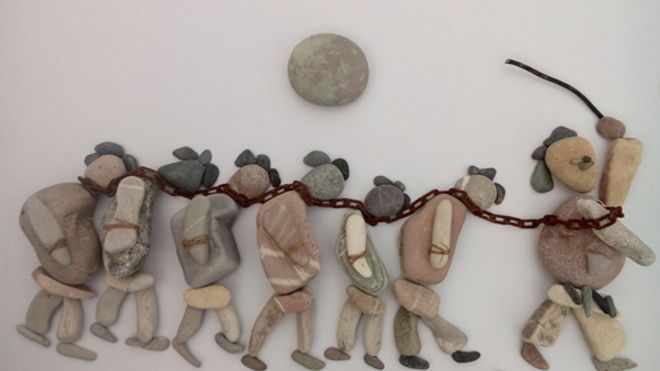 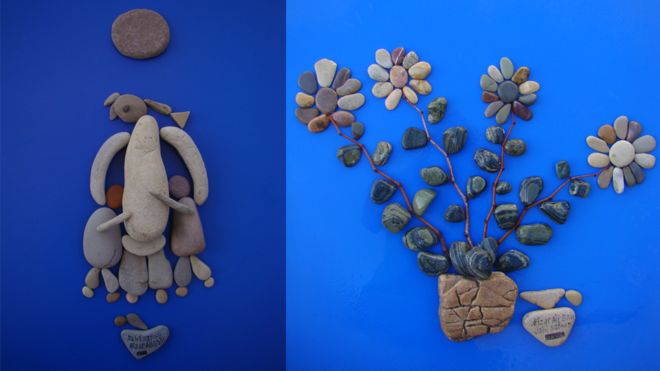 Clearly, this visionary artist and sculptor has already inspired several others to help him tell the displaced Syrian people’s story. It looks like the French philosopher Blaise Pascal was right when he said “The entire ocean is affected by a pebble.”