Italian sculptor and set designer Edoardo Tresoldi has created a new installation using his characteristic wire mesh in the prestigious Parisian department store Le Bon Marché. Tresoldi, who is known for using wire mesh in his sculptures to create a dialogue between art and the world at large through the material’s transparency, has suspended the pieces of his work “Aura” from the store’s glass ceiling so that they hang down into the atria between various floors and rows of intersecting escalators. 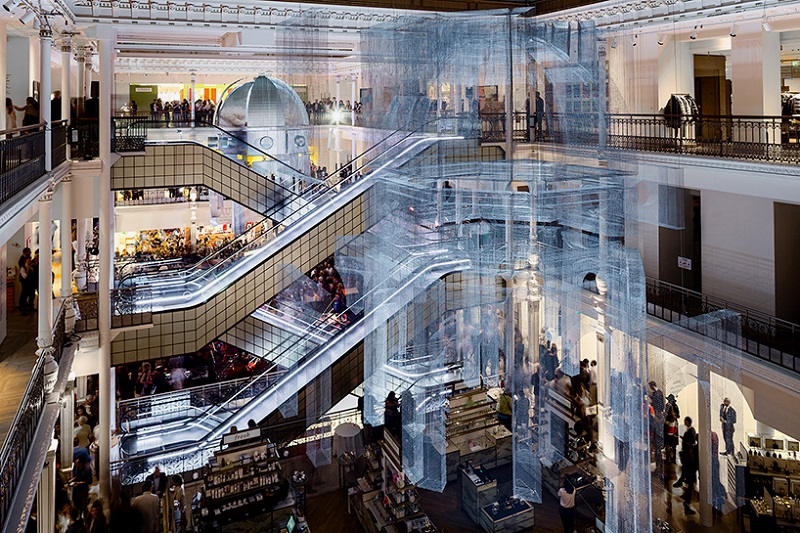 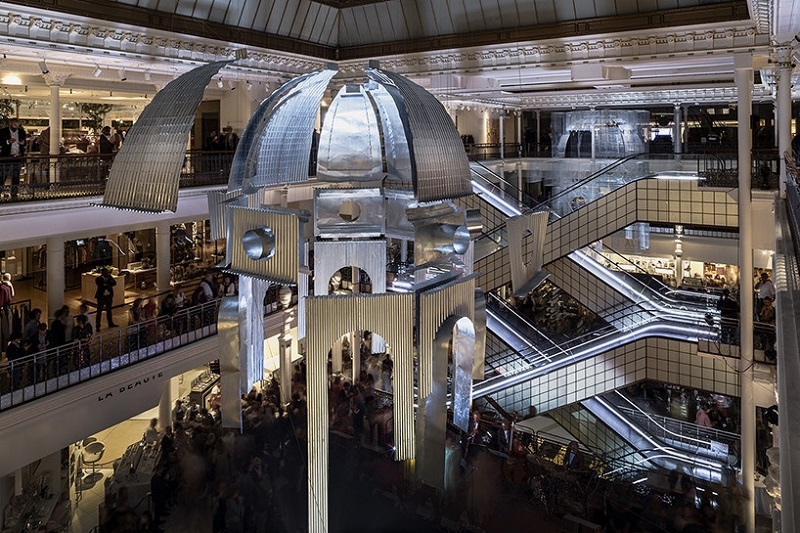 The installation, which is an homage to architectural ruins, is made up of two works, both of which were inspired by Neoclassical architecture. Each work consists of a large dome typical of the Italian Renaissance, but one is constructed in Tresoldi’s typical mesh, while the other is made from sheets of corrugated metal (a material first for the artist). While they are almost identical in form, the contrast between the execution of each work is remarkable. On the one hand, the mesh wire plays with opacity, forming the structure of the dome while simultaneously allowing it to appear porous and other-worldly. On the other hand, the corrugated metal dome is formed from panels that have been pulled away from one another, echoing an axonometric drawing typical of architectural drafting. 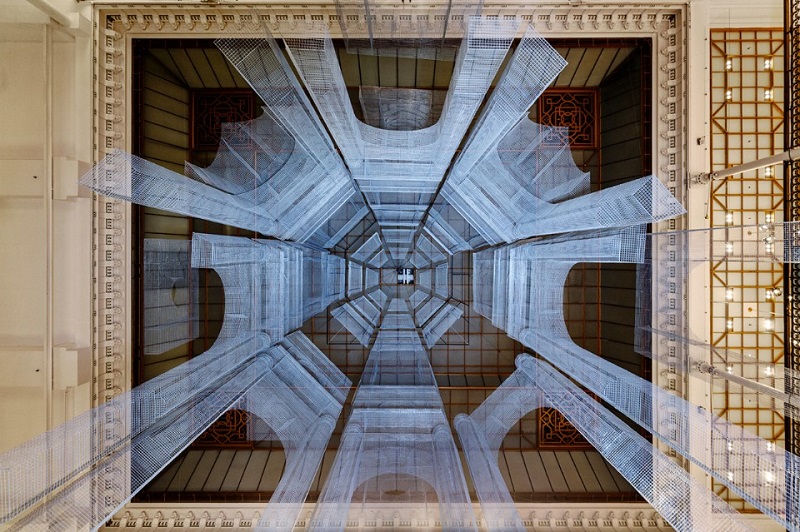 The ghostly appearance of the two sculptures both highlights and obscures the architecture of the 19th-century building in which they are sited. The installation speaks to the passing of time, and this discourse is even more pertinent when considering the geographical transcendence in siting Italian architectural ruins in a French building constructed in the 1800s. The boundaries of what is built and what is in ruin become blurred, and the sculptures imbue the space with an ethereal quality (as most of Tresoldi’s works do). As such, the title “Aura” is more than appropriate, as the installation allows the visitor to examine the works, their surroundings, and themselves in relation to the past, present, and future. 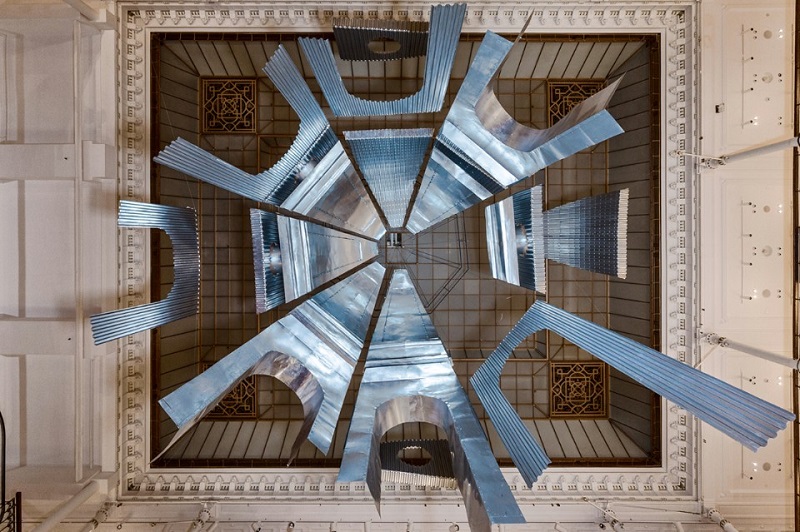 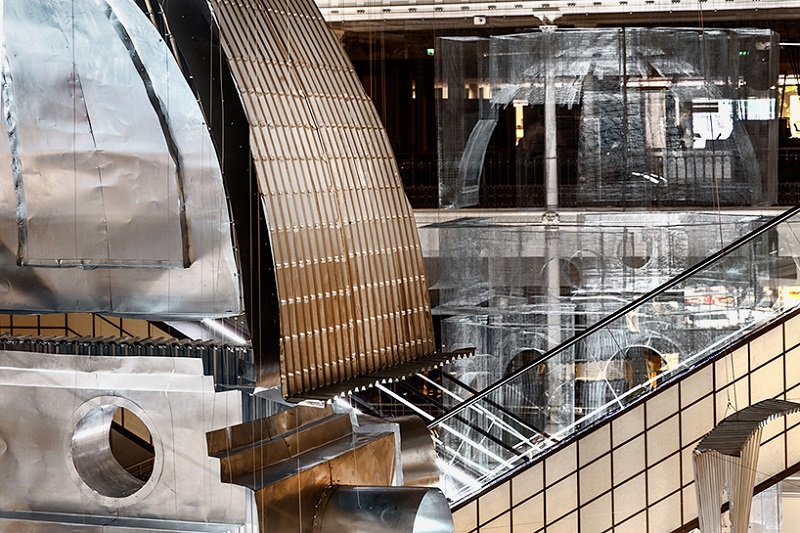 Both domes have a simple-yet-powerful energy and distort not only the physical spaces around them, but also our perception of them. The pieces — particularly the corrugated metal work — imply disintegration in their respective uses of transparency and extrusion. Tresoldi has said that the purpose of the installation is to get people thinking about the spaces they are in, and the juxtaposition of the wire-frame structures and the solidity of the department store forces us to compare the two in our heads. 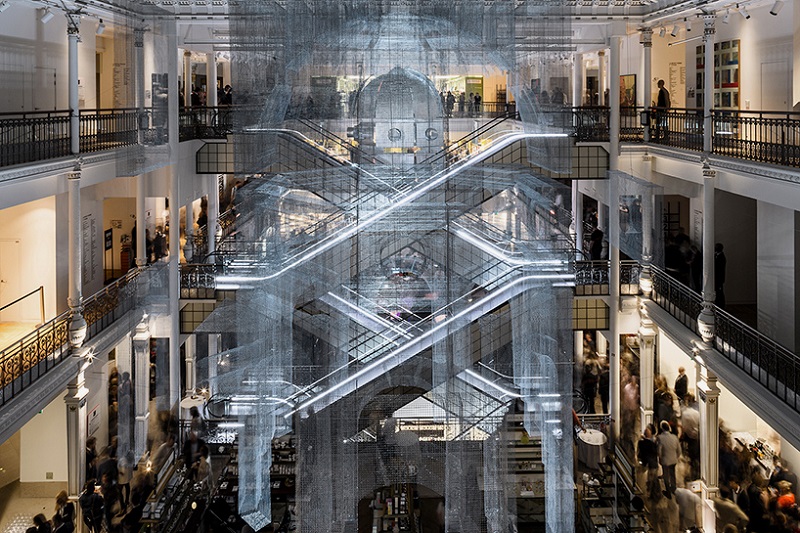 Continue reading below
Our Featured Videos
Tresoldi is not the first artist to take over Le Bon Marché’s atria. Chinese provocateur Ai Weiwei previously installed a work entitled “Er Xi,” which translates to “Child’s Play,” into the department store. That installation portrayed ancient Chinese characters from 2,000-year-old children’s stories constructed from paper over bamboo frames. Like Tresoldi’s works, Weiwei’s installation bore an ethereal quality. Japanese artist Chiharu Shiota also transformed the atria with ghostly forms in her installation “Where Are We Going?,” which saw 150 woven boats suspended from the store’s iconic glass ceiling, which was originally designed by Gustav Eiffel in 1872.