It may just be a giant rock orbiting our planet, but the moon has had a massive impact on Earth, both through its gravitational influence, which fuels our ocean tides, and the deep symbolic significance it has taken on in our cultures. We only ever see one face of it from our terrestrial viewpoint, and given that it only glows because of a reflection from the sun, it’s easy to see why it’s retained such a dark and mysterious quality. Its unflinching beauty through all of its phases and reddish-tinged drama during a lunar eclipse have inspired many myths and tales throughout human history. Despite the fact that many of those myths have given way to scientific realities, we still revere it all the same. 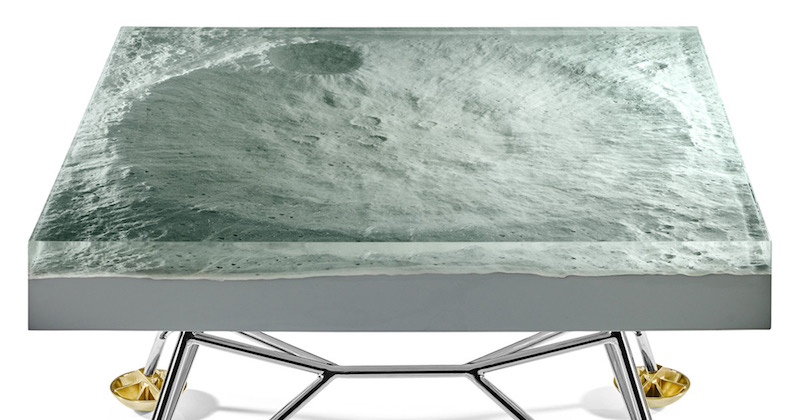 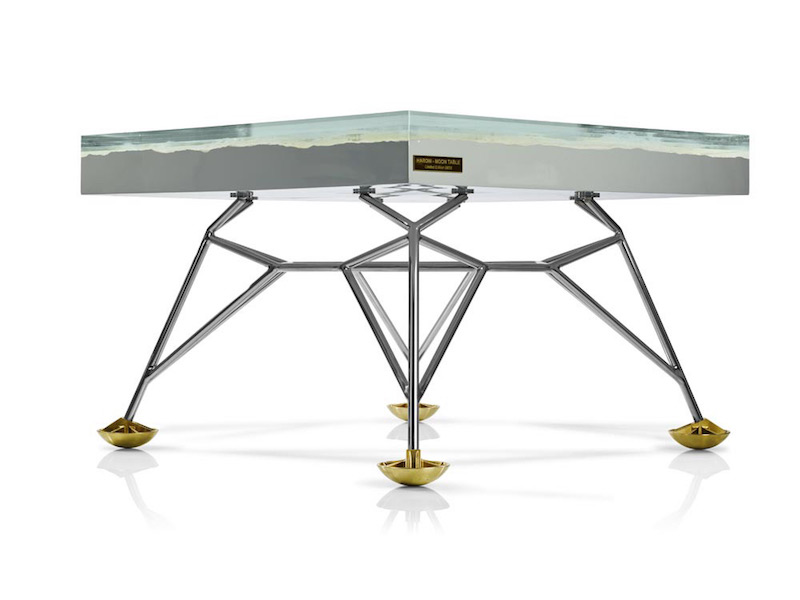 A new table by French design studio Harow brings a little bit of that mystery into the home in the form of a striking resin and fiberglass table. Named after the famous 1969 NASA mission, the APOLLO 11 Table is a piece of functional sculpture that invites us to look closely at the moon’s surface and marvel at its complexities. You might even examine it long enough to find a tiny footprint on it, left behind as evidence of our presence there.

The designers used digital files from NASA’s archives to create the most accurate possible representation of the surface, which they describe as “an artistic and poetic landscape.” They sculpted the craters on a slab of fiberglass and poured transparent resin on top, allowing light and shadow to highlight the topography of the piece. Even the brass feet reference the original landing pads on the Lunar Excursion Module. 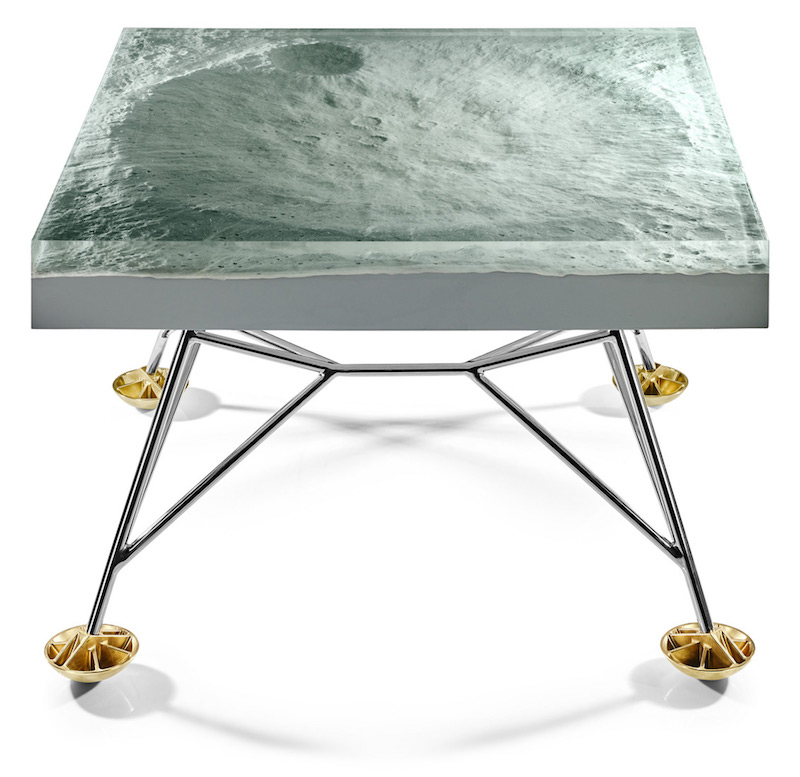 The company website reads: “The physico-chemical, dynamic, and thermal properties of this resin require a regular delay between each layer for perfect polymerization, and the creation of the slab demands a confined and sterile environment. The feet, a contemporary representation of those of the LEM module, require precision manufacturing. Each piece is sculpted to the micro-millimeter, delicately and directly from the block, which is composed of a brass and aluminium alloy.” 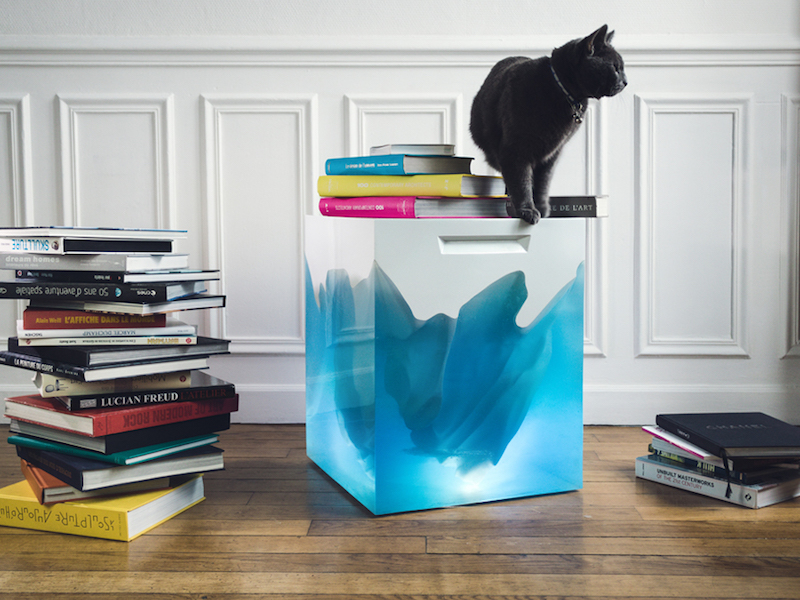 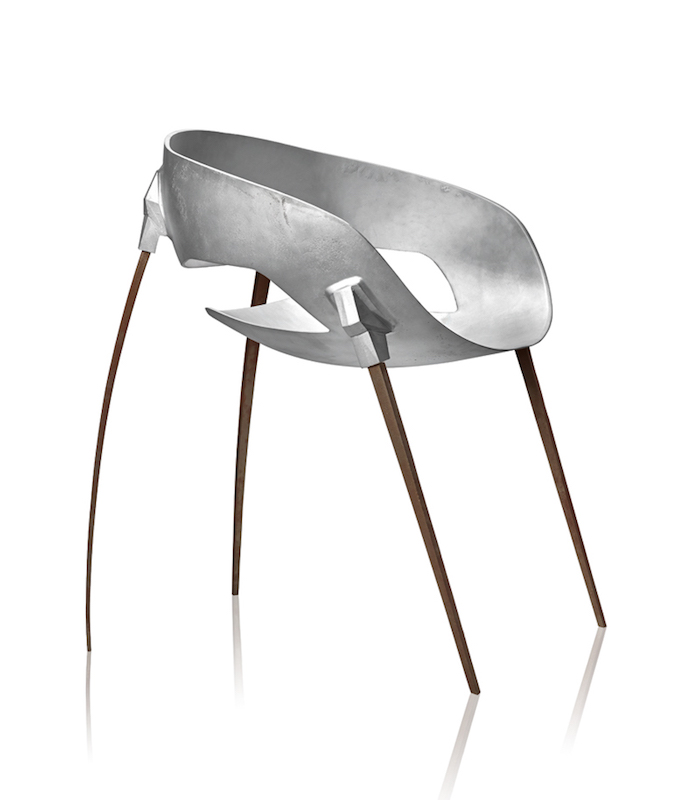 Harow also produced a series of limited edition APOLLO landscapes for mounting on vertical surfaces and a few futuristic-looking creations like a resin and fiberglass Iceberg stool & side table, a gold “ICONIC” stool immortalizing Arnold Schwarzenegger’s face, and a highly unusual chair that complements the APOLLO’s theme: the award-winning SPUTNIK.

Of the latter, Harow says: “A steel and aluminium structure, the SPUTNIK chair theoretically insists on the simplicity of its conception, materials, and inspiration. Over the course of its development, the Soviet archives on the OKB-1 were an object of study, along with technical points such as how to honor the exact dimensions of the satellite so that its reincarnation as a seat and functional chair could meticulously respect the dimensions of the source.” 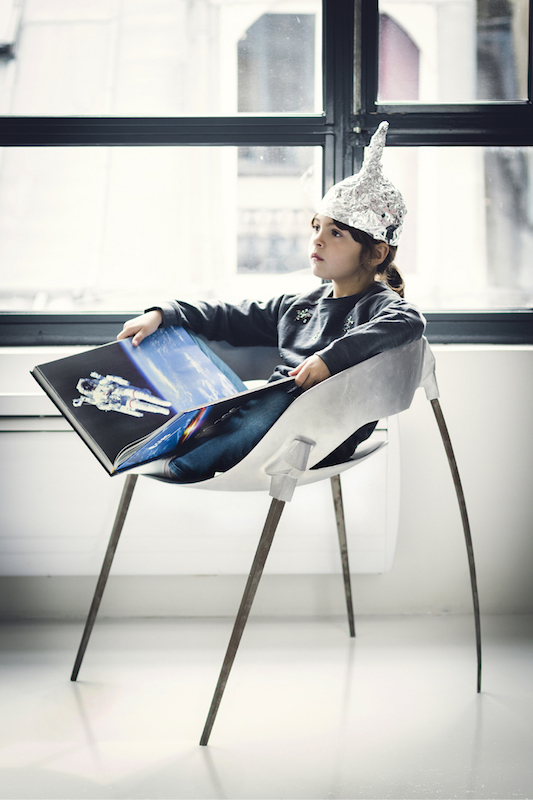 “However, the Sputnik chair is no less complex as a triumph of smelting and an assembly of steel and aluminium. The different melting points of the composite materials require highly technical brazing, chemically-set sandblasting, and a polyurethane process, guaranteeing a faithful reproduction of the shapes and an immaculate appearance of the pieces.”