While the bulk of 17th-century Dutch art celebrated the opulence and abundance of the time, there was a sub-movement that flipped that message on its head. Those paintings about futility from the 1500s and 1600s inspired British artist Ann Carrington to invent her own unique tribute to those early creatives. 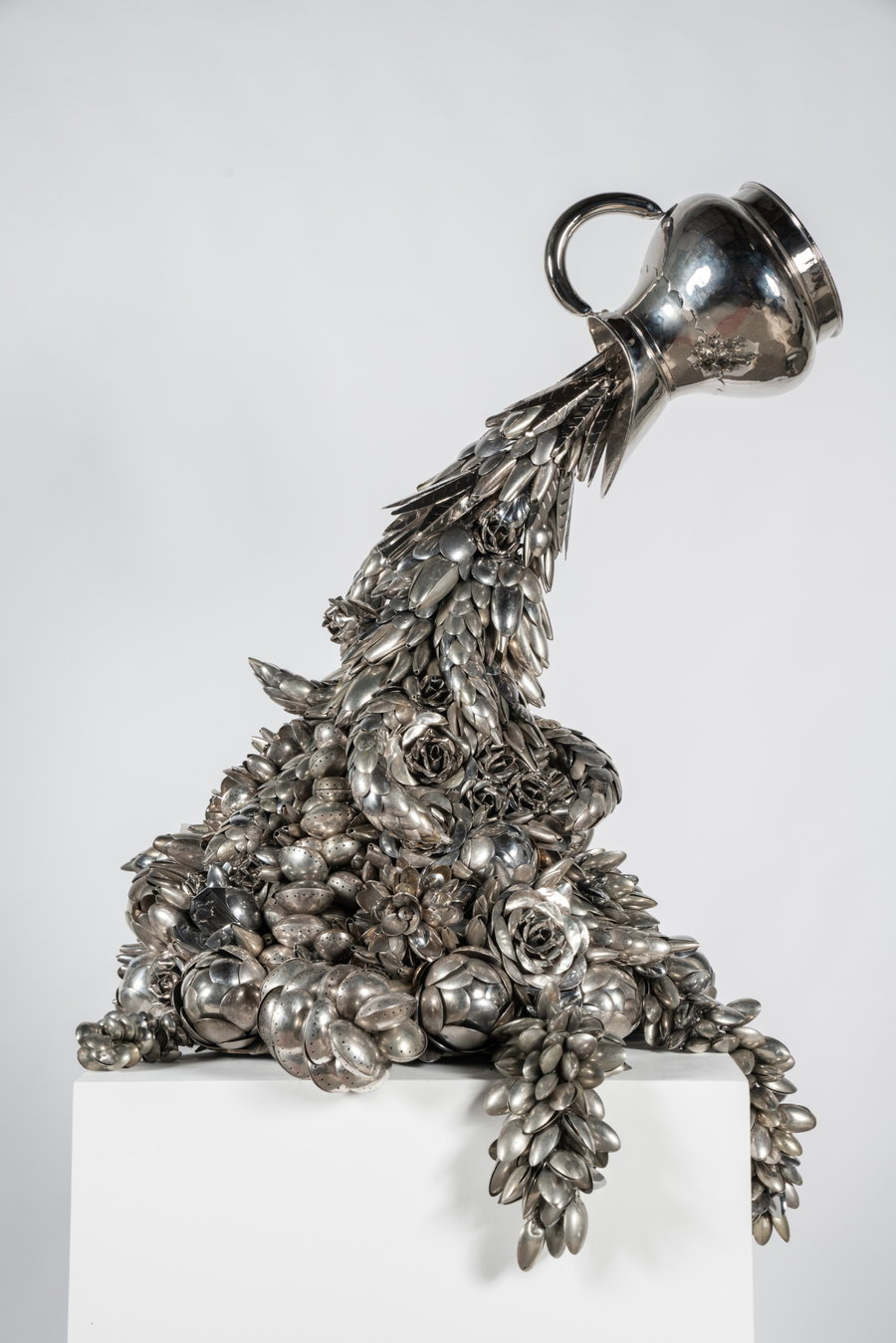 Known as Vanitas, the genre focused on the futility of seeking wealth, power, and earthly pleasures, as it ends the same way for everyone: death. Carrington found the idea intriguing when she visited the Rijksmuseum in Amsterdam a few years ago. 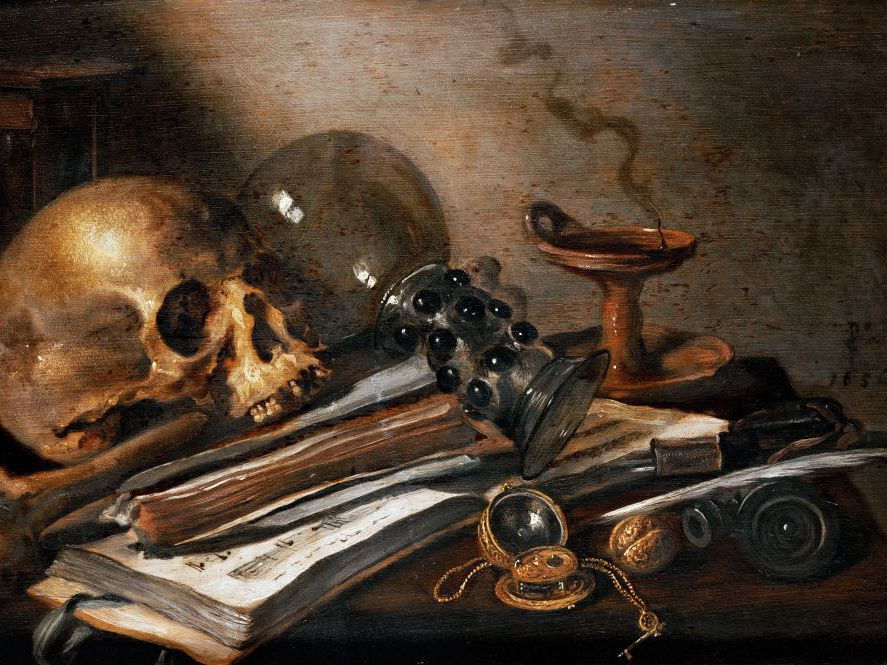 “I’ve always been attracted to the tradition of ‘memento mori,’ art that reminds us of the passing of time,” Carrington said in a recent interview. “In looking at those pictures of half-consumed food and fading flowers, I realized that one of the only things that could have survived to today was the silverware, and I thought, ‘Wouldn’t it be fun to try to make something out of that?’” 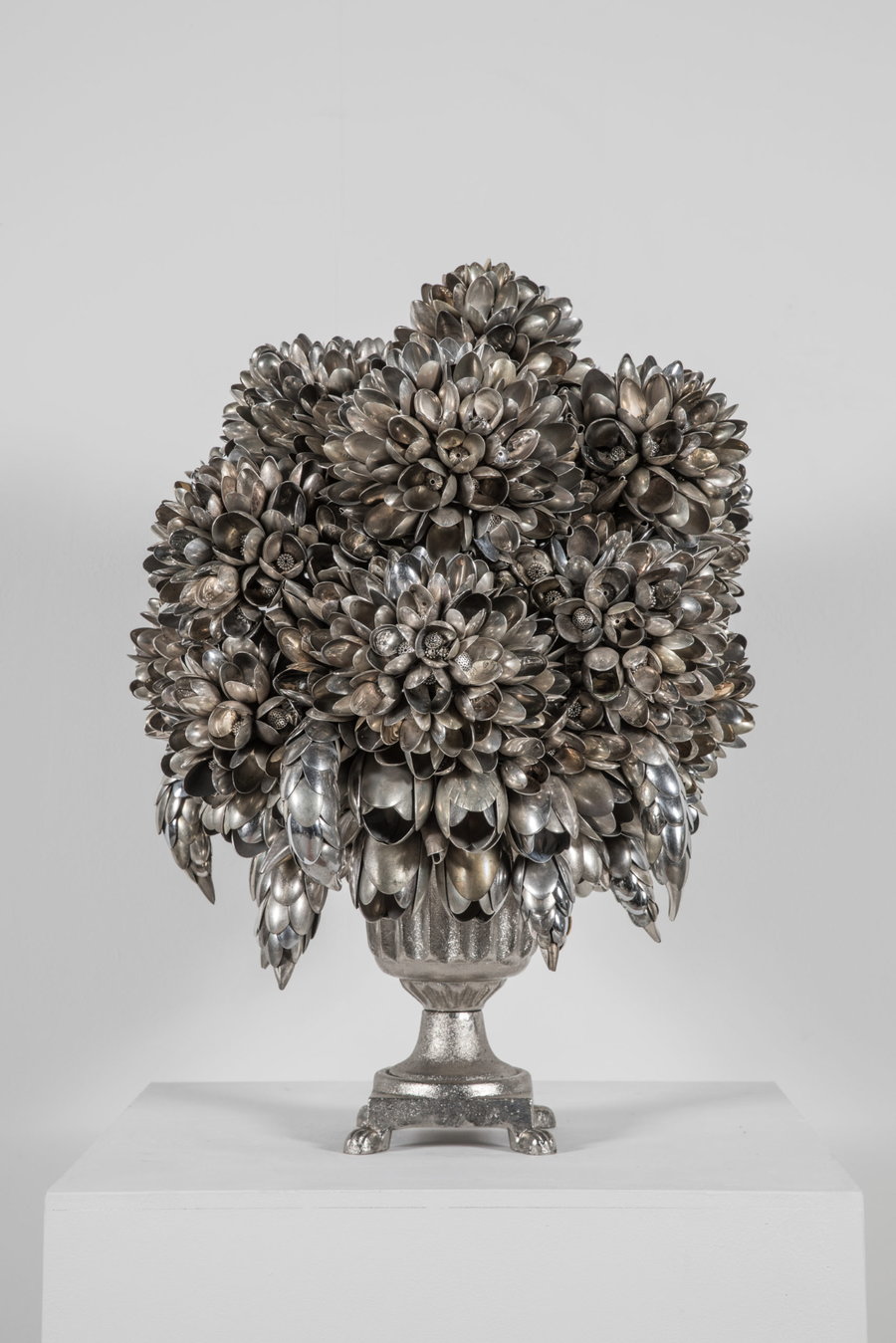 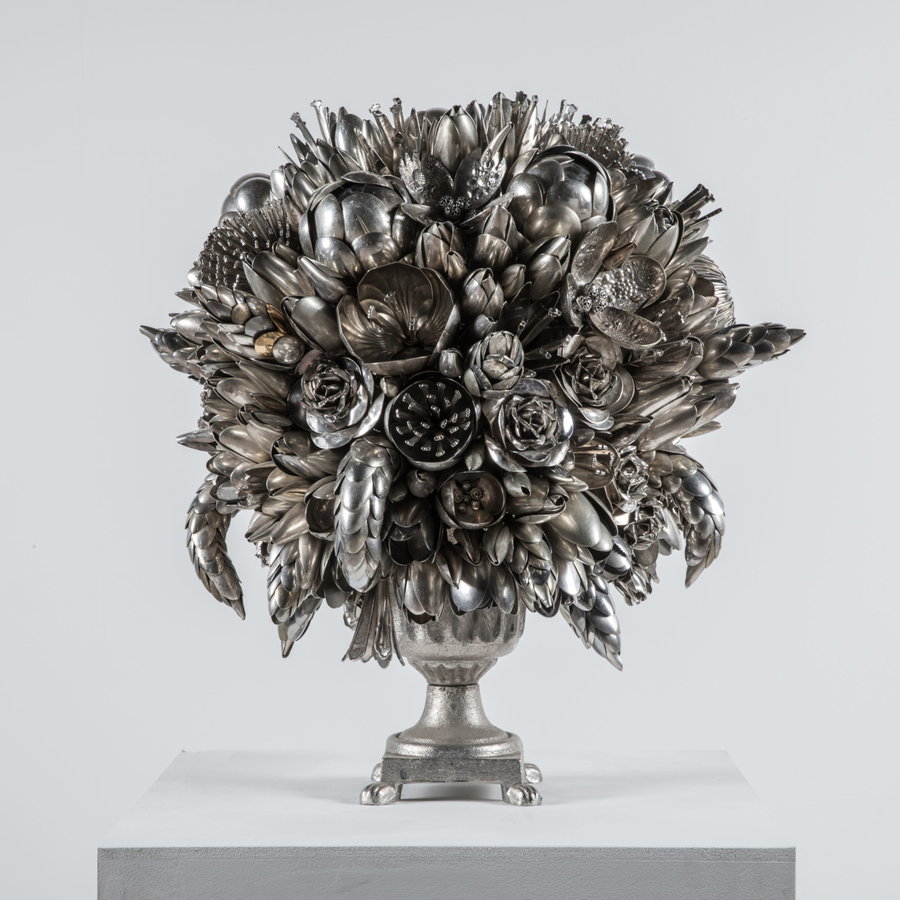 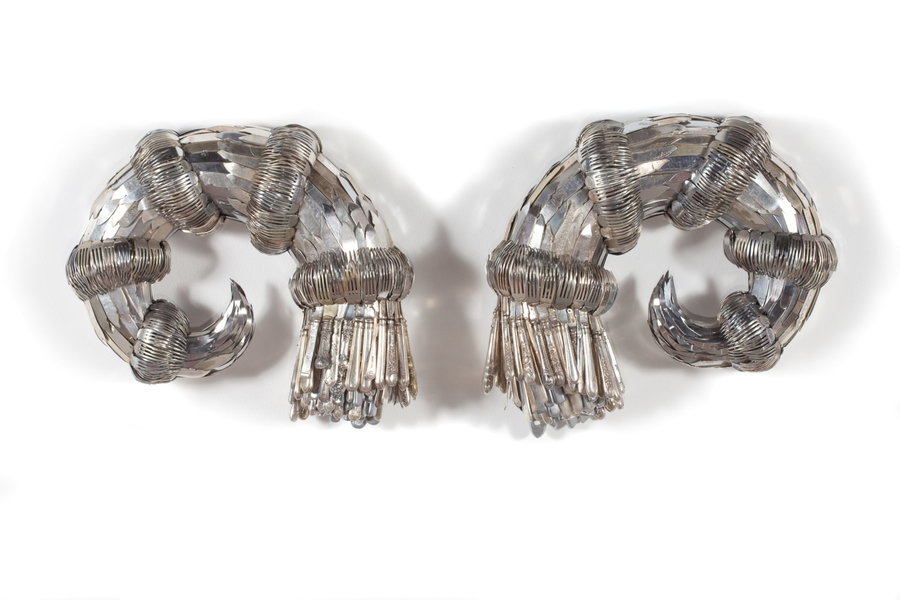 Carrington taught herself how to weld just for this project, as well as how to solder and braze. Each piece takes her roughly three months to complete. “They’re quite difficult to make,” she said, referring to the process of collecting, sorting, composing, and finally welding every item into place. “Each flower requires a different kind of spoon and each metal requires a different heating technique.” 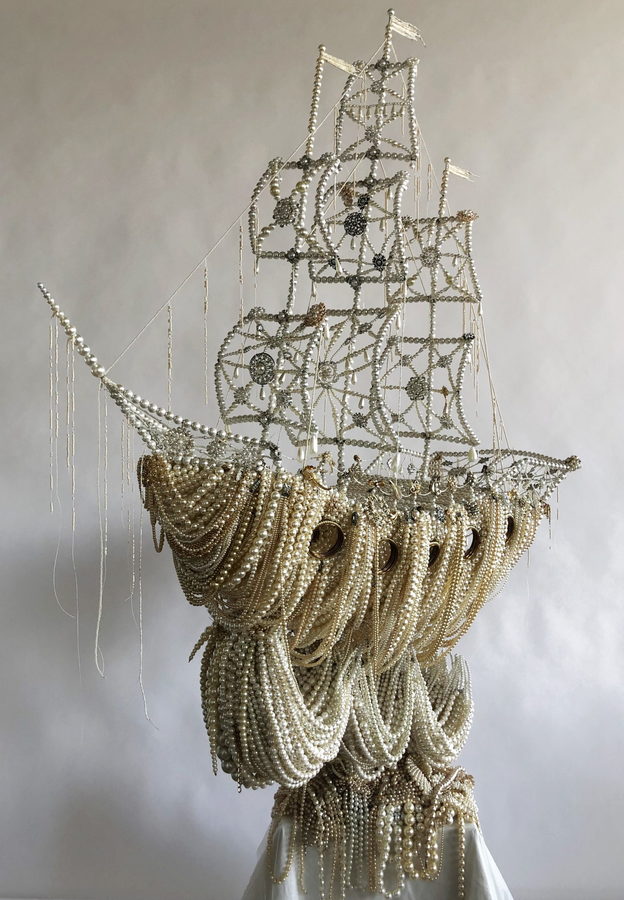 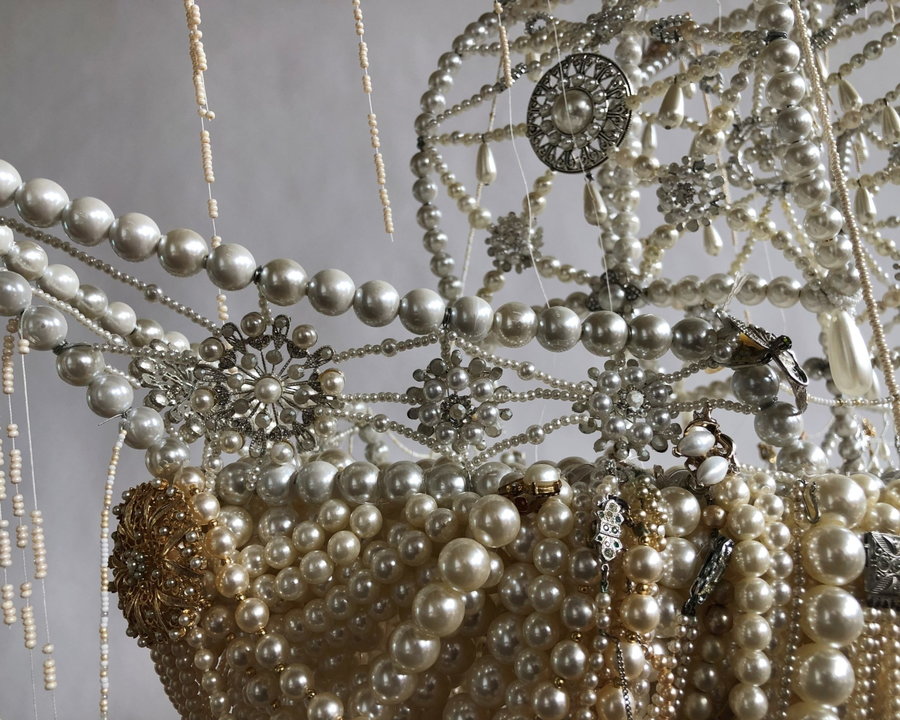 In the same vein, she has also constructed a 17th-century-style ship from the strands of discarded pearls. In a nod to Vanitas sensibilities, its splendor is tempered with the heaviness of the precious orbs.

Carrington has a long history of assembling everyday objects in completely new configurations. She’s turned gold jewelry into spider webs, metamorphosed soda cans into classical busts of famous kings and philosophers, transformed old blue jeans into a map of the United States, and even transfigured buttons into a giant postage stamp with the profile of Queen Elizabeth II. 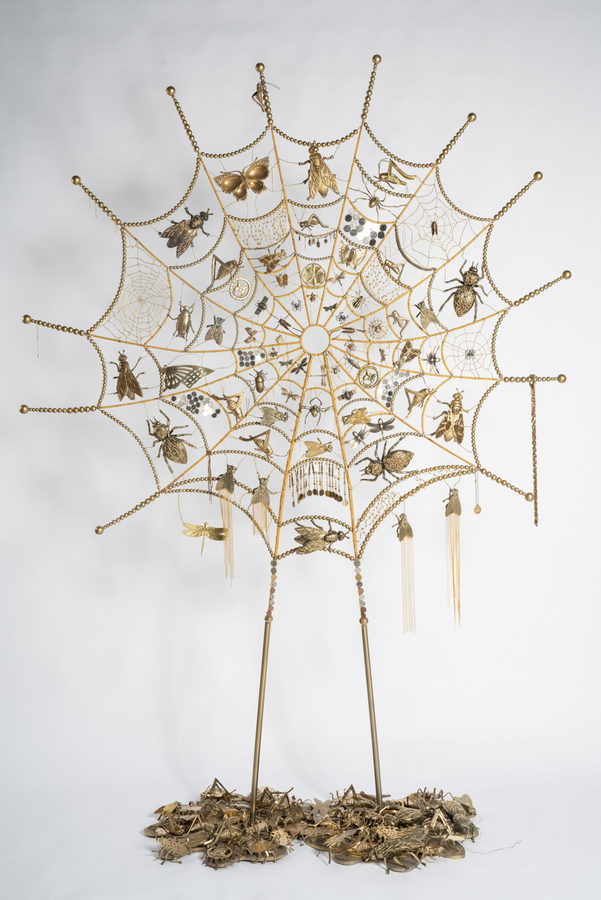 “Mundane objects such as knives and forks, barbed wire, pins, and paintbrushes come with their own readymade histories and associations which can be unraveled and analyzed if rearranged, distorted, or realigned to give them new meaning as sculpture,” Carrington adds.

Her artistic career began with studies at the Bourneville College of Art, after which she earned a Bachelor of Fine Art in 1985 from Trent Polytechnic. She finished her formal training at The Royal College of Art graduating with a Masters in Sculpture in 1987. Since then, her art has attracted global attention, even being used to help raise awareness about human trafficking at the 2010 United Nations conference in Luxor, Egypt. Her list of personal commissions from celebrity clientele is impressive, including Queen Elizabeth II and Prince Charles, Elton John, Gwyneth Paltrow, and Tyra Banks. 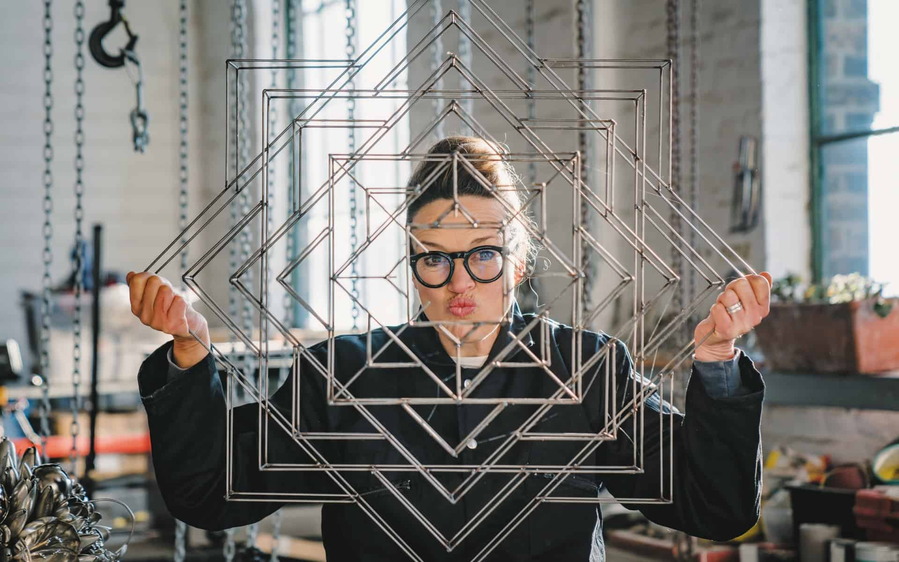