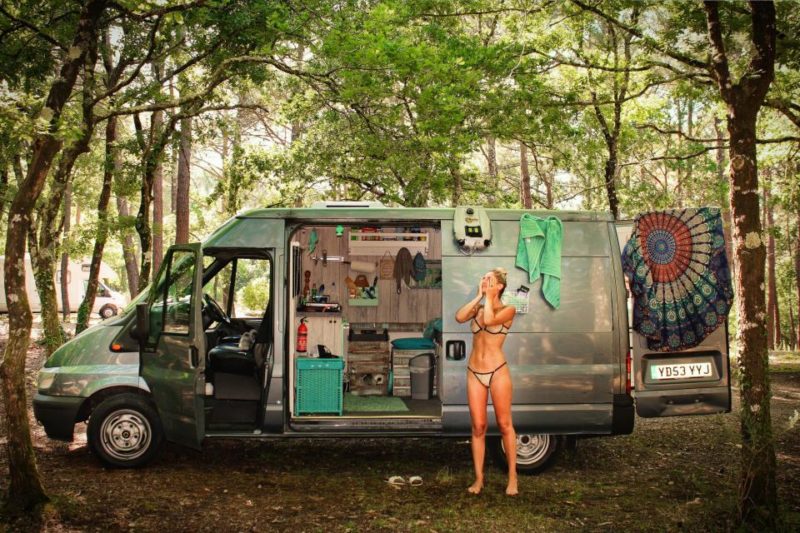 It wasn’t too long ago that Southampton born Aaron Goodfellow, 27, and Australian girlfriend Sophie Taylor, 24, decided to buy a van, convert it into a reliable motor home, and travel across Europe in it for as long as their budgets allowed for. The innovative couple has already racked up thousands of miles in their transformed 2004 Ford Transit “Stella,” and both of them have been embracing the rich European cultures they’ve stumbled upon since they left England nearly three months ago.

Since it needed a lot of refurbishment, the pair managed to nab the old transit van for a mere £900. With the help of a few DIY hacks and some clever interior planning, they managed to complete the interior conversion for £1000, with an additional £450 needed to make it roadworthy. After a couple of weeks of gluing, hammering, painting, and fitting, the van was ready to move into and move around in. 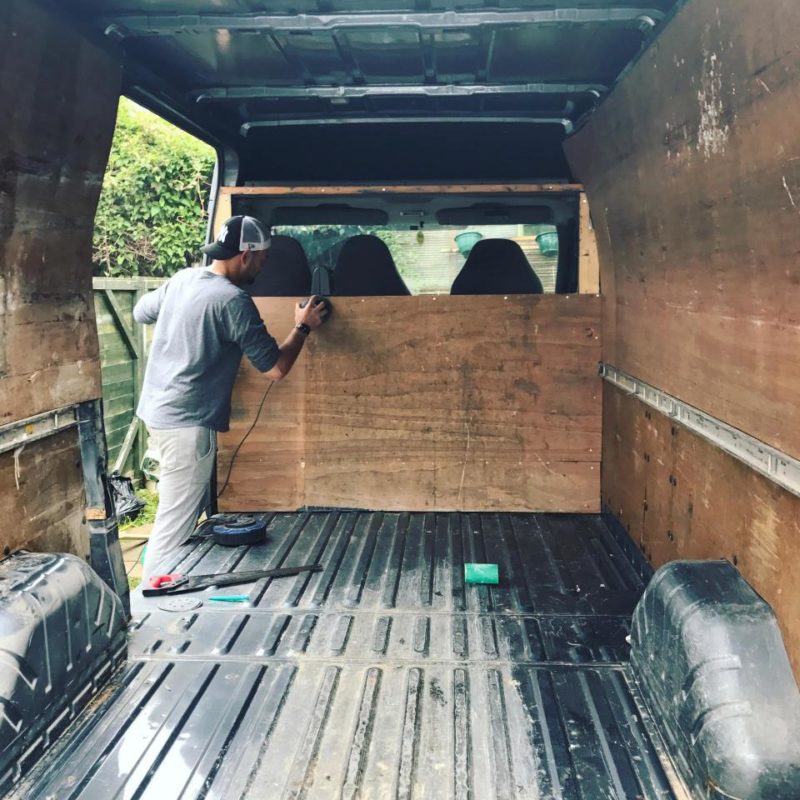 Featuring fairy lights, a highly commended toastie machine, and a makeshift outdoor shower, this knackered old van seems to have undergone the fairy godmother’s “bibbety-bobbety-boo” treatment and is now the envy of all on social media. Other features include fitted carpet, spotlights, wood paneling, a double bed, a cozy kitchen area, and a few shelving units for storage. The couple even installed additional ceiling and back door windows to let natural light in and facilitate stargazing!

Life on the Road

Stella is about one-20th of the size of an ordinary house, yet the couple still lives and operates on a seemingly normal daily routine — with the one exception of having to be very conservative when it comes to using water for washing up and showering. Although they strived to save up enough to not have to work for a little while while they traveled, the couple are still cautious when it comes to spending money and trying to live frugally. 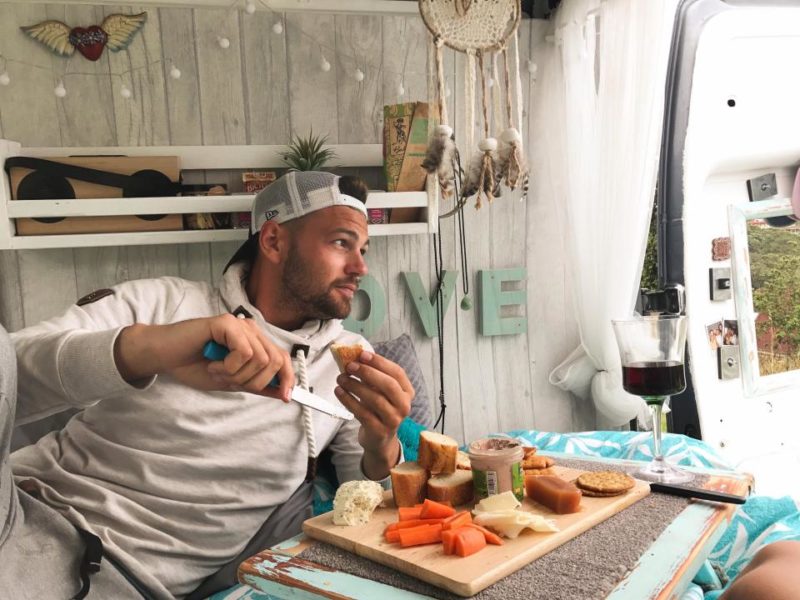 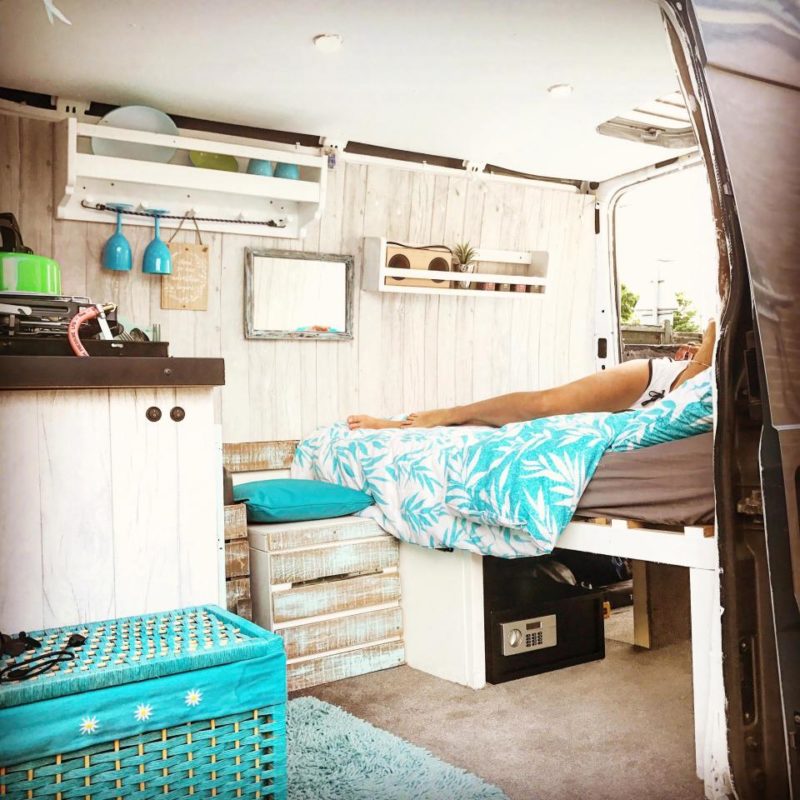 Sophie and Aaron have a minimum of two cooked meals a day, after which they spend their free time relaxing, hiking, going for long strolls, and exercising. Their minimal lifestyle has brought about a new sense of living: one characterized by planned meals, the cautious use of resources, talking, and spending quality time together over movies and Netflix series.

Sophie and Aaron plan to drive along the coast around continental Europe, beginning in France and moving down into Spain, Portugal, and then over to Morocco, where they eventually hope to reach the Sahara desert. After that, they have plans to hit Italy (they’re especially determined to do some wine tasting in Tuscany), Croatia, Slovenia, and Austria, after which they’ll head up to Germany and visit Belguim, the Netherlands, Denmark, and Sweden.

Aaron says of the journey: “Every day is completely different despite living out of the same van, the views in the morning and evenings are stunning…the freedom to drive almost anywhere at any time and choose to stay another day or move on. It’s very versatile.” 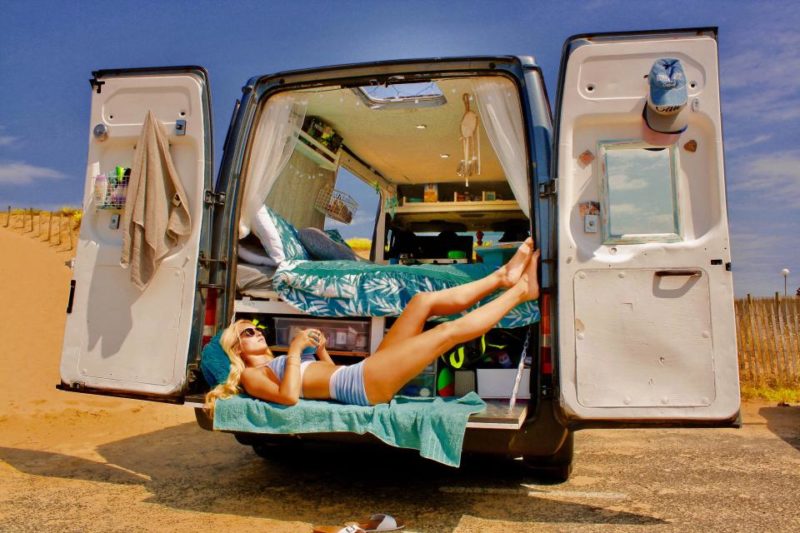 The spontaneous decision to do this was reached over a bottle of red in a Clapham pub, with the couple leaving only a month after they set their minds on achieving the conversion goal. If nothing else, this story proves that when you’re passionate and dedicated to a movement or an idea, anything is possible.