More than two years after her untimely passing, the late Dame Zaha Hadid’s self-designed Miami residence has sold for $5.75 million. Arguably one of the greatest architects of our time (and the first woman to be awarded the prestigious Prtizker Architecture Prize), Hadid is known for creating bold, dynamic structures full of organic curves and diagonal lines that suggest a sense of movement. These identifying characteristics are all visible in the three-bedroom, four-bath residence overlooking South Beach, located at 2201 Collins Avenue. 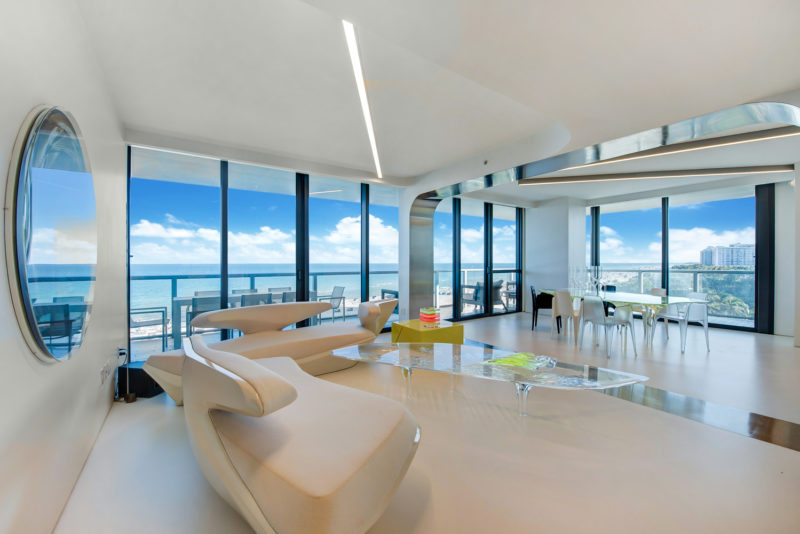 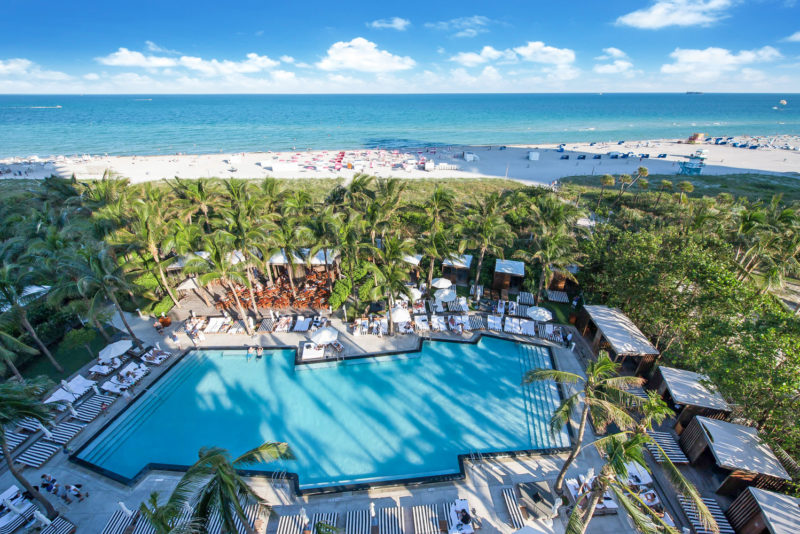 Originally listed by Sotheby’s at $10 million, this sleek residence set within the W South Beach luxury hotel boasts floor-to-ceiling windows throughout its living spaces and bedrooms to provide some truly breathtaking views of the Atlantic Ocean. In addition to Hadid’s 2,541-square-foot personal quarters, the residence also contains an adjacent studio apartment with its own entrance. The final sale price reflects nearly a 50-percent reduction from the original asking price.

Sotheby’s hails the sculptural residence as Hadid’s “masterpiece,” touting not only its stunning ultramodern style but the fact that the home is filled with objects Hadid designed herself, including a white Zephyr sofa and glass Liquid Glacial tables. A ribbon of steel stretches across the condo’s living space to reflect the ocean and sky outside.

Hadid lived in the apartment while designing a high-rise condominium nearby, the One Thousand Museum tower, which is still under construction. The 62-story residential skyscraper was one of the architect’s last buildings. 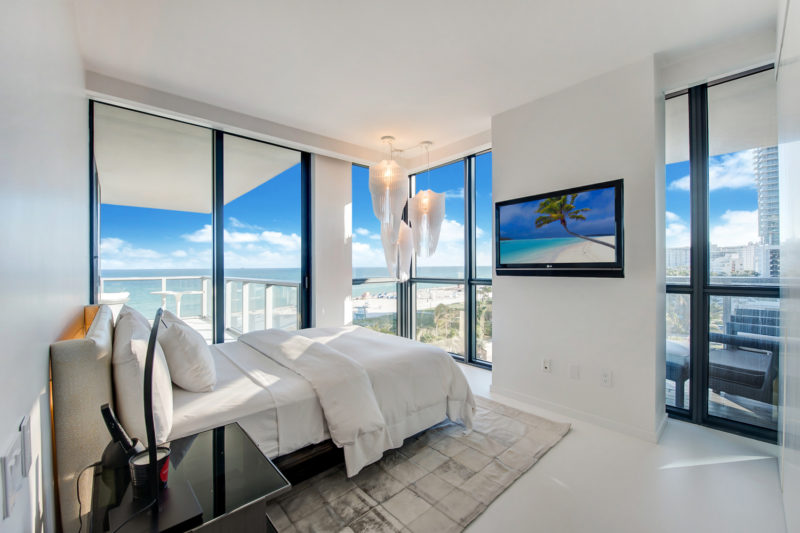 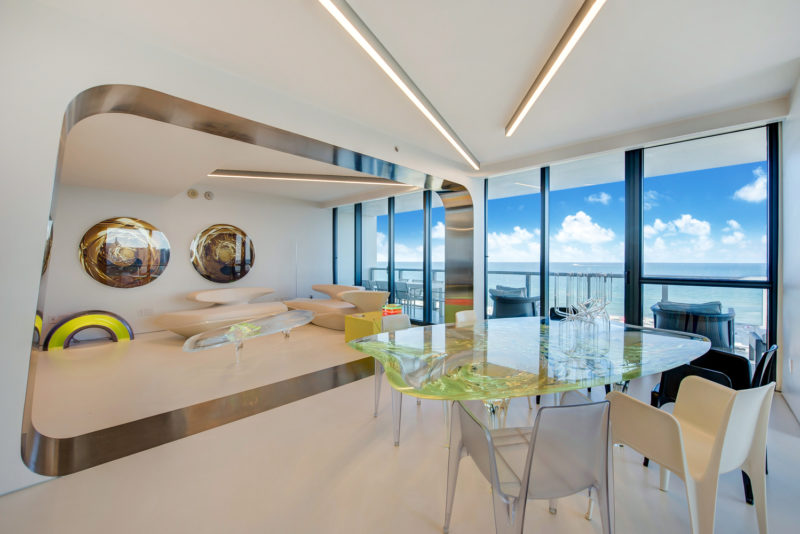 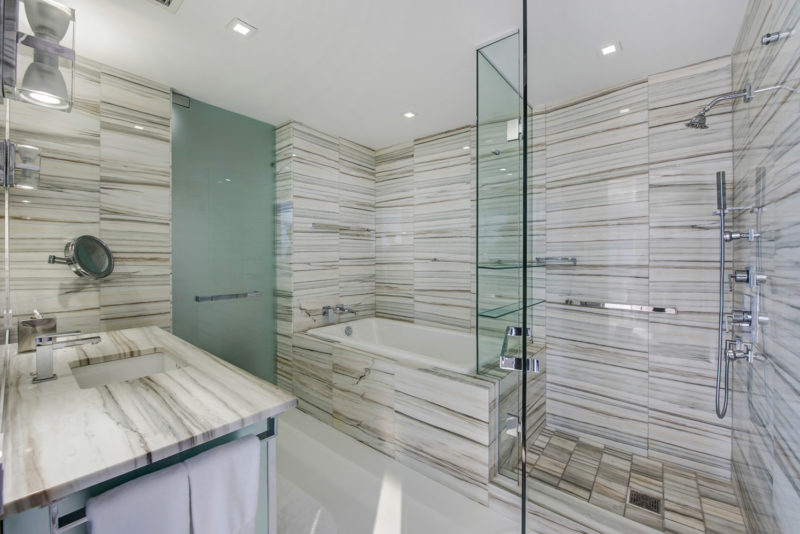 Born in Baghdad in 1950, Zaha Hadid moved to the United Kingdom in 1972, where she studied at the Architectural Association School of Architecture. Even her earliest works bear her signature curves, but her design process was revolutionized with the arrival of digital modeling programs, which enabled her to endow her works with unprecedented complexity. Her style quickly evolved to include dramatic undulating elements that flowed and slid seamlessly through each of her projects, all rendered in glossy, minimalist materials and color schemes for a futuristic effect.

Asked to describe her own style in a 2007 interview, Hadid replied: “Virtuoso of elegance. Personal investigation, research, it’s so laden with so many ideas that one cannot extrude a single one, there is no formal repertoire. Two years ago I focused on one apartment to see how many variations you can come up with in a given space with the same parameters. I would work on this repeatedly for days and see that there [were] maybe seven hundred options for one space. This exercise gives you an idea of the degree at which you can interpret the organization of space. It is not infinite, but it’s very large.” 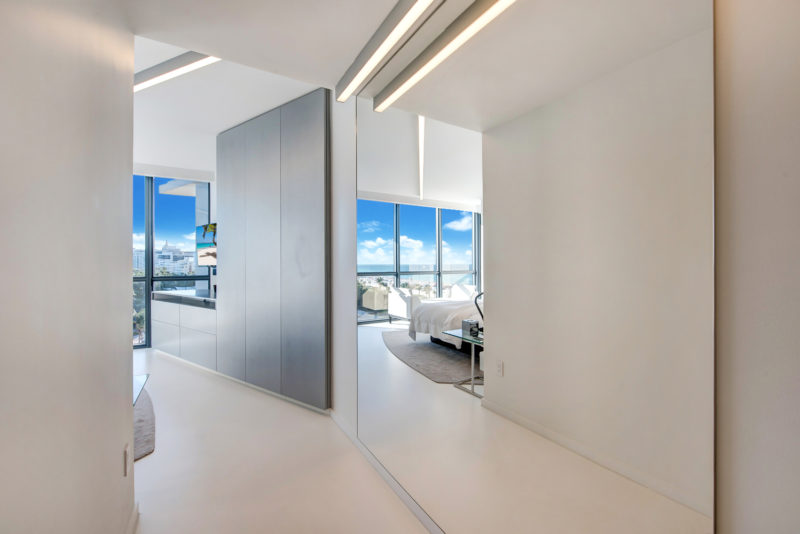 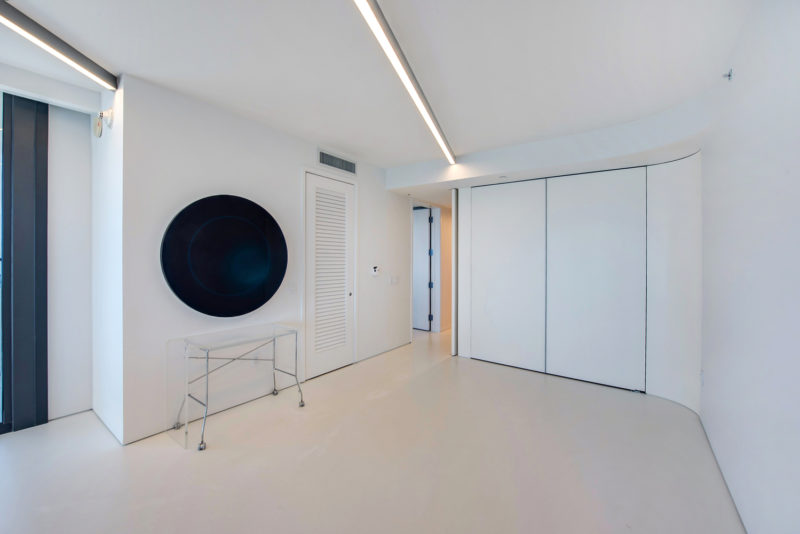 “Imagine if you multiply that to the scale of a bigger space, and that scale to the scale of a city. It is like a pianist constantly practicing — it’s the same level of intensity. It increases the repertoires immensely — it is unpredictable. Some people really live and work within the same doctrine, the same diagram with the same logic. We produce many diagrams to start with and that’s why we have a large repertoire.”