In San Francisco, what began as a lighthearted motif of spray-painted honey bears has become a divisive symbol of gentrification. About a decade ago, street artist fnnch started painting the bear-shaped bottles of honey onto every imaginable urban surface “because they make me happy,” as he told the San Francisco Chronicle. But as this image became more and more commercialized, showing up in everything from Bay Area sports team merchandise to Williams-Sonoma cookware collections, it stirred up a backlash that has culminated in a bloody Valencia Street window display. 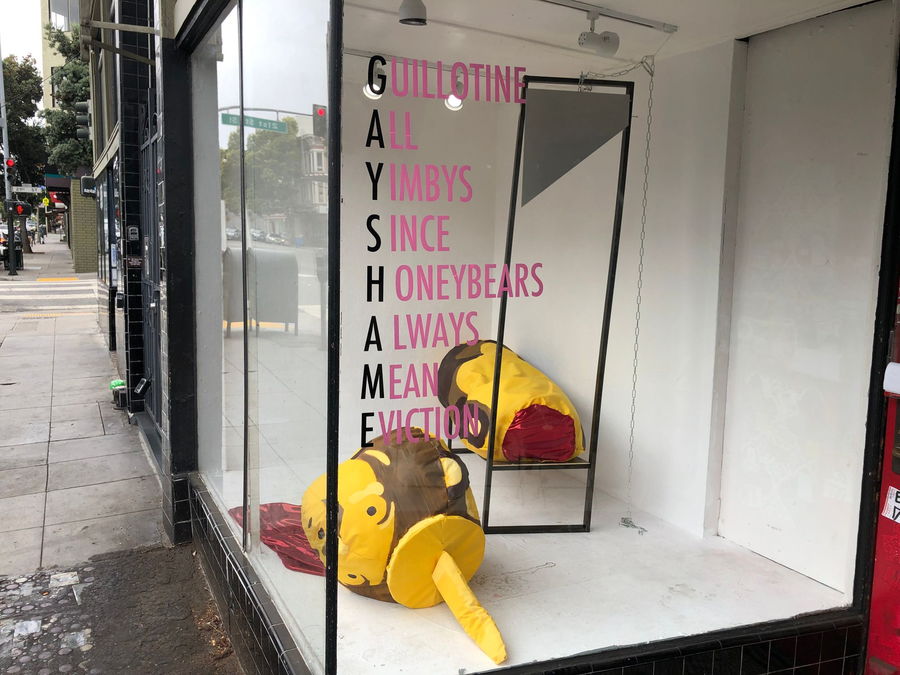 Set beside the entrance to the nonprofit theater and gallery Artist’s Television Access (ATA), a beheaded human-sized stuffed honey bear lies beside a guillotine, a pool of blood-red satin streaming from its neck. Anti-gentrification activist group Gay Shame wrote a message on the glass outside, the first letter of each word spelling out its name: “GUILLOTINE ALL YIMBYS SINCE HONEYBEARS ALWAYS MEAN EVICTION.”

The group explains that “fnnch’s ‘cute art’ is not the innocent beautification of the urban landscape; its autonomy as art-for-art’s sake is illusory and deceptive,” the group writes in an artist’s statement tucked into the flyer box beside the door. “It’s all a public relations smokescreen disguising dispossession, displacement, and destruction that benefits investors, developers, and other capitalists (AKA YIMBYs, the State’s BFFs.) Artwashing is a direct product to the complicity of people like finch and his fans [/stans] in the weaponization of art by real estate interests. They do this to increase property values, which forces out low-income renters of color; many of them trans or queer.”

San Francisco has changed a lot in the last two decades, largely as a result of the tech industry that has sprung up around the Bay Area. The influx of wealthy transplants drove up the cost of living, instigated a housing crisis, dramatically worsened homelessness, and resulted in the displacement of many long-term residents, especially low-income minorities. Now the most expensive city in the U.S., San Francisco is rapidly losing the culture that made it an interesting place to live and visit in the first place, and the effects are bleeding into adjacent cities like Oakland.

To activist groups like Gay Shame and other locals, mainstream (read: white and wealthy) LGBT people are part of the problem. The honey bear motif was already spreading through the city before the pandemic, but became even more prominent in 2020 and 2021, with mask-wearing bears appearing on buses and transit shelters; in March, fnnch sold a non-fungible token of a honey bear portrait of Facebook founder Mark Zuckerberg for $64,000. Then the San Francisco LGBT Center commissioned fnnch (a straight artist) to paint a large mural of three bears on its exterior wall, and the backlash exploded. In a recorded confrontation with another local activist, fnnch said “I’m from Missouri. I immigrated here. I’m an immigrant to San Francisco.” Needless to say, these comments didn’t help; his mural was defaced and then painted over with works by queer artists.

Thank you Mayor @LondonBreed for stopping by the @SFLGBTCenter and getting your photo taken in front of my mural! Your support of vital community organizations like the #SFLGBTCenter is extra important during these strange and difficult times.

Gay Shame first formed as a protest against the corporatization of Pride (hence the name), and is known for calling out instances in which the mainstream Bay Area LGBTQ+ community is complicit in gentrification and displacement. Their window display will remain in place through September 1st at 992 Valencia Street, and you can read more about their perspective at GayShame.net.