An old industrial grain storage complex built in the 1970s may not sound like the coolest (or safest) place to build a playground, but Beijing-based architecture practice waa (we architech anonymous) has modified the site in an unexpected way. Laid on top of and in between the existing structures, a sculptural new play surface rises and falls like waves, creating a fun complex of covered and uncovered spaces to explore. 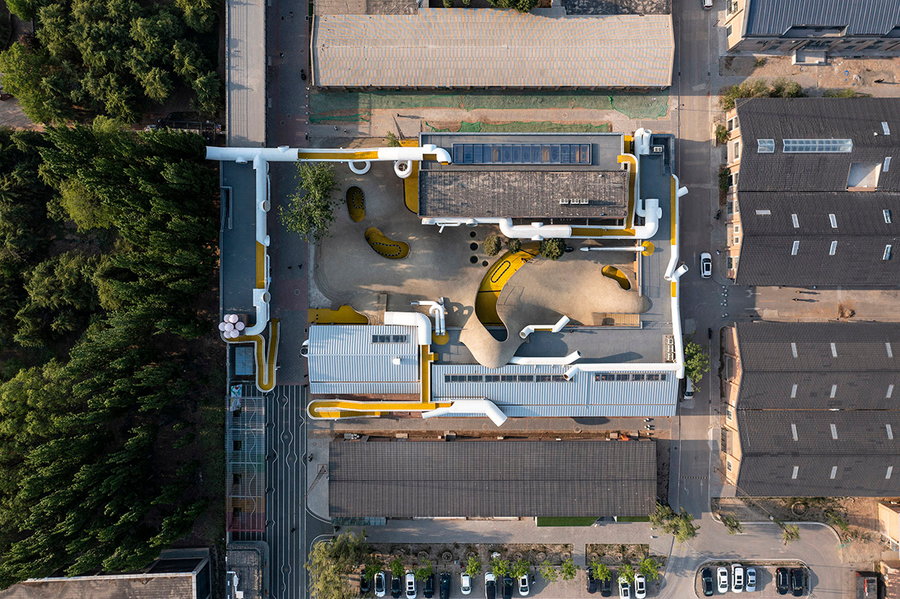 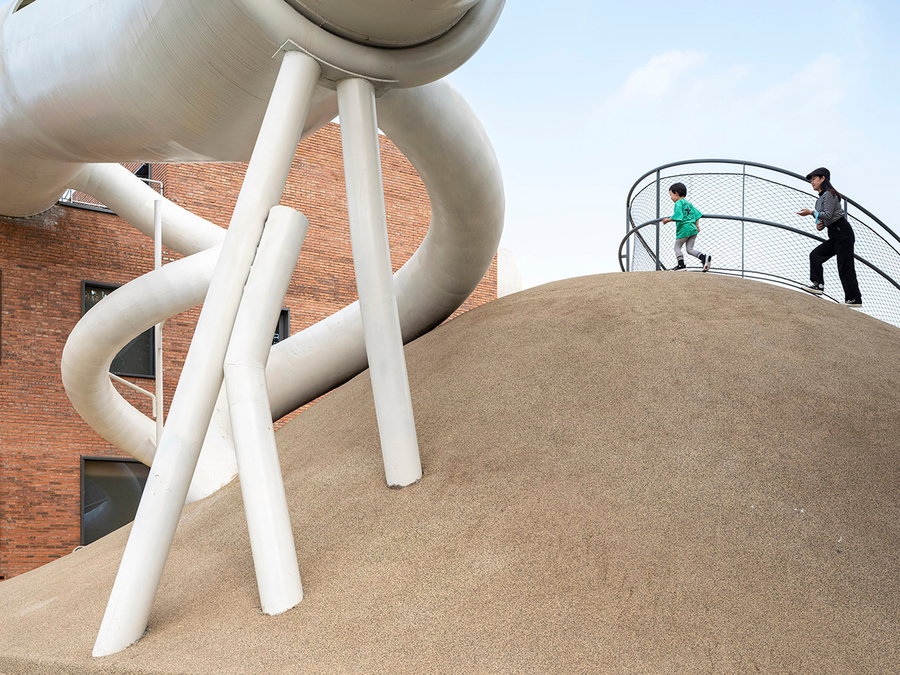 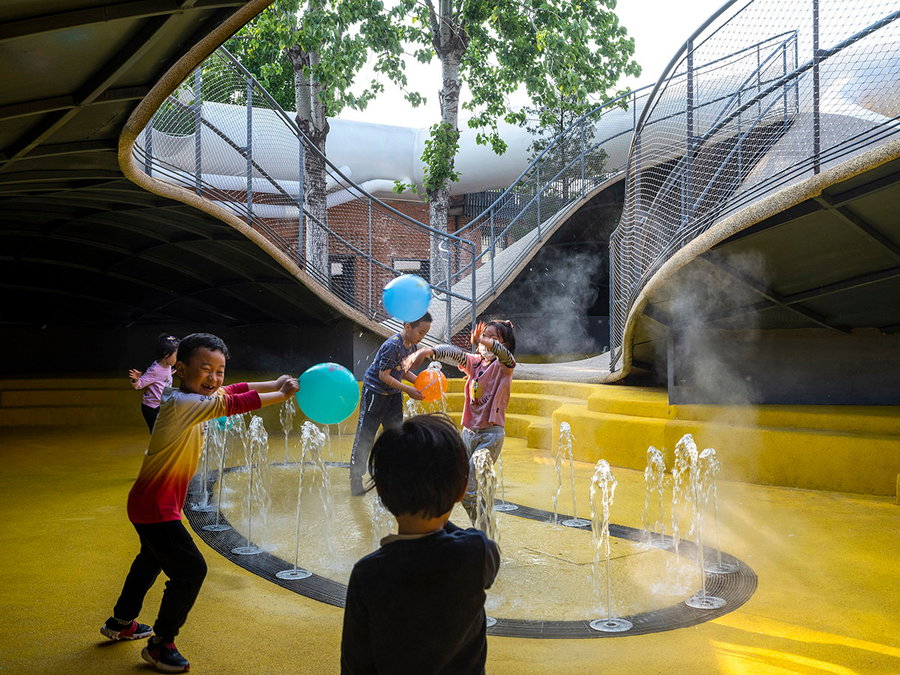 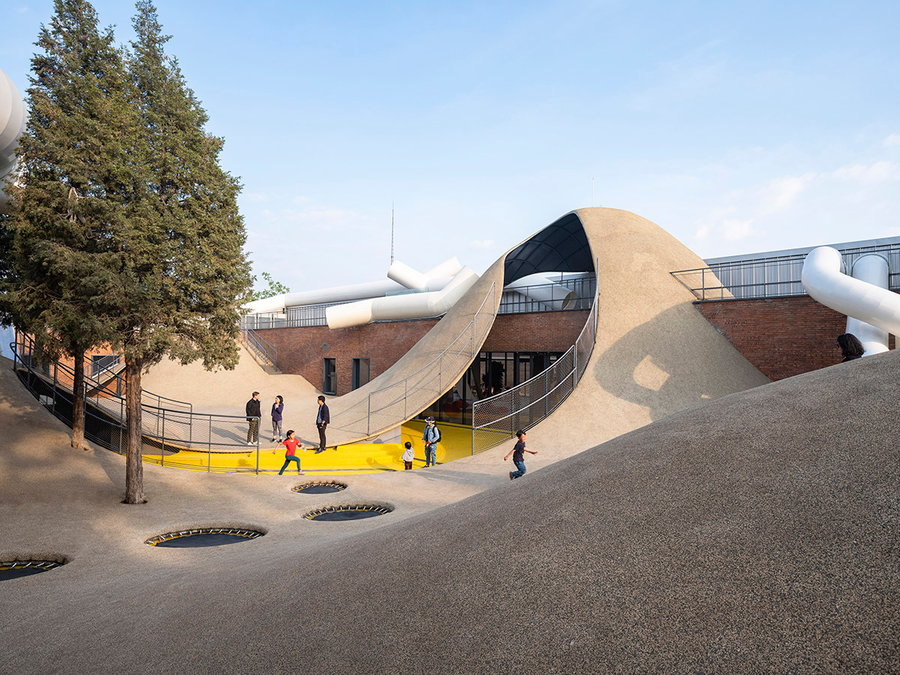 Located in the north of Beijing, The Playscape – Children’s Community Center is a 29,000-square-foot facility that aims to inspire kids to move their bodies and interact with each other like previous generations did when more Chinese people lived in intimate neighborhoods rather than huge impersonal cities. Developed by a health care provider specializing in children’s development, the center is designed with five traits in mind: Hide and Seek (group interaction), Adventure Playground (risk), Nook and Cranny (body proportion), Maze (discovery), and Fantasy (imagination). 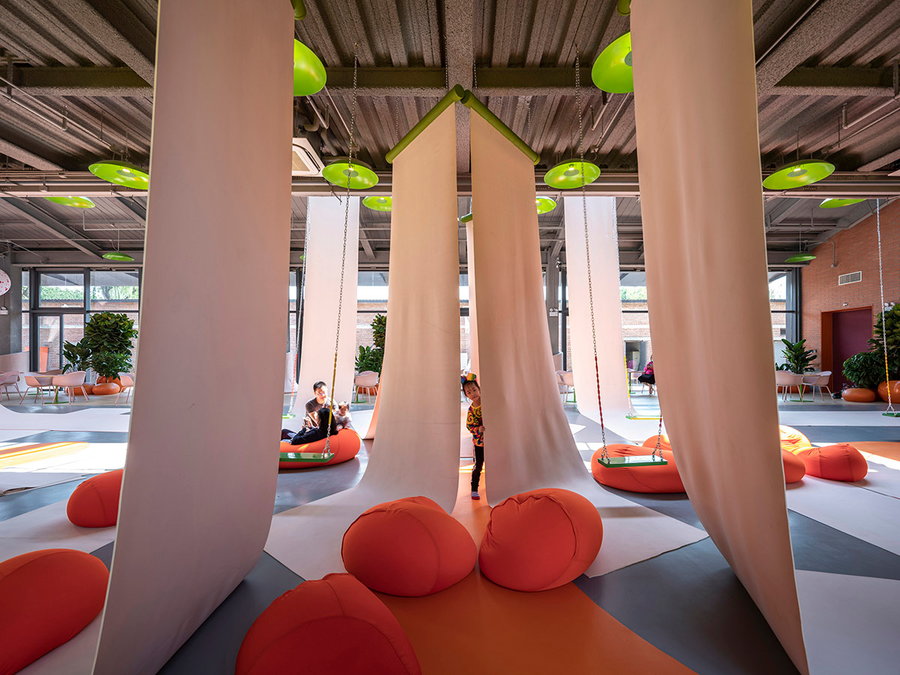 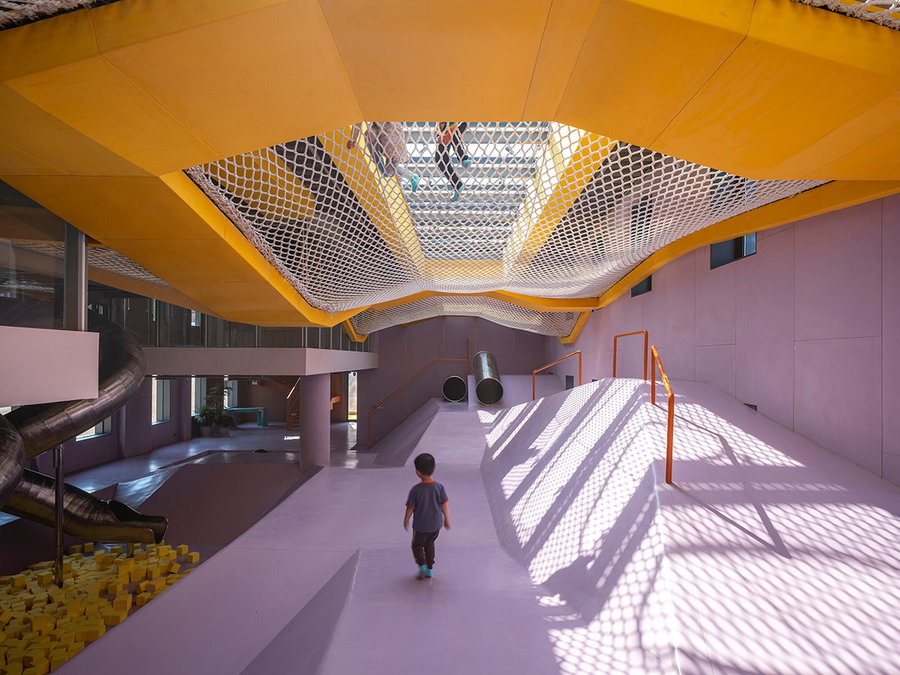 These spaces encourage kids to play pretend with each other, decide what level of risk they feel comfortable experiencing, understand how their bodies fit within various spaces, be brave and adventurous, and make their own decisions within an abstract landscape with few signs or instructions. The undulating play surface interacts with a system of climbable tubes, stairs, hidden indoor spaces, trampolines, slides, and more. Built around existing trees as well as the old buildings, it completely changes how visitors experience the complex, creating new connections between upper level indoor spaces and the outdoors.

The project uses three main architectural devices – “pipe,” “roof,” and “mound” – to engage kids in creative play. The pipes are seen as armatures arranged as a series of connecting bridges and staircases, as well as slides, safety balustrades, and lighting. The walkable roofs reward kids who exert themselves in climbing to the top with new vantage points, while the mounds hide additional covered play spaces beneath the topography of the space. The architects say much of the design is based on the notion that many play spaces dictate exactly where kids should go and how they should use each element, while the Playscape inspires a lot more freedom and imagination. 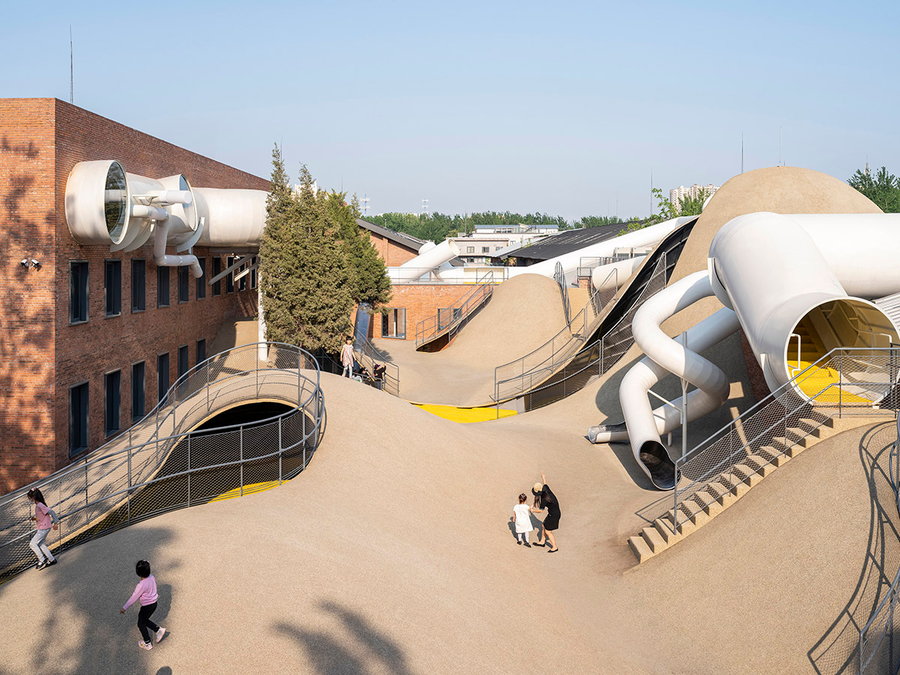 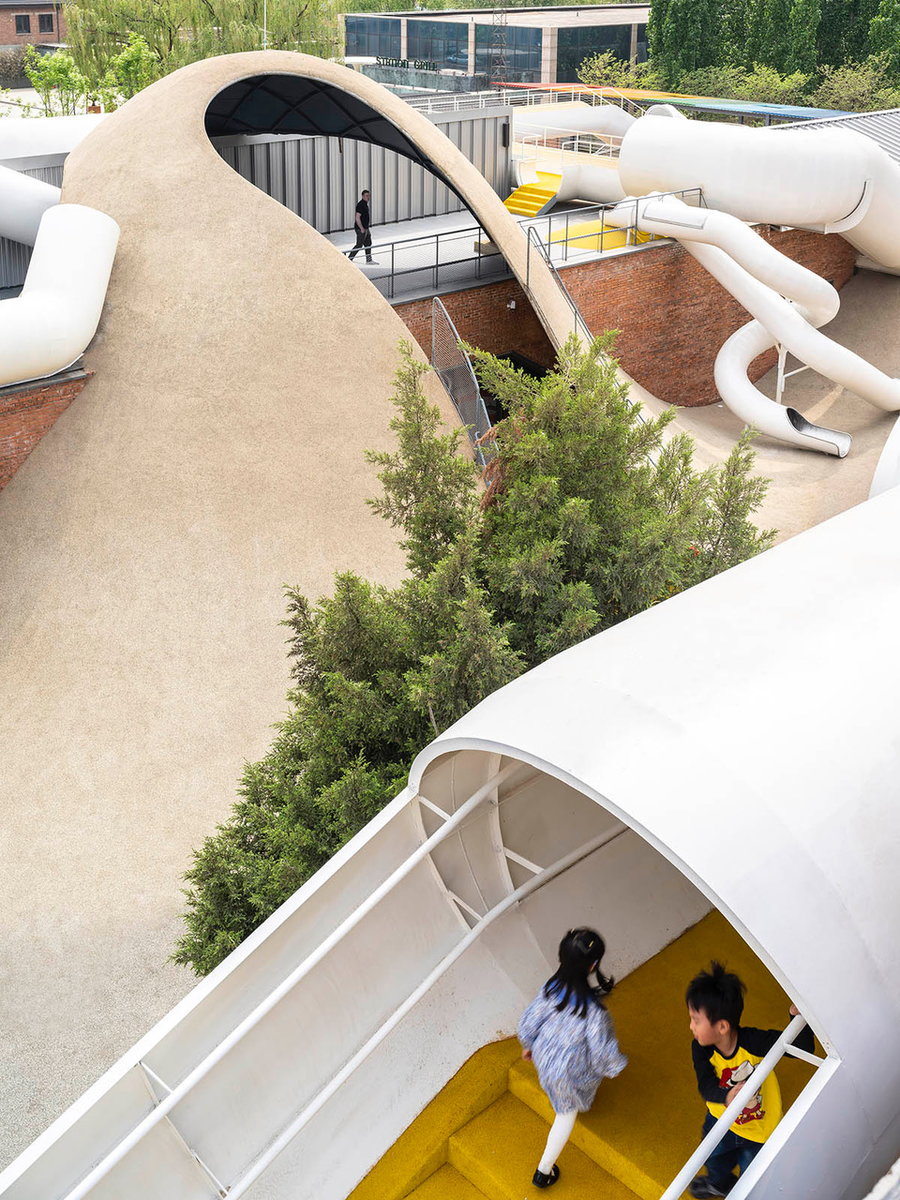 “We believe the missing element in a child’s development in a modern Chinese city is chiefly a functioning neighborhood,” explain the architects. “We hoped to create the experience of street play and prioritize the reductions of gizmos and screen time. Drawing inspiration from popular culture of the past and abstracting important identities for our new neighborhood’s character.”

“The Playscape is a tool to promote learning while allowing narrative creation for children to dream and develop senses relating to equilibrium (balance) and proprioception (awareness). Balance is taken for granted until it is challenged. It is our hope that activity-based emotional responses to this built environment and the perceptions harnessed can augment the client’s tools in helping strengthen coordination within the child’s development.” 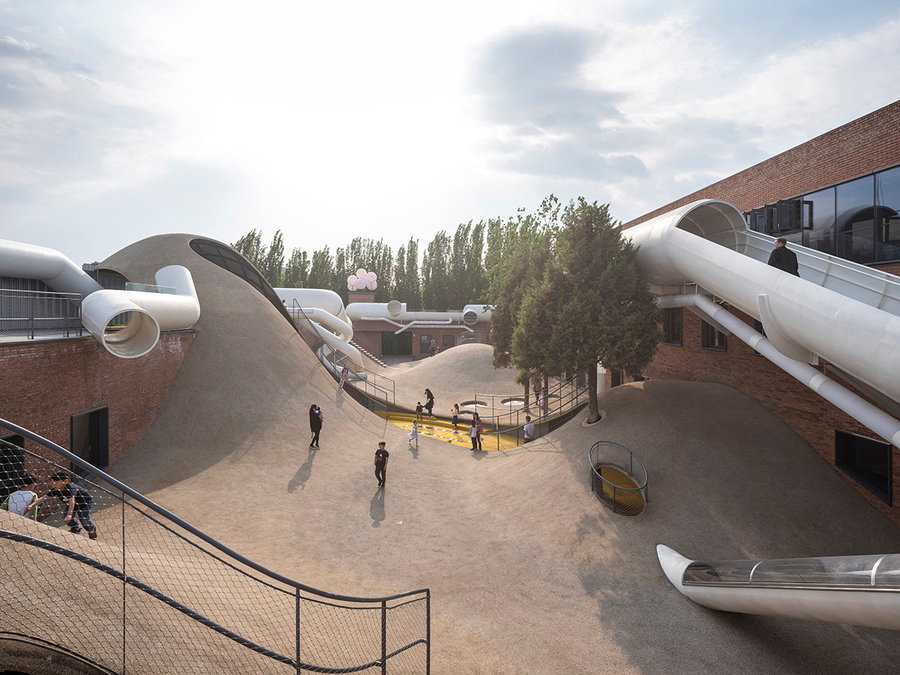 Judging from photos of the project, The Playscape looks so fun, adults might even be tempted to go explore it themselves, kids or no kids. It’s certainly an imaginative way to reactivate an industrial site that was no longer useful in its previous form.