The recent opening of the inaugural Triennial at the National Gallery of Victoria in Melbourne, Australia, closed out 2017 on a creative high note. The mammoth exhibition, which has been running since December 15th and is expected to remain on display until April 15th, 2018, showcases artworks and installations by over 100 artists from 32 countries around the globe and is an exploration of art and design through the lenses of culture, geography, perspective, and scale. 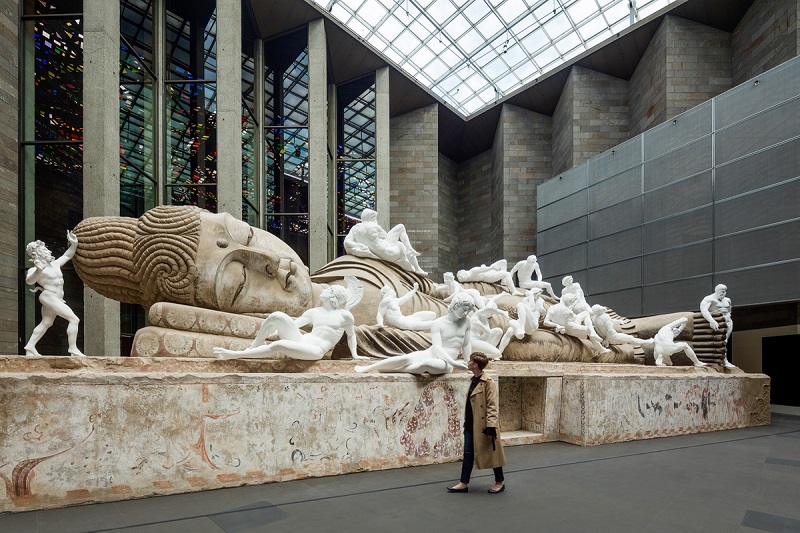 Last year, Dornob reported on the much talked-about installation by Australian artist Ron Mueck, who is most commonly known for his arresting hyperrealistic sculptures of the human form. For the Triennial, however, he took a different approach by installing 100 giant skulls in the exhibition hall, inviting the viewer to reflect on their own mortality. Continuing the success of Mueck’s installation, another artist’s featured work has recently been receiving a lot of buzz.

Xu Zhen’s monumental scene, which blends Eastern and Western cultures, has been given the elaborate title of “Eternity-Buddha in Nirvana, the Dying Gaul, Farnese Hercules, Night, Day, Sartyr, and Bacchante, Funerary Genius, Achilles, Persian Soldier Fighting, Dancing Faun, Crouching Aphrodite, Narcissus Lying, Othryades the Spartan Dying, the Fall of Icarus, A River, Milo of Croton.” The huge sculpture, which is sited in the gallery’s huge open concourse, consists of a giant 14-meter-long reclining Buddha, upon and around which 15 Greek and Roman statues appear in various positions of movement and repose. The Chinese artist chose to bring recognizable figures from both the ancient East and West together in this piece to create “a new form of creative culture,” blurring the boundary between these disparate societies and promoting a greater sense of understanding between them. 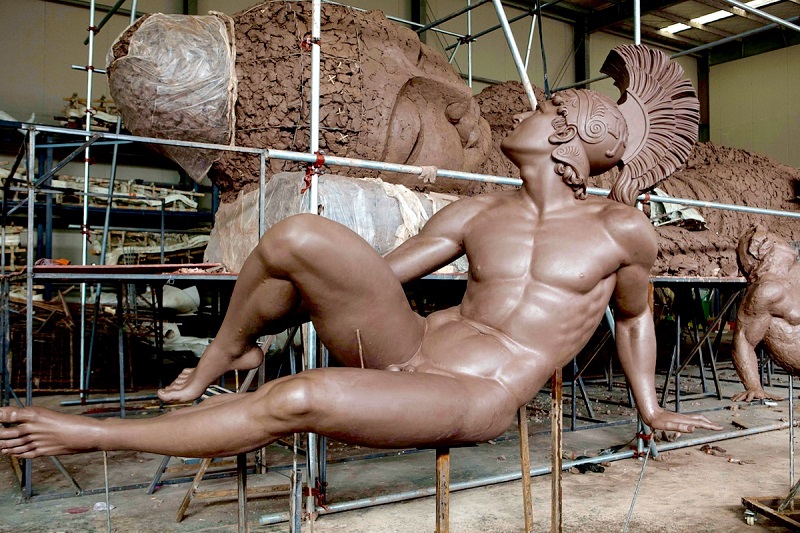 The Buddha Zhen has chosen to depict in “Eternity-Buddha in Nirvana” dates back to the High Tang Dynasty (705 – 781 C.E.), and the Greek and Roman figures around it are all of historical and/or mythological importance. The juxtaposition of the Eastern and Western figures references the ancient trade route known as the Silk Road, which boasted the original sculpture of the Buddha (carved into a grotto called the Nirvana Cave) at one end and statues of Greek and Roman gods (placed there by passing artisans and tradesman) at the other. 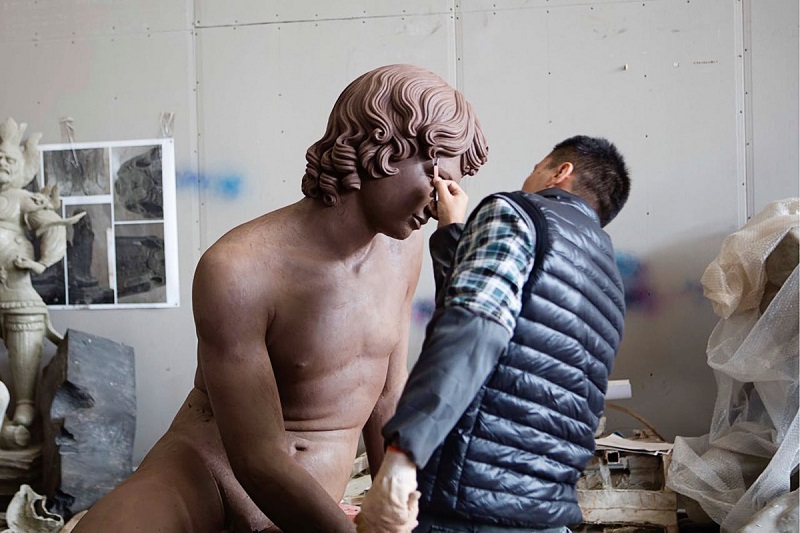 Well-known protagonists from Greek and Roman mythology such as Achilles, Pan, and Hercules all make appearances atop the giant Buddha. Zhen elaborates on his decision to bring opposing cultures together in his work by saying, “‘I have always been curious about the differences between cultures and the alienation between them. And yet, misconceptions can be the beginning of awareness and understanding.”

Continue reading below
Our Featured Videos
In the past, the Chinese artist has explored the mediums of film, photography, performance art, painting, sculpture, installation art, and curation. He was even awarded the prestigious China Contemporary Art Award in 2001. He also runs his own production company, MadeIn Company, which focuses on contemporary art production and research into contemporary culture. Xu Zhen was born in Shanghai in 1977 and is still primarily based out of his home city.
All photos courtesy of MadeIn Company.