Spanish artist Dionisio González is a master of fanciful architectural visualizations, designing structures that are just a little too wild and imaginative to be real. We previously featured González’s compelling vision of creatively collaged shantytowns, where existing structures are incorporated into tangles of dense housing that grow spontaneously, almost like living organisms. Now, González imagines retro-futuristic amphibious dwellings made primarily of metal, resting on artificial islands against a backdrop of picturesque Norwegian fjords. 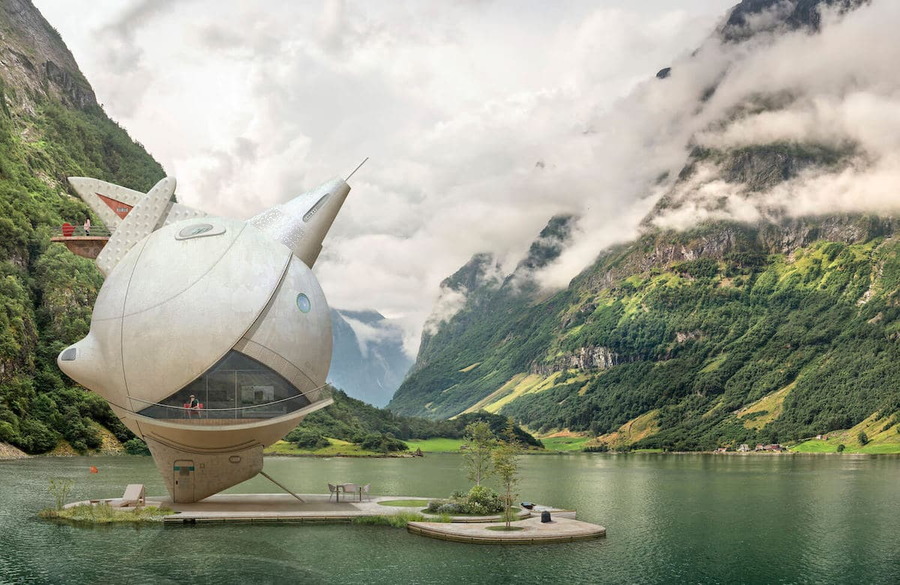 Named “Wittgenstein’s Cabin,” the series draws inspiration from the secluded 1914 hut of Austrian-British philosopher Ludwig Wittgenstein. Built on the steep shoreline of Lake Eidsvatnet in Skjolden, Norway, the cabin was purposefully located to be as remote as possible, serving as Wittgenstein’s distraction-free refuge where he wrote some of his most important works. To access it, he had to cross the lake by boat or walk over ice. González was stricken by the way in which the dwelling seemed to be in confrontation with the water and the imposing mountains that surround it.

“Wittgenstein worked on his studies of logic on a boat his friend David Pinsent sailed in the Sognefjord,” says González. “This fact this ‘event’ of the research, the learning and memorizing on a small aquatic means of transport, which serves as a writing desk, let me to consider the relationship of architecture with water, and of philosophy as an ‘amphibian’ endeavor. How would Wittgenstein frame that organic building, that architectonic construction in a liquid medium with the present media? What would contemporary cabins be like in diffracting settings of propagating waves, such as the Norwegian fjords?” 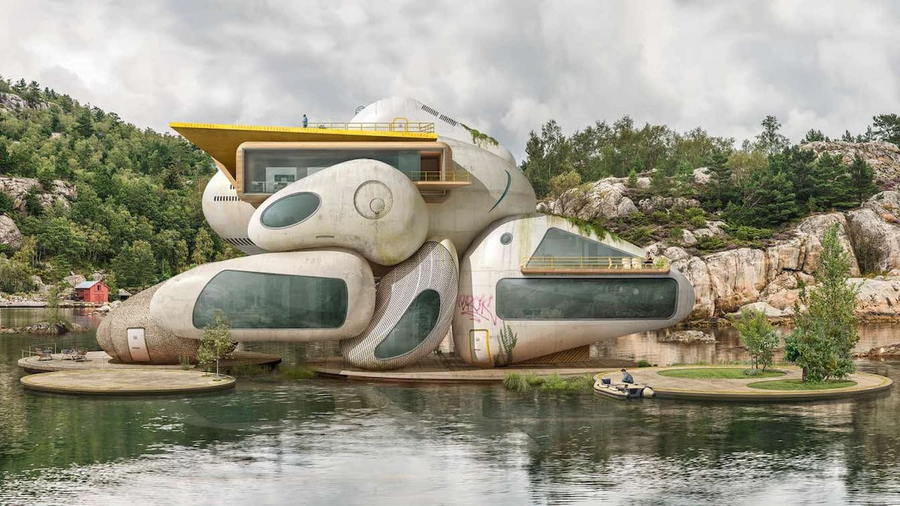 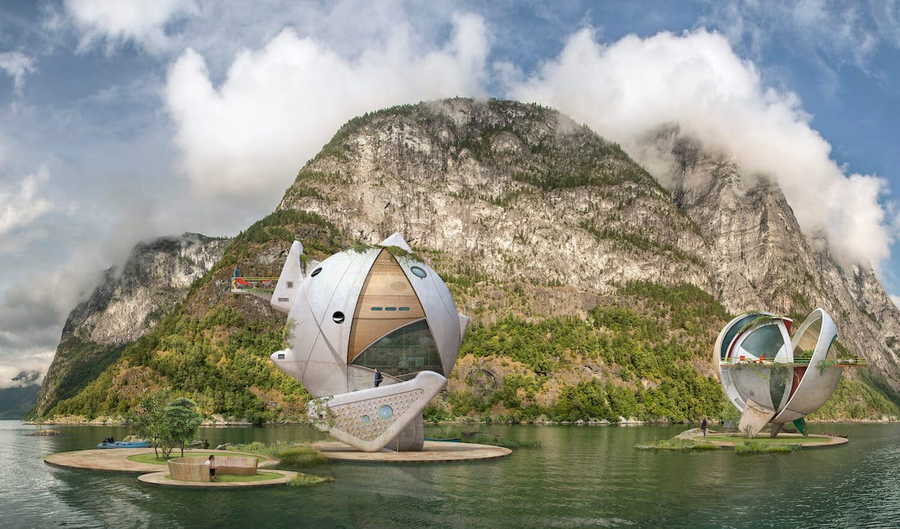 González imagines how these qualities would translate to contemporary buildings, giving them an amphibious nature that works with the water that surrounds them. Each design is its own strange refuge, difficult to access but providing occupants with the sort of hermitage most of us can only ever dream of having. If the water rose around them, parts of these buildings would become submerged, but remain functional. Some look like spaceships crash-landed into the landscape, others like avant-garde architectural experiments from the 1960s gone wild. 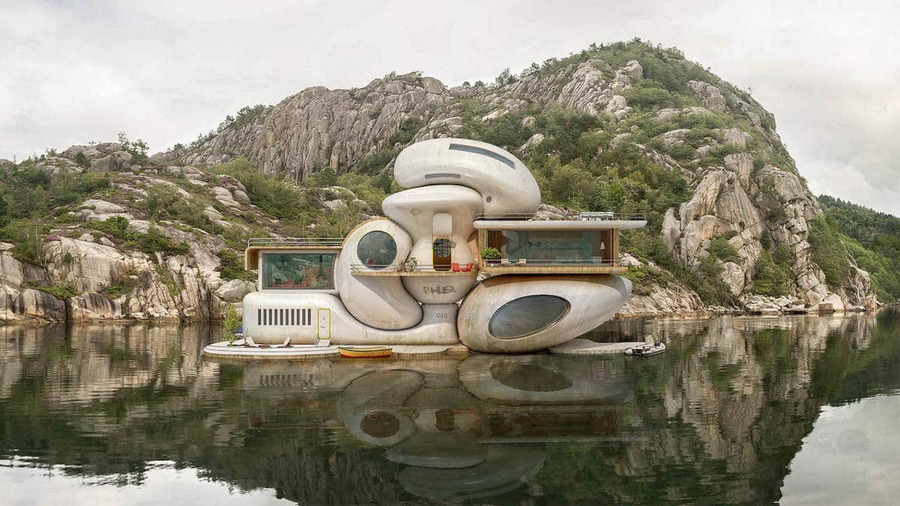 González began working on the Wittgenstein’s Cabin series in 2020, when concerns about the global pandemic led many of us to ponder the way isolation makes us feel: safer for some, and desperately lonely for others. The desire to live in a remote place is often at odds with the reality of our need for access to resources, services, and other people, as well as environmental concerns. The fact that these buildings look so alien in the pristine fjord setting creates a sense of tension, in contrast to the humility of Wittgenstein’s small wooden hut.

The Seville, Spain-based artist travels the world to take photographs of interesting buildings, which he later modifies and embellishes through illustration and digital design. He focuses on envisioning habitation for areas that tend to be overlooked, like slums, favelas, and areas prone to natural disasters. The goal is to craft stimulating, creative solutions that provide a positive social benefit. 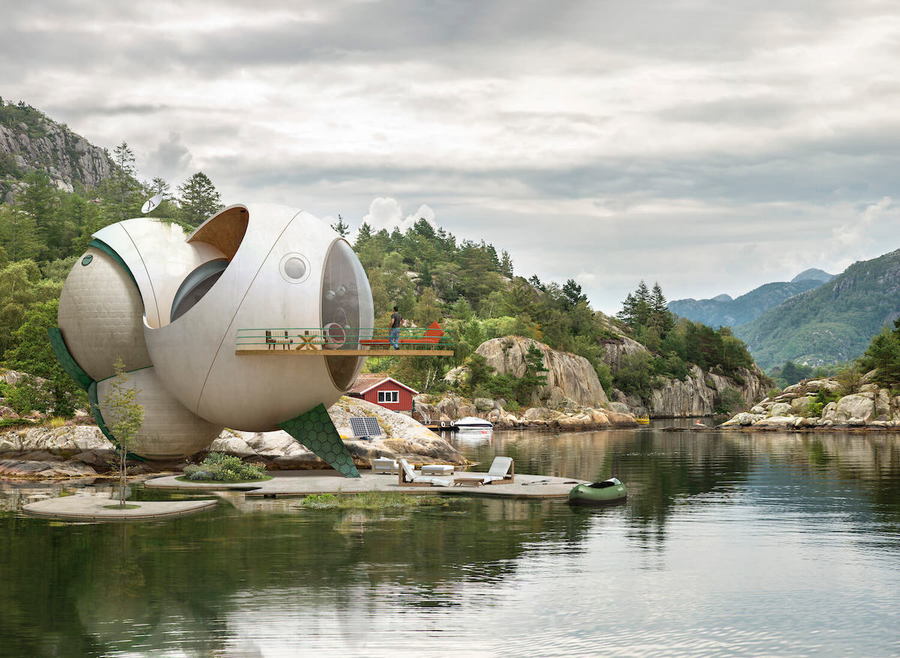 The results may not be particularly realistic as far as actual construction goes, but they grant a dignity and gravitas to these spaces. González’s designs are whimsical and sculptural, reminding us that making the world more habitable even in the face of climate change can still be fun.