It’s so easy these days to retreat to the comfort of our homes, distancing ourselves from the world outside. With the doors closed and the curtains drawn, we could be anywhere in the world. Meanwhile, our connection to the particular culture, climate, and landscape of our location diminishes. That might be okay when we’re living in less than desirable places, but when we’re lucky enough to reside in a beautiful locale, why not enjoy it, even when it’s a little blustery outside? That’s the idea behind the Studio Bunkhouse by Cutler Anderson Architects, a tiny cabin with a view nestled within the forests of the lush Pacific Northwest. 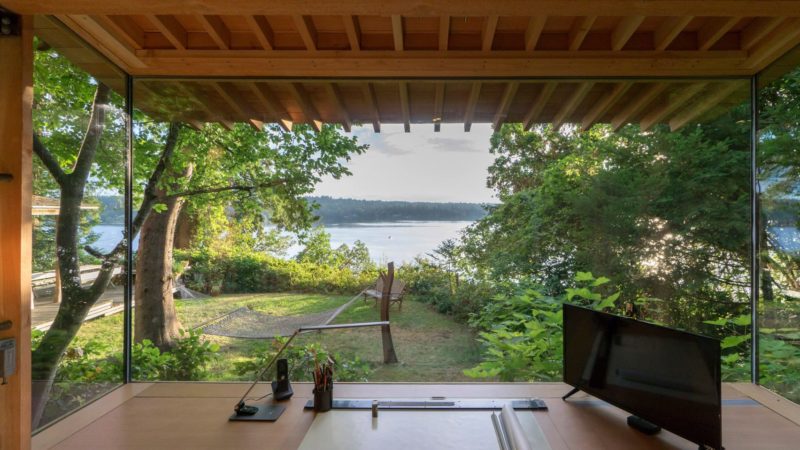 Built by principal architect James Cutler for his own use, the outbuilding is located just down a damp, verdant trail from his home, on a tiny plot formerly occupied by an old tool shed. He tore it down himself and commissioned his 12-year-old daughter to help him lay the concrete foundation and build the framing out of rough-sawn Douglas firs from a local sawmill. In the beginning, he envisioned the cabin as a design studio for himself that could double as a bunkhouse for his daughter and her friends.

To this end, the studio is highly adaptable. Though it measures a mere 80 square feet, it enjoys a feeling of spaciousness aided by generous glazing and multiple fold-away surfaces built by a local craftsman. One of the platforms tucked into the rear of the structure functions as a bunk bed. The other is a long, narrow desk that runs along the front windows for tranquil and inspiring views of the woods beyond the glass. A wood stove perches atop built-in storage in one corner. 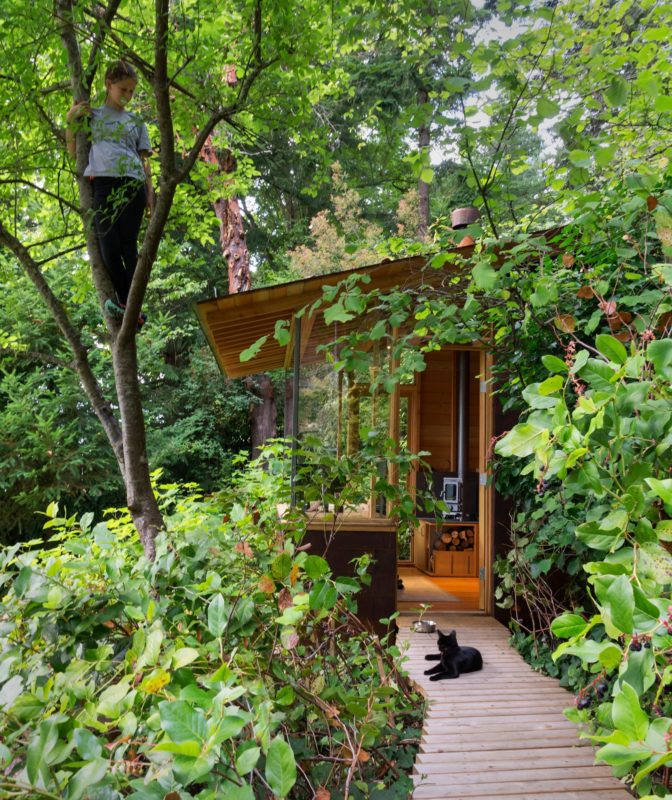 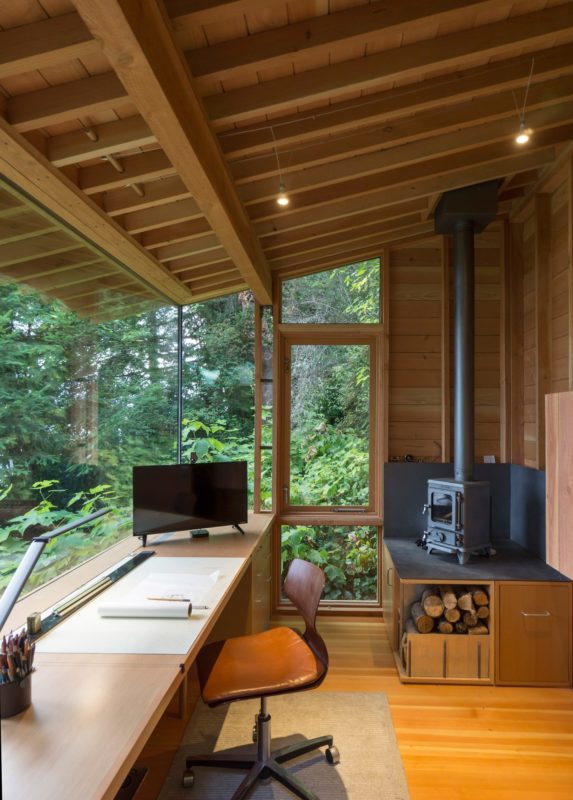 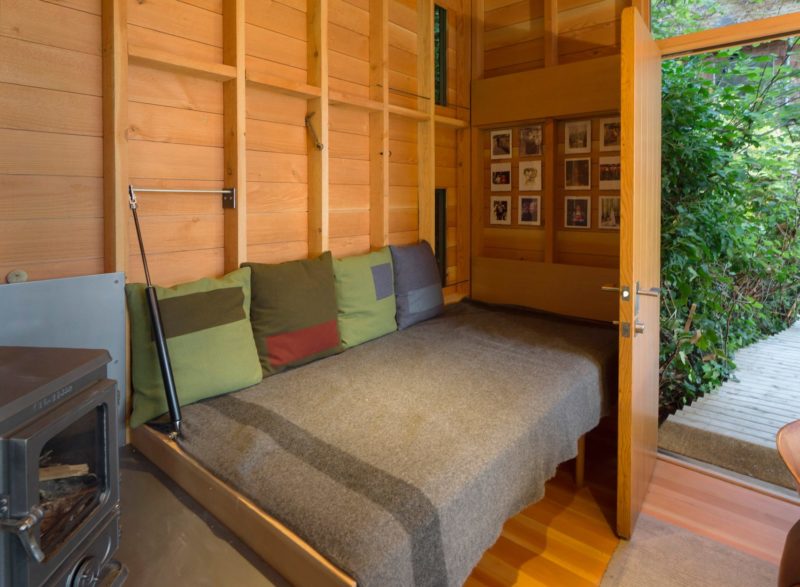 According to the architects, the bunk beds fold up on traction struts. When both the beds and the desks are folded, the room opens up, becoming a prime spot for Cutler’s poker nights. But one thing the architect didn’t anticipate during the building process was the fact that his whole family would end up using the cabin as a living room, trekking down the 30-foot walkway rain or shine to get there. The fact that they have to pass through the outdoors for access enhances the secluded feel of the building, as well as the family’s connection to the island setting.

Cutler left the interior framing lumber and exterior shiplap framing exposed for a rustic look, and placed “shingles” cut from Corten steel over rigid insulation to sheath it. The amber tones of the steel blend in with the warm, textural trunks of the cedar and madrone trees surrounding the structure. 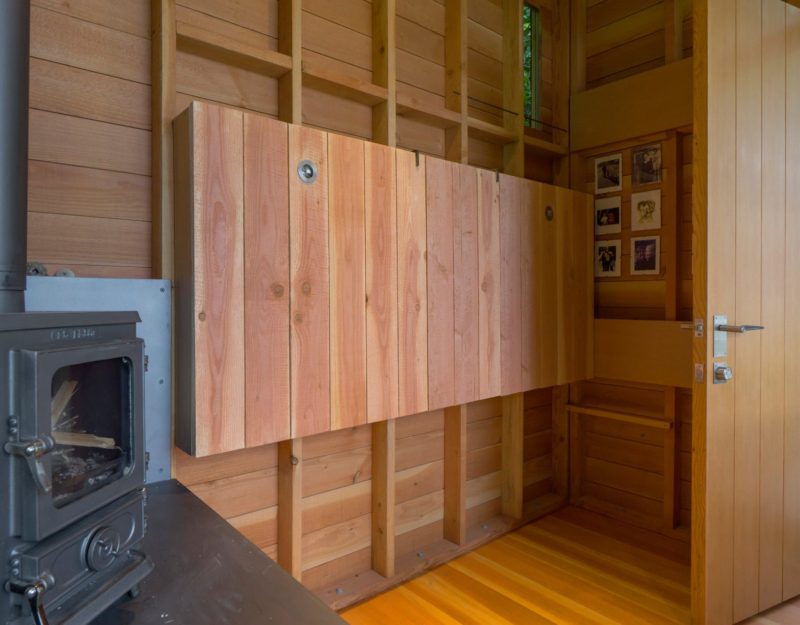 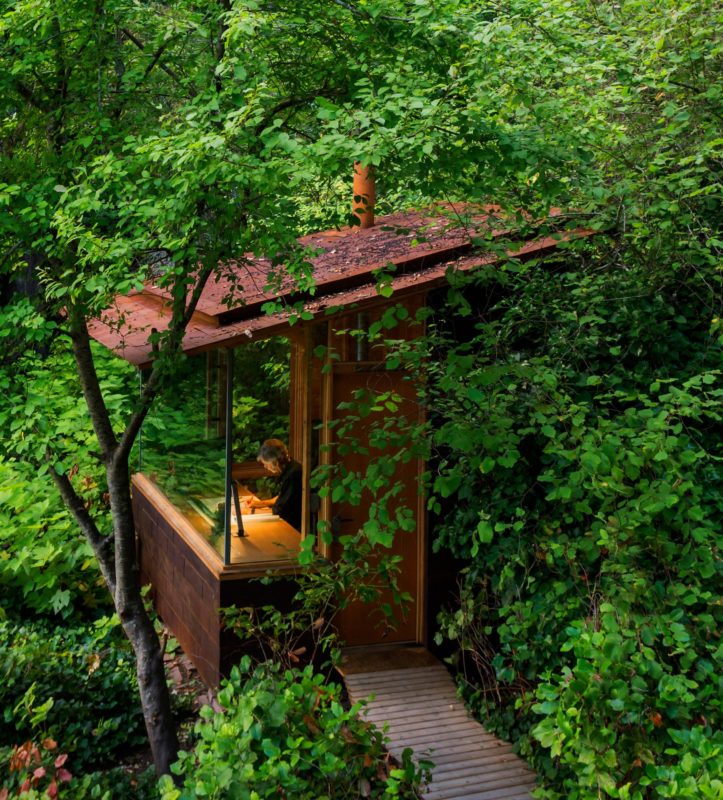 The tiny cabin even acts as an off-grid getaway during power outages, which aren’t uncommon in this windswept setting outside Seattle. Cutler installed four kilowatts worth of batteries and an inverter behind the rolling file cabinets, which power the lights, television, and a small refrigerator.

For Cutler’s daughter, the ability to have sleepovers with friends in a private space separate from her parents is a preteen dream come true. Who among us wouldn’t want a multipurpose backyard studio like this for reading, napping, creating, and socializing?