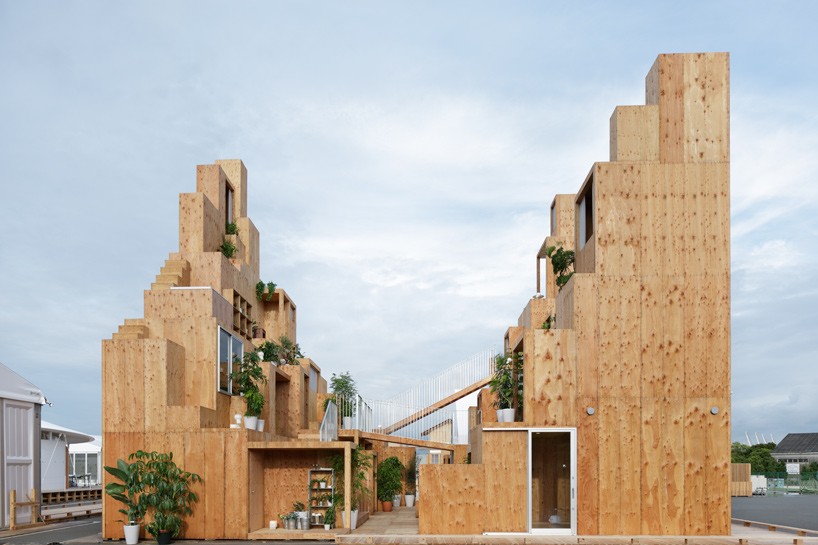 It’s rare to come across an apartment building that’s not just a big boring box, with enclosed interior passageways and maybe some balconies, if the residents are lucky. Access to private or even shared outdoor spaces is limited to nonexistent, greenery is hard to come by, and the aesthetics of the buildings are lacking to say the least, even if the architects attempt some afterthought of a visual flourish, like a splash of vivid color on the facade.

The exceptions tend to be either historic buildings that harken back to a time when developers weren’t so single-mindedly focused on the highest possible profit margin, or condominium towers with sky-high price tags, out of reach for many city dwellers. Maybe it’s time for architects and planners to start thinking outside the box – literally – as seen here in these wild timber towers. 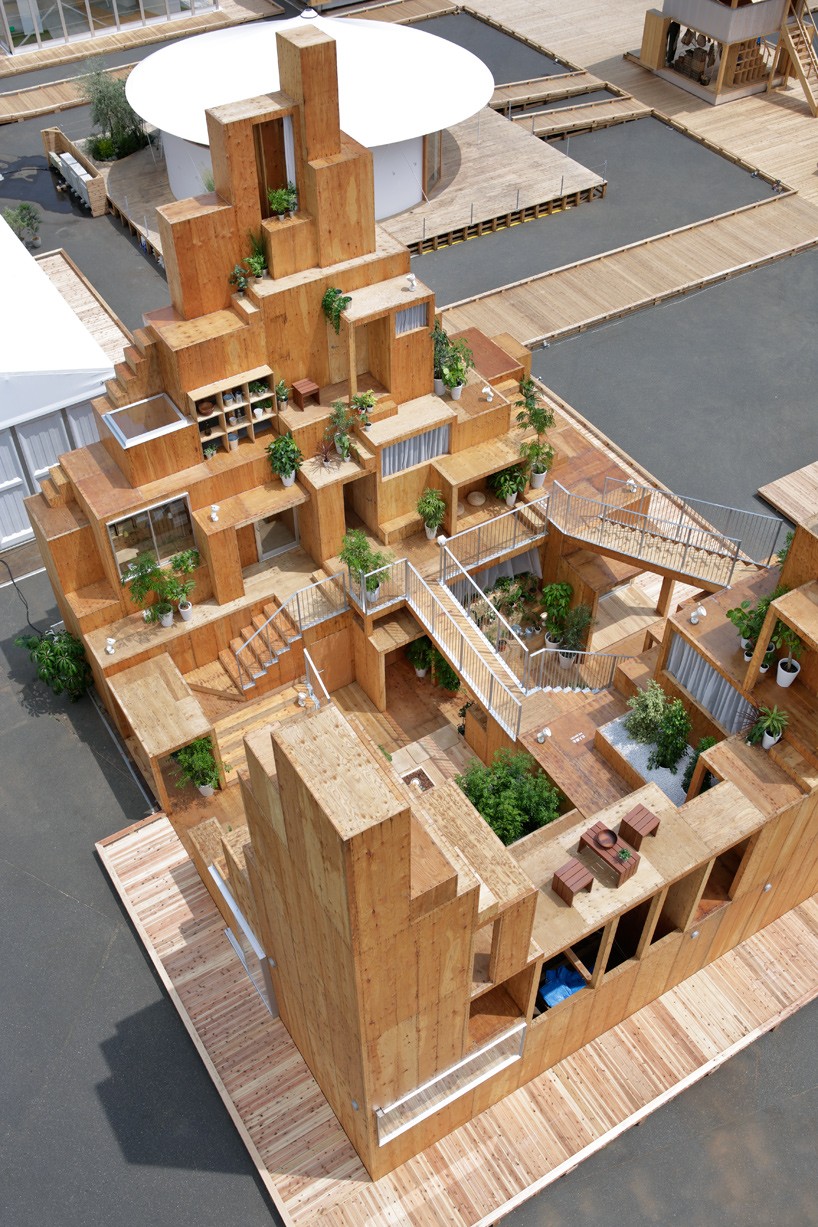 A Radical Vision for Apartment Living

As usual, famed Japanese architect Sou Fujimoto is leading by example with a proposal that departs radically from the typical look a contemporary apartment building, and from its functionality, too. Presented for House Vision 2016 Tokyo, which focuses on domesticity at the intersection of different industries, ‘Rental Space Tower’ blurs the lines between what’s yours and what’s your neighbor’s, putting the focus on communal areas. It’s an interesting idea, and the layout of the building has an unusually dynamic appearance – but does it go too far in the other direction to be viable as an alternative to the status quo? 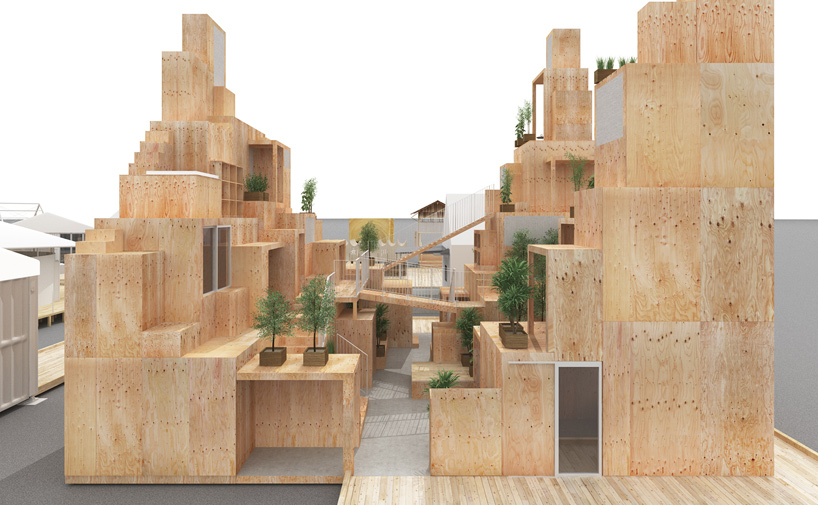 ‘Rental Space Tower’ places private areas like bedrooms in defined interior spaces, effectively minimizing the area of your apartment that’s just yours in order to maximize the overall amount of space to which you have access as a resident. That means instead of just having a small living room and kitchen, you’ve got a spacious common area to work with including a spa-sized tub, high-end kitchen, gardens, an extensive library and a movie-theater-style projection screen for taking in media. The idea is that instead of having just a few dull corridors connecting your private apartment to those of your neighbors, you’ll have vibrant communal areas to enjoy. 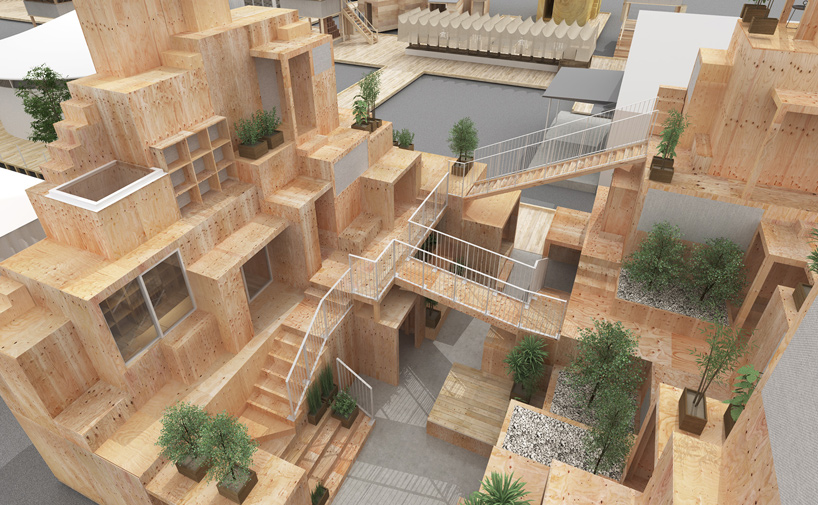 Taking a look at the model Fujimoto built for the exhibit, we can see that the private areas are contained within stacked wooden boxes, looking almost like something a child would build with a set of blocks. Those living on the highest levels can use the roofs of their downstairs neighbors’ living quarters as outdoor space, and two separate wings are connected via a ground-level courtyard and a series of bridges and staircases. There’s lots of room for plants, patio sets and lounging, an arrangement that would work particularly well in locales with temperate climates where indoor/outdoor spaces can be used year-round. 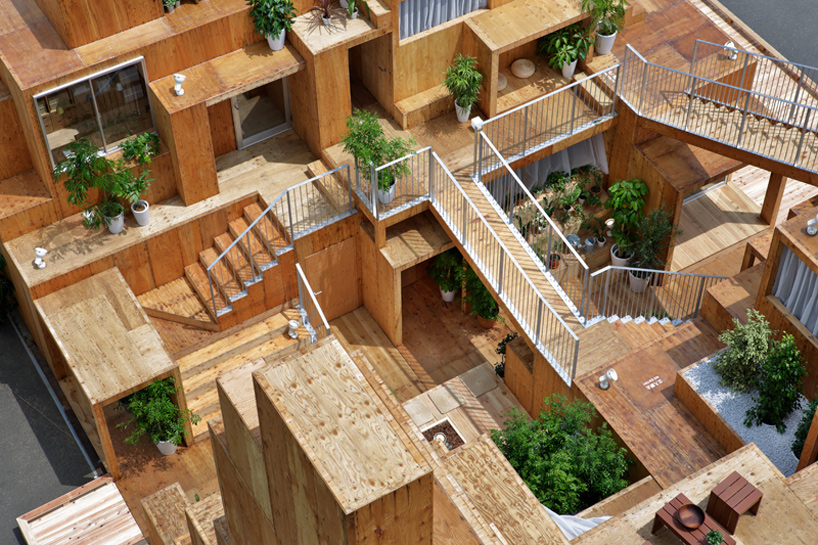 The downside of this setup is that it can feel like a dormitory, and you have no control over how your neighbors are using the shared spaces, especially since people have different sleep schedules and needs for quiet or social time. Can you trust the teenagers next door not to take over the movie screen at all times, or another neighbor not to hog the tub? These are the variables that can make communal living tough for all but the most dedicated.

In all reality, Fujimoto’s concept represents a way of pooling resources that need to be adapted for greater livability. However, the look of the towers is an intriguing departure from the norm. It would be nice to see apartment buildings that find a balance between radical communality and solemn segregation, with dynamic floor plans that integrate shared spaces in a way that feels like a more natural progression from current designs.