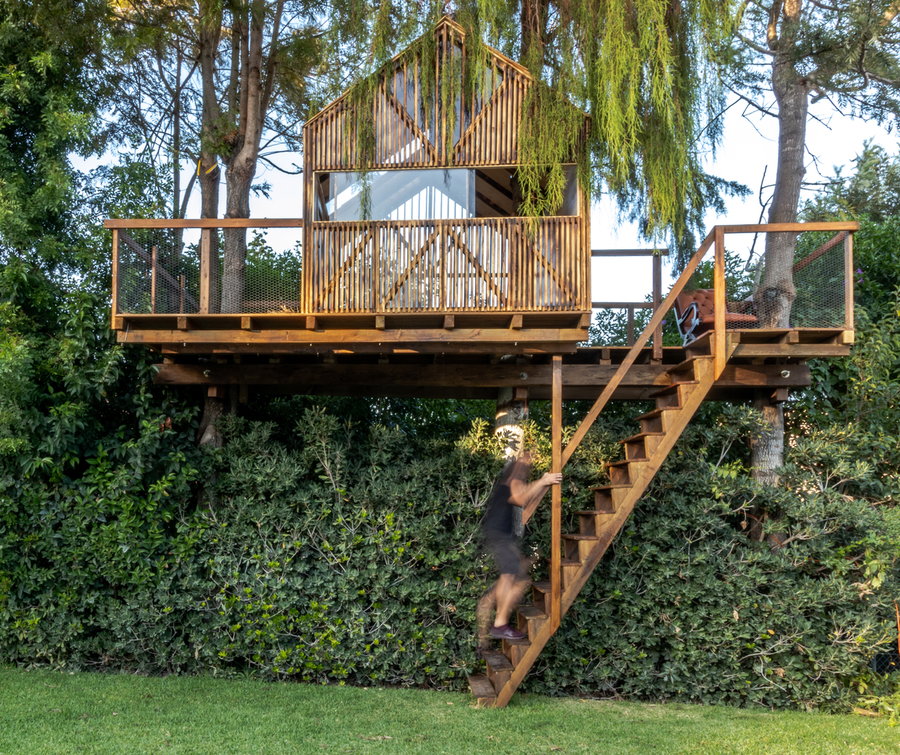 Most treehouses are humbly but lovingly constructed, consisting of little more than some scrap wood nailed to the trunk of a tree to form steps, a platform, and perhaps a railing and a roof. Of course, they can also be much more than that. People around the world build them to the scale of castles, with all kinds of fancy bells and whistles, whether they’re still intended for kids, used as vacation retreats for adults, or offering extra cool settings for workshops and classes.

A new treehouse in Cascais, Portugal falls somewhere in the middle, bringing modern sensibilities to a full-scale space that a grandfather has envisioned for his grandchildren. Portuguese design firm Madeiguincho is known for its carpentry and joinery prowess, often marrying wood with other materials like metal and stone in small structures like tiny houses, garden studios, and even shelters for animals. They also create custom wooden furniture on demand. 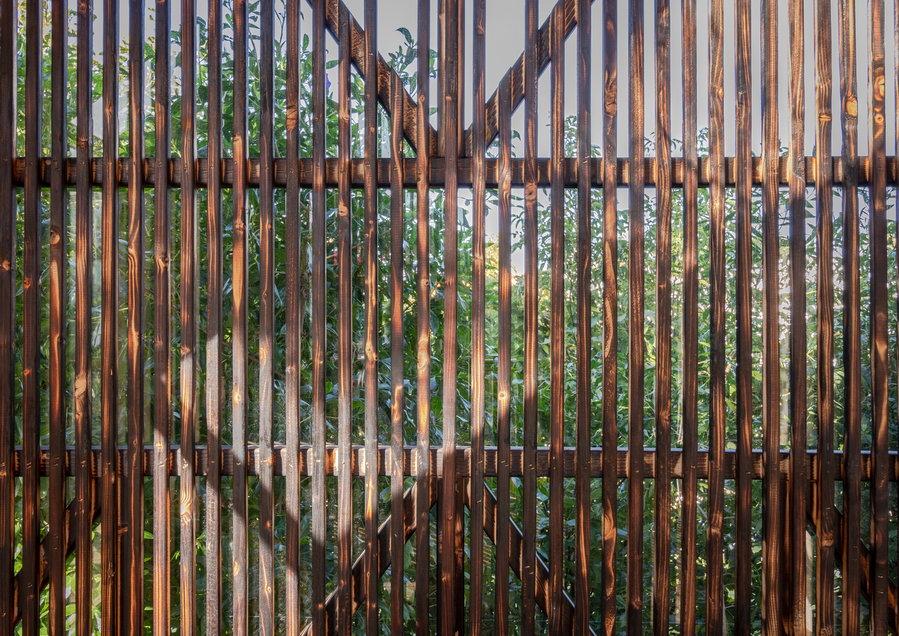 For the simply named “Treehouse for Grandchildren,” Madeiguincho created a full-scale space on a platform that looks like it could almost function as a second home. Supported by three strong trees, which grow up and through its floor and ceiling, the treehouse features slatted wood walls and large openings to the outdoors to facilitate free air circulation and regulation of sunlight inside. Elevated about a full story off the ground, it’s accessed by a staircase and measures about 15 square meters (161 square feet).

The architects explain: “This shelter was designed to include three trees in the project. A cedar that crosses the project and two tipuan that can delimit the platform. The support platform is supported by the three tree trunks and receives the house built in CLT panels and a cedar roof.” 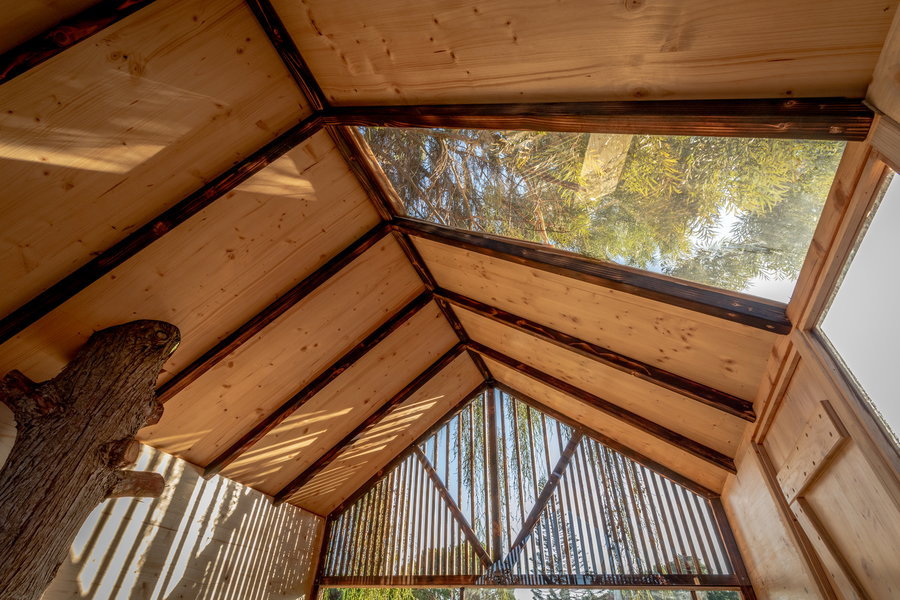 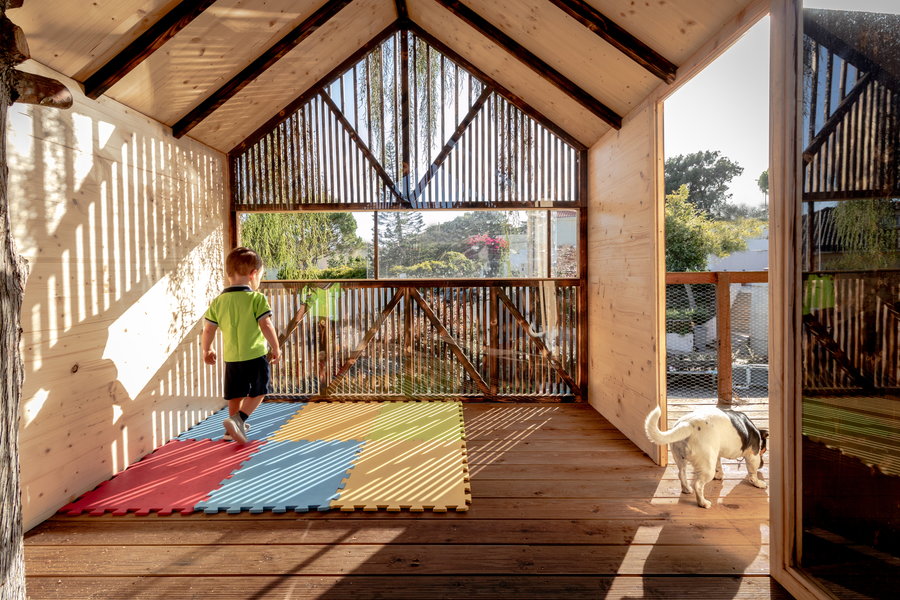 “The entire exterior of the house was burned to better preserve the wood and subsequently bathed in linseed oil, allowing [it] to gain a cool and raw texture. This contrasts with a cleaner, warmer interior, with a natural wood texture, lightly treated with a matte oil. The natural light openings prevail in East-West orientation to get a better view of the sunrise and sunset.”

Looking at the photos, you can see there’s no question this treehouse wasn’t made by amateurs. It feels sturdy and contemporary, ready to be glassed in for use as guest quarters or a backyard studio once the children are grown. The contrast of light and pale wood tones gives its interior a lot of visual interest, too, and a sizable deck offers views of the adjacent home and swimming pool. 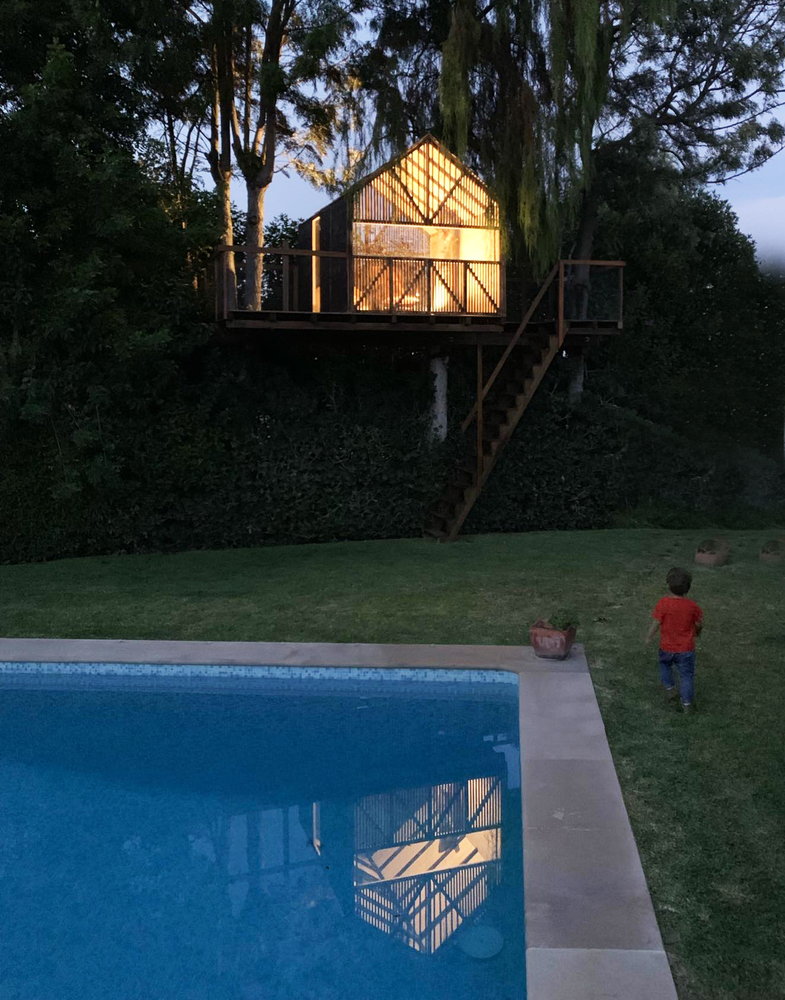 Browsing Madeiguincho’s other projects on Instagram, the skills and craftsmanship that have gone into this project become clear. The firm displays a love for beautiful wood, a strong proficiency at creating beautiful joints without the use of modern fasteners, and a knack for the kind of raw simplicity that leads to beautiful, professional-looking results infused with the traditions of the past.

When you were a kid, would you have wanted something like “Treehouse for Grandchildren,” which feels like it’s on par with structures made for adults, or do you prefer the smaller and more ordinary treehouses family members often build for their children?