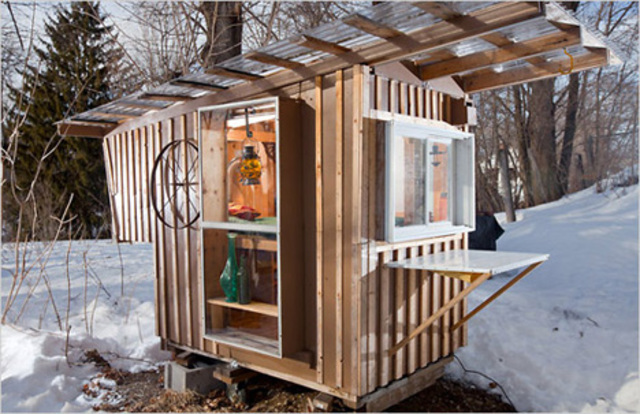 He’s been called a “micro-architect” and a genius of small house design, but Derek Diedricksen is really more of a big thinker. His impressively tiny 32-square-foot micro-home, affectionately known as the “Gypsy Junker,” is maybe one of the most well-known tiny houses ever built. And now, it’s for sale with an equally tiny price tag. 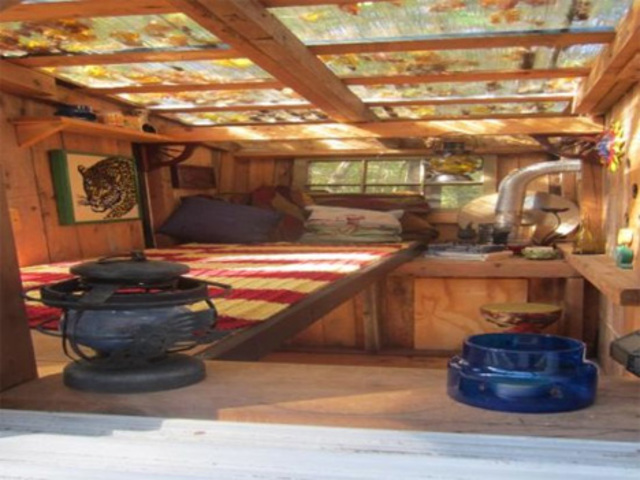 Diedricksen is known for his skill in building the kind of itty-bitty tiny home that most people don’t think they could ever live in. The Gypsy Junker is so tiny that only the most intrepid small-home enthusiast could live there permanently, but it would make for the perfect backyard office or temporary getaway cabin. With only 5’10” of headspace, though, taller residents would need to get used to stooping as they walk from one end of the structure to the other. 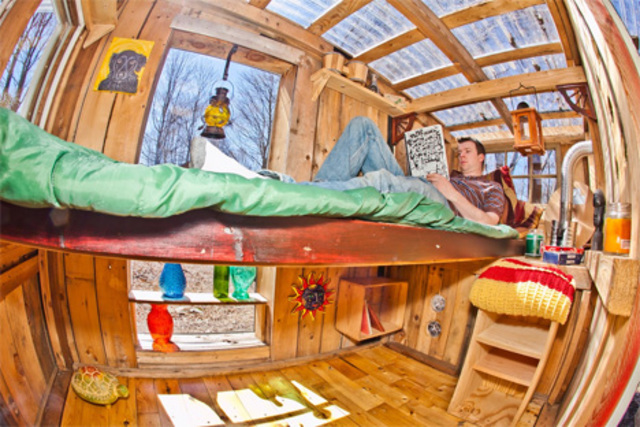 Continue reading below
Our Featured Videos
The micro home was built in 2010, mostly from recycled and salvaged materials. Discarded shipping pallets make up a large part of the structure, while recycled storm windows and salvaged kitchen cabinets give it a distinctive character and home-like feel. The bed bunk doubles as a desk, and with one person on it and two on the floor the tiny home can sleep three – though probably not very comfortably.

The incredible home is being sold to make room for other projects that Diedricksen is building in his back yard. Although it was built for nearly free with materials most people would call “junk,” the time and labor he put into the project are evident: since it was built, it has withstood two hurricanes and a few harsh Northeast winters.

From The New York Times:

Sawed-off yellow, blue and green wine bottle bottoms make for a colorful lower-level window in the guest area, and there is a heating unit with an exterior vent built from a frying-pan base, with a broken brass cymbal that serves as a heat reflector. (Vegetable oil is the suggested fuel.) The most expensive items were the four sheets of corrugated plastic on the roof, which came to $80.

What did Mr. Diedricksen envision the Gypsy Junker as being?

“Originally, it was going to be a place to brainstorm for my book and my designs,” he says. “There’s no better place than inside someplace that is unconventional and bizarre. It helps you think outside the box instead of sitting in some white-walled room. And my son’s first camp-out was here.”