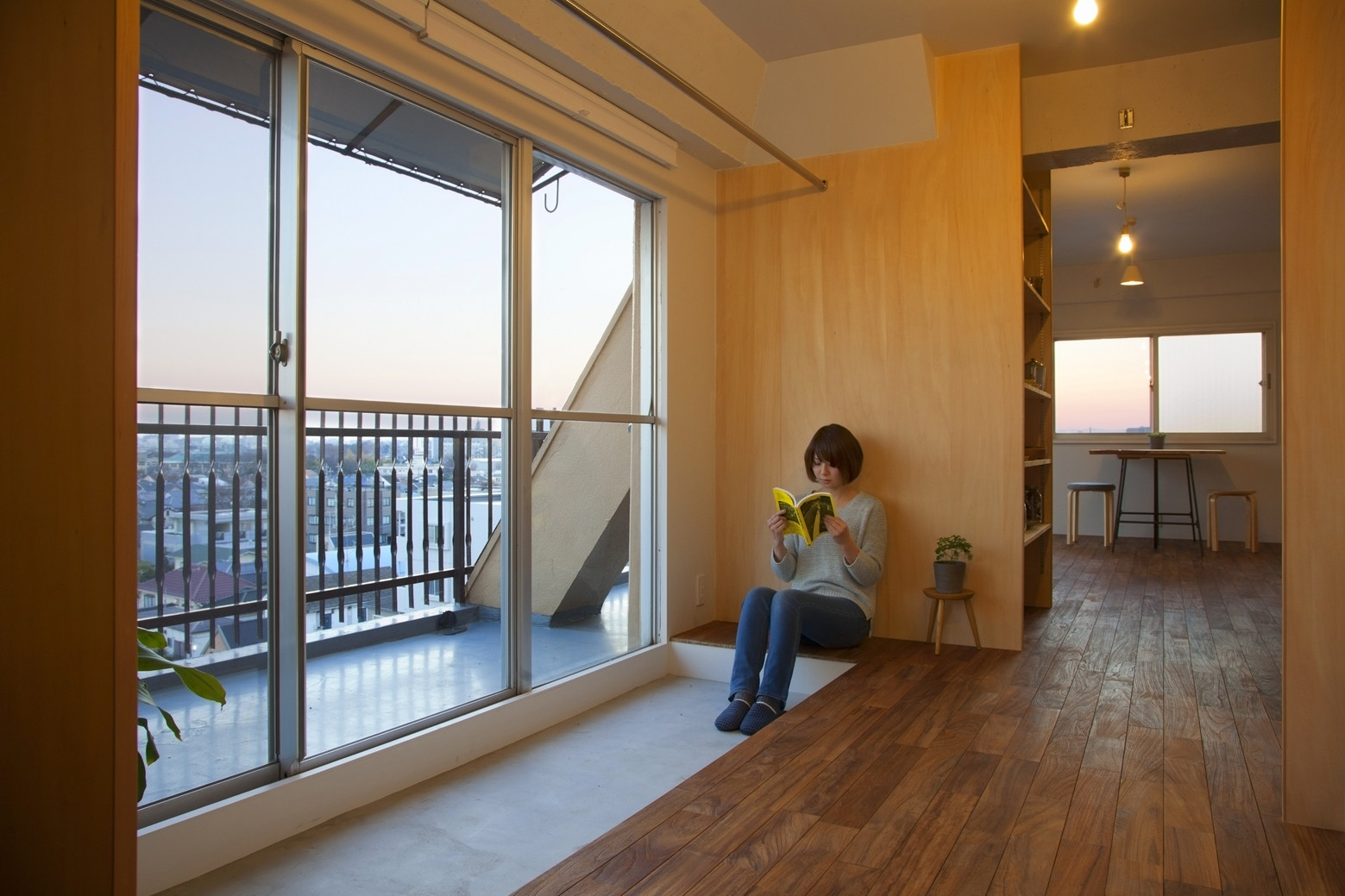 A tiny apartment in Nishitokyo-shi, Tokyo was in serious need of a makeover. Its 50 square meter (164 square feet) area was filled with plenty of sunshine, but the flow of the home seemed wrong: a bedroom on one end, kitchen/dining room in the middle, and Japanese room at the other end. 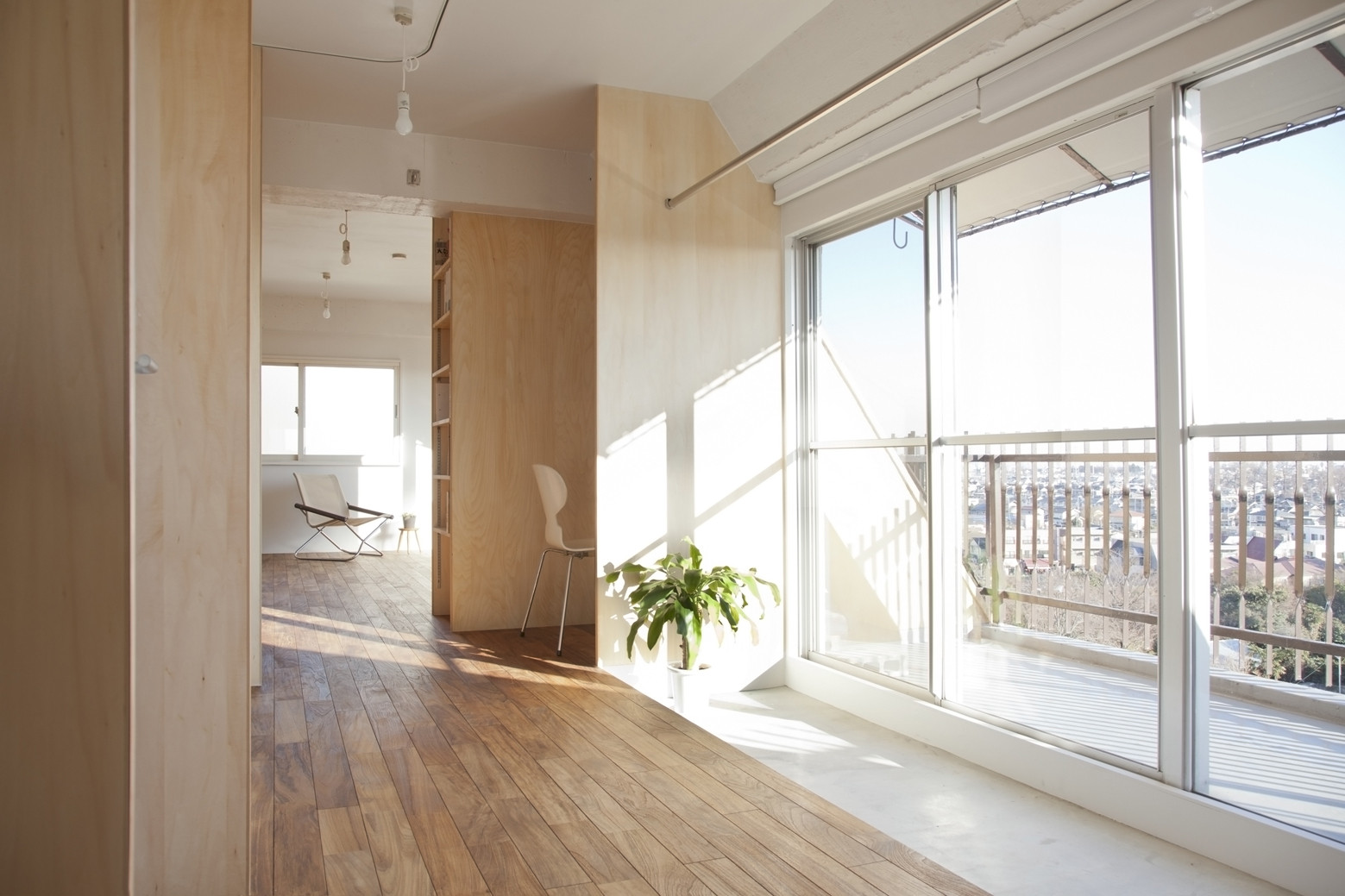 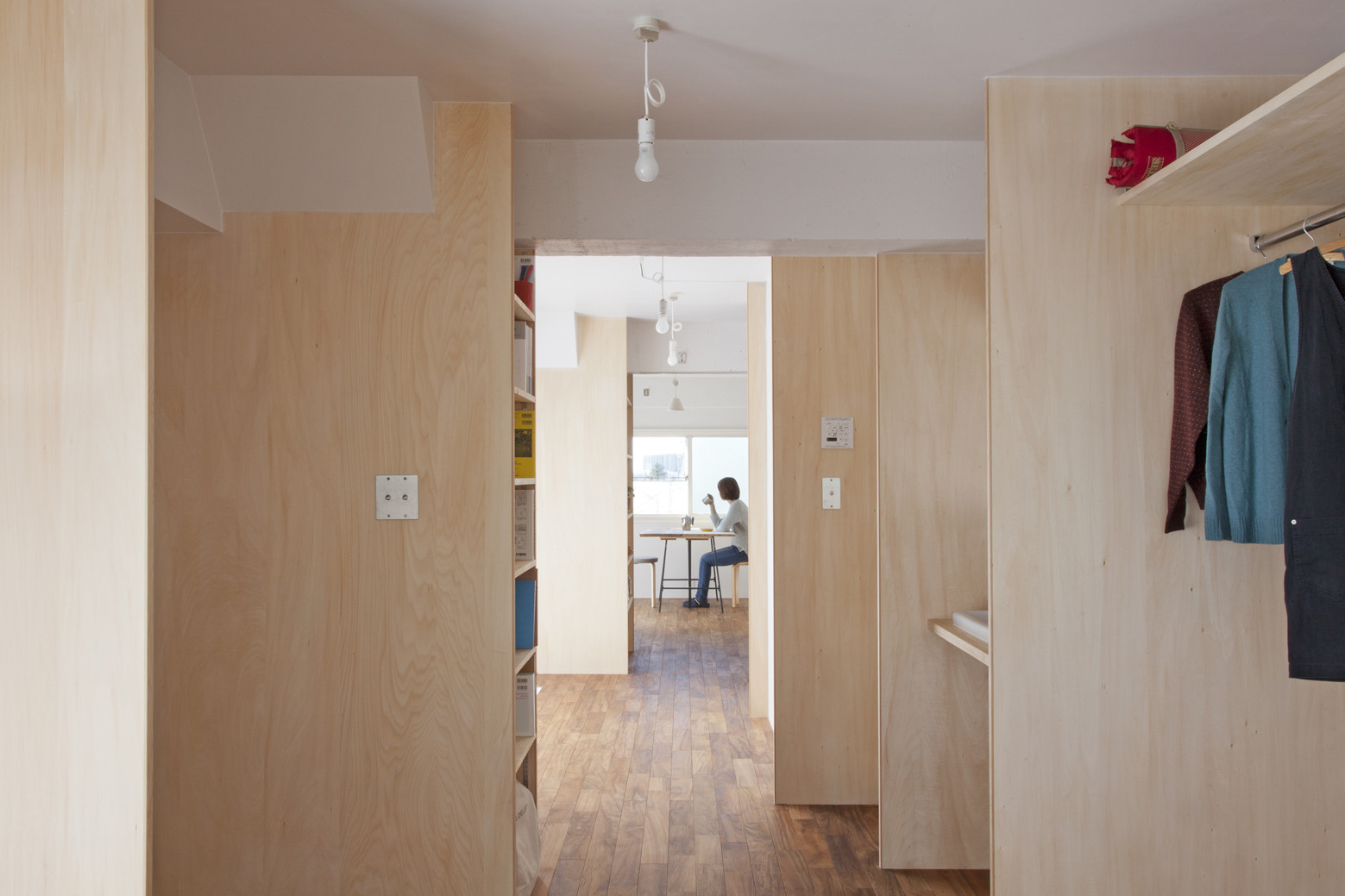 Architectural design firm Camp Design, Inc. rearranged the Wing Wall House’s functions and added a series of wood partitions to create a series of segments and mini-rooms. It is truly amazing how a simple reprogramming of an existing space can transform the entire look and feel of the home, making it feel much larger than it is. 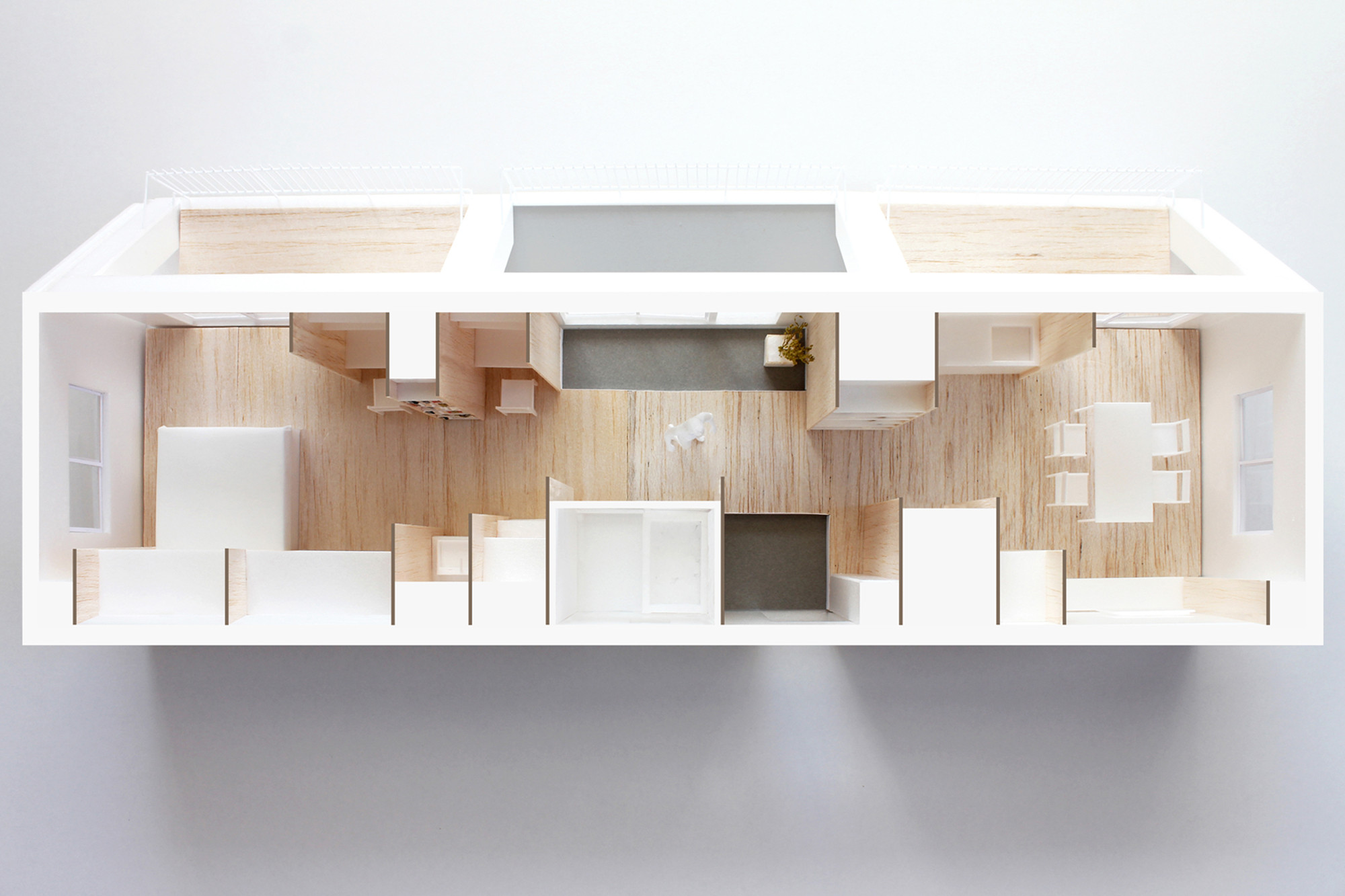 The flow of the apartment was made more intuitive and natural: bedroom at one end; kitchen, bathroom, and small study area in the middle; and living/dining area at the other end. (Above: the old floor plan on top and the new floor plan under it.)

The wooden partitions create visual separations of space without crowding the apartment or making the already-tiny space seem smaller. Natural light from large windows and a large sliding glass balcony door fill the home with sunshine and a perceived sense of space. 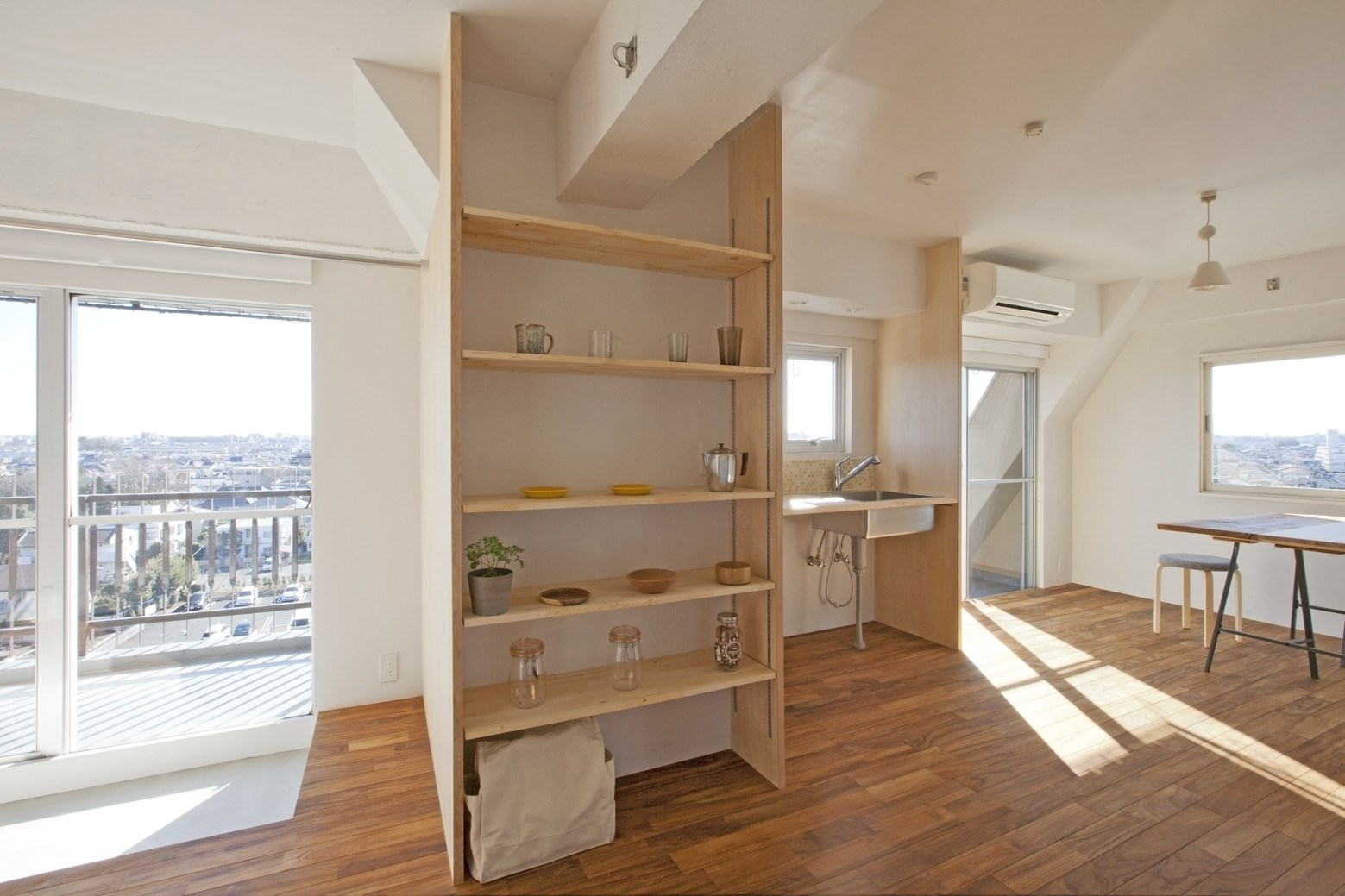 Wooden shelving units blend in with the added wooden partitions to create a small storage space in the kitchen area. A study nook sits to one side of the balcony while a doma, a traditional Japanese raised area, occupies the other side.

“The multilayer one room by a wing wall –  This is a renovation project of one room of an apartment for a young couple. This room is a long and slender plan of about 50㎡, and view and sunny are very good. I considered adopting fully the environment which surrounds this room. Moreover, even a shelf and furniture were wanted to build a client by themselves after completion. Since we did not become chaos even if a thing and our furniture increase, we thought that we would set up order with a wing wall.”

“And also a wing wall make a hiding place, articulating space gently. This long and slender one room becomes the multilayer space besides more various domains overlap. We thought that it would reconstruct to the living environment which included the context and the life style only by changing into a wing wall the wall which had divided the room.”