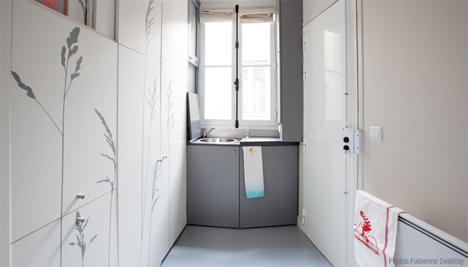 Could you possibly live in an apartment that occupies only 8 square meters? French firm Kitoko Studio undertook the project and turned the former maid’s room into a fully functional apartment. They used some surprising tricks and hidden secrets to create what they call “Swiss Army knife” housing. It may look simple at first glance, but when you begin unfolding all of the treasures within you see just how much was able to hide under the uncomplicated surface. 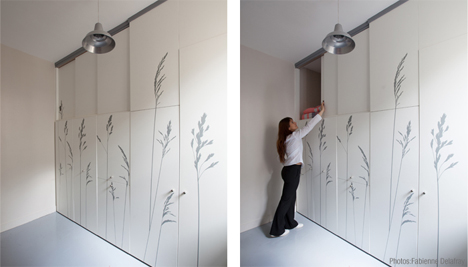 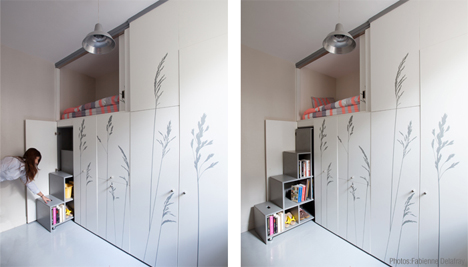 Whatever your personal feelings about Emperor Louis-Napoléon Bonaparte, he did accomplish a large-scale improvement of Parisian housing. Under his command, old and unsafe buildings were torn down to make way for new sanitation and housing infrastructures. The homes built during this time are known collectively as the Haussmann buildings, named after Georges-Eugène Haussmann, the prefect of the Seine at the time. The Haussmann buildings are known for their maid’s rooms which occupy the top floors just below the roofs. 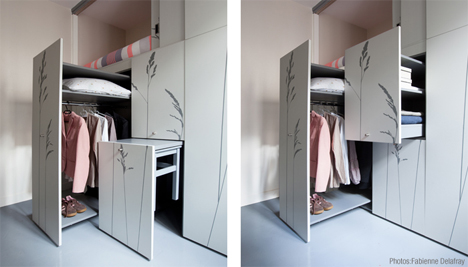 The maid’s rooms were not built for comfort, space, or beauty. As property values started to rise in Paris, people began to pay more attention to the space used for these maid’s rooms. One couple, in preparation for the arrival of their future au pair, decided to turn this tiny but useful space into an apartment. But no au pair would want to live in the stark, utilitarian maid’s room of the past, so they gave instructions to make the space suitable for sleeping, cooking, eating, washing, working, and relaxing, plus ample storage – a tall order for such a tiny room. 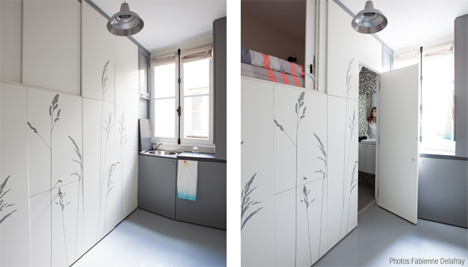 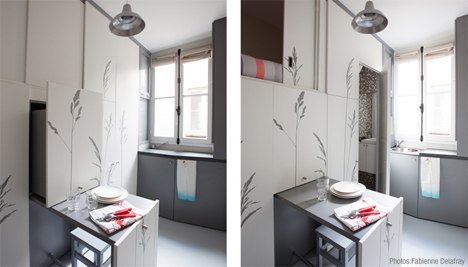 Kitoko Studio responded to the challenge by employing a sort of large closet that takes up about half of the room’s volume. In this closet is hidden nearly everything the resident needs for daily life. A small bookcase pulls out of the closet on the bottom left corner, acting both as storage and as a staircase to climb to the loft bed above. Other compartments in the closet provide for more storage. 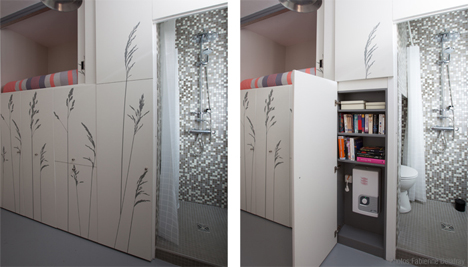 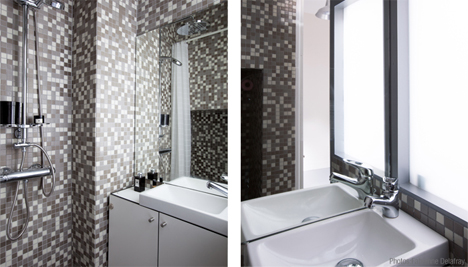 A dining table and chairs are hidden in one of the compartments. The table can be removed entirely and placed in the middle of the floor space to make it feel more like a proper dining area. The chairs are neatly attached to the underside of the table when they are stored, using up the otherwise-unused space under the table. The apartment’s bathroom is tiny, but fully functional – and as anyone who has shared a house knows, having a private bathroom is akin to winning the lottery. 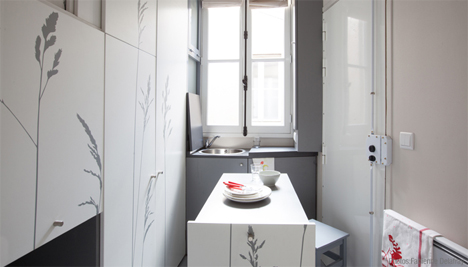 In the kitchenette, the sink and cooktop can be covered to provide counter space when they are not being used. The flexibility of this teeny-tiny apartment is inspirational; different components can be pulled out and used at different times, giving the occupant the power to decide how the space will be defined from one moment to the next.