When big cities need to scrounge up developable land for their expanding populations, they often turn to underutilized industrial areas that occupy what would otherwise be prime real estate. In the Eastern port of Amsterdam, a new neighborhood called Cruquiuseiland is developing into a mixed urban quarter for living and working along the junction of two waterways. 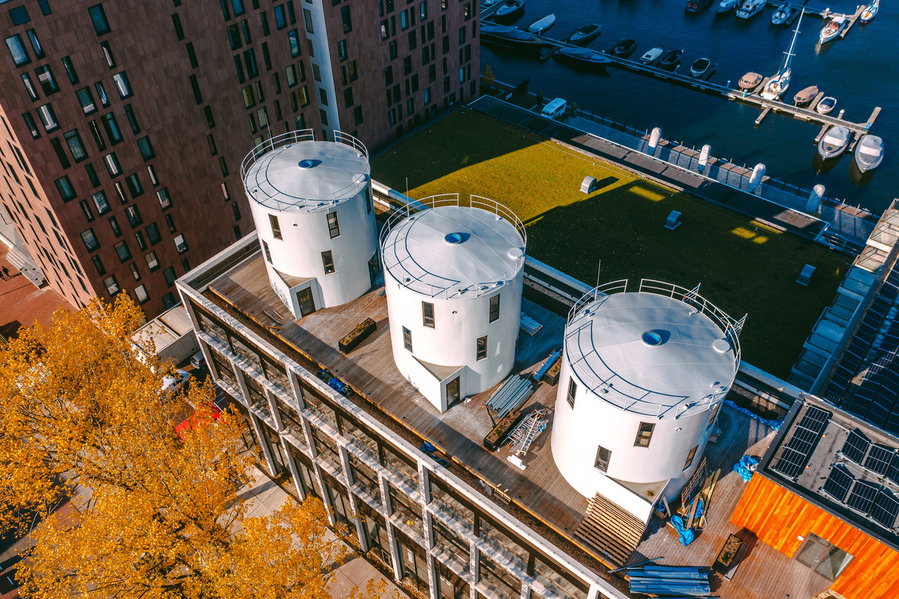 For decades, this area has no longer served its purpose as a port system, since the waters are too shallow for modern ships. It grew derelict over time and felt disconnected from the community. Today, it’s becoming a lively destination full of interesting architecture that combines older existing buildings with new construction. Project Harbour Club is one of those buildings, boasting three massive salvaged wine silos converted into rooftop homes as its defining feature. 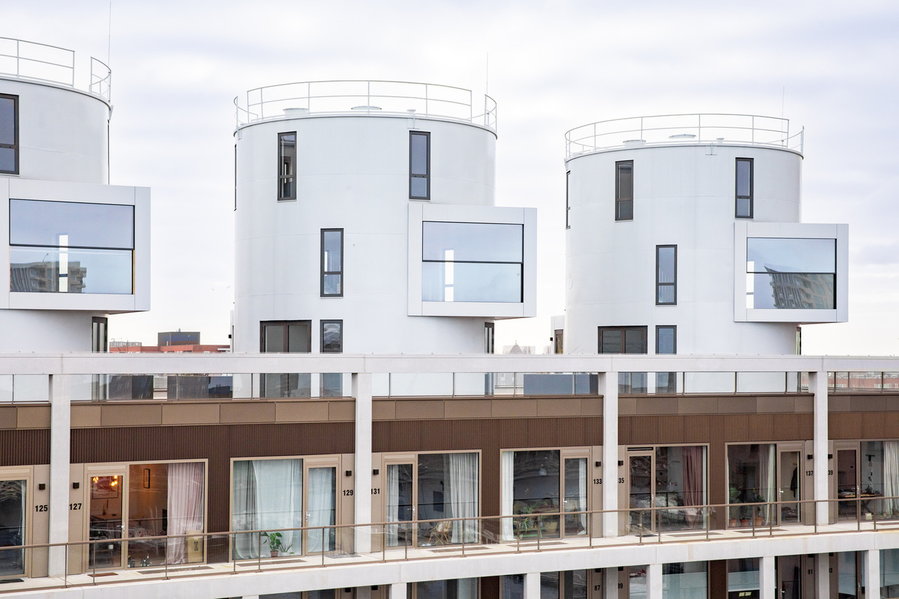 Dutch firm LEVS architecten turned the original low-lying 1901 dock terminal facility and wine warehouse into a nightclub and restaurant that connects to a new six-story L-shaped residential building, which hugs it on two sides. The project offers 81 starter homes, three luxury townhouses, and five live/work homes, as well as the event spaces. Placing a booming club adjacent to housing might seem like poor planning, but the architects integrated a ton of soundproofing as well as buffer spaces in between, reducing vibrations and sound. 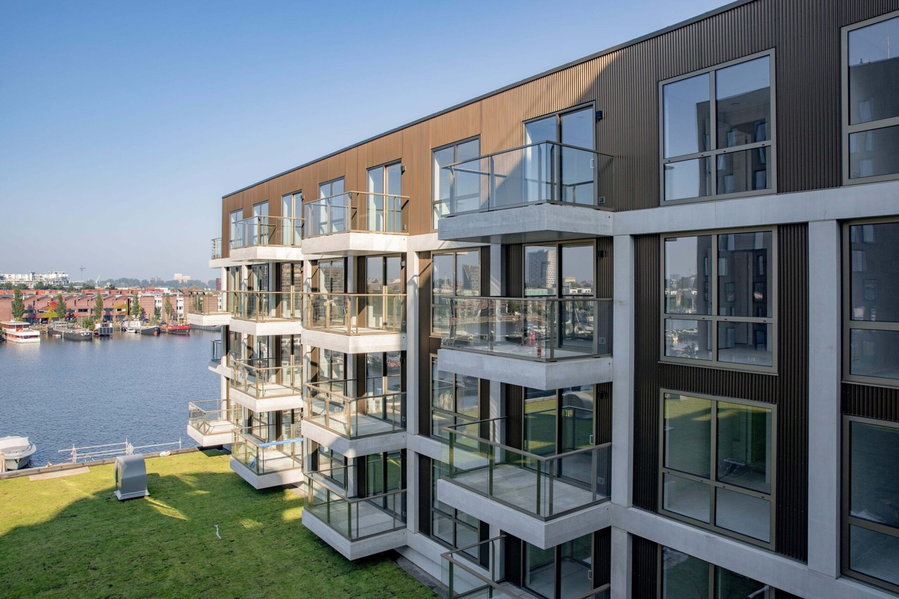 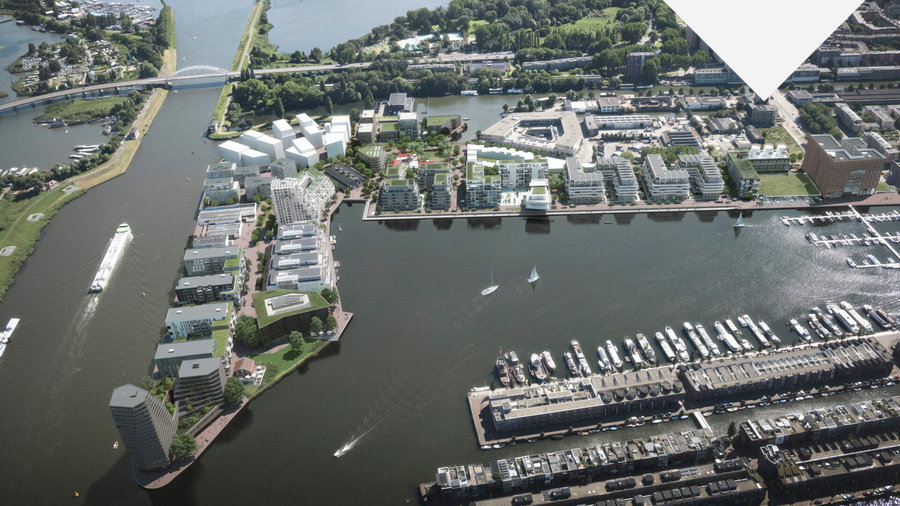 The architects explain that “the Harbour Club’s new event space is located on the lower three floors on the Cruquiusweg. Using the box-in-a-box principle, the space has been completely disconnected from the other functions in the building in order to prevent noise nuisance. The box with its own foundation consists of a steel frame with precast concrete. Above it, houses with a through lounge float, supported by four 16-meter-long beams. A second, glass skin also forms a buffer zone and serves as a foyer.” 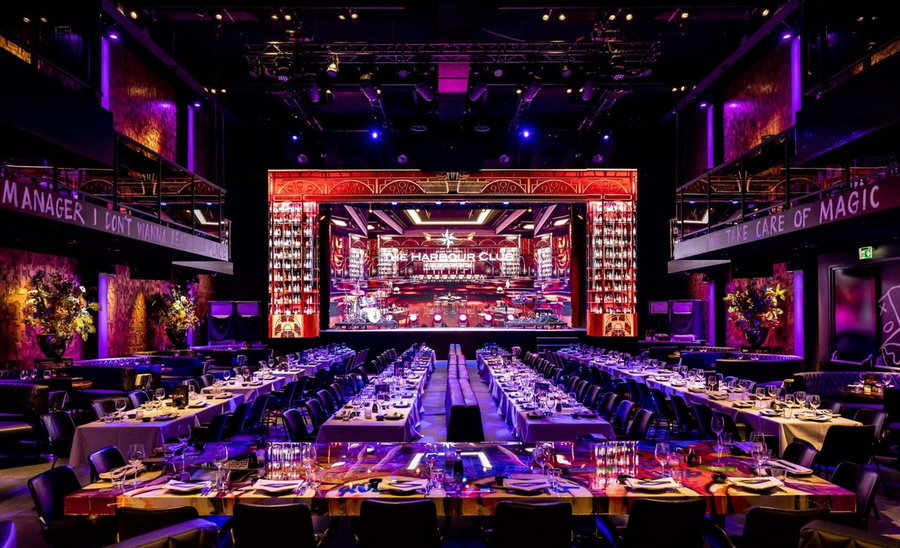 During renovations to remove an adjacent 1990s industrial hall, the architects uncovered the original brick facade of the building, which lends a sense of age and texture to the restaurant along with the wine warehouse’s old wooden beams. The preserved porthole-style windows enhance the building’s connection to its shipping industry history. Planted with mossy sedum, the roof of this structure is now a shared outdoor space for residents of the building. 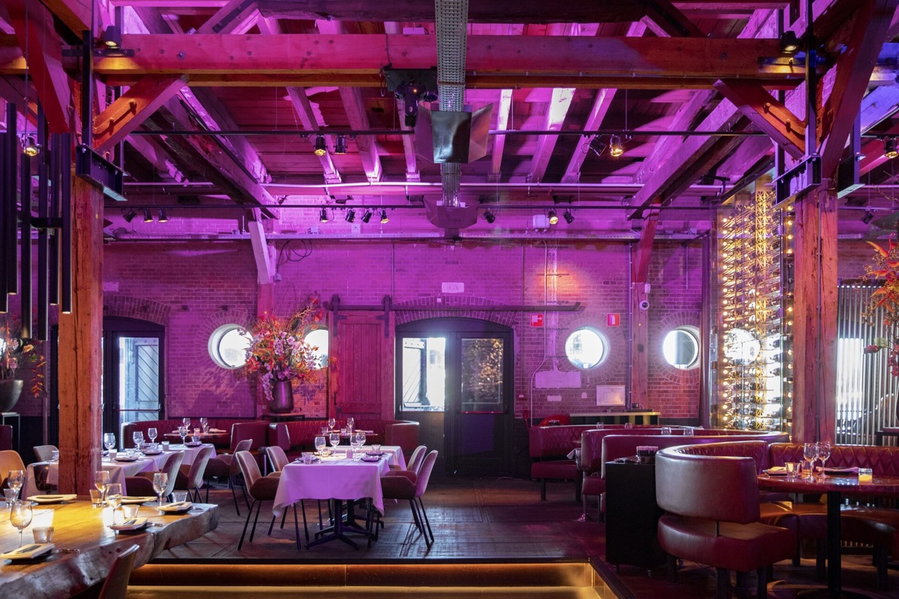 Naturally, those huge industrial wine silos are the star of the show. They once stored wine destined for the Dutch market, and they had to be decontaminated and lifted over a line of trees to be installed. “They have been preserved as icons of the island’s history and have been given a new function as elevated luxury town houses,” the architects add. “The three-story dwellings stand on a communal roof terrace in a green landscape. They are rotated slightly to provide the best possible view from the new panoramic window.”

The residents of these luxury units might have the best views of all, but the “starter homes” definitely aren’t bad, either. Some are studios set above the event hall, and others cantilever 16 feet over the old warehouse on the restaurant side. Their half-covered balconies offer privacy while overlooking the harbor and green roof. 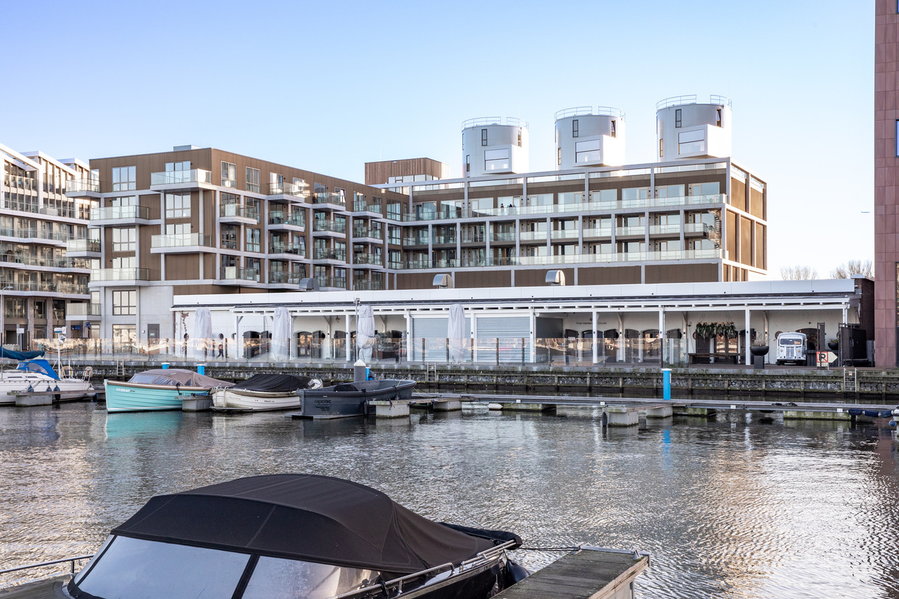 “Harbour Club is a multi-level challenge: technically, programmatically, and architecturally,” the architects say. “The combined necessities of affordable densification, restoration of monuments, [and] climate mitigation and adaptation need to be addressed simultaneously. Harbour Club is a contemporary answer, characterized by unconventional solutions.”