What design choices would you make to create an apartment that screams “David Bowie”? Paying proper tribute to one of the greatest rock and roll icons of all time is no easy task, but Sophie van Winden and Simone Gordon of London’s Owl Interior Design were up to the challenge. The duo was approached by an unnamed (but apparently very famous) British singer to draw inspiration from his most prized possession: a portrait of the Starman himself from his Ziggy Stardust period. 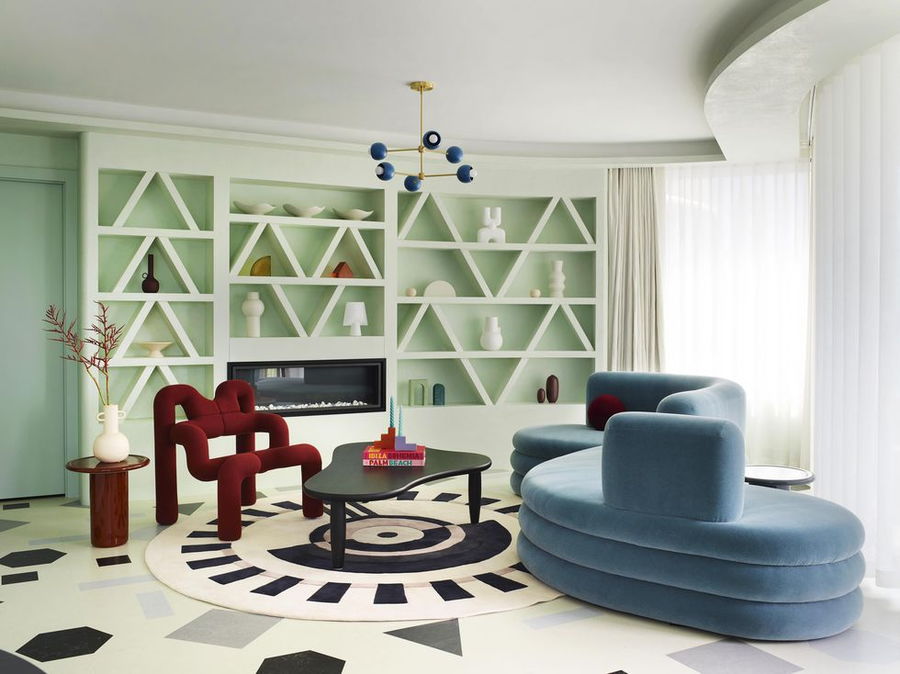 The unnamed singer purchased a three-bedroom apartment in a 25-story Foster + Partners complex on the banks of the River Thames, and though it had amazing views, it was basically a blank slate full of way too many beige surfaces. He wanted its interiors to be more engaging than the city outside, a perfect setting for parties full of movers and shakers. It also had to be substantially different from his other home, a converted barn in the countryside. 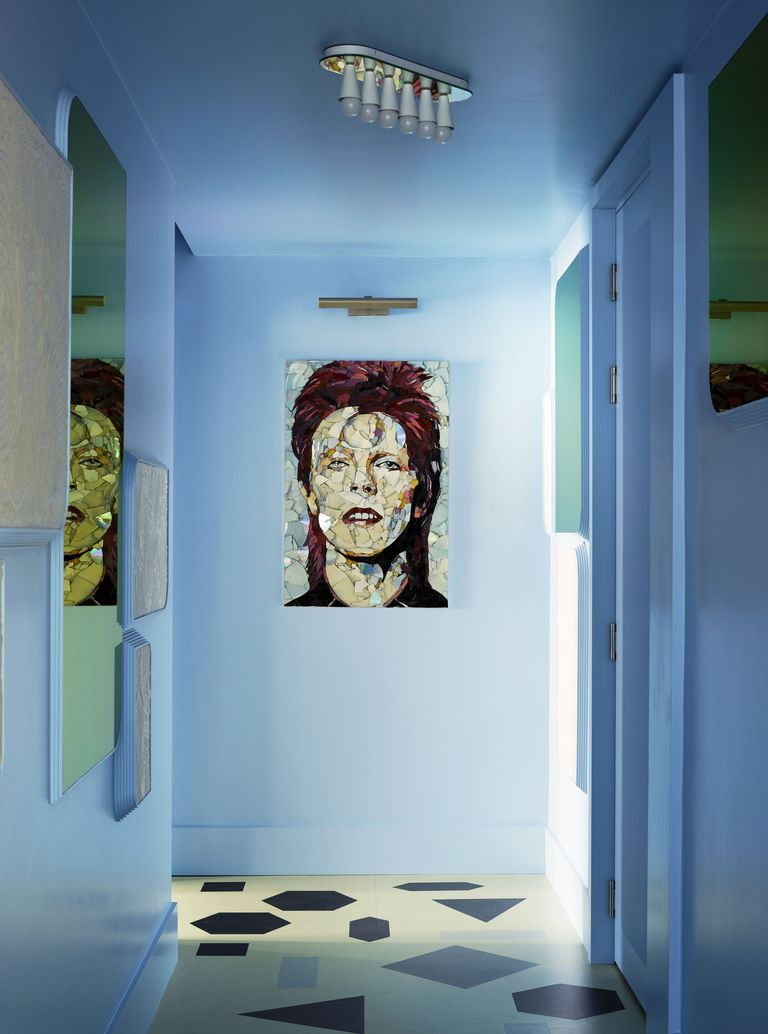 The artwork, itself a tight closeup on Bowie’s face, is a collage-style portrait with a faceted geometric effect. Its soft tones of blue, gold, and the dark red shock of hair provided the mood and the base palette for the space. Though the inspiration is retro, the designers still wanted the apartment to feel contemporary, so they started by ripping out the old wood floors and replacing them with marmoleum, an eco-friendly natural material that’s easy to clean. This new surface is covered in a custom pattern, with black and pale blue shapes dancing across an off-white background.

“The open and adventurous nature of the brief allowed for a bold use of color and form,” the designers explain. “Sculptural, flowing shapes echo the curved lines of the architecture, while bespoke-made pieces such as a coral-colored drinks cabinet add moments of surprise. The lively design vernacular carries through the whole apartment, including a glittering sequined toilet (complete with disco ball) that plays David Bowie’s ‘Let’s Dance’ on a loop.” 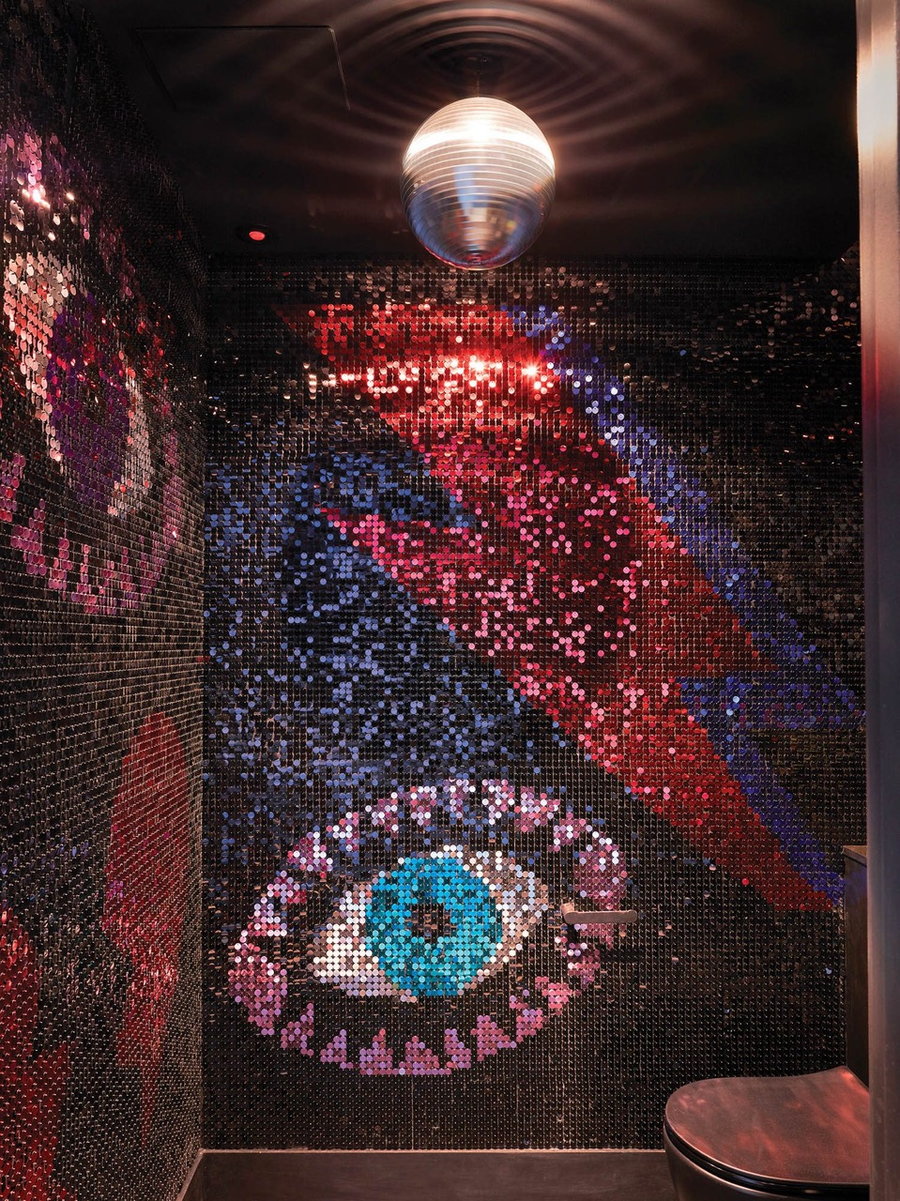 With a bathroom as eccentric as that, the rest of the apartment had to have its own elements of delight. They come in the form of unexpected shapes and colors, like the triangular bookshelves in the living room, a graphic rug, and new kitchen tiles in a bold grid pattern. In fact, bold geometric patterns are virtually everywhere in the home, including the wallpaper, curtains, and headboards in the bedrooms, a series of custom black-and-white closet doors, and additional wall art. 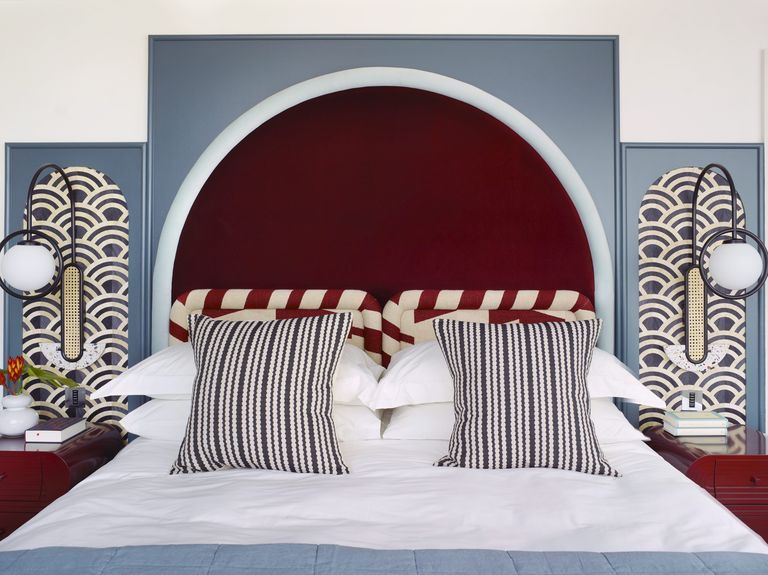 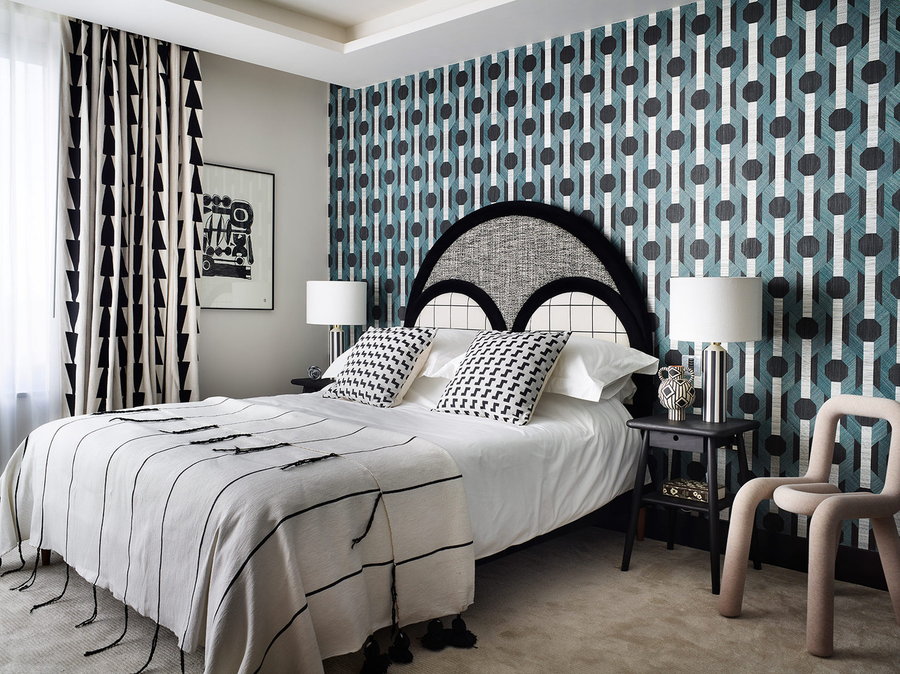 “The principal bedroom was a really difficult shape as well,” Gordon adds. A bed takes up most of the room’s footprint, so the designers framed a custom headboard directly against the wall. “Its curve mirrors the shape of the room, as do the bedside tables.” Both are a rich, deep red, since “monochrome always brings a room together,” as she explains. 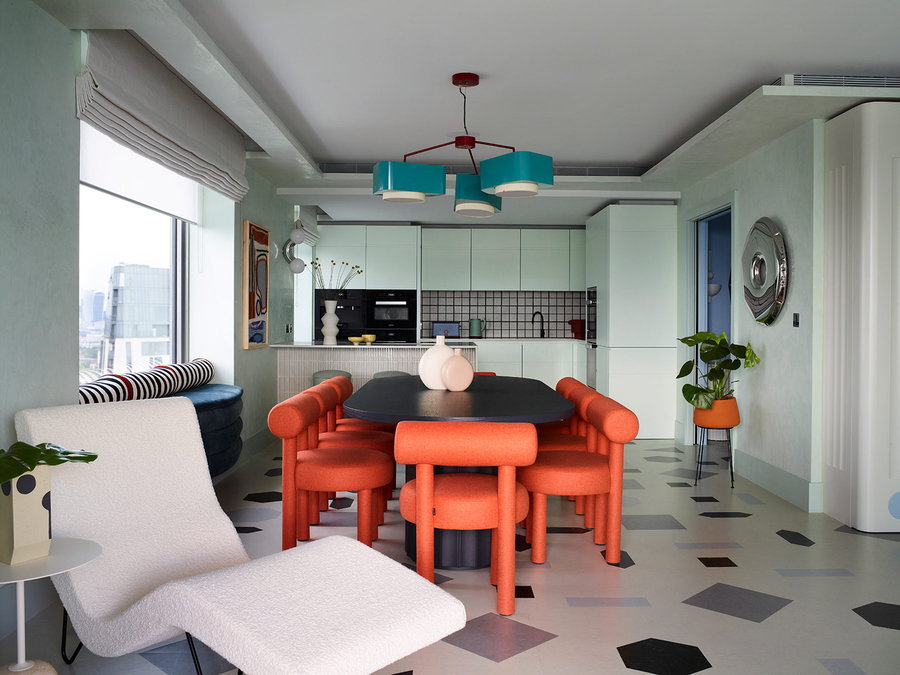 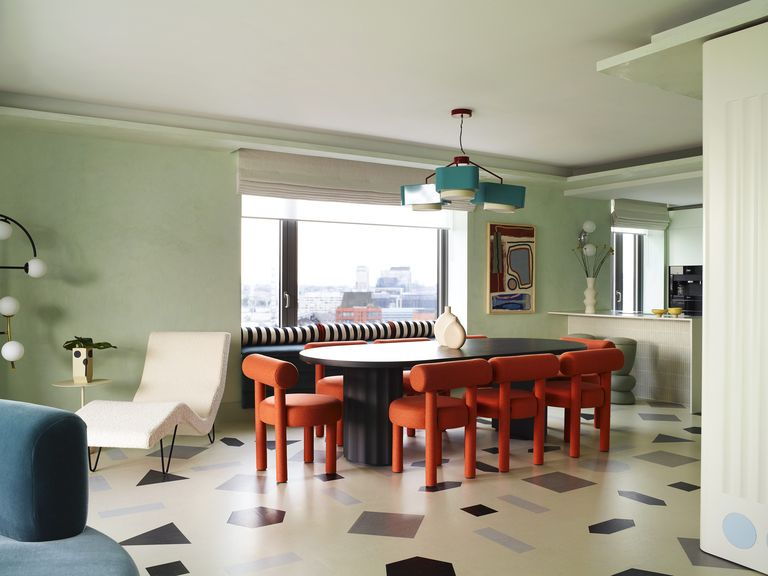 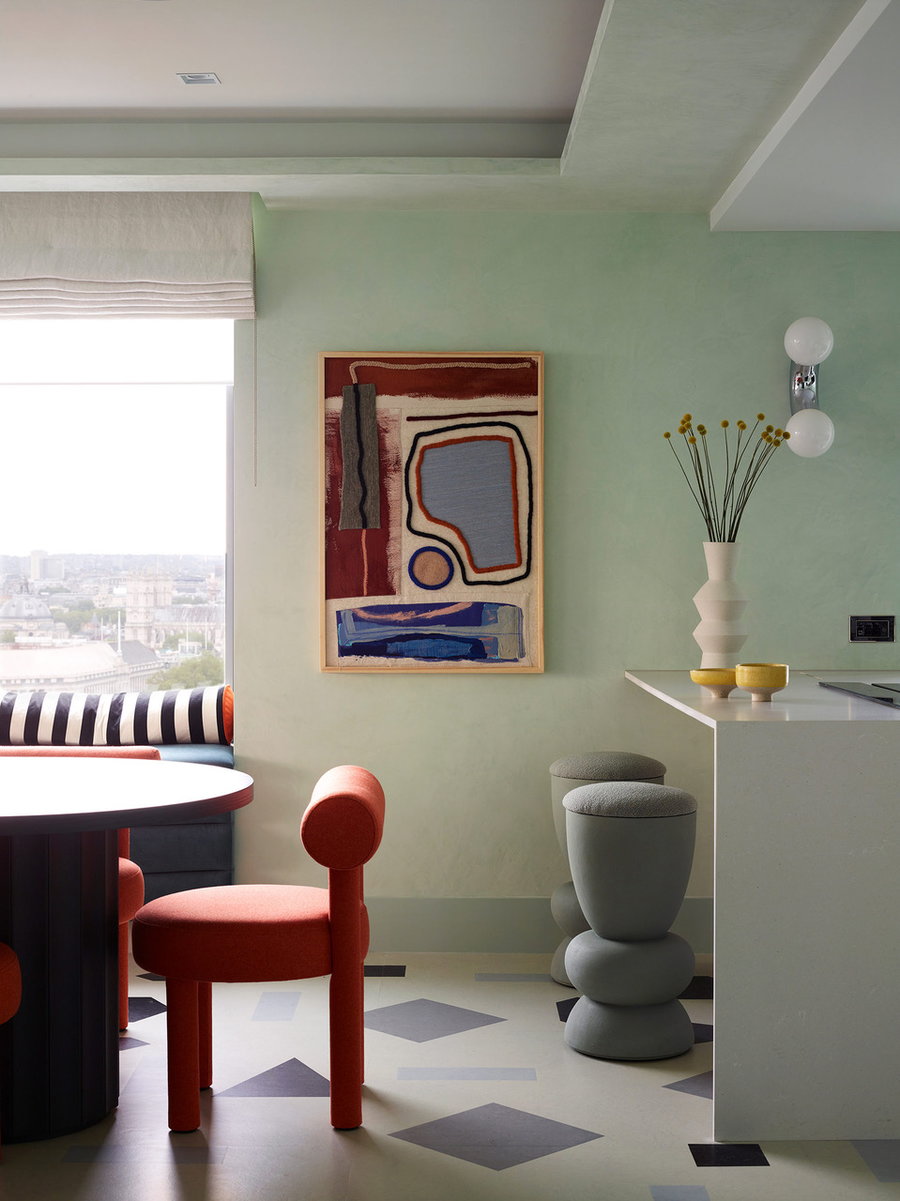 The oversized green velvet sofa is custom (naturally), as is the dining table, which is ringed by Noom’s Gropius chairs in a mouthwatering shade of orange. The inside of the bar cabinet echoes that color in a slightly softer hue. Fun shapes like Sella Concept’s Ladies Pond stools in the blue-gray shade of “Jesmonite” carry the abstract sculptural feel through each room. 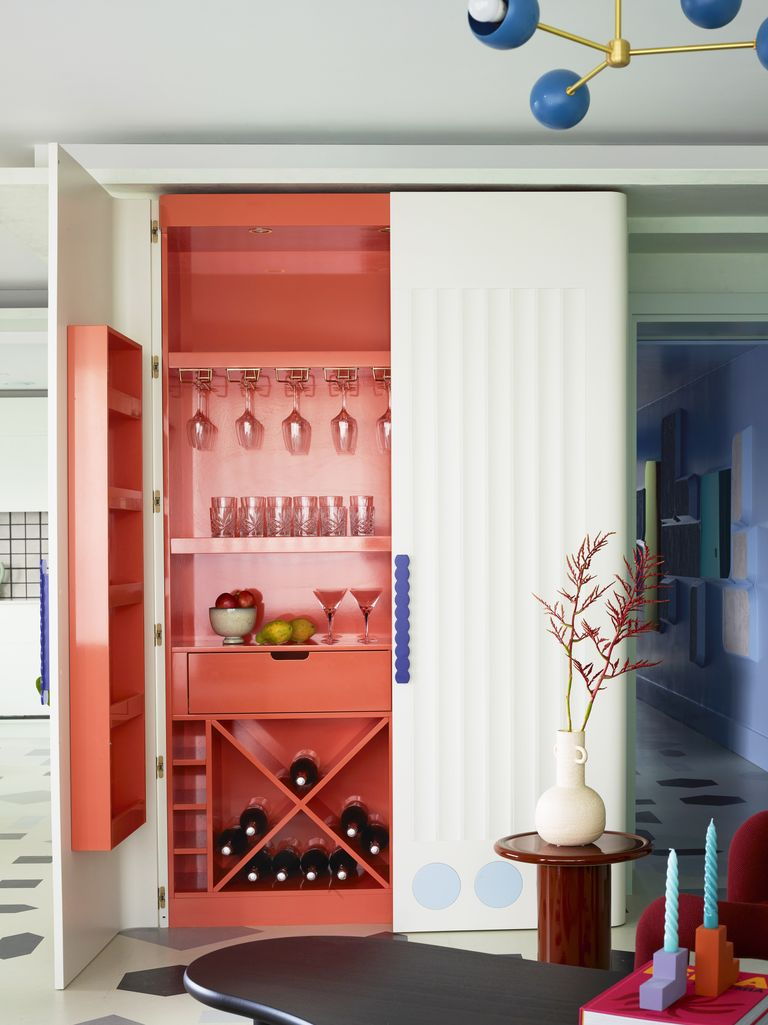 Ultimately, the apartment does feel like a space that would make David Bowie proud. Check out the singer’s own slightly more subdued personal taste with a glimpse of the New York City apartment where he lived before his death in 2016, which sold for $16.8 million.