Seen from above, this home looks like the ruins of an old bridge, or perhaps part of a forgotten fortress. Trees emerge from the spaces between the oddly shaped volumes, while the muted reds and browns of the bricks mimic the colors of the adjacent sandstone cliffs. But “House of the Big Arch” isn’t ancient by any means. It’s a new residence that melds into its environment with a sense of mystery and drama. 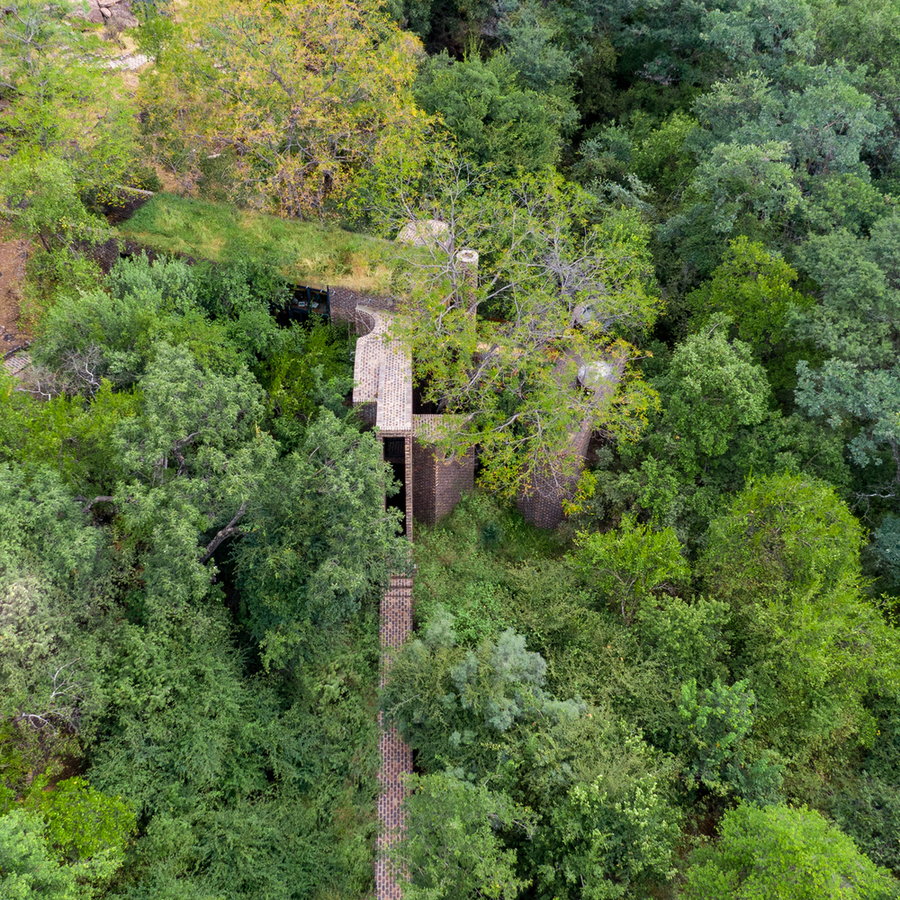 Architecture firm Frankie Pappas envisioned the home as a way to marry the cliffs and the forest of the picturesque site, located in a nature reserve in the Waterberg Mountains of South Africa. In this way, it’s both literally and metaphorically a bridge, and it’s designed to offer shelter not just to its human inhabitants, but also to the local plants and animals. 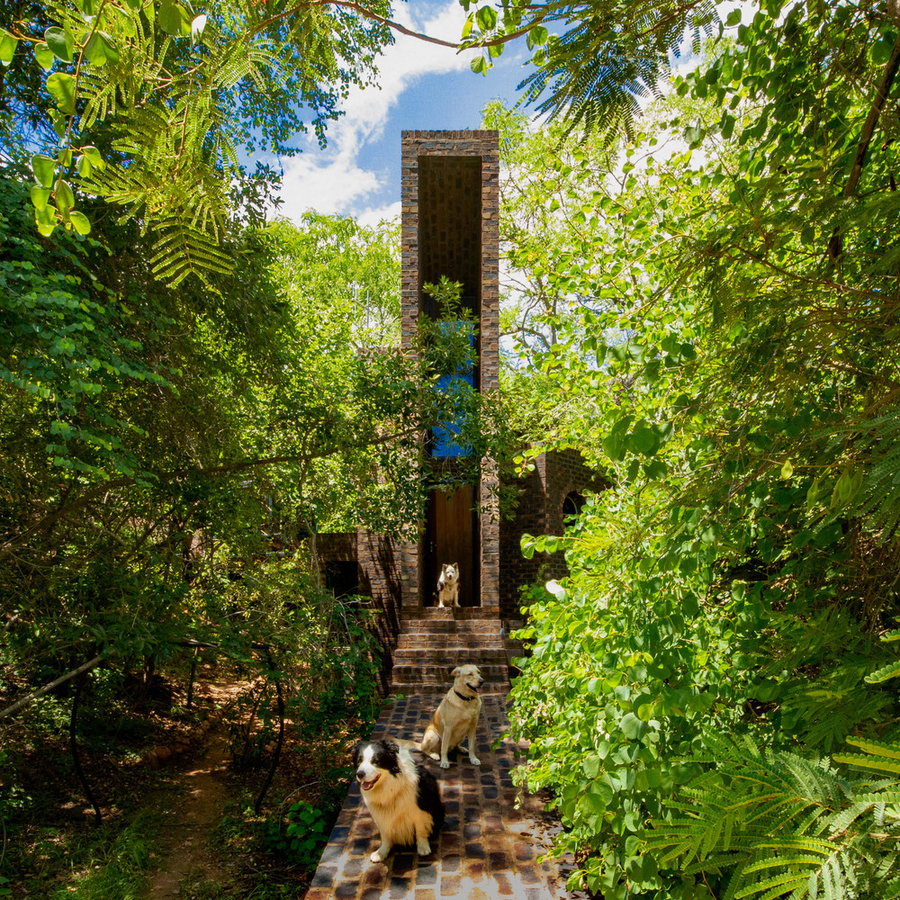 The architects wanted to slot the home carefully into the building site with minimal disturbance. Most architectural projects with this goal choose to go with lightweight materials and post-style foundations, resulting in both a contemporary appearance and a sense that the building isn’t permanent. Brick, in contrast, has a weightiness and solidity that creates the opposite effect. It feels strongly rooted to the site, and almost impossible to extricate. 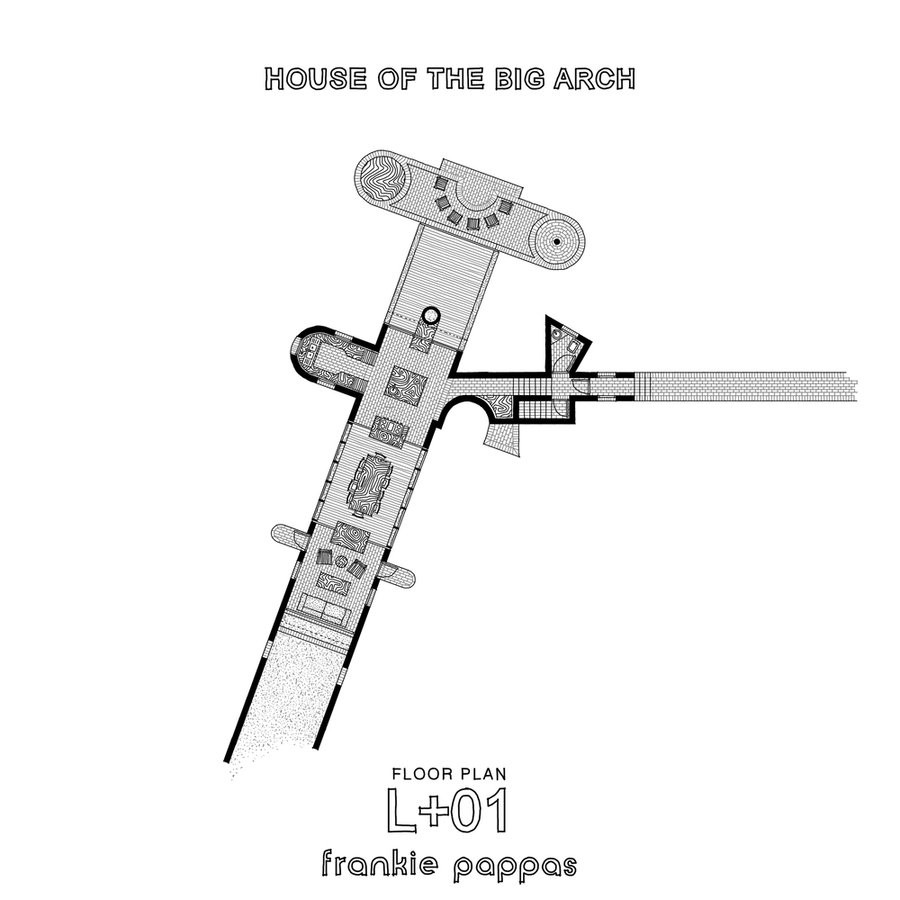 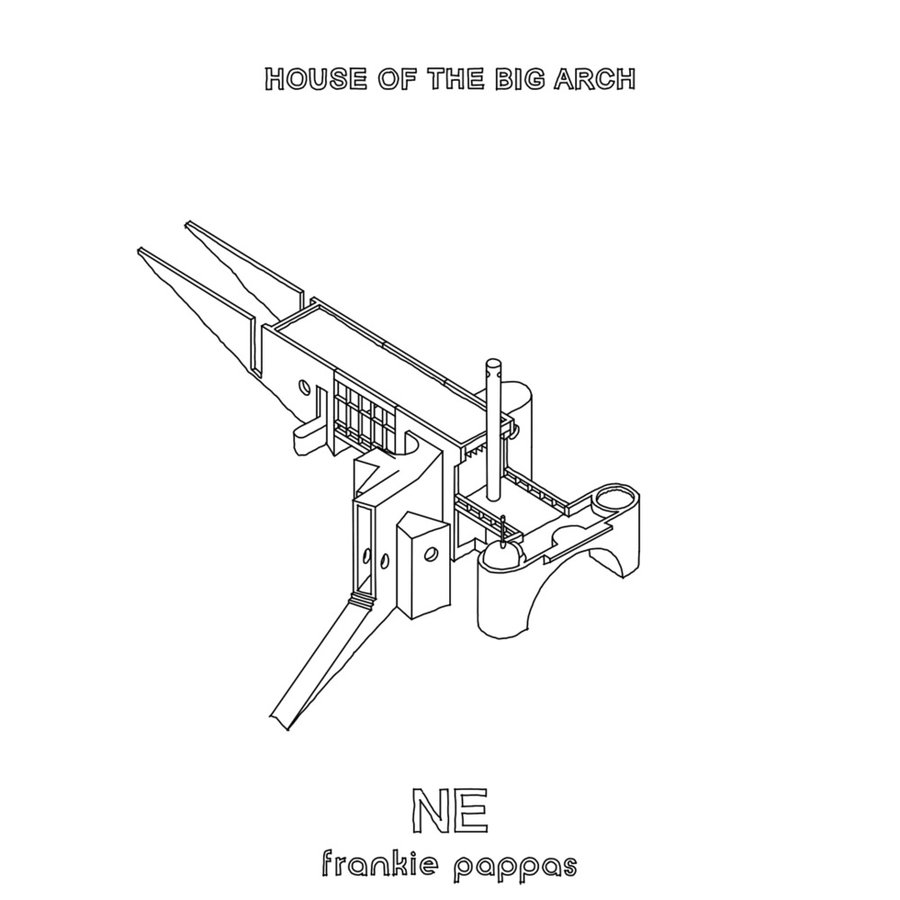 As you can see more clearly in architectural drawings, the unusual asymmetrical layout of the home, with its arm-like appendages, is completely informed by the landscape. Not a single tree was removed to accommodate it, resulting in what the architects call “funky bulges and protrusions in the plan of the building.” If the home stood alone in a field, with nothing to obscure it, its shape would look very odd, but here, it just enhances the sense that it contains secrets waiting to be uncovered. 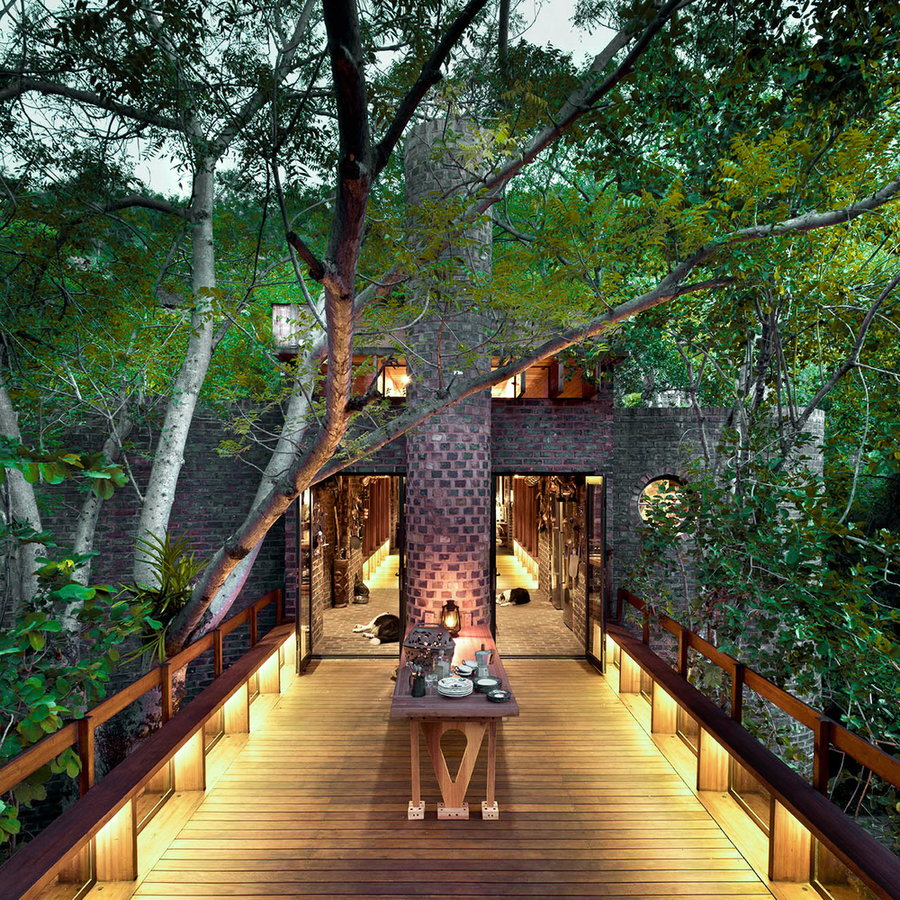 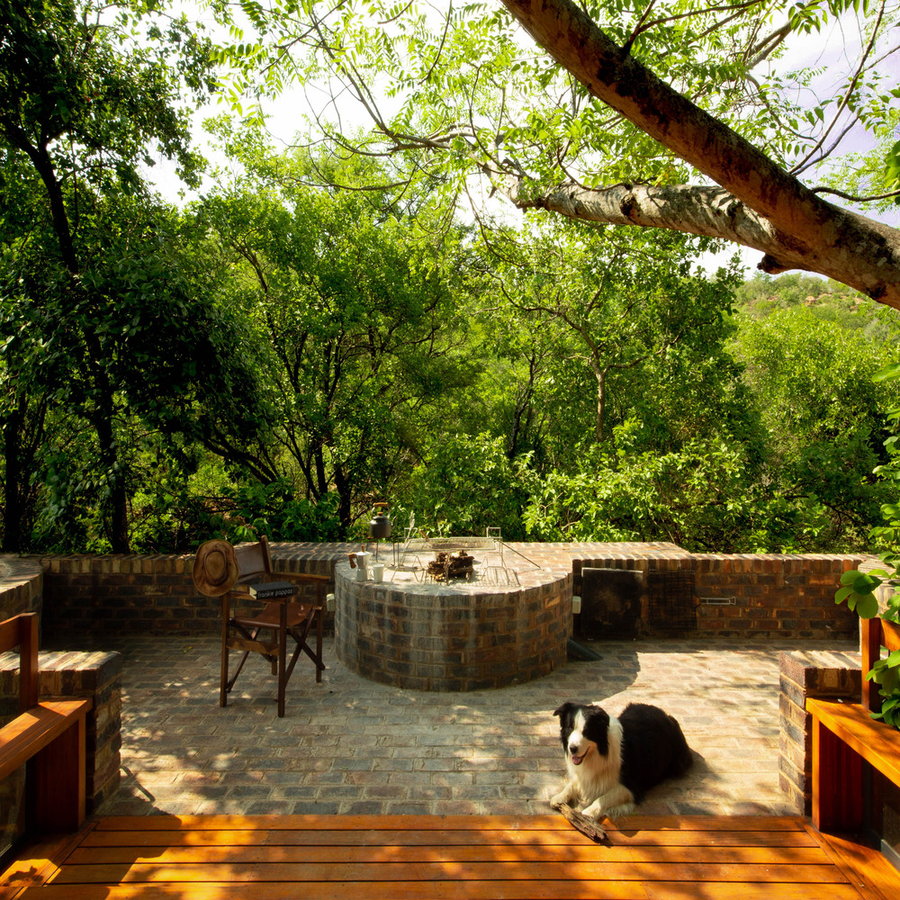 “The shapes of the additions to the central building are dictated by the position and size of the surrounding trees,” they say. “The building makes use of a very simple set of materials which all play their part in making the building part of its landscape. The most abundant material is a rough stock brick which was selected to match the site’s weathered sandstone. The ‘bridge’ portions of the building are constructed from sustainably-grown timbers, whilst glass and aluminum fill in the non-structural wall.”

“The first floor offers to its inhabitants a planted courtyard, a reclusive lounge, a sunlit dining room, a farmhouse kitchen and scullery, a tree-shaded deck, a small pool, and a fireplace — around which most of the cooking and living occurs. The ground floor provide yet more courtyards, a study, library, and a small swing bench under the arch. The cellar creates a climate conducive to curing meats, storing food supplies, and aging wines.” 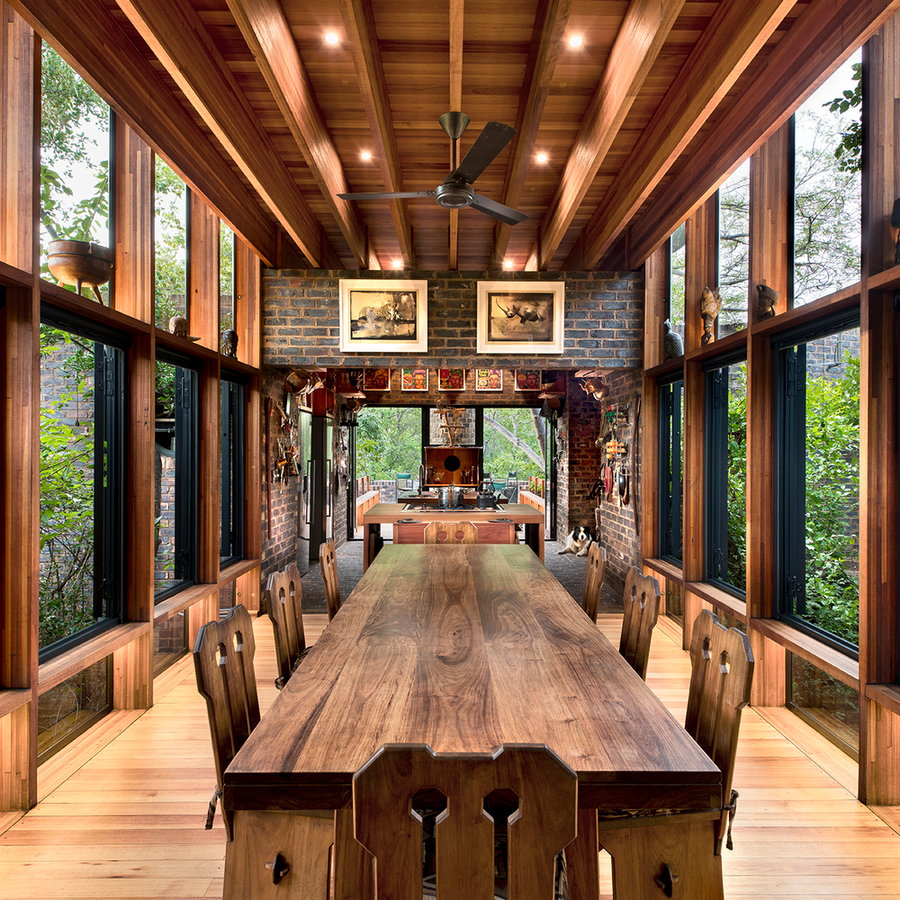 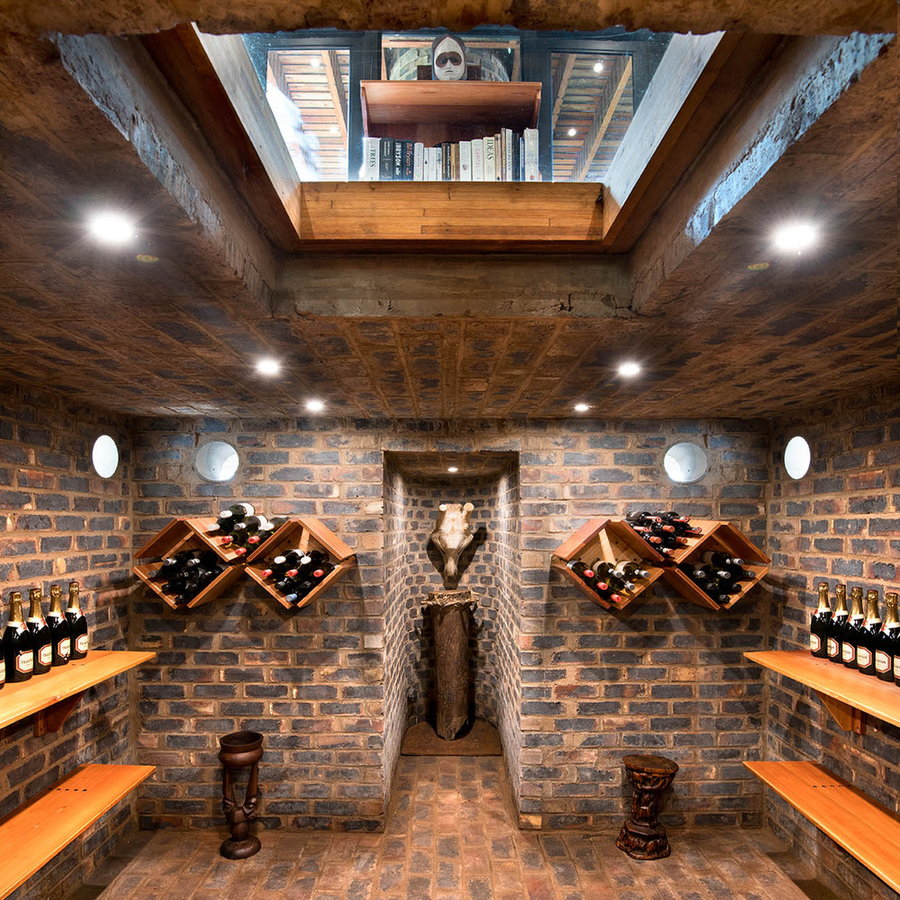 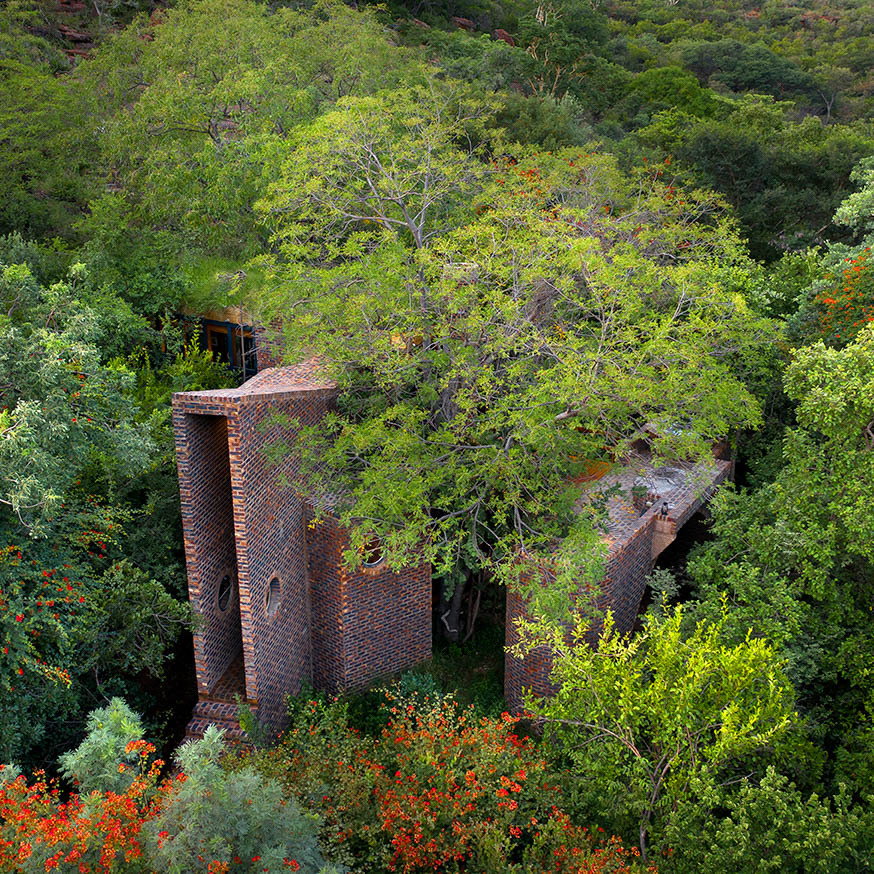 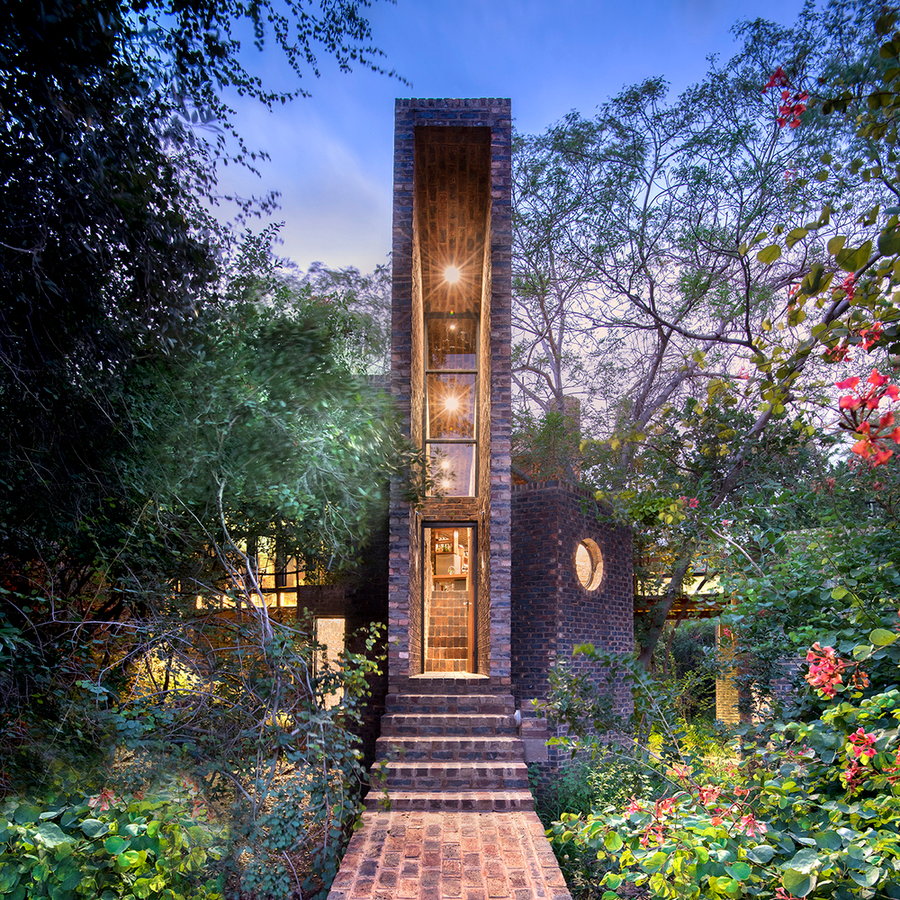 Refreshingly unique in a time when a lot of architecture looks alike, “House of the Big Arch” illustrates Frankie Pappas’ belief that architecture, landscape, and garden should function as one, incapable of being divided.

And if you’re wondering who Frankie Pappas is, exactly, that question has a similar answer, because there’s actually no one architect with that name. It’s a fictional persona and collective pseudonym chosen by architects who work in collaboration with coders, engineers, artists, and mathematicians to come up with “remarkable solutions to fascinating problems.”