Disclaimer: This post is about an intentionally playful dog park and must be read with imagination and humor.

Imagine that you are a dog living on the 20th floor of a condo tower in one of America’s densly-populated downtown areas. You become agitated if you’re inside for too long, and to get your human’s attention, you either have to bark at them or out the window. Maybe you sit facing the door with your head on the floor looking bored. Your human, a conscientious urbanite who loves you unconditionally, picks up on your cues, and takes you out for a walk. Still, you yearn for an expansive dog park where you can run with the other dogs. Unfortunately, most downtowns do not have enough space to create the type of park that would get your tail wagging with content. You’ll have to settle for a cramped, corporately-managed public space, filled with as much fun as a cardboard box. 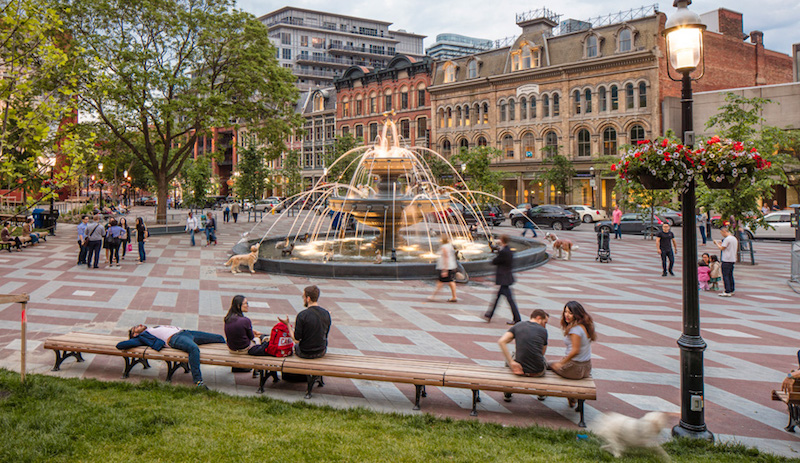 Don’t wallow in discouragement, dear pretend-canine reader. A small park in Toronto opened on June 28th for creatures just like you, and it’s called Berczy Park. The name alone makes it sounds like a playful place, and that was the intention of the Montreal-based landscape architect who designed it, Claude Cormier. The park, which takes up approximately 0.88 acres of land, is set on a triangular block adjacent to a key part of Toronto’s architectural heritage, the iconic Gooderham Building, also know as the “Flatiron Building.” Berczy proves that even a small, irregular parcel of land in a dense city can be used effectively, as long as all users, both two and four-legged, are considered. 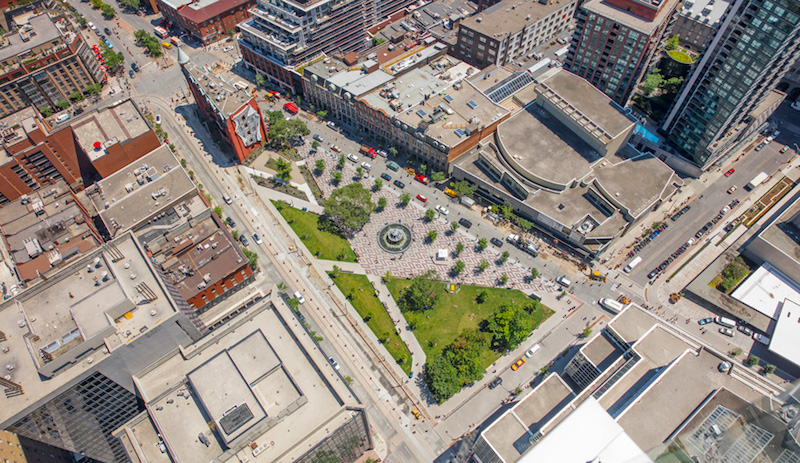 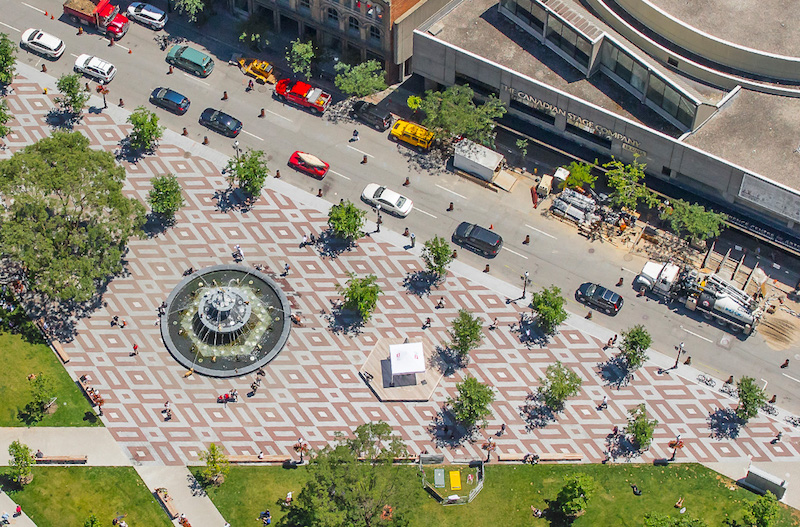 Tens of thousands of people have moved to downtown Toronto within the past decade, which means more dogs and more humans who feel uncomfortable having dogs around their kids. The coexistence of dog lovers and families can be a little acrimonious in a city like Toronto. Luckily, Berczy allows both groups to enjoy the space peaceably, and if the humans get along, that is always good for the dogs.

Prior to 1980, this space was a parking lot. Then it became an underutilized park, except for a couple of hours in the afternoon during the summers when office workers would use it. In short, the park was not serving the maximum amount of users that it could have been. Since its transformation into a dog park, it’s expected to host about 2000 dogs a day. It’s an ideal paradise for dog watching.

Though the park is not a folly, it purposely lacks seriousness. It’s centerpiece is a late-19th-century inspired cast iron fountain. Made at a foundry in Alabama, the fountain is 16 feet wide and weighs 26,000 pounds. Surrounding the fountain are 27 hand-crafted sculptures of dogs spewing water into it, each one transfixed by a large golden bone at its summit. You can splash and play with the other dogs in the water, and cool off on a hot summer day. 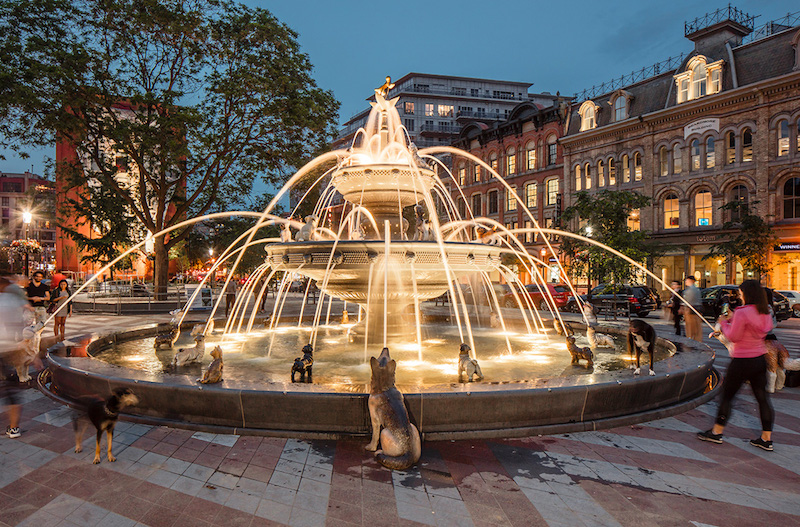 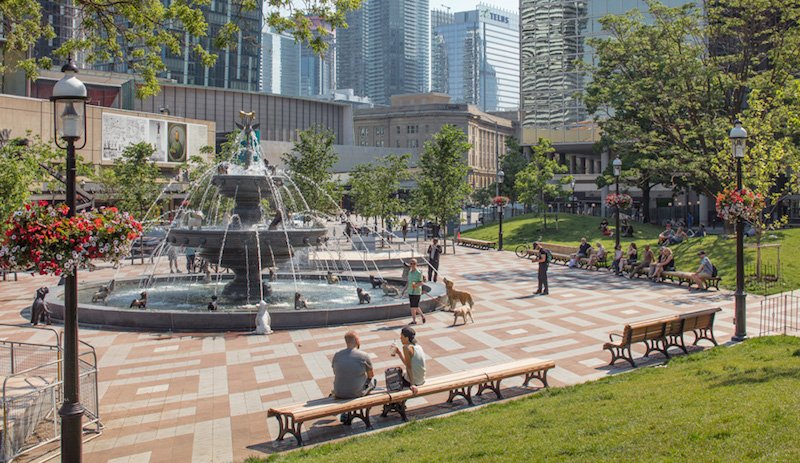 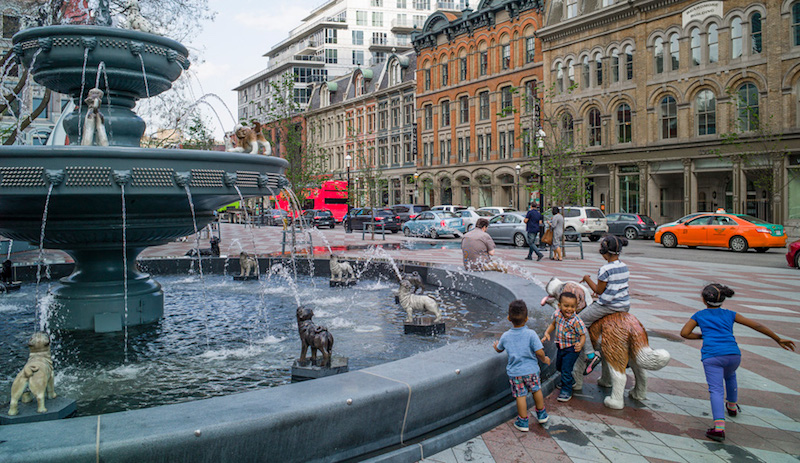 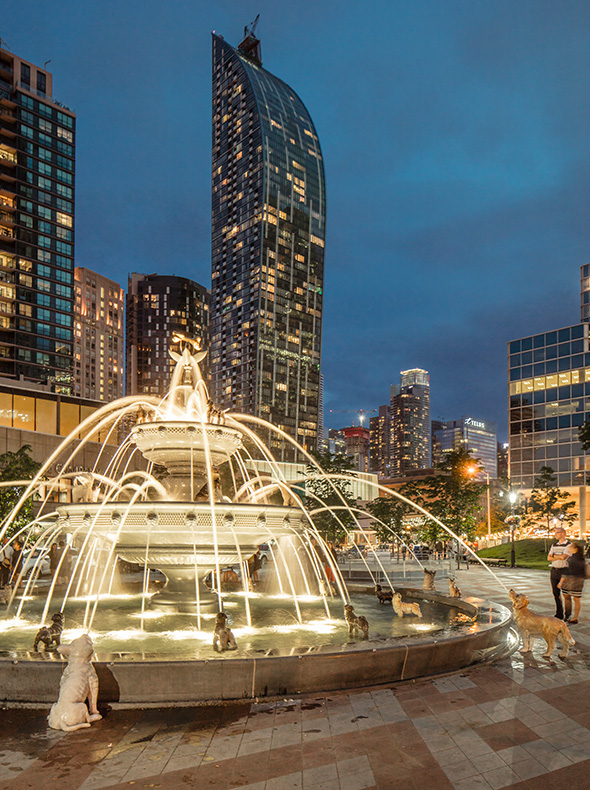 The dogs sculptures look real enough, but you can tell that they aren’t, which is part of the fun of the fountain — it’s almost like the way humans are thrilled by looking at wax figures of themselves in museums. Over a dozen breeds are represented here, including a Fox Terrier, a Giant Schnauzer, a Beagle, and a Golden Retriever (which was damaged by an exuberant skateboarder just before the park’s grand opening).

What a shame. Some humans just don’t understand or respect dogs and the things they like.

The fountain sits on a granite mosaic plaza, which includes luscious, grassy areas to roll around in and a gravel portion for restrooms. Berczy is not a generic public space with grass and a sign letting people know that dogs are welcome. It’s a memorable public space for both dogs and humans — one that’s timeless, amusing, and sure to keep your tail wagging for hours. 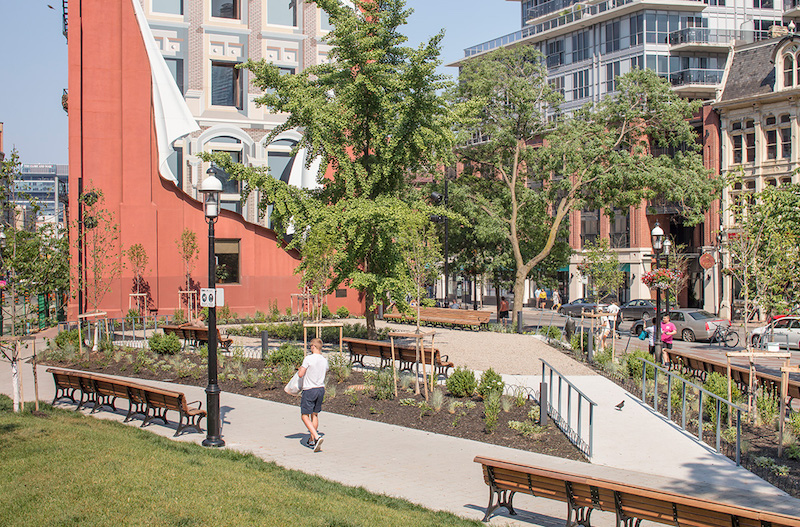 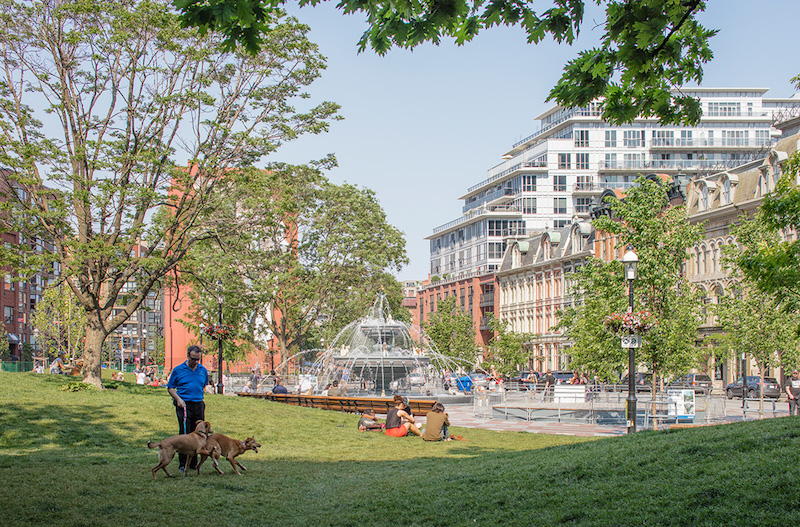 Berczy Park, which is named after German-born architect William Berczy, a historic figure of modern Toronto, gives that portion of downtown a focal point where none truly existed before. It’s a delightful park that should serve as an example for American cities to follow. All American dogs, especially those who live in high-rise condos in dense cities, should have a right to a quirky park of their own, no matter how quixotic it may seem. Tell your humans to take the fight all the way to city hall or the Supreme Court if they have to.

The cost to revitalize Berczy Park was $7.2 million Canadian (approximately $5.7 million US). But what do you care, you’re just a dog, right?

In reality, you’re not, and you might find Berczy Park to be mere kitsch and its spouting sculptures nothing but cheap postmodern gimmicks, but remember that Cormier didn’t just design it for humans. If you were a dog, you’d love it.