For many people who work in offices, a sad, droopy little houseplant is pretty much the only way to bring the color and cheer of nature indoors. You’re lucky if you have enough natural light coming in from nearby windows to let that plant thrive, much less an actual view of the outdoors. But what if you could spend your weekdays getting paid to hang out in an actual rainforest set within a glass dome? For hundreds of employees at Amazon’s headquarters in Seattle, that dream is now a reality. The retail giant has just opened “The Spheres,” a new Buckminster Fuller-inspired addition to its $4 billion complex, and it’s full of insane workspaces that will have you combing the company’s job listings online. 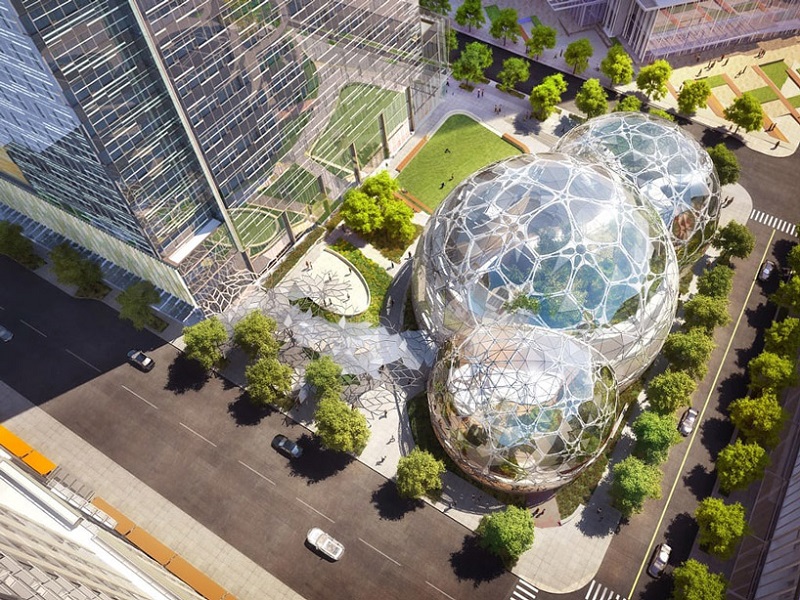 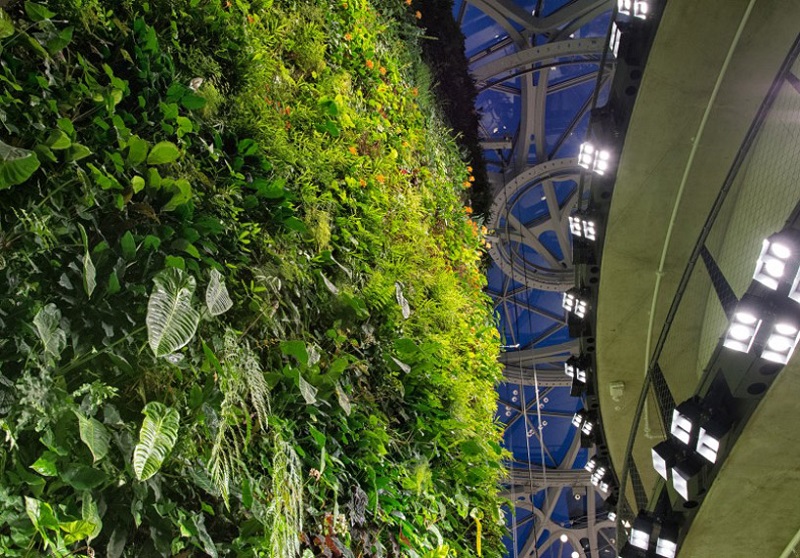 Set among Seattle’s sprawl of office towers, these NBBJ-designed globes look like conjoined greenhouses from the outside, and that’s actually not far from the truth. Inside, more than 40,000 plants representing 400 species cover virtually every surface. Stone paths meander among waterfalls, taking visitors on a tour of the gardens. The domes boast two living walls, palm trees, tropical shrubs with enormous leaves, an 18-ton ficus named Rubi, and a 40-foot-tall fern.

The gardens are divided into two sections: the “New World,” which mostly houses plants from South and Central America, and the “Old World,” which features vegetation imported from Africa and Southeast Asia. A massive glass tank placed along the latter holds exotic living creatures and aquatic plants from the real Amazon rainforest. Horticulturists carefully curated the selection of plants to ensure that they could survive alongside the humans who would be working inside the domes every day. The spheres are kept at 72 degrees and 60 percent humidity during the day and 55 degrees and 85 percent humidity at night to mimic the rainforest’s natural conditions. A ventilation system provides the occasional breeze, gently swaying the branches of the trees. 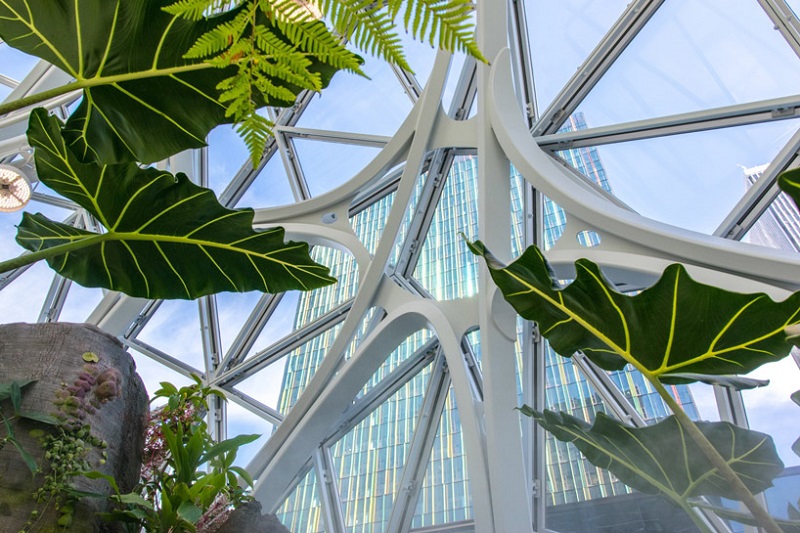 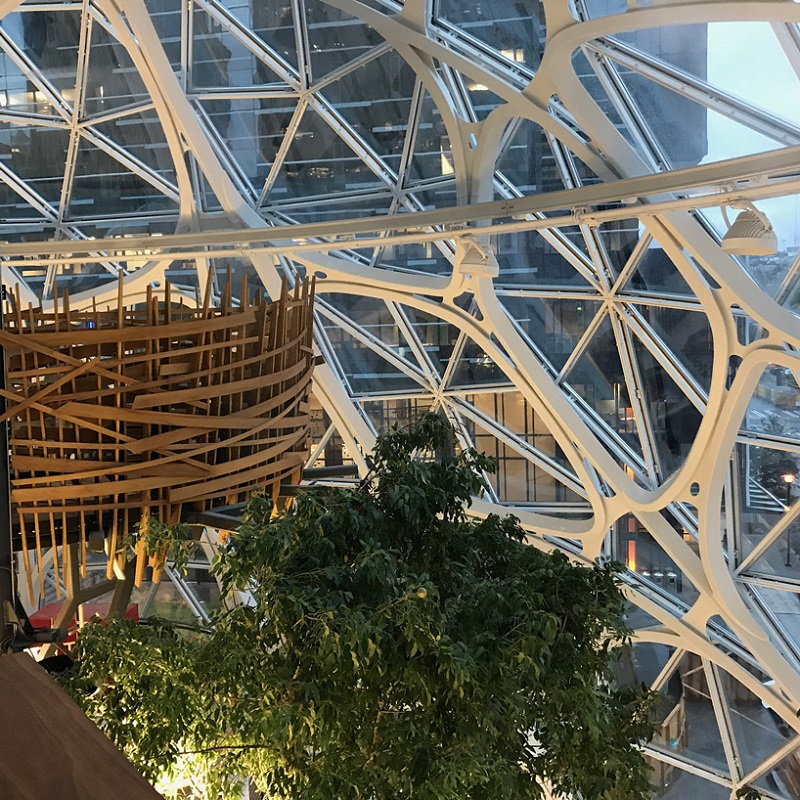 Speaking of the spheres’ human occupants, check this out: among these five levels of botanical workspaces lies a treehouse meeting room with a bouncy bridge and a deck full of recliners like the ones you’d expect to find poolside at a resort. All of the workspaces are open and provide views of all the vegetation. That’s definitely a perk in a city that tends to be rainy and dreary for the bulk of the year.

As for the domes themselves, NBBJ lead architect John Savo says his firm took inspiration from the power of the sphere as it’s found in nature (i.e. the sun, the moon, and the human eye). While the repeating element in the average geodesic dome is usually easy to pick out, the one in The Spheres is slightly harder to distinguish. It’s shaped sort of like a stick figure with an elongated neck, holding out its arms and legs like Leonardo da Vinci’s “Vitruvian Man.” All in all, sixty of these modules come together to form a pentagonal hexecontahedron. The largest of the spheres is over 90 feet high and 130 feet in diameter. 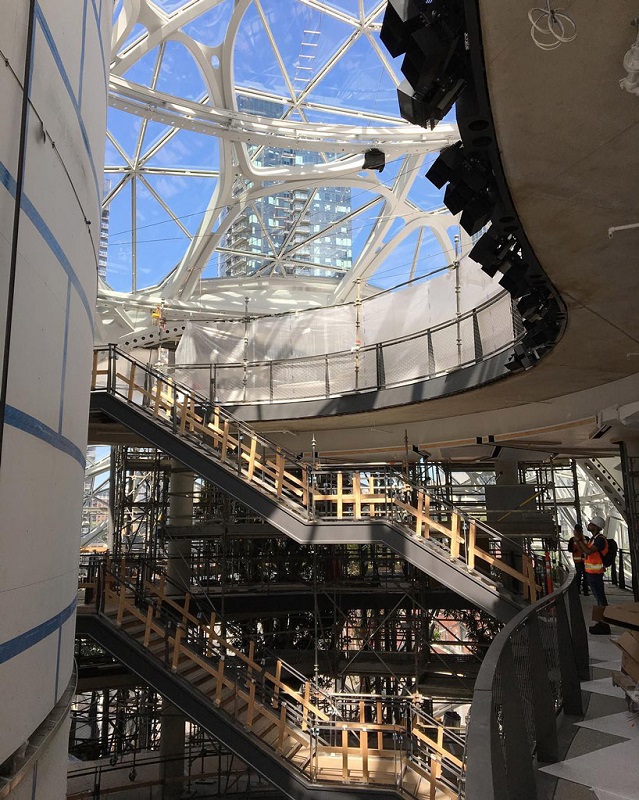 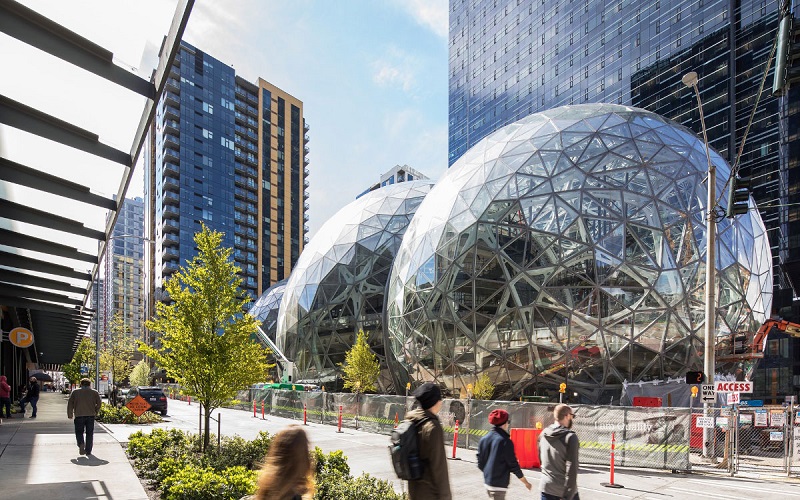 “Our goal with the spheres was to create a unique gathering place where employees could collaborate and innovate together, and where the Seattle community could gather to experience biodiversity in the center of the city,” says John Schoettler, Amazon Vice President of Global Real Estate and Facilities. “I am very proud and thankful to the entire team who made the spheres a reality — they did a terrific job from the design all the way to the finishing touches. We are thrilled to officially open the doors.”