For fans of J.K. Rowling’s wizarding world, the next best thing to actually soaring around on a Nimbus 2000 may be just around the corner. More specifically, designer Alessandro Russo Silveira has launched a Kickstarter campaign to produce “the real flying broom.” 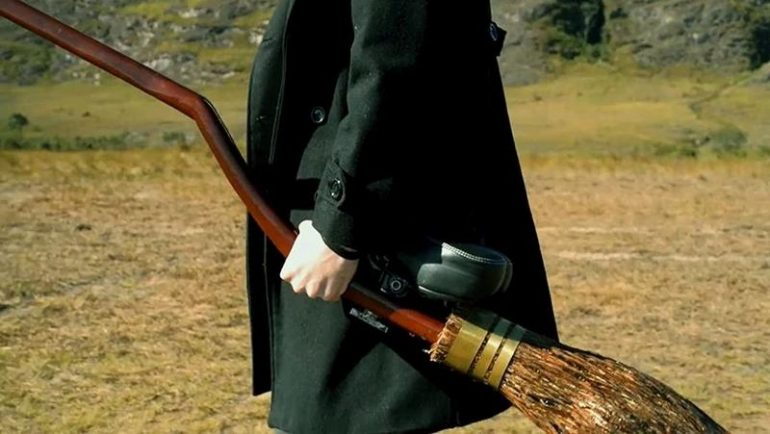 That title may be a bit of a misnomer, though. While still a great ride, no actual flight is involved here. Rather, the campaign features a broom-topped device that can be attached to an electric unicycle. The witch or wizard can then straddle the broom and “take off” by leaning forward to accelerate and “land” by leaning backward to brake. Similarly, inclining to either side will produce a turn. Still, with many unicycles today reaching up to 20 miles per hour, the “real flying broom” can be said to provide a near-airborne experience. 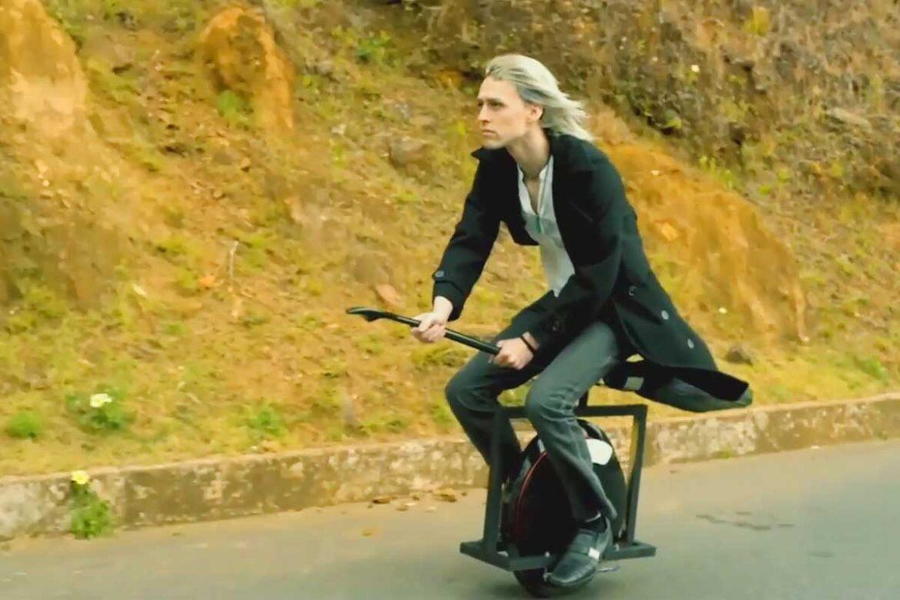 The carbon steel frame — measuring 20 inches long by 17 inches tall — can be connected or detached to a not-included electric unicycle (the one in the Kickstarter videos is an Inmotion V8) using metals rods and screws. Topped with a bicycle seat, a broom in one of four choices — the Numen 1.0, 2.0, 2.1, or 2.2 — is then mounted to the device. The sweeper and seat can also be removed from the frame for easier transport.

In fact, the very Hogwarts-like Nuvem brooms — available in silver, black, light, or dark wood − can be purchased individually for mixing and matching or for those more imaginative Quidditch cosplay matches. 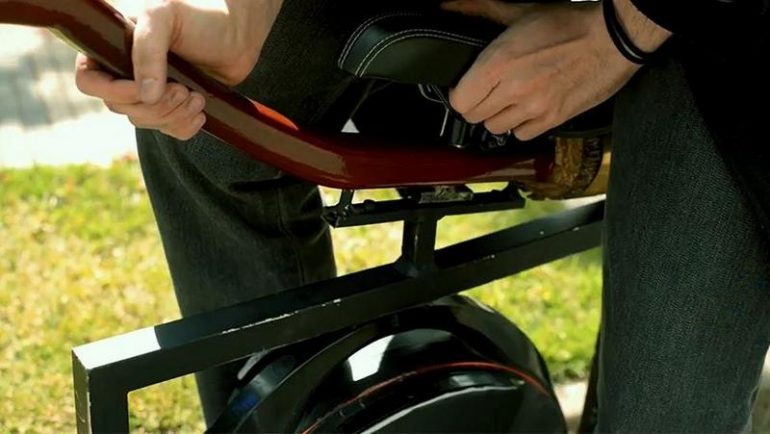 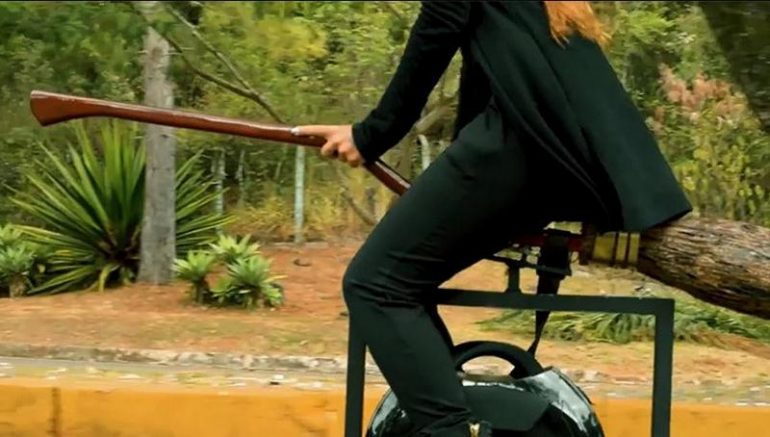 Brazilian designer Silveira, himself a graduate in digital game design, says he was inspired “by universes that make our lives more magical” to create something that “could create the feeling of flying on a magic broom.” In his Kickstarter bio, he describes himself as an “inventor, marital artist, singer, and content creator.” He also proudly declares himself to be “enthusiastic of the magic and nerd culture.”

The whole campaign keeps the tone light-hearted like this, never taking itself too seriously. Among the FAQs on the Kickstarter page is the query: “Will it be an experience like in the first Harry Potter movie?,” to which the creator honestly responded, “Well… we guess you can say that, but more like Neville than Harry.” 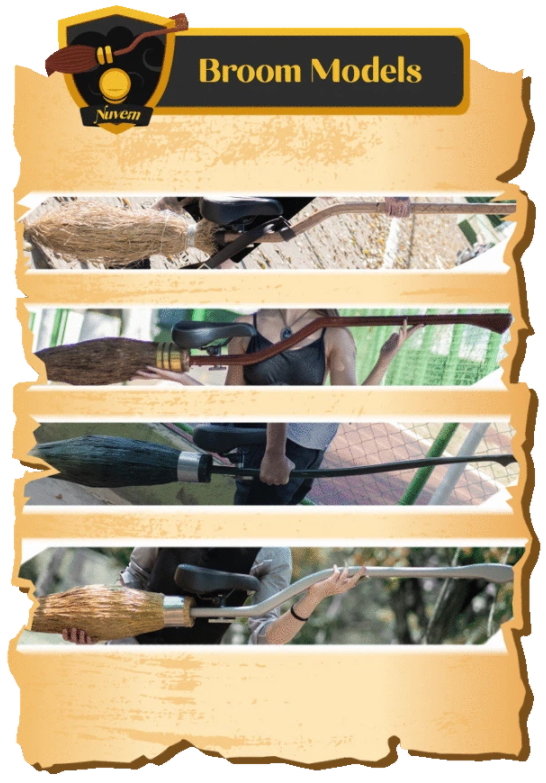 Should the campaign get off the ground, the real flying broom contraption is predicted to have delivery dates in March 2021. The support frame and broom combo will range in price from $55 to $68, while single brooms will cost between $38 and $45. All products will be manufactured and shipped from Brazil.

Each Kickstarter contributor will also receive a Nuvem t-shirt, two pins with the company logo, a broom-carrying belt, and a signed certificate from the CEO. If the goal is exceeded, the designer hopes to offer upgrades like more-comfortable curved edges on the metal frames and an extendable height to fit more unicycle models. 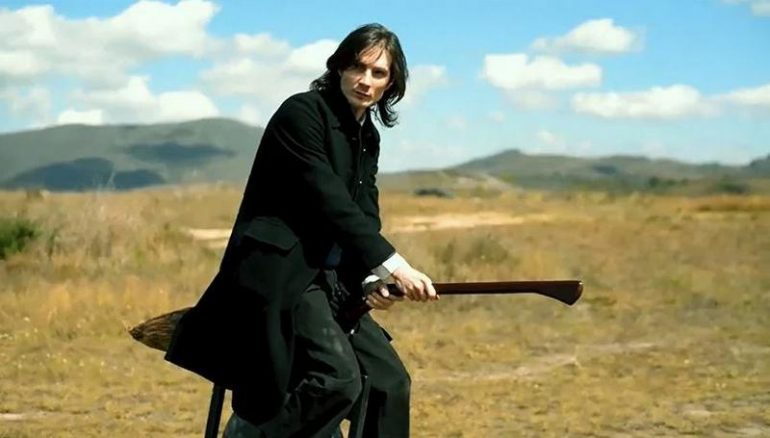 At time of writing this article, there were seven days left of the campaign with only $807 having been pledged toward the $11,260 goal. With so few backers, the actual product may not be arriving any time soon, but who knows? The dream of wizard flight might just live on and inspire a new wave of magical inventors.