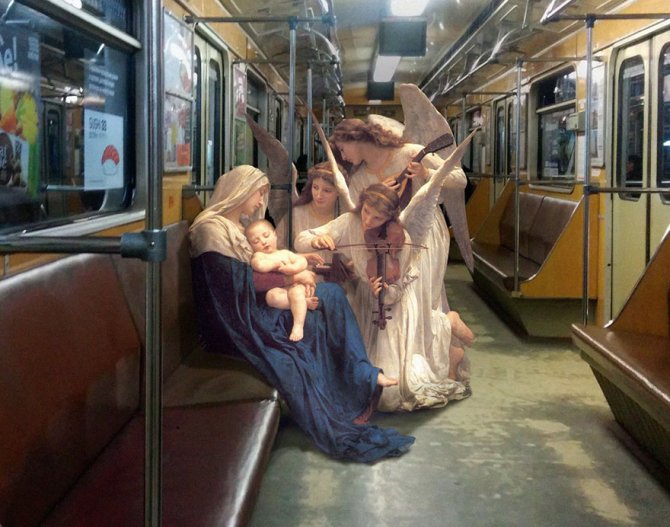 Kiev-based art director and visionary Alexey Kondakov dares to dream of a world ‘peopled’ by sacred and mythical beings. Entitled “The Daily Life of the Gods,” it is made up of ordinary urban situations—traveling on the subway, sitting in cafes, hanging about in the street—super-infused with a touch of classical surrealism.

Using his skill as a digital image manipulator and artist, Kondakov created his “Reality 2” project, super-imposing classical artworks onto photographs of everyday life in the Ukraine.

By placing “Song of the Angels” by William-Adolphe Bouguereau on a subway train, (pictured above) he gives a striking and poignant image that subverts our traditional view of the madonna and child. A woman is surrounded by angels, who are seemingly administering to a single mother, vulnerable and alone on public transport. 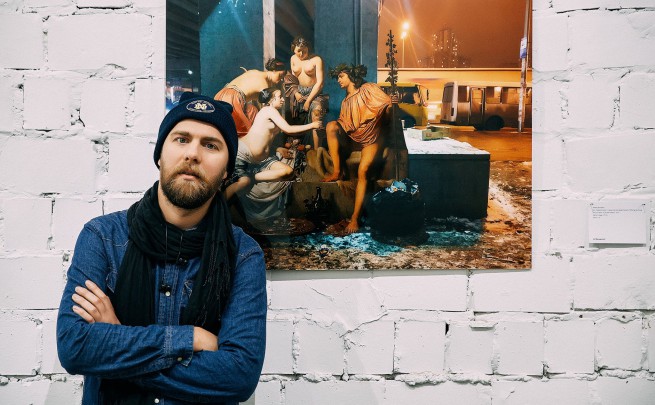 Kondakov became ShowDesk Naples‘ Artist in Residence for 2016. The ShowDesk mission statement reads “Not Profit, Just Culture,” and the project was set up in 2009 by the Undergrowth collective to facilitate opportunities for “young emerging artists to meet and publicly present their work.” The artist was given this write up on the website:

“Kondakov investigates the dynamics of landscape, including the manipulation of its effects and the limits of spectacle based on our assumptions of what landscape means to us. Rather than presenting a factual reality, an illusion is fabricated to conjure the realms of our imagination…by referencing romanticism, he focuses on the idea of ‘public space’ and more specifically on spaces where anyone can do anything at any given moment: the non-private space, the non-privately owned space, space that is economically uninteresting.” 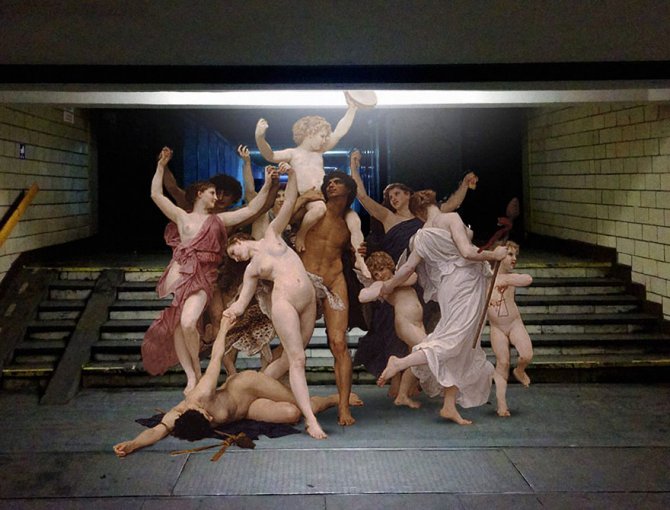 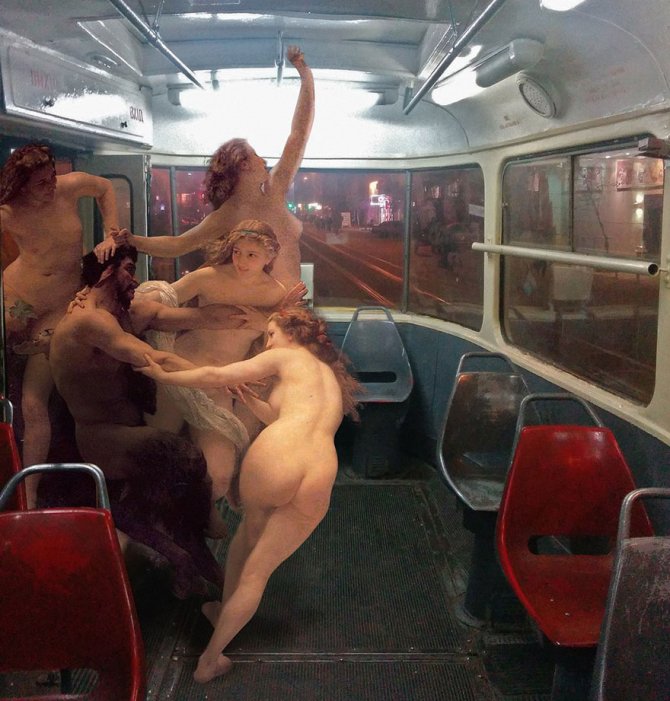 Are the gods having fun in their ‘daily life’ at the bottom of the subway steps or cavorting around on the top deck of a city bus? Is there just a touch of desperate hedonism that now taints the frolics and gambols of these sacred creatures? Is ordinary life just a touch too prosaic for such celestial (and joyfully naked) bodies, out on the town? 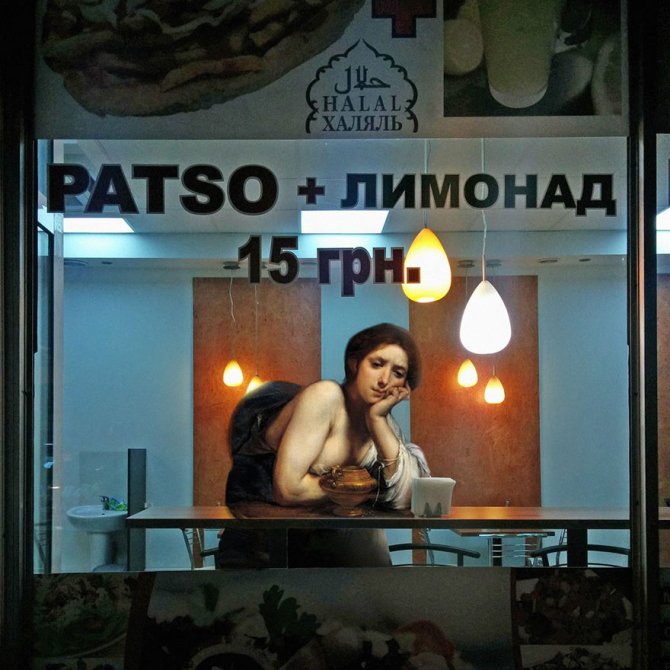 This heavenly muse is musing by a cafe window—she could be texting, awaiting a call back from a love, which may never come. She could simply be plotting her next sacred task. The profound and the spiritual are dropped right down to earth in classical images that seem to become tainted by the mundane realities of ordinary life. 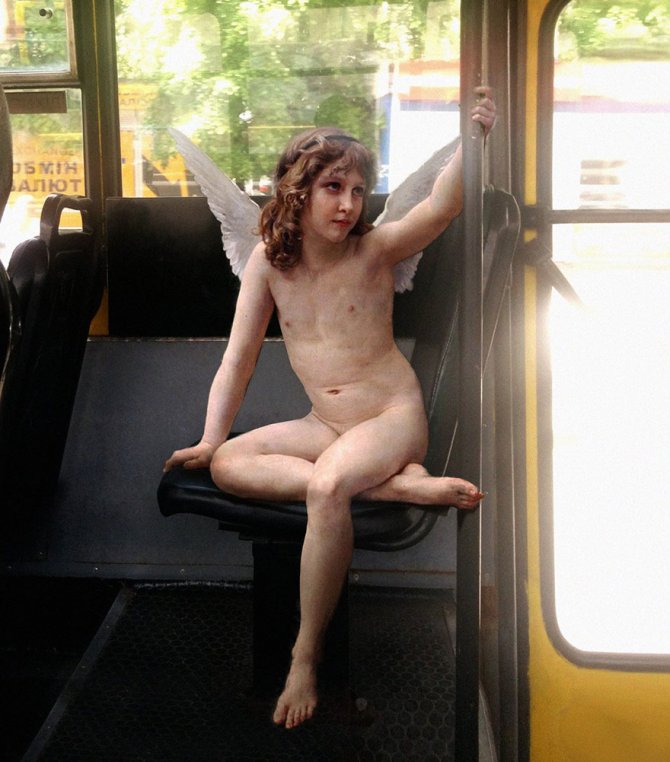 Everyday life can also be sweet and funny when we’re presented with a young and beautiful winged angel, nonchalantly hopping on a bus. How has he paid his fare? There is a distinct lack of pockets—though who could refuse such a charming creature and tell him to get off or pay up! Surely life—particularly as envisaged by Kondakov—is too short for such petty behavior? 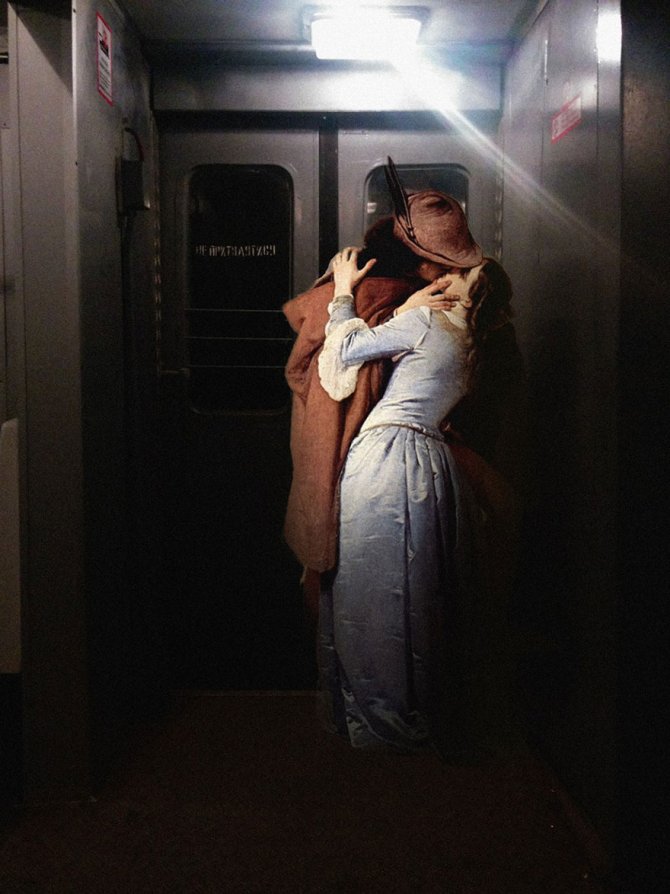 Apparently even the Gods themselves can’t resist a quick clinch between carriages on a speeding train. All that dynamic movement and urgent speed is just too compelling to resist a secret tryst—courtesy of the wit and creativity of artist Alexey Kondakov.