We’ve all done it. We’ve dropped glasses of wine on the floor and watched in horror as the dark red liquid splashed up all over the kitchen cabinets. We’ve accidentally let tomato sauce simmer too long and come back to find that it somehow managed to splatter surfaces from six feet away. We’ve dripped hard-to-clean sauces, misted the backsplash with pan greasing spray and stained the counter with an errant serving spoon. So, needless to say, most of us value durable, easy-to-clean kitchen surfaces over anything too precious.

But it’s hard not to be a bit awed by a modern kitchen design that incorporates so many luxurious materials; it’s a showpiece in its own right. Custom kitchen manufacturer TM Italia presents a freestanding kitchen system that looks like a set of beautiful armoires and dressers, which they named after famed fashion designer Miuccia Prada. 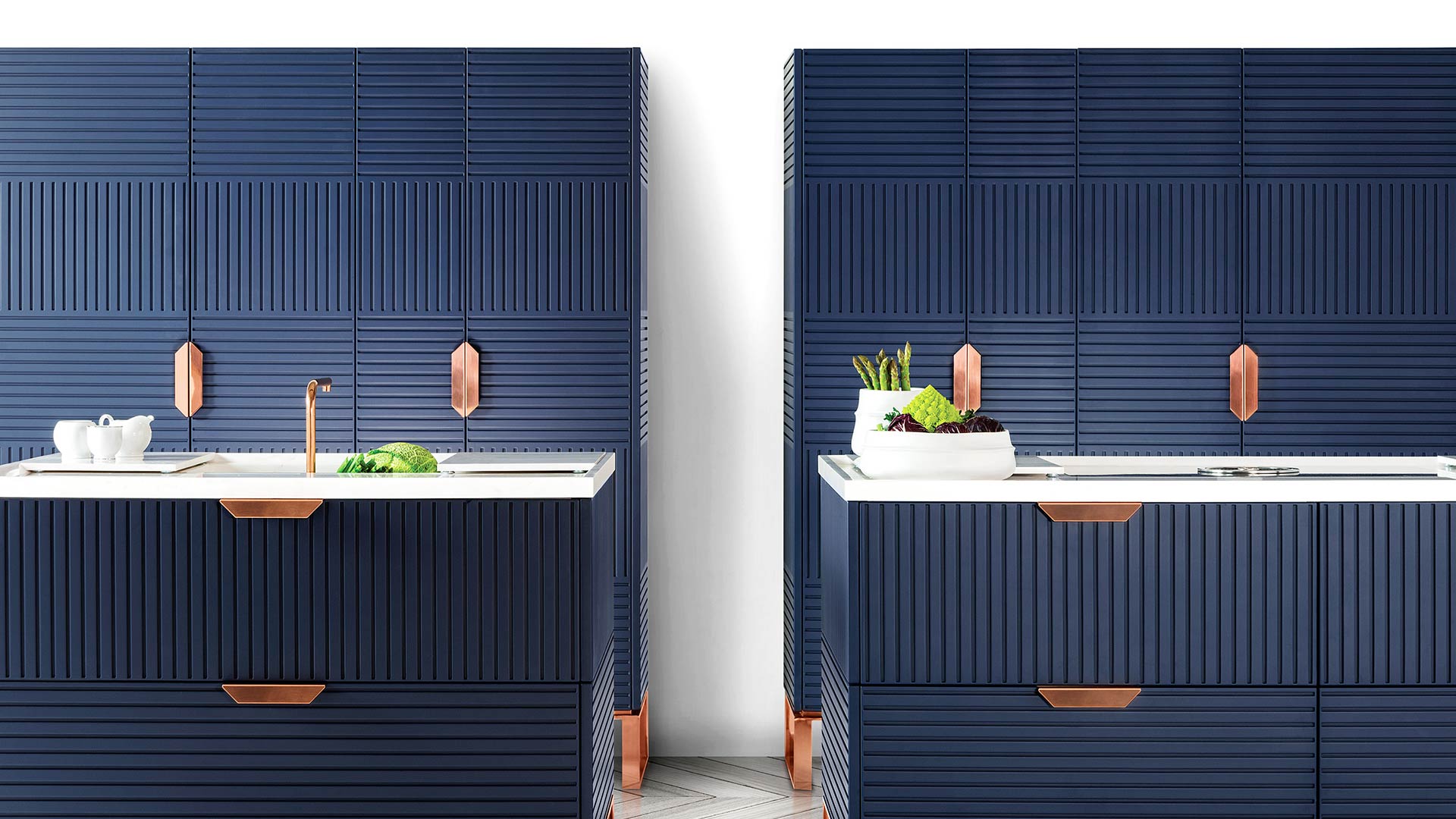 A compact, covert kitchen system designed to blend into a home interior instead of standing out, “Miuccia” is a vision in midnight blue, wearing its contrasting rose gold hardware like jewelry. The freestanding design takes inspiration from traditional hutches and cupboards, but modernizes them with simple silhouettes.

The system consists of two armoires and two islands, each raised off the ground on rose gold legs for a light appearance that radically departs from the heavy, sturdy, built-in construction of most modern kitchens. The armoires are full of storage for dishes, tableware, pots and pans, wine bottles and other kitchen implements, as well as hidden appliances, like a convection oven in the same shade of blue. The dishwasher, refrigerators and freezer are similarly concealed. 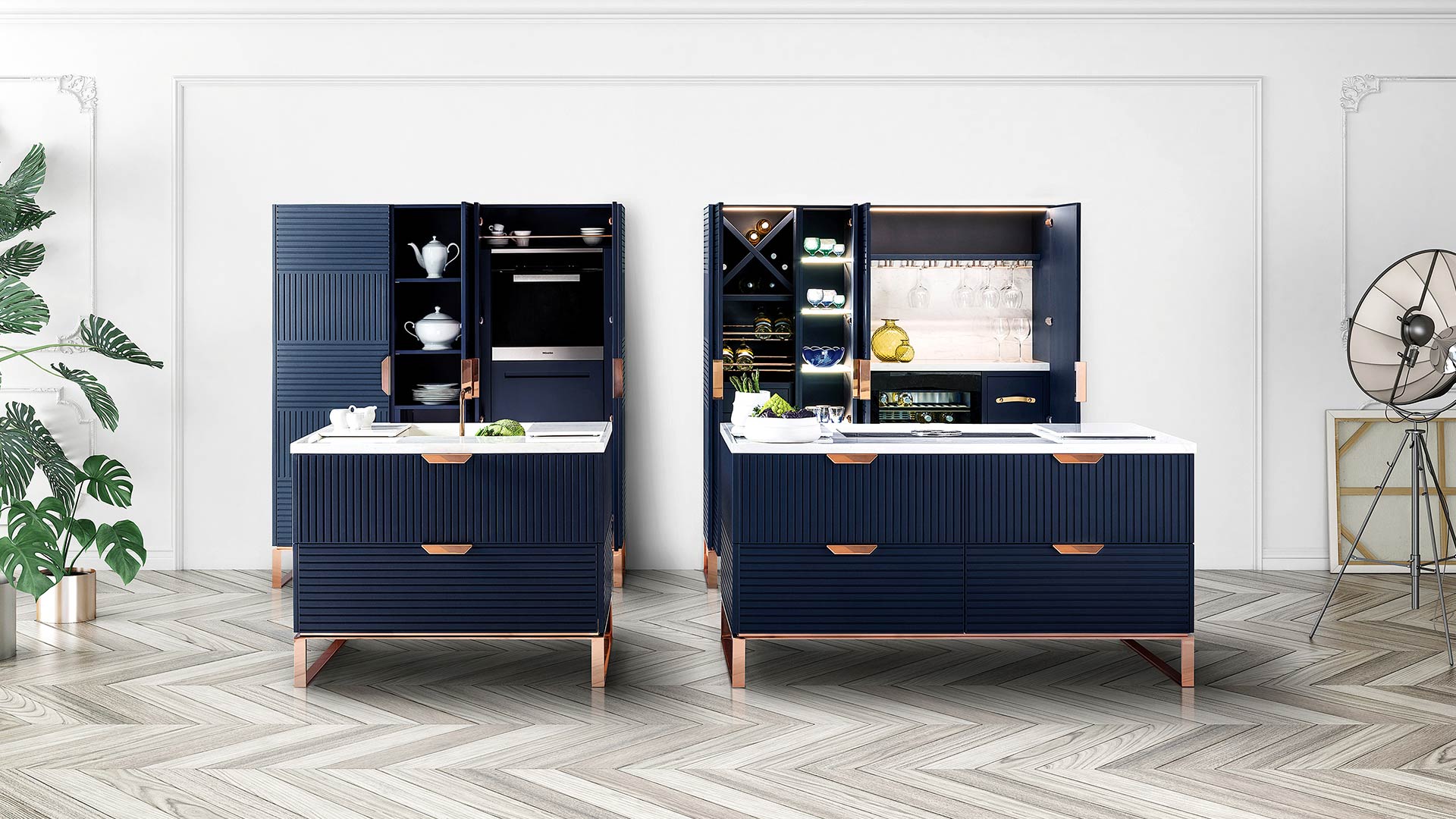 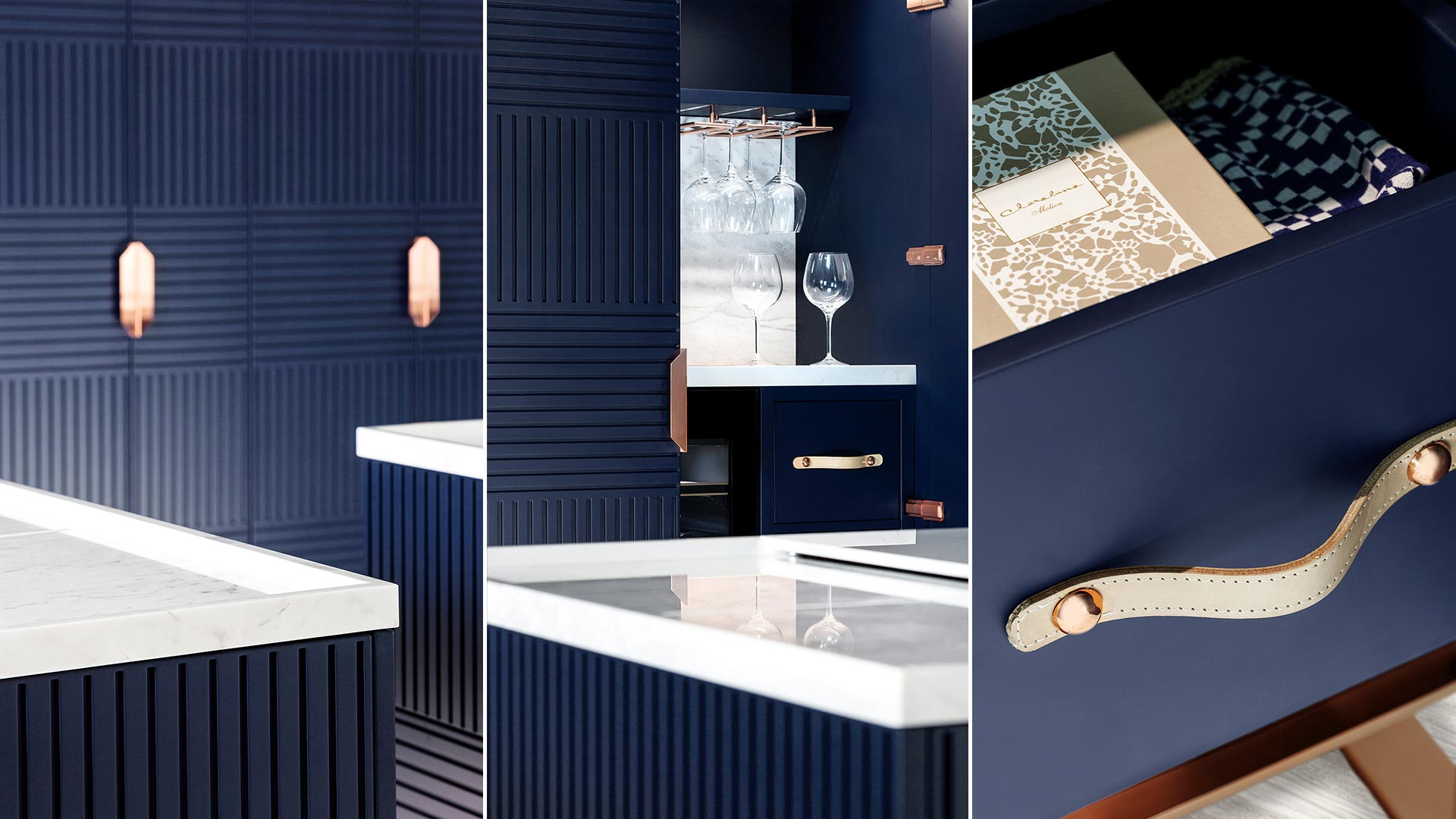 The islands are topped with Pirgon stone, featuring a sink and stove concealed under two sliding chopping boards on tapered guides, which disappear into the surface when closed. Internal LED lighting automatically switches on when the doors are opened, and the drawers are lined in blue fabric. A Miele wine cellar with a cooler keeps bottles chilled, and there’s even a trash compartment hidden within one of the islands to keep everything well-organized and looking beautiful.

Without a doubt, even taking affordability considerations aside, this kitchen isn’t meant for most of us, especially if we cook frequently or have children. It wouldn’t take much use to mess up those pristine surfaces. But the overall design is intriguing as an option for smaller spaces, especially when you might want your kitchen to blend in instead of standing out. Considering how much homeowners often invest into their kitchens during renovations, it’s also cool to imagine taking it with you when you move.

“The Miuccia kitchen is shrouded in the mystery of midnight blue, the preciousness of rose copper and the solidity of Pirgon stone — all skillfully combined in a neo-déco interpretation of contemporary space,” say the designers. “The simplicity of its pure forms is enriched by sophisticated surface incisions and punctuated by handles in rose copper, bestowing refined elegance on the whole composition.” 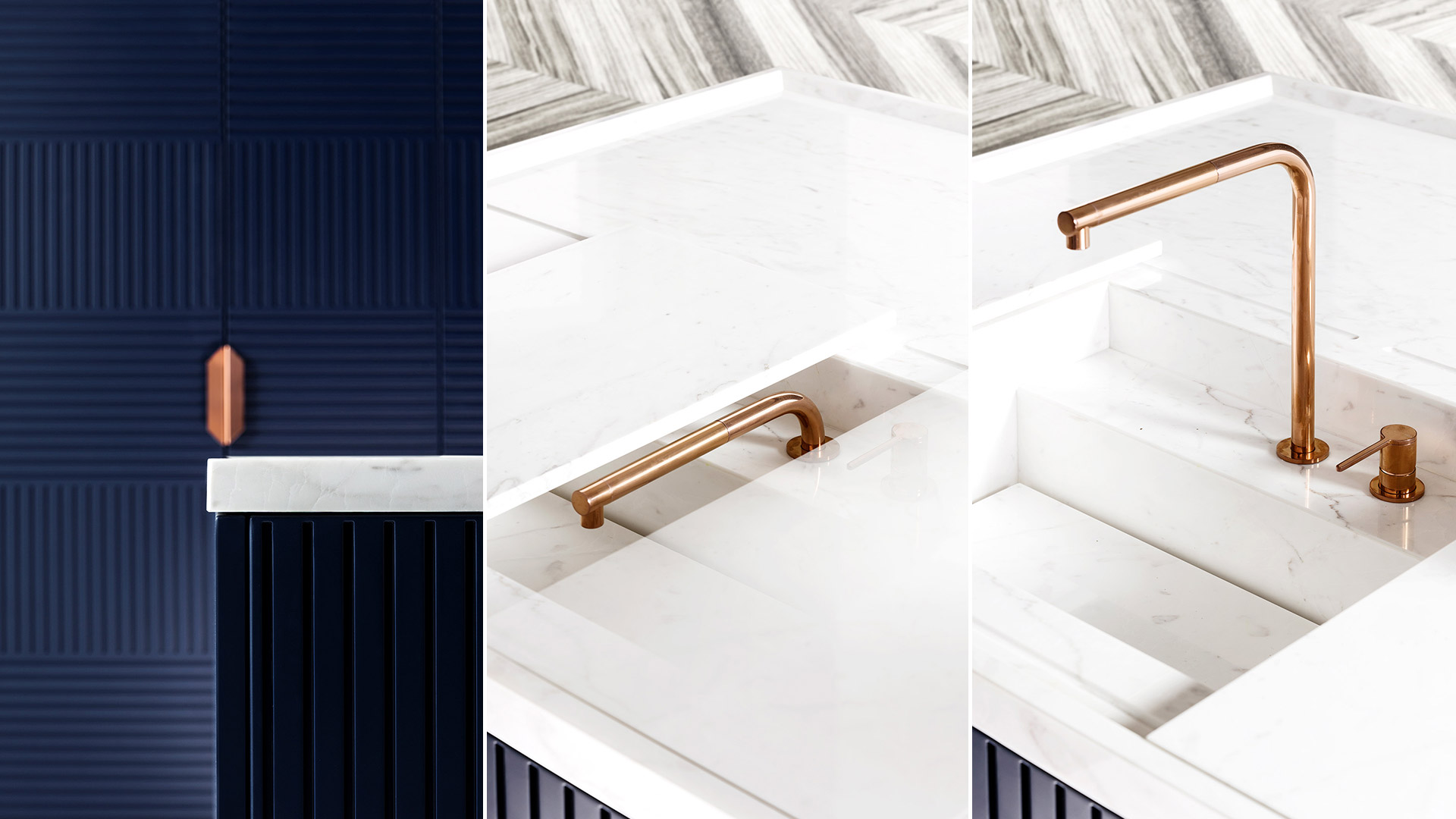 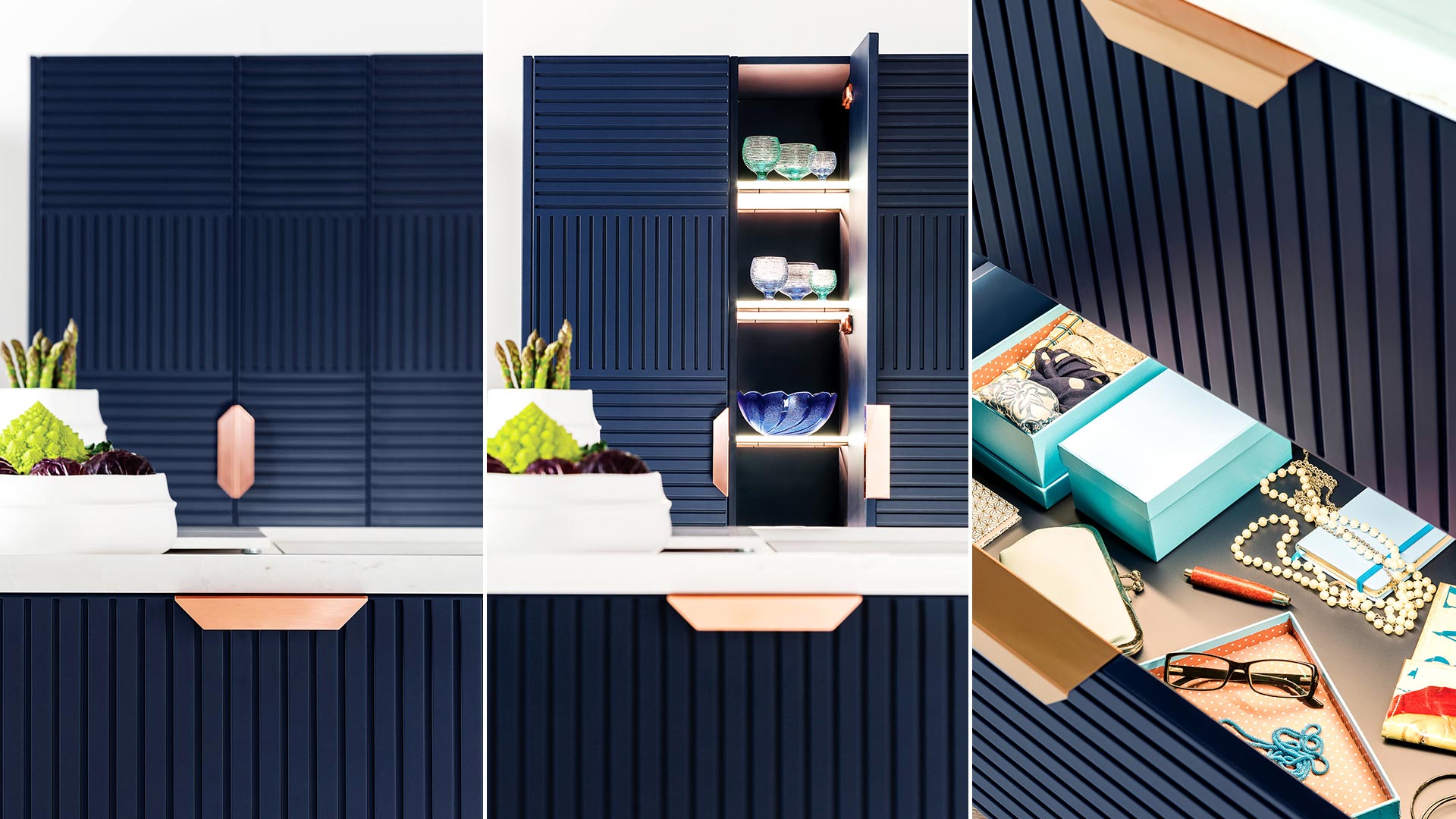 “The formal precision of the Miuccia enables it to be sophisticatedly combined with the areas adjoining the kitchen, allowing the customer to supplement the compartments or apply Miuccia to an open space with a distinct style. The set-up is the result of more than fifty years of experience in bespoke kitchen furniture that merges technological innovation and Italian craft excellence.”

Mecca is exclusively available through TM Italia, with ordering information available upon request.