The Beijing 2022 Winter Olympics are officially behind us, but we couldn’t resist giving the games’ stunning architecture a proper send-off. While some of the venues weren’t exactly “new” — the Beijing National Stadium, for example — they still stand out as being some of the most impressive design gems ever to host the global sporting event.

Next time you watch those stunning triple axles and gnarly tricks from the skiers and boarders, take note of the following architectural marvels: 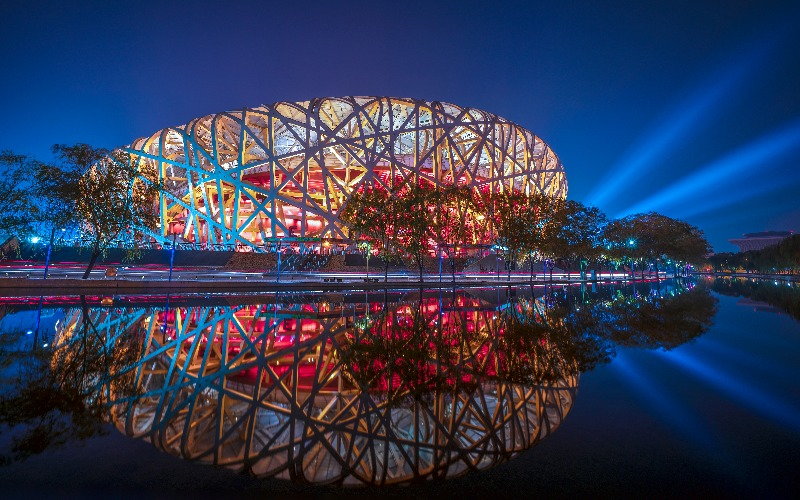 Built ahead of the 2008 Beijing Summer Olympics, the Beijing National Stadium (also known as the Bird’s Nest), was conceived by the inventive Swiss architecture studio Herzog & Meuron.

Following the Olympic Committee’s decision to start reusing venues for a more eco-friendly, sustainable approach, the National Stadium has the distinction of being the only stadium to host both winter and summer Olympics. In addition to its unique shape and dynamic design, the Bird’s Nest also just so happens to be the world’s largest steel structure — making it the ideal place to host the opening and closing ceremonies of the 2022 Olympics within its illuminated latticed walls. 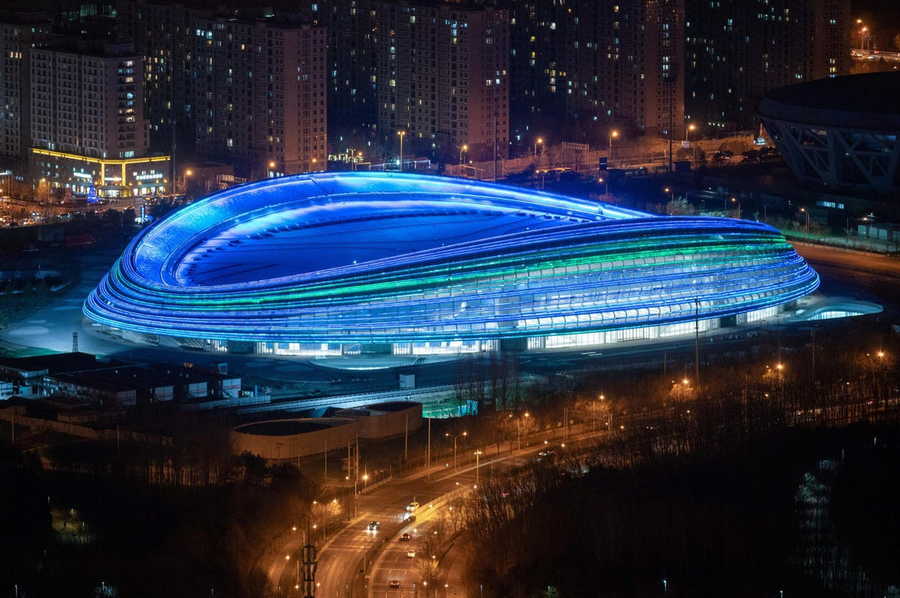 Designed by architecture studio Populous (themselves no strangers to spectacular stadiums), the National Speed Skating Oval is one of only a few new structures built for the 2022 Winter Olympics.

Built on the former site of the 2008 hockey and archery fields, the Oval’s mind-bendingly melty shape (designed to let the spectators hear even the faintest ice scrape) is certainly distinctive — but it’s the 22 strands of electric blue light circling the stadium that really make it a showstopper. Dubbed “The Ice Ribbon,” the Oval is destined to be one of the highlights of this year’s Winter Games. 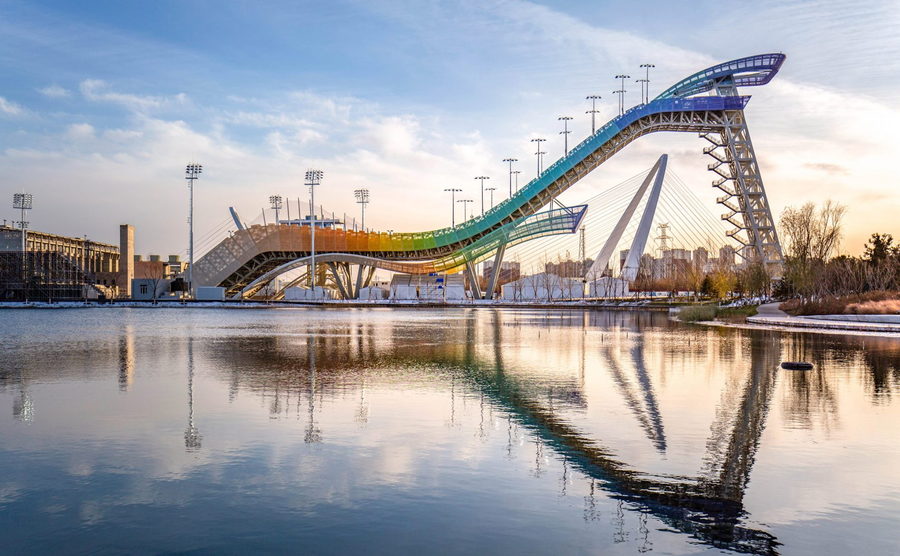 Completed in 2019, the rollicking ramp Big Air Shougang marks another new addition to the Beijing Winter Olympics roster. Designed by TeamMinus, the structure is “the world’s first permanent big air structure” and will, not surprisingly, host skiing and snowboarding’s trickiest, most extreme big air events. Set on the site of a former steel mill, the ramp itself has an industrial feel to it, while the colorful aluminum side panels add bravado and flair to the scene. 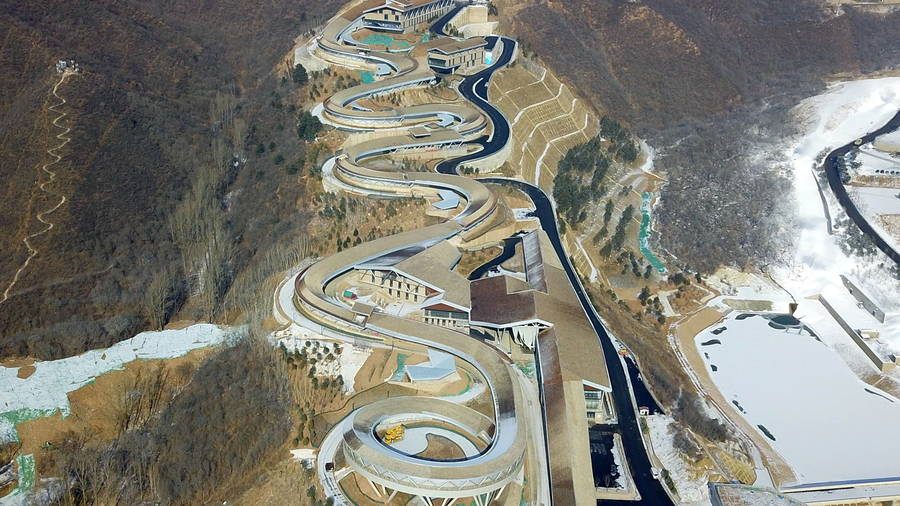 Located in the Yanqing Olympic Zone north of Beijing, the National Sliding Center is yet another new addition to the Winter Olympics’ stellar architectural lineup. Designed by Atelier Li Xinggang, the over one-mile-long sliding track is topped with an impressive tiled wooden roof covering the winding trails below.

The primary site of the bobsledding, skeleton, and luge events at the 2022 Olympic Games, the Sliding Center is the first of its kind in China — and only the third to be built in Asia. 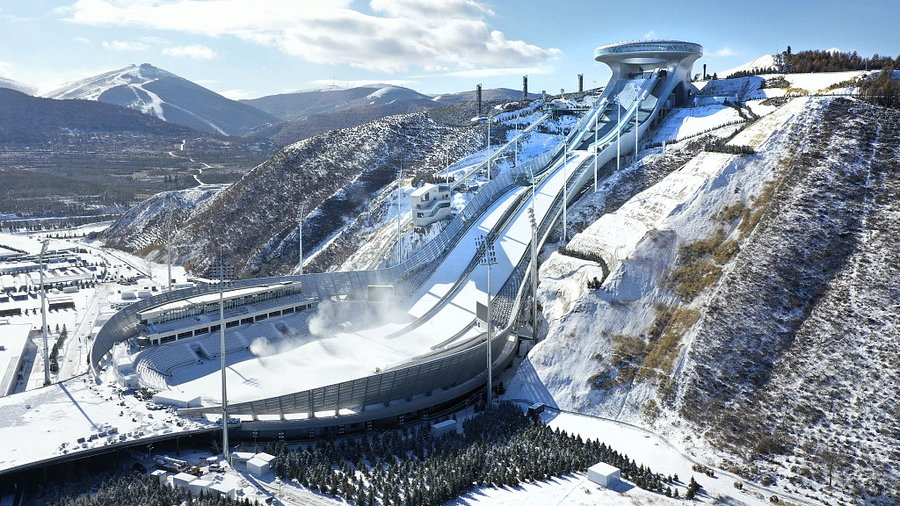 Nicknamed “Snow Ruyi” because of its resemblance to a ruyi, a traditional Chinese talisman representing power and good fortune, the center is located in the Zhangjiakou Zone northwest of Beijing — itself already a popular ski destination. Topped with an over 100-foot-high circular viewing platform complete with a panoramic restaurant, the Ski Jumping Center will surely be a destination for years to come due to its fabulous location, stunning vistas, and proximity to a new intercity railway.

While many of the structures at the 2022 Beijing Winter Olympics were repurposed faves from the 2008 Summer Games, we also saw an impressive new lineup of structures built expressly to host this year’s exciting events.

Next time the games roll around, take a moment between cheering Team USA and catching some curling to get a glimpse of some of the most inventive new architecture out there. You’ll be glad you did.