Squid Game isn’t just Netflix’s biggest non-English-language show in the world — it’s the network’s most-watched show ever (and if you haven’t seen it yet, warning: minor spoilers ahead). The wildly popular dystopian series by director Hwang Dong-hyuk follows a group of 456 indebted people who willingly compete to win 45.6 billion won (about $38 million USD) in prize money, even with the knowledge that if they lose, they die. The South Korean series is a dramatic interpretation of mass societal competition as a high-stakes game in which there’s only one victor, and therefore only one survivor. 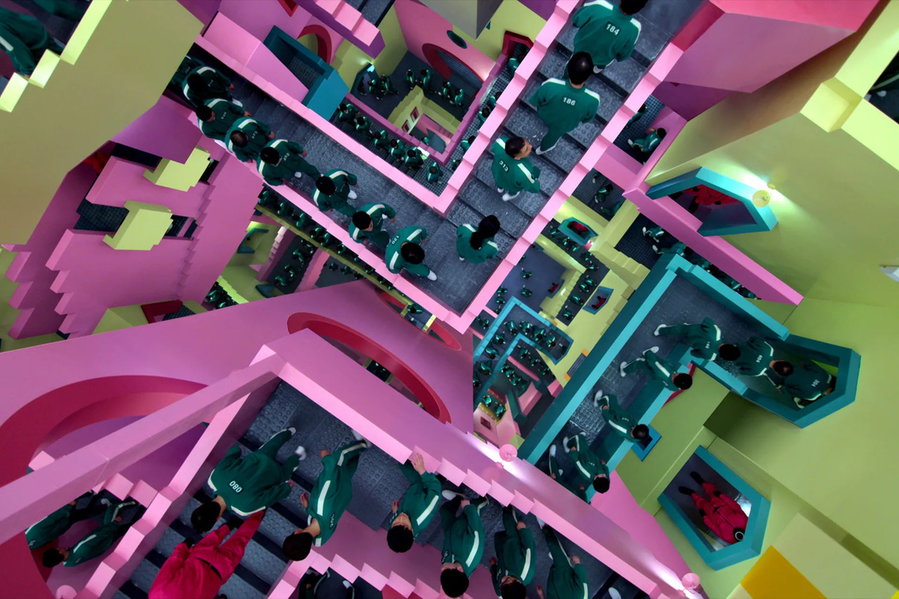 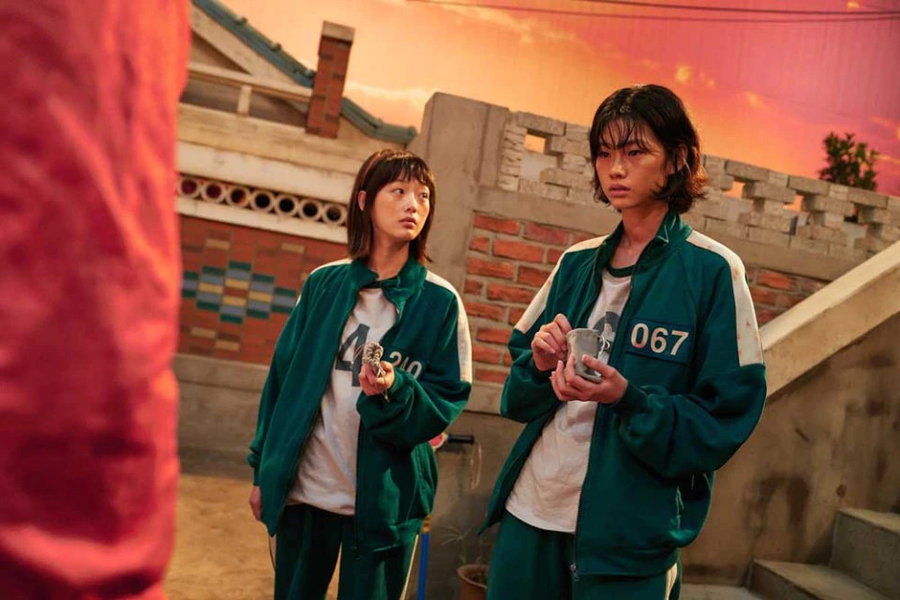 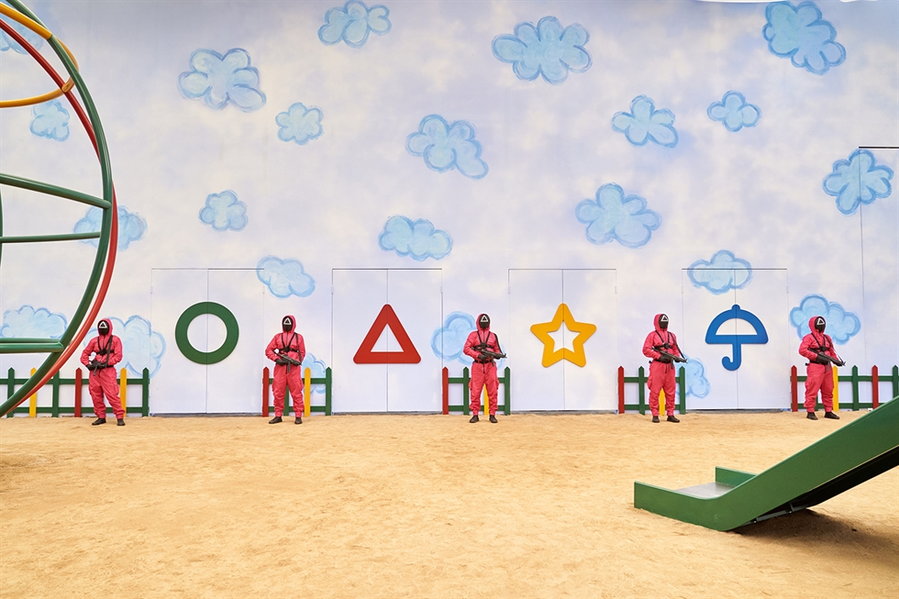 A new twist on the “battle royale” genre (named for the Japanese film of the same name), Squid Game uses a collection of candy-colored sets to illustrate an essential contrast between childhood innocence and disillusioned depravity. Architecture plays a key role in setting an oppressive, dread-inducing mood, and each set introduces a new emotion or psychological trigger for the contestants to grapple with in the midst of all the chaotic violence. 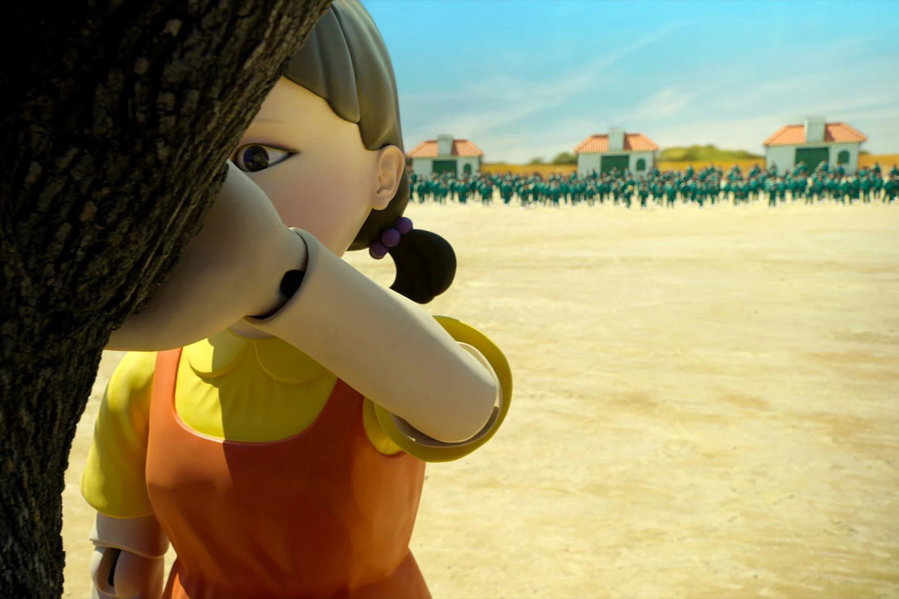 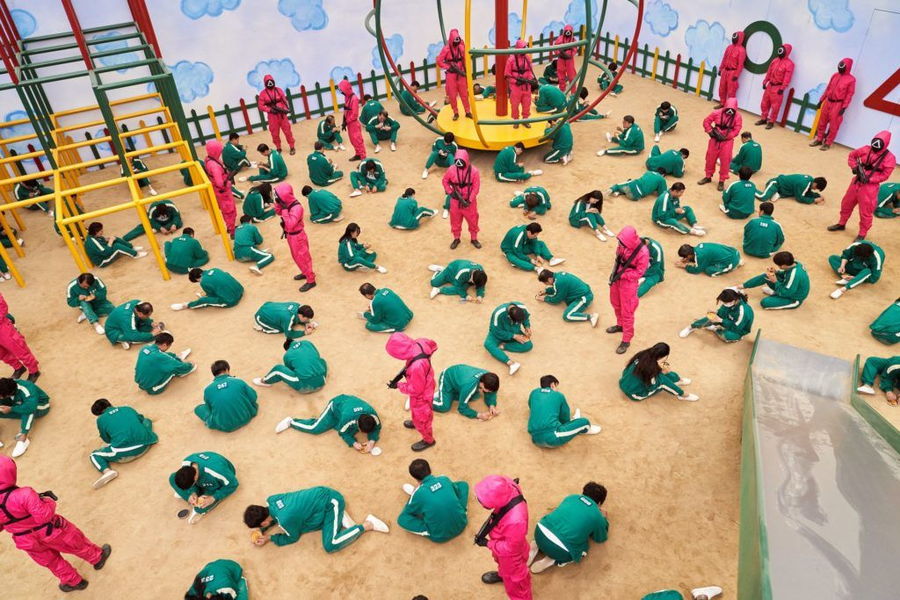 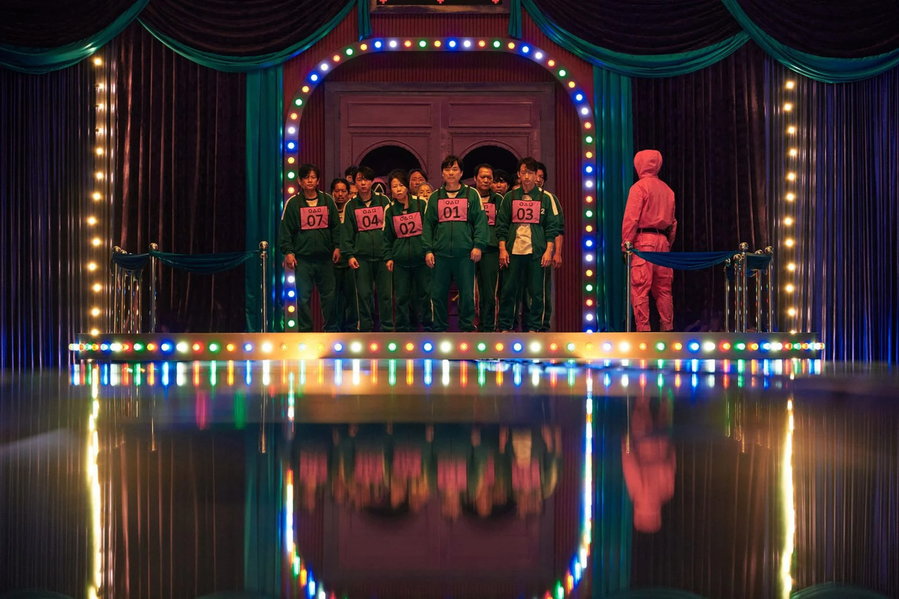 Six classic kids’ games, including tug-of-war and a version of “red light, green light” featuring a terrifying oversized animatronic doll, take place in eerie combat arenas seemingly symbolizing stages of human life. The first looks like the sort of outdoor setting you might play in as a child, with a cheerful blue sky overhead. The second is a cartoonish playground, and the third features giant yellow platforms suspended high up in the air with a dark backdrop. The fourth features a set modeled on a traditional Korean village with alleys and houses, and the fifth places each contestant in a circus-like environment with a glass bridge and flashing lights. Step on the wrong section, and the glass will break, plummeting the contestants into an abyss.

In a Netflix interview, director Hwang explained that he tried to simulate the atmosphere of real playgrounds for some of those sets, sand and all, featuring oversized equipment that reduces the adult competitors back to their childhood size. “Death games commonly take place in terrifying, horrible places,” Hwang says, so instead, he and art director Chae Kyoung-Sun tried to make the sets “look cute and sweet, as a place to trigger nostalgia.” 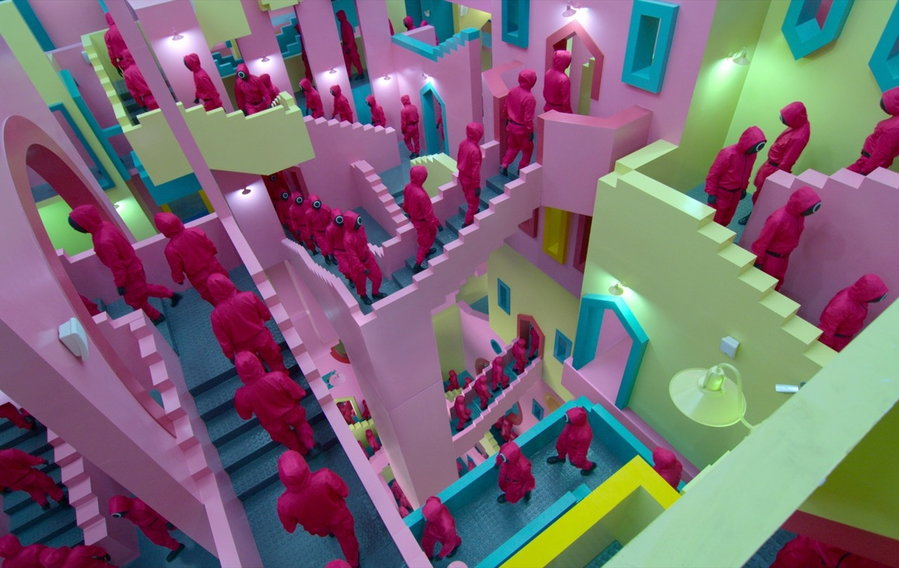 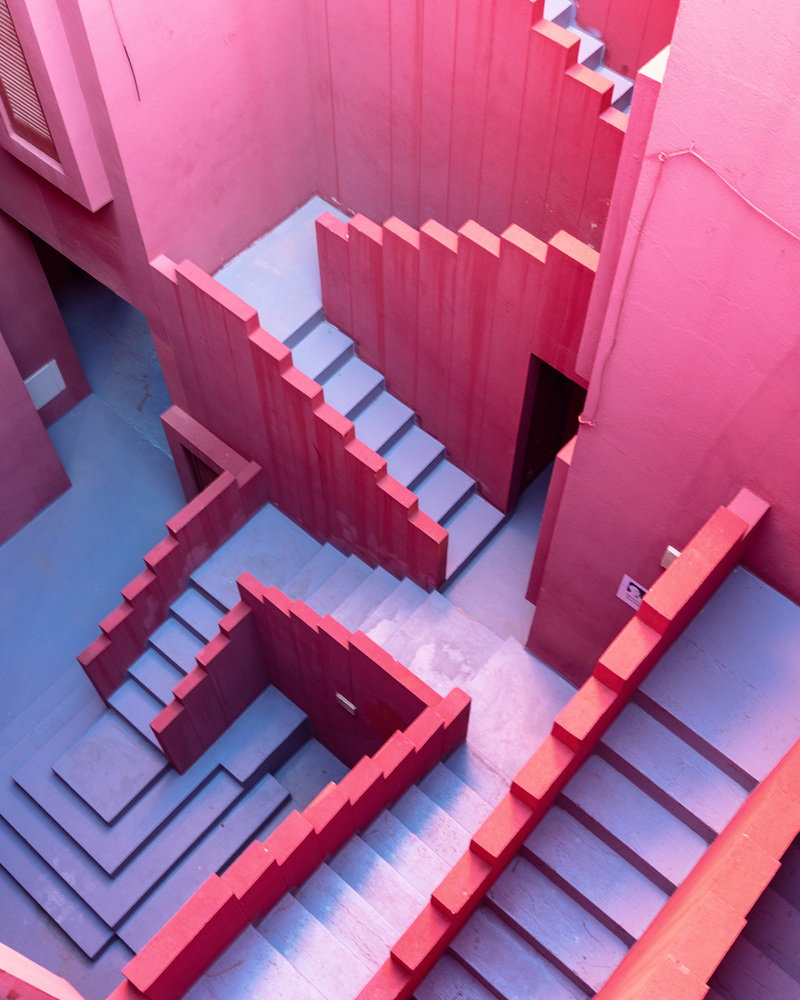 Most dramatic of all are the disorienting labyrinthine staircases the contestants must climb to access each game arena. Hwang notes that he took inspiration from Dutch artist M.C. Escher’s lithograph print called “Relativity,” but if you’re an architecture buff, you’ll likely note an even more striking similarity. The bright colors, staircases, and stepped walls look almost exactly like a real-world building by Spanish architect Ricardo Bofill called La Muralla Roja. Located in Calpe, Spain, the housing estate completed in 1973 is painted red outside with internal areas in bold shapes of blue and violet, all set against views of the ocean. Bofill’s creation, which features swimming pools and solariums as well as 50 apartments (some of which you can rent on Airbnb), is a far cry from the Brutalist architecture that usually inspires dystopian films and series. 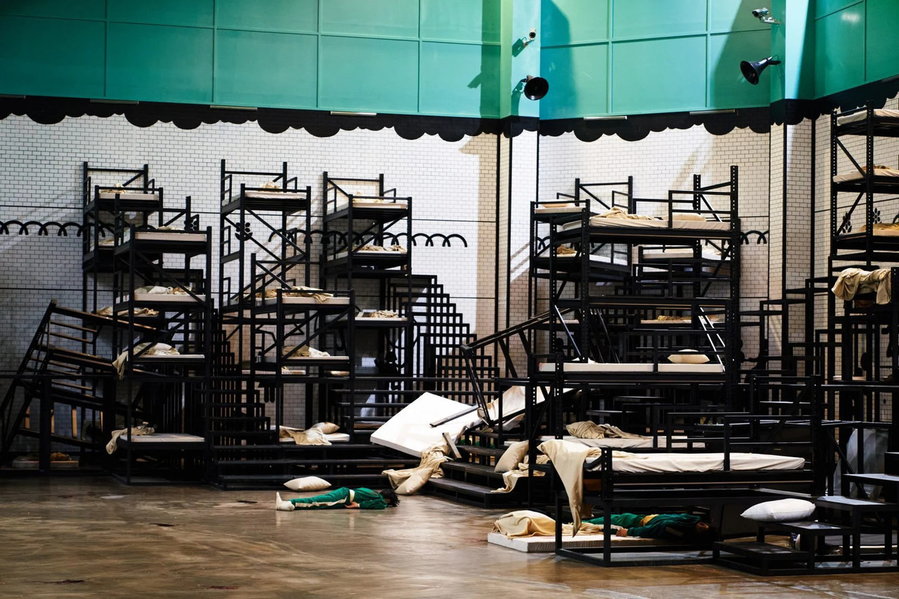 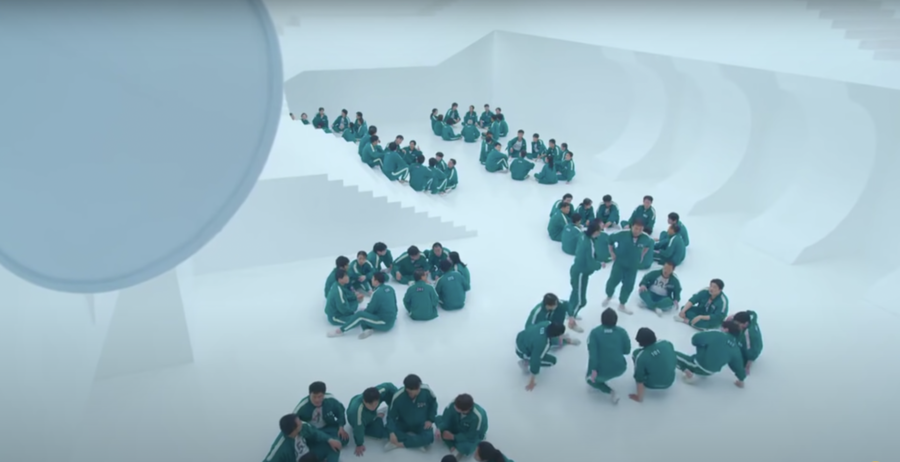 The contestants sleep in a giant gymnasium where bunk beds are stacked against the wall in terraced configurations, calling to mind the design of a Roman Colosseum, especially when viewed from the contestants’ perspective, making them both viewers and participants in the spectacle. But the stacked beds also reference goods in a warehouse, depersonalizing the contestants, and the figurative ladder-climbing we all must do to succeed in modern society. Another set, a stark white waiting lounge, evokes the curving, utterly colorless and spaceship-like works of Iraqi-British architect Zaha Hadid, like the Heydar Aliyev Center in Baku, Azerbaijan. 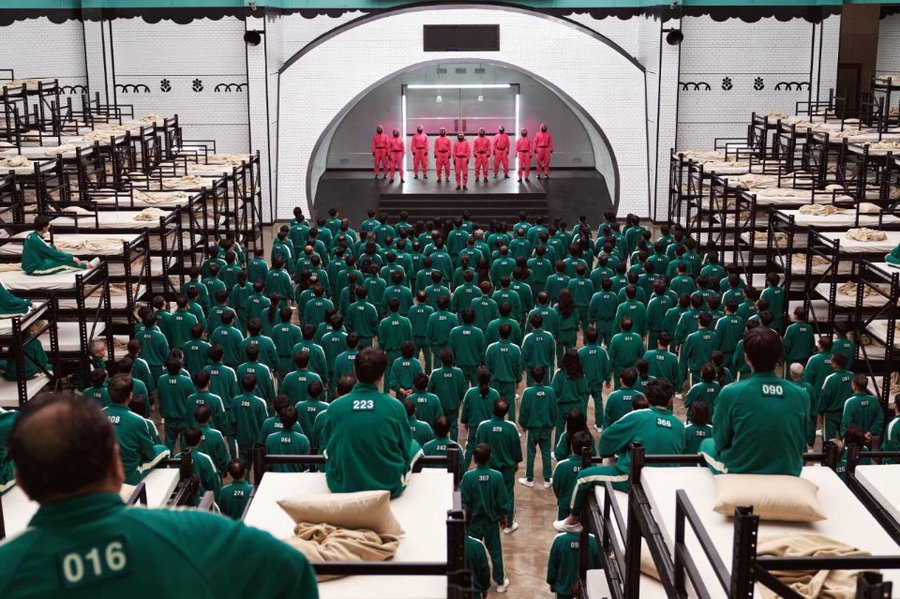 Viewers have all sorts of personal interpretations of exactly what Squid Game is critiquing: capitalism, communism, the stereotypical competitiveness of contemporary Asian society, and the fact that most of us struggle through the challenges of everyday life and get left behind while a handful of winners “level up.” Whatever your takeaway, this is one series you won’t forget anytime soon.