Tent cities are an uncanny and urban design phenomena – in most cases their creation is neither officially planned nor sanctioned by a city from the outset, but in many instances cities quickly realize they have no alternative but to let them be. With recent economic troubles around the USA existing ones have grown and entirely new tent cities have been created. But what does it mean to be forced to live a makeshift lifestyle that no one really designed? 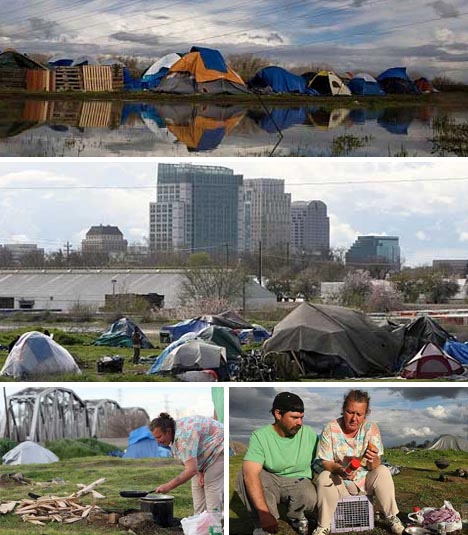 Continue reading below
Our Featured Videos
As a culture historically obsessed with caravans, we glorify the flexibility of mobile living and imagine freedom to be found portable houses that can go anywhere and are not limited by building codes and conventions. In reality, of course, those who cannot afford to live in modern mobile homes and are forced to camp in makeshift groups have difficulty finding not only privacy but in many cases good access to clean water for bathing and drinking as well.

In some areas, local laws prohibit tent cities outright and residents are forced to hide in forests or otherwise undisclosed locations to avoid raids and harassment by police. In other cities, the sudden fact of hundreds of people living in a parking lot simply has to be accepted when shelters are already bursting at the seams. With repossessed homes, no income and no credit some individuals and families have no other option.