Once they were cool, if just a tad bit weird. Sunken conversation pits built right into the floors gave loungers a cozy place to hang out, with plenty of room for large groups and an inward-facing design that encouraged social interactions. Unfortunately, the 1960s and 70s originals were also magnets for dirt and dust, not to mention accidents. Kids, pets and drunken guests were prone to falling right in, sometimes injuring themselves on the hard surface of the pit’s floor. While they were declared passé decades ago, these kitschy retro interior features may actually be making a comeback — with a few slight alterations to make them safer and easier to clean, of course. 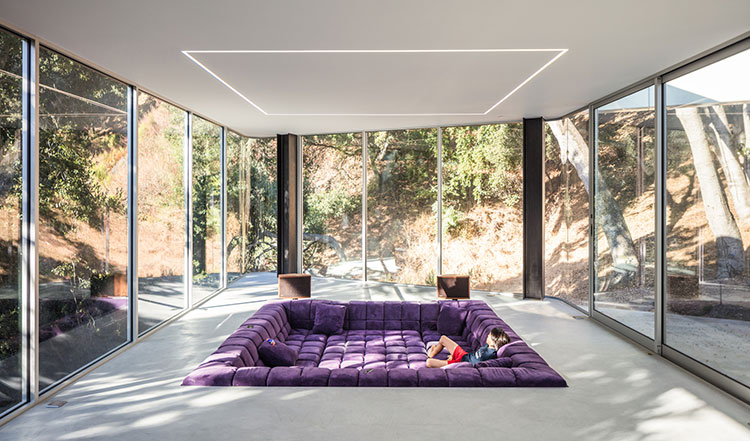 A new Craig Steely Architecture-designed home called “Pam and Paul’s House” in Cupertino, California shows just how that can be done. Envisioned as an elevated glass box sitting on trunk-like supports among the treetops, this modern residence includes not one but two sunken spaces built into its ground level. 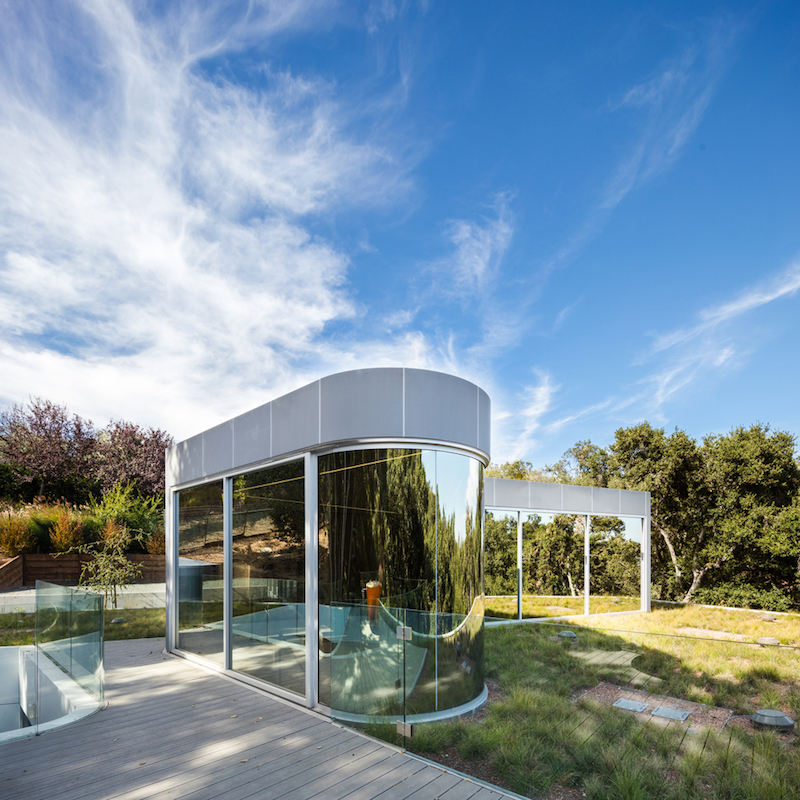 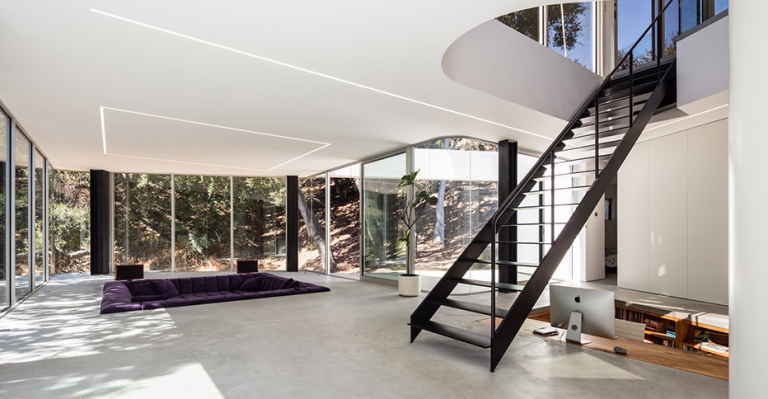 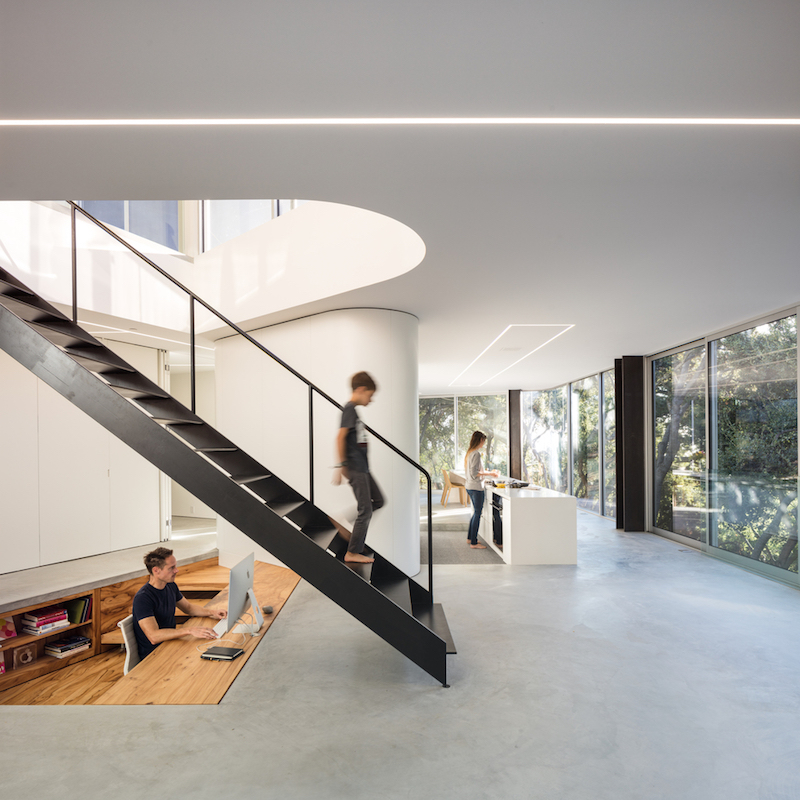 The first is a small wood-lined office with hidden storage, and the second is a kid-friendly padded pit that’s fully upholstered in 144 square feet of designer Patricia Urquiola’s “Tufty Time” microfiber sofa components. The conversation pit and office are like twin pools of warmth in a space that might otherwise feel a bit cold with all of its concrete surfaces, glass, and zig-zagging strips of LED lighting built into the ceilings.

Instead of carving out a central void for a coffee table, the architects made the conversation pit all one depth, padding the entire area for enhanced lounging. Rather than facing a television (like the furniture in most living rooms does) the pit enjoys views of the surrounding forest on three sides through sliding glass walls. 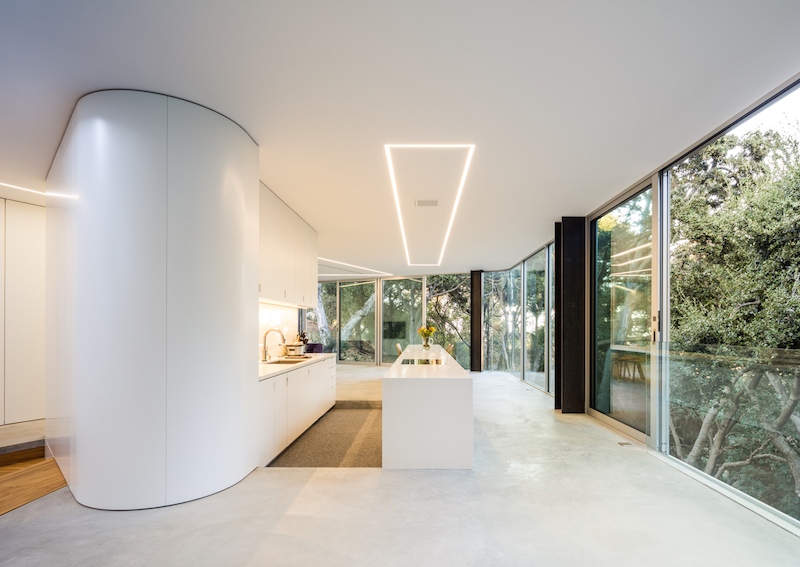 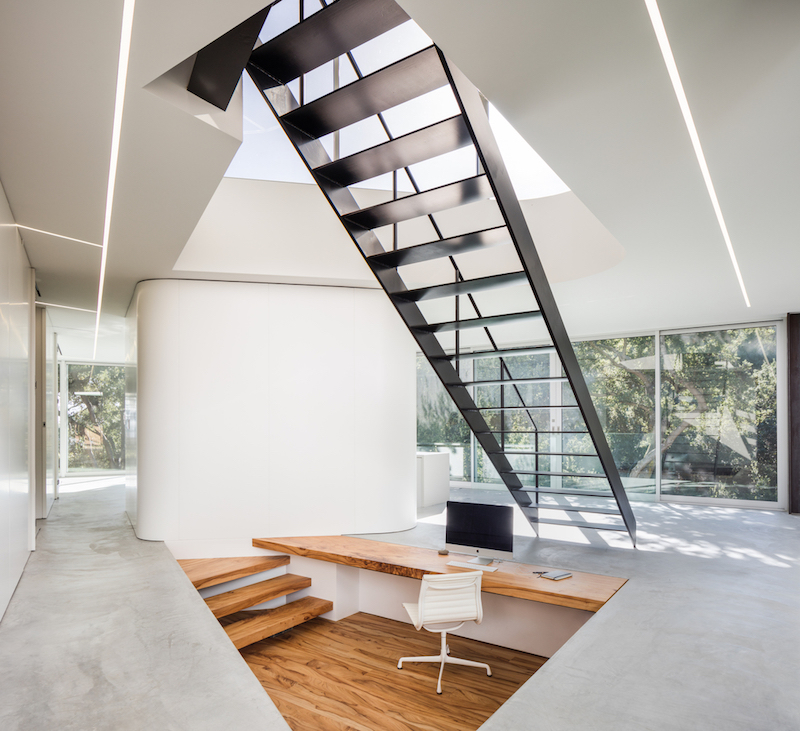 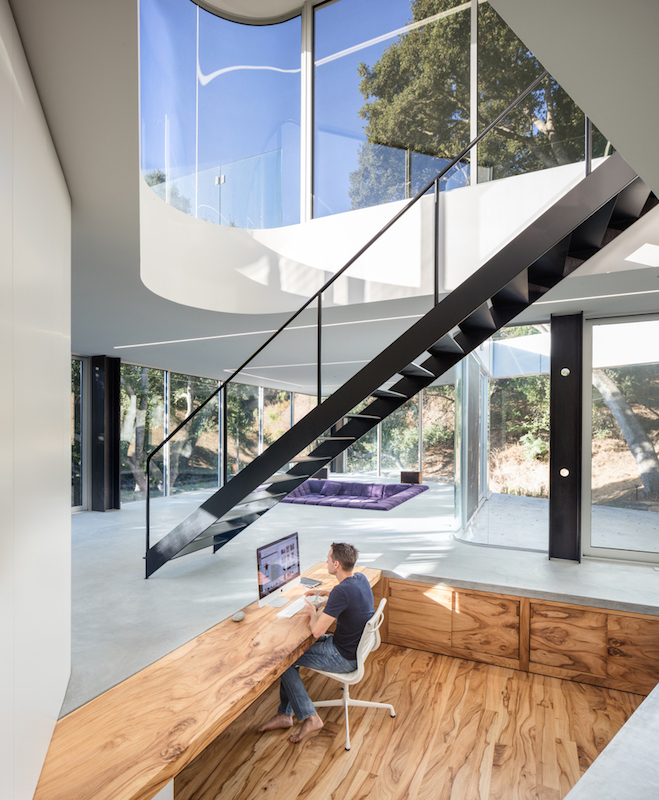 Every surface in the sunken office, including the tabletop, cabinets, and flooring, is milled from a single slab of Chinese pistachio wood (hopefully the owner’s computer monitor won’t get knocked right in by galloping children or dogs). On the other end of this level, past the gleaming white kitchen with its 22-foot-long counter made of white composite quartz, is a more conventional living area.

Located in the foothills of the Santa Cruz mountains, the home is set into a steep site, and its entrance is on the second level, which itself is accessible by way of a steel bridge. This level also includes a garage that overlooks a meadow-like terrace filled with native grasses, while the bedrooms are tucked in close to the hillside on the ground floor. The dense woods surrounding the home give it both privacy and shade, making all that glass a lot more livable than it would be otherwise. 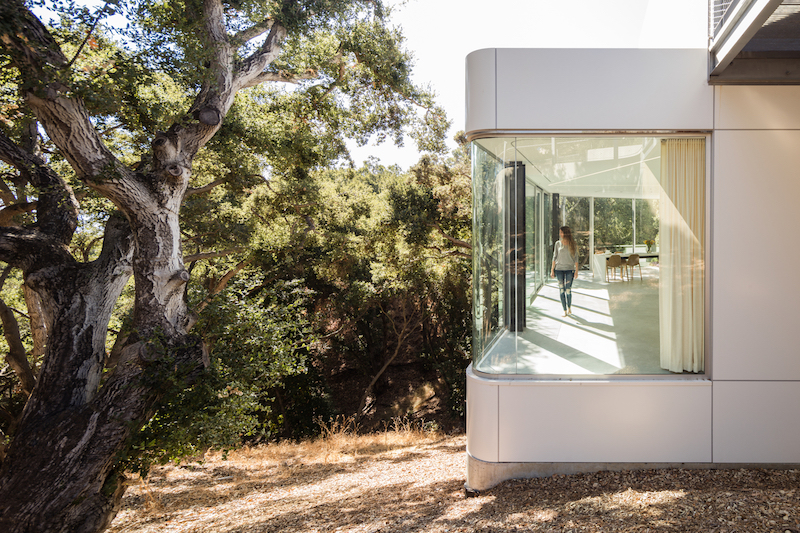 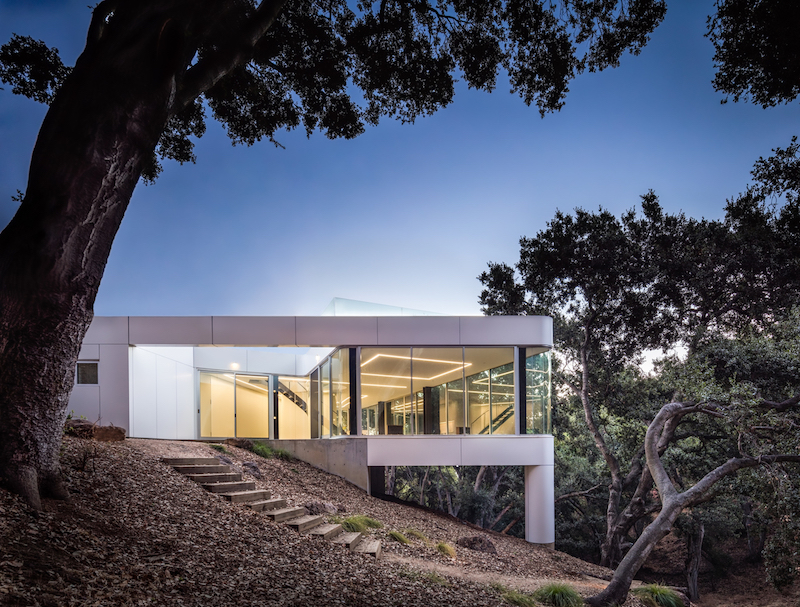 “The house sits at the boundary between suburb and wilderness and straddles the two like it sits on the site. Just as they did before construction, mule deer rest in the shade of the cantilever which is now a continuation of the oak canopy. Gray squirrels run along the branches and wild turkeys roost in the treetops, merely 10 feet away from the kitchen table. The expanse of glass feels permeable and disappears only to leave nature as it always has been in the grove.”

All photos by Darren Bradley