If you’re an avid book collector, chances are you’ve got entire shelves devoted to a particular favorite genre, whether you’re addicted to epic fantasy, enamored with historical romances, or a voracious consumer of comic books. So why not properly display these prized possessions in themed bookcases? These 10 fun and often geeky bookshelves pay tribute to time travel, superheroes, dragons, and tell-tale hearts with artistic and sculptural designs. 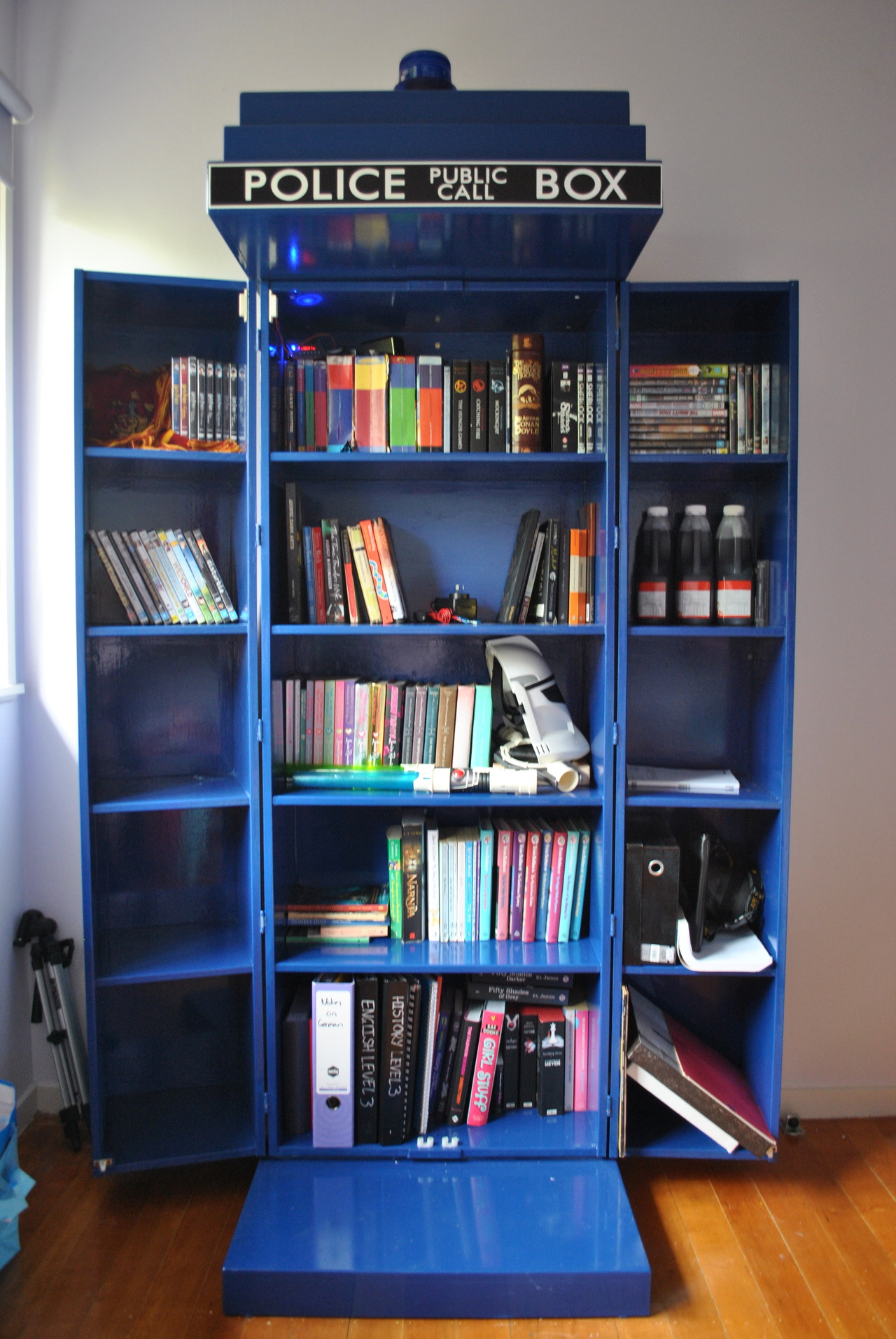 What Doctor Who fan wouldn’t jump at the chance to show off their very own TARDIS? Even if it’s just a storage space for a collection of science fiction books, it’s fun to imagine it doubling as a time travel machine. Modeled on police boxes commonly seen around England, the design makes for a fun and clutter-free book cabinet that can be closed or opened to put your books on display or intrigue your guests. If you’re handy, you can make your own with a tutorial from Gears4Brains on Instructables. 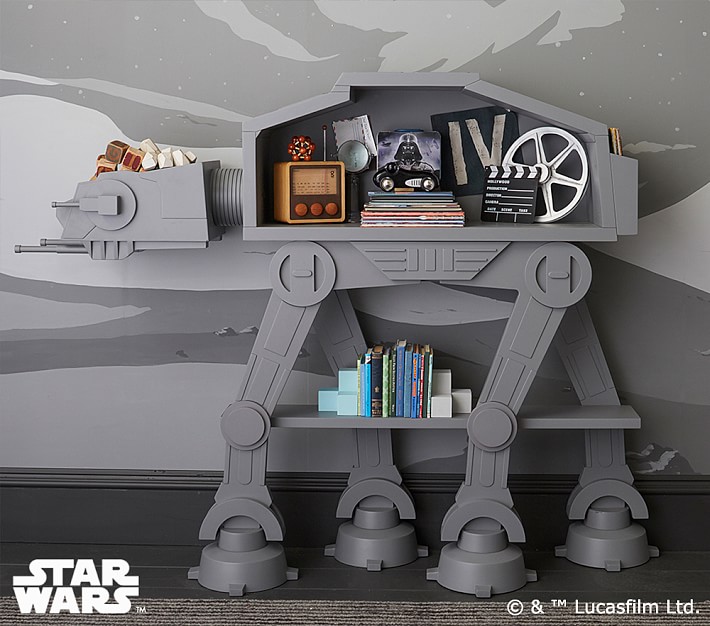 Continue reading below
Our Featured Videos
This AT-AT bookcase by Pottery Barn is meant for kids, but there are probably more than a few adult Star Wars fans who would love to integrate it into their living room or office decor. It’s made of solid poplar and engineered wood, hand-painted in charcoal finish, and features two shelves as well as some storage space in the head. 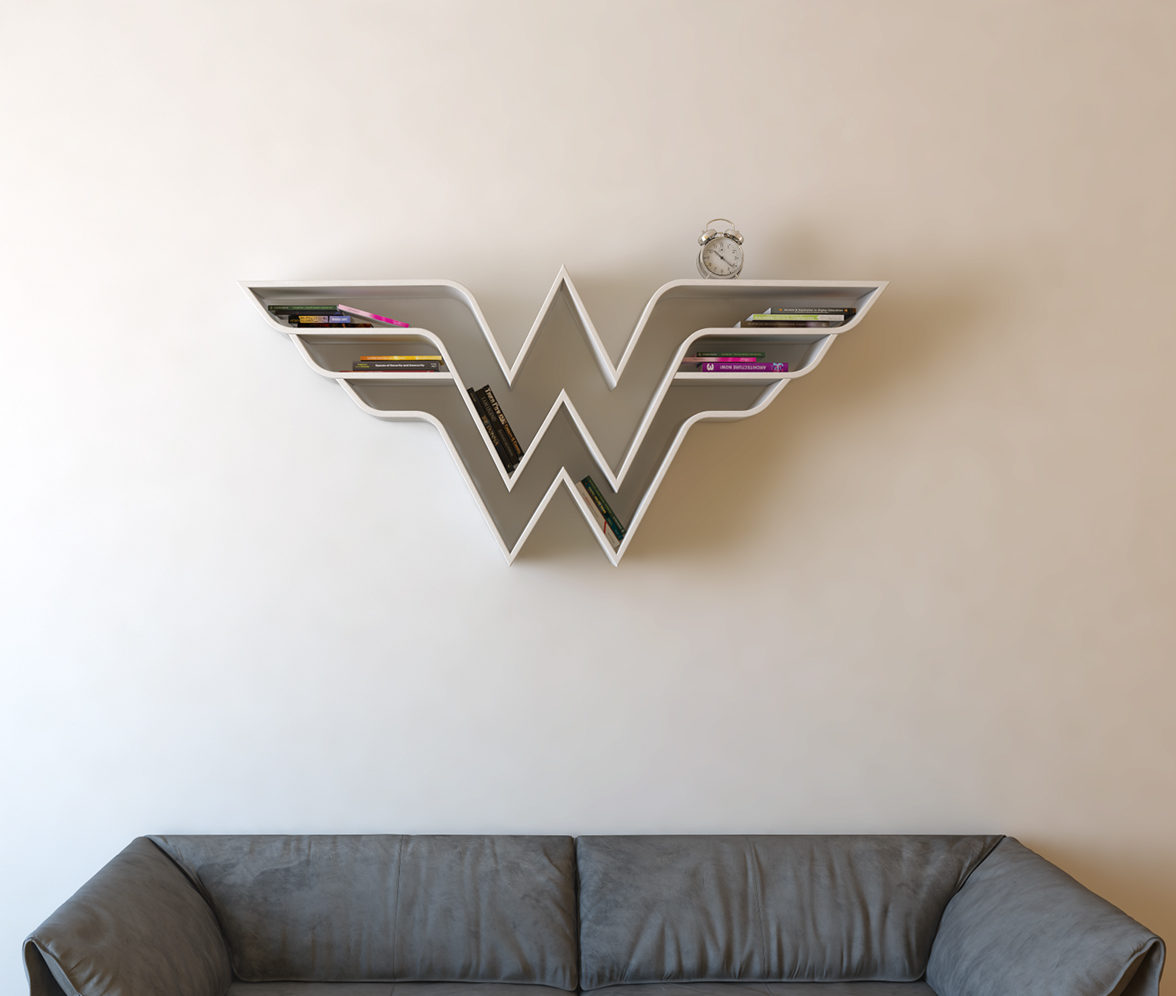 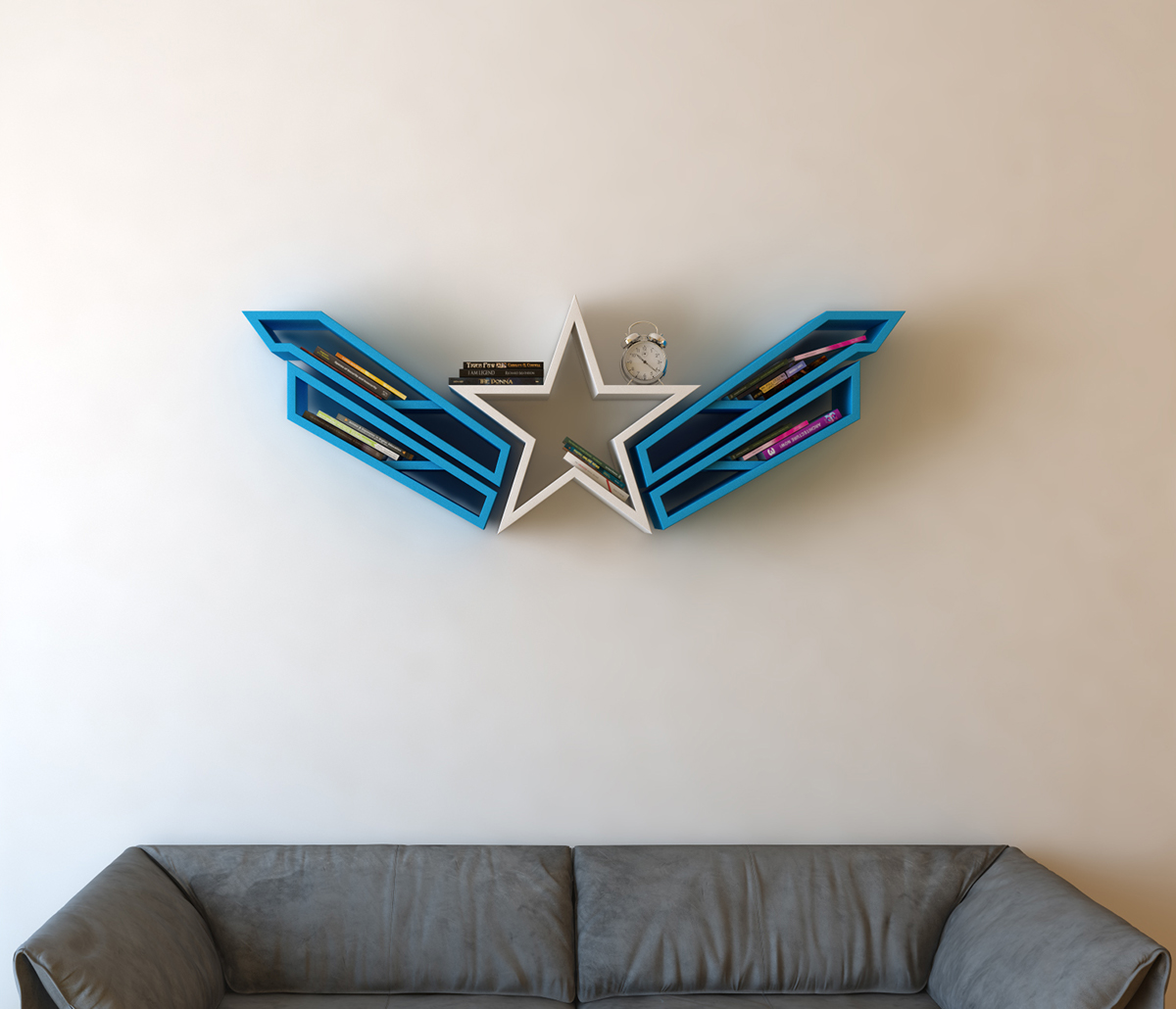 Clever modular bookshelf systems envisioned by industrial designer Burak Dogan align just the right way on the wall to represent the logos of major superhero characters and franchises, including Superman, Wonder Woman, The Avengers, Captain America, and Agents of S.H.I.E.L.D. Dogan is currently seeking a sponsor or manufacturer to produce and sell these designs.

Etsy is a great place to find geeky custom bookshelves cut into specific shapes, including the version of the Batman logo popularized by Christopher Nolan’s film series. This one comes from Hungary-based seller Csiszer Wood. 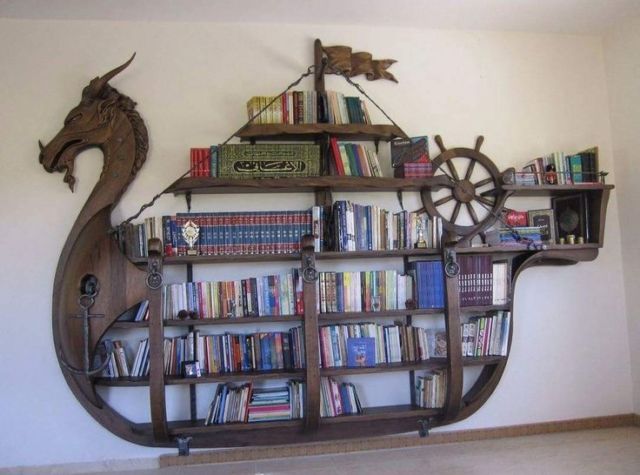 A dragon-themed bookshelf is a fitting way to display stories of fantasy and myth. It’s easy to imagine lining the shelves of this beautiful hand-carved custom Viking ship bookcase with tales of Old Norse gods, from Beowulf and the Edda to Neil Gaiman’s Norse Mythology. 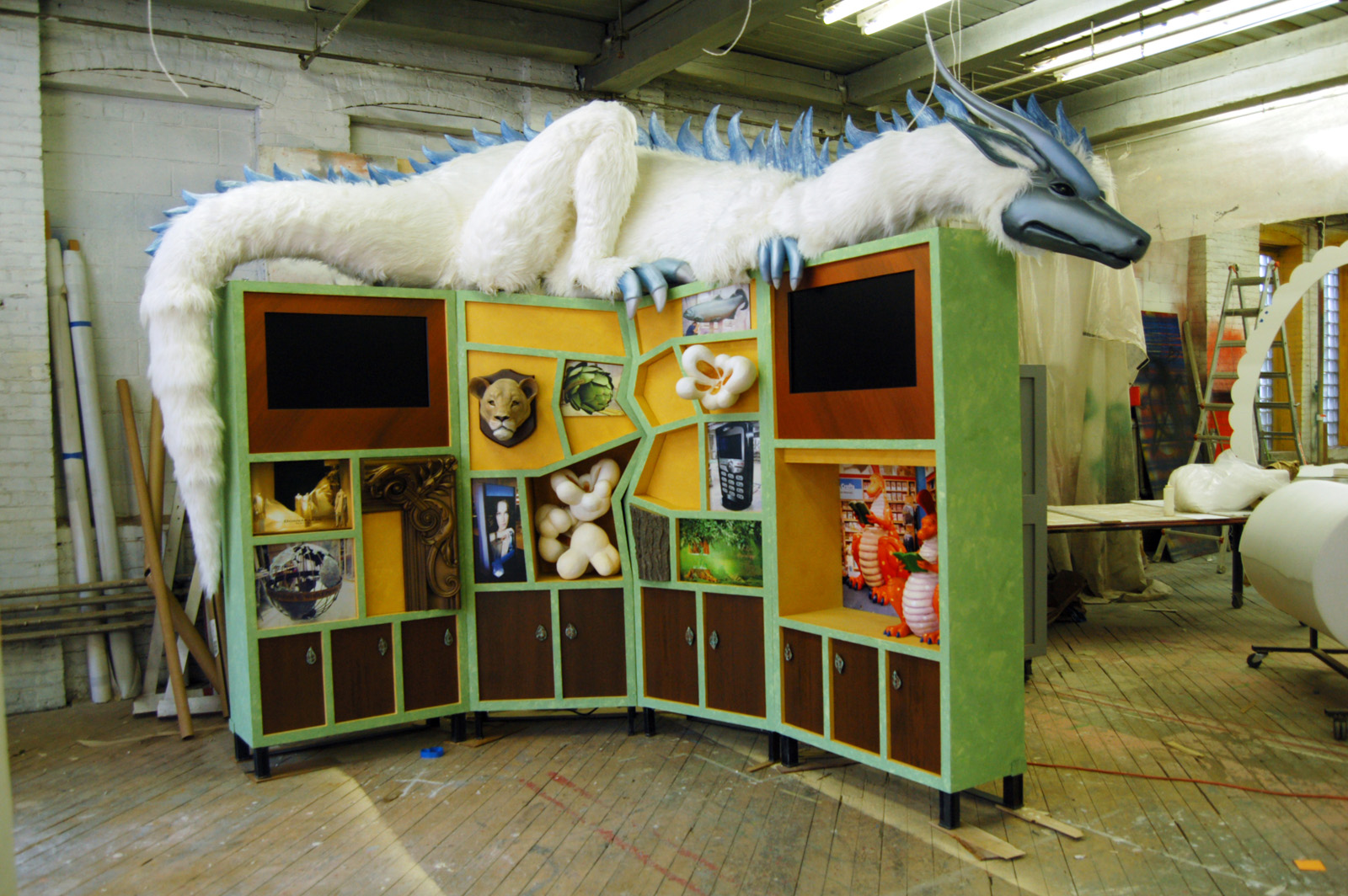 Not quite bold enough for you? Perhaps a nearly life-sized dragon perched atop a bookcase seems better suited to honoring your precious tomes by J.R.R. Tolkein and George R. R. Martin. This one, built by prop maker Eric Hart, is definitely a bit kinder and gentler-looking than the “children” of Daenerys Targaryen. 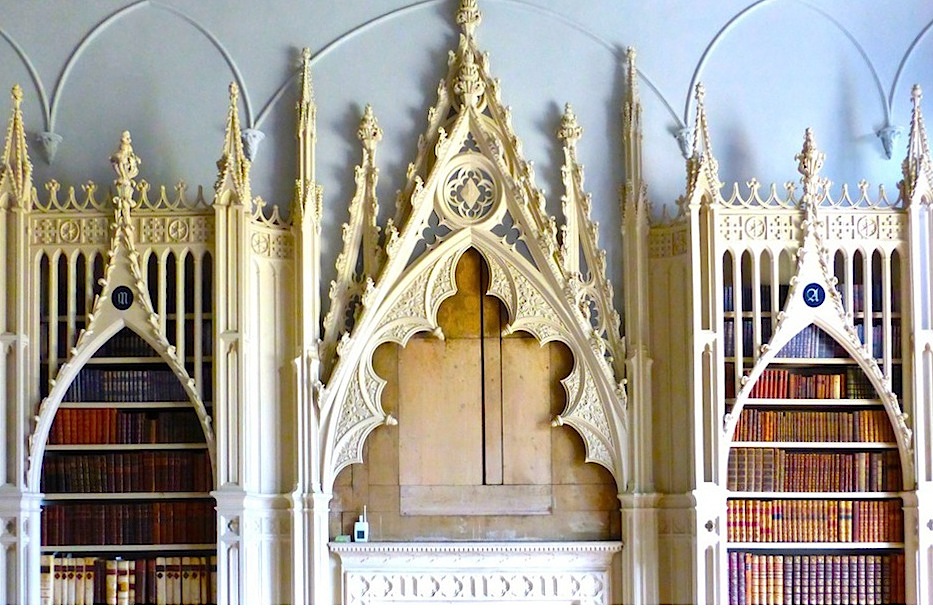 Few architectural or design traditions are quite as romantic as Gothic style, especially when it comes to ornate bookcases adorned in dramatic spires, quatrefoils and sharply pointed arches. The library at Strawberry Hill, a historic Gothic Revival villa in Twickenham, London, offers a perfect example. These floor-to-ceiling built-in bookcases cover the walls of the entire room and even feature family portraits carved into the plaster arches. From Shakespeare to contemporary fictional accounts of the life of Anne Boleyn, anything historical would fit right into this stunning interior treatment. 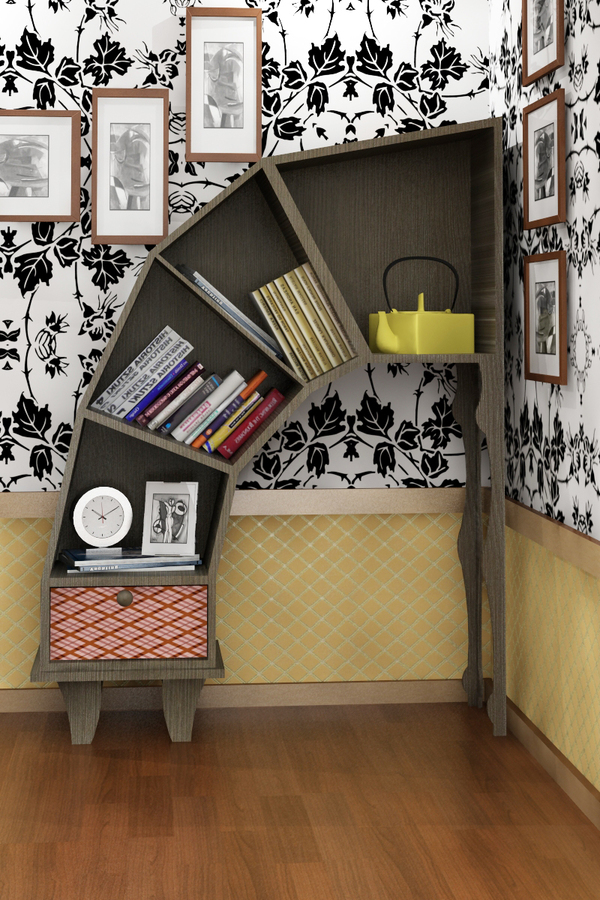 These bookshelves by Victor Parish almost seem to have taken on lives of their own, arching down from the wall as if they’re just trying out a little yoga. They’re rather Tim Burton-esque, and definitely well-suited to strange and unusual tales.
Want to go in a more classic horror direction for your Anne Rice, Stephen King, Shirley Jackson, H.P. Lovecraft, and Edgar Allan Poe? Coffin-shaped bookcases aren’t too hard to make or find, with lots of them available on Etsy, like this three-foot-tall version by The Haunted Coffin. Real coffins that have been converted into bookcases sometimes pop up on eBay, too.