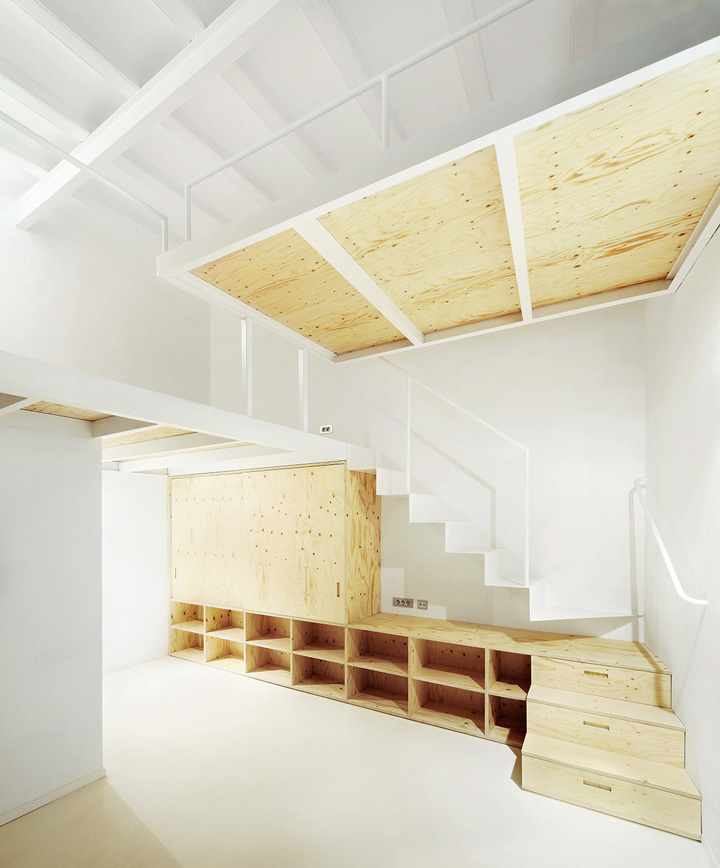 Plywood and white paint are known, respectively, as being cheap and bland … but the combination can make for a marvelous modern apartment with ample storage and surprising spaces (that does not cost overly much to renovate into shape). 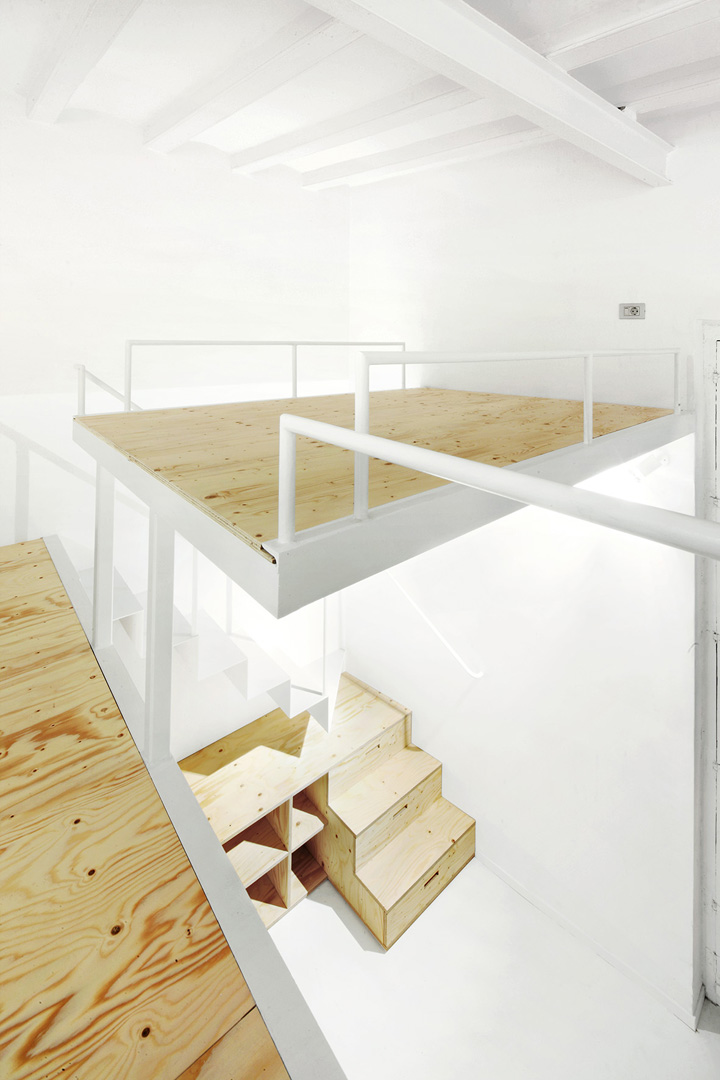 Two rooms and one dividing wall were the starting point for this remodel in Barcelona by Arquitectura-G (photographs via Jos Hevia). From there, the living-and-bedroom half was spliced with a ceiling-hung bedroom loft (hopefully for someone who does not roll over in their sleep!) and packed with built-in cabinets, cubbies, and staircase drawers. 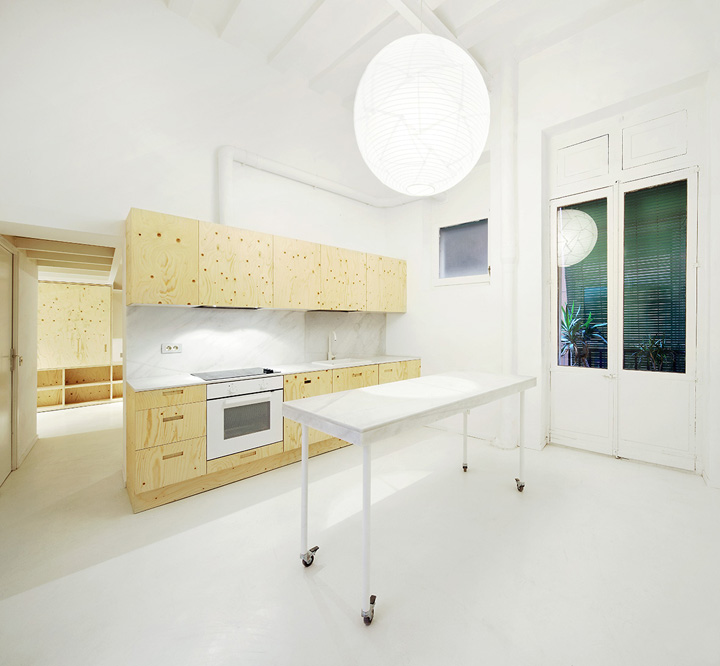 On the other side, a clean and simple kitchen again uses white as the backdrop and light ply to accent the core cooking area, with a slim mobile metal island floating in front of it that can double as a small dining-room table too. 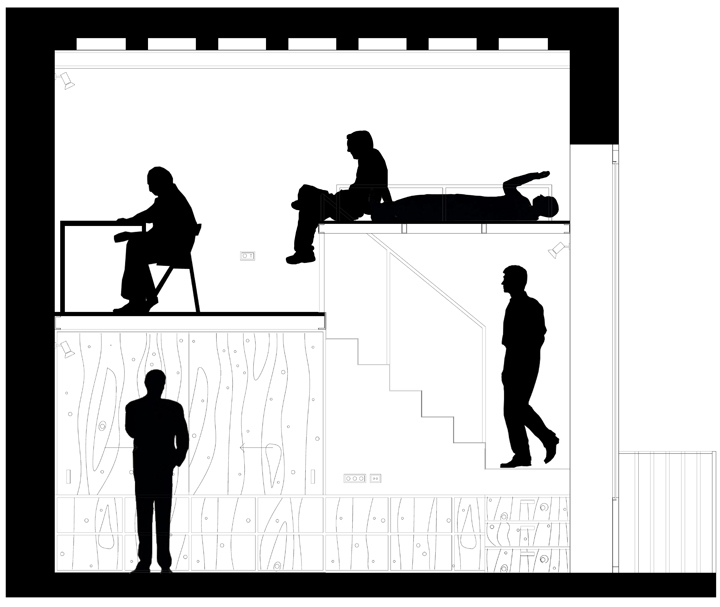 Photos only go so far in depicting a pair of relatively tiny rooms, though – these 3D-projected sectional drawings are a great visual aid to help comprehend the split-level and dual-room experience. 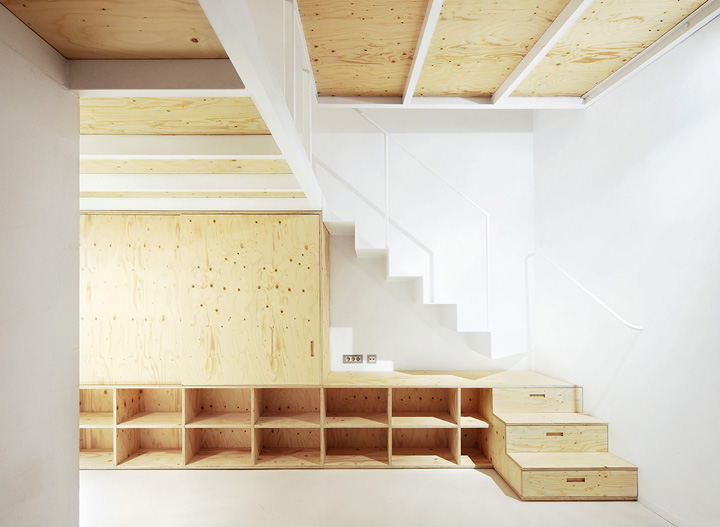 The beauty of this interior lies in part in its status as an apartment – for a full-time, rest-of-your-life home it might seem a bit austere, but as a rental or otherwise temporary urban dwelling it conveys a clear and clean simplicity that sells it as freshly remodeled. With only a few dozen square meters to work with, light-colored wood and paint also help it feel bright and open.

“Housing of 34 m2 and 4.5m high, divided by a load wall in two rooms of similar sizes, located in Born, in Barcelona. Assuming this separation, the project divides the house into two zones:”

“The first is composed of the kitchen and a mobile furniture, which works as a bar, kitchen side table, and dining table. It is a social area linked to the entrance to the house, where the electrical and television installation is improved so that its use extends beyond the mere fact of cooking and eating.”

“The second stay, on the other hand, responds to the needs of a greater degree of privacy. That is why the space is fragmented in different trays that house the program in height, providing a gradient of privacy without losing the visual connection between them.Thus, the first tray, which occupies half of the surface of this room, is understood as an ambiguous dressing room and study area. The second, taller and a quarter of the floor area, contains space for a double bed. For the resolution of this scheme in height, the furniture acquires special importance, adapting to the different spaces, solving the imperative need for storage, and the connection and relationship between levels.”

“Disregarding the current regulations of habitability and building, each area is conferred the necessary scale for its use and each element the appropriate characteristics. The spaces are shaped according to the volume and intimacy they require, and wealth is given by the relationships that are generated between them. For this reason, rather than talking about “above” or ‘below’ spaces, we can also talk about ‘spaces between’, ‘spaces next to” or ‘spaces in.'”