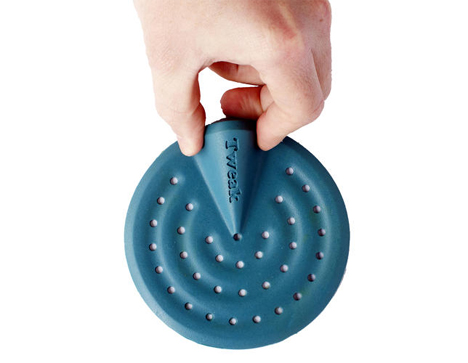 Disposing of the soggy, smelly debris that gathers at the bottom of the kitchen sink is one of the worst parts of cleaning. Even if you have the type of sink strainer with the handle that sticks up from the middle, there’s no telling what kind of nastiness is going to be clinging to that handle – and then there’s the holding it by the edges and tapping it against the side of the trash can to empty it.

Designers Nitzan Shafat and Aviv Rozenfeld came up with the idea for Tweak while students at Shenkar College of Engineering and Design in Tel Aviv. The small silicon device covers up the drain and features a small handle protruding from one side. Yucky stuff gets caught in the middle of the strainer, leaving the handle clear.

To dump the sink debris, you just pinch the little handle and the Tweak turns inside-out. Then it’s easy to dump the disgusting remains of past meals right into the garbage without ever having to touch them directly. 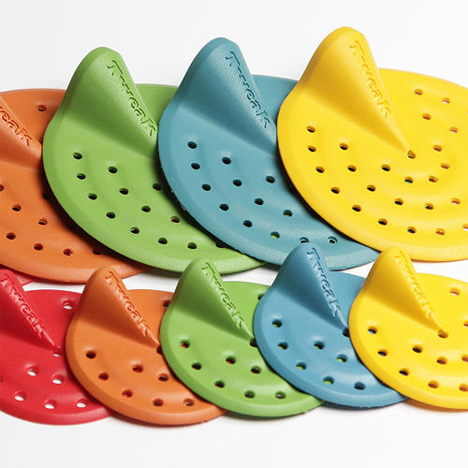 There’s a smaller bathtub version as well, which is intriguing because it addresses an issue that plenty of households face: bathtub drains clogged with long hair. The Tweak catches all of the hair that comes out while you shampoo in the shower, resulting in your having to dump toxic clog-clearing chemicals down the drain far less often. 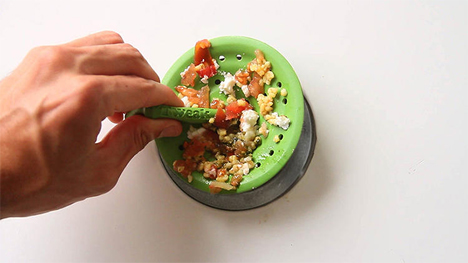 Continue reading below
Our Featured Videos
It seems that there has been a general consensus about the brilliance of the Tweak: the product’s Kickstarter project has raised many times its goal. And really, the product is exactly what it says it is: a small tweak to a familiar design – one that happens to make life just a little bit less icky.