Nobody likes waking up to the panic-inducing bleat of an alarm clock. Instead of gently rousing you, it jolts you out of a deep sleep just so you can spend the rest of the day bleary-eyed and yawning.

Wouldn’t you rather open your eyes to the scent of freshly brewed espresso or invigorating peppermint? A new kind of alarm clock aims to stimulate your senses with pleasant smells, sights, and sounds instead of prompting you to hurl your iPhone across the room. The Sensorwake Trio lets you choose from nine scents, five melodies, and a few different dynamic lighting options to get you going in the morning. 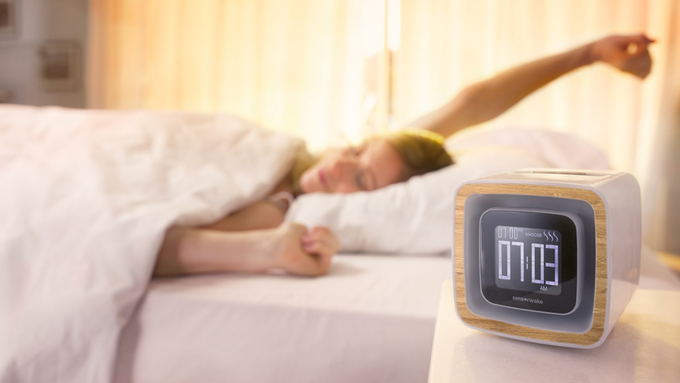 “What if you could wake up happier, more motivated, and ready to take on each day? With Sensorwake Trio, you choose from a wide variety of smells, like coffee, the beach, forest, or peppermint. Change them out as often as you change your mind. Stop hating your alarm clock. Start making your mornings better.” 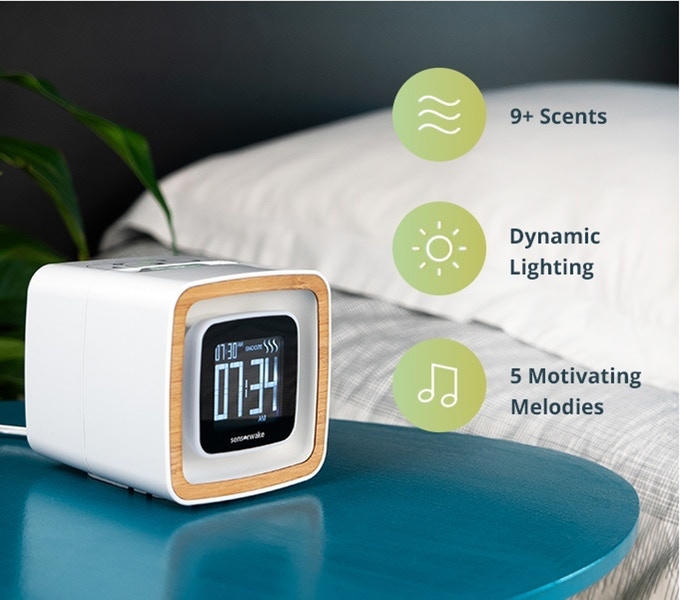 Refined based on early feedback, the second-generation Sensorwake Trio design uses silent, oil-free scent capsules for easy operation. Just plug in the clock, insert a capsule into the port on top, and activate your alarm. The clock employs both cold and dry diffusion to release fragrances at preprogrammed times, and since there’s no heat involved, each capsule can be used up to 30 times. The scent choices include cappuccino, seaside, peppermint, pine forest, orange juice, cookie, tropical fruit, grass meadow, and chocolate factory.

All of the fragrances were designed in France by Givaudan, an international leader in fragrance and flavor creation, and all of them are described in great detail on the Sensorwake Trio Kickstarter page. For example, the “Cookie” scent features top notes of cocoa butter and chocolate chip, middle notes of coconut and nuts, and base notes of caramel and vanilla. Capsules can be purchased on the Sensorwake website when you need to stock up.

One minute after the scent begins to waft over to your sleeping nose, the clock begins to light up, mimicking the effects of sunrise. Then, three minutes into the process, the sound you selected will start to play. These “motivating melodies” are the opposite of the standard alarm clock sounds, aiming for a calm and uplifting vibe rather than a harsh one that shocks you into wakefulness.

“It has cartridges that release different smells… like, ‘Honey, wake up! I just made fresh croissants for you! Just kidding, it’s time for work,’” joked Ellen DeGeneres on her talk show. 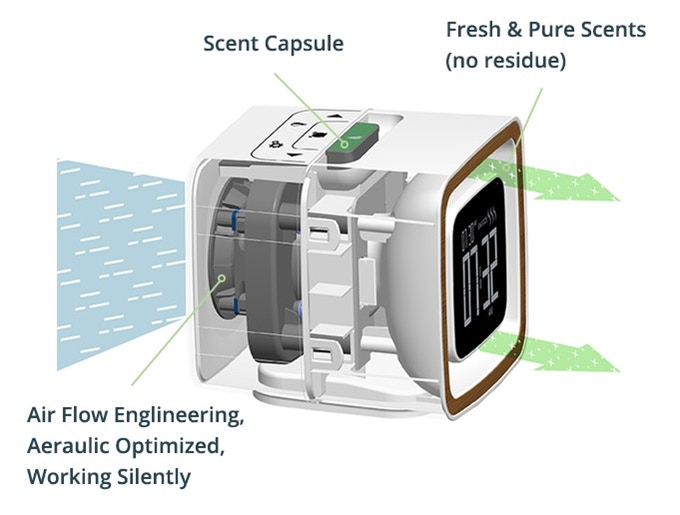 Founder and CEO Guillame Rolland was just 18 years old when Google chose the project he started in a garage as one of its “Top 15 Inventions That Can Change the World” at their annual science fair.

Want to nab one for yourself? The Sensorwake Trio was 100 percent funded on Kickstarter in just three hours. At the time of writing, pre-orders are still available, but if you miss out on backing the project, it’ll likely become available to the public around the same time the Kickstarter rewards start shipping in late 2018.