What have homes looked like in America since the first mass arrivals of European colonists in the 1600s? Every era has its own influences based on global trends, the cultures of people who moved to particular regions, and the current events of the day. Now, American Home Shield (AHS) has visualized ten of the most popular styles we’ve seen over the past 450 years of American history. A series of renderings transforms the same home again and again, from the simplicity of early colonial designs to the artsy influences of Modernism. 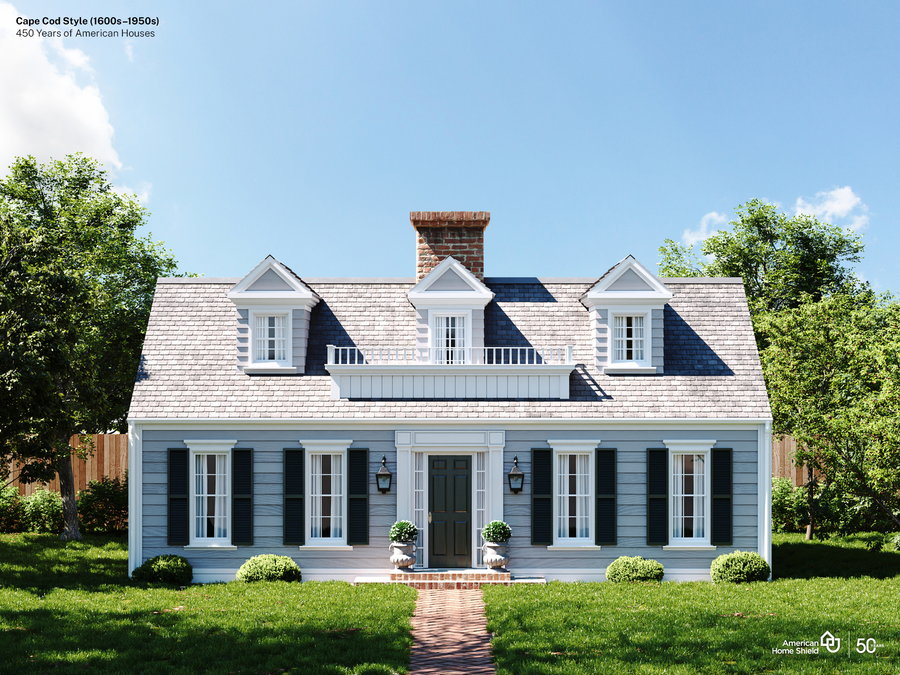 As the name suggests, Cape Cod style originated in the Massachusetts colony, and its particularities revolve around the harsh New England coastal climate. It’s known for a steep roof that easily sheds rain and snow, a central chimney serving a large hearth that warmed the whole house, and a rectangular shape, with cedar shingles on the exterior. It fell out of favor by the 1800s, so most of the original Cape Cod homes were renovated beyond recognition or demolished long ago. What we see today is mostly the product of a Cape Cod revival that started in the 1920s and exploded just after World War II. 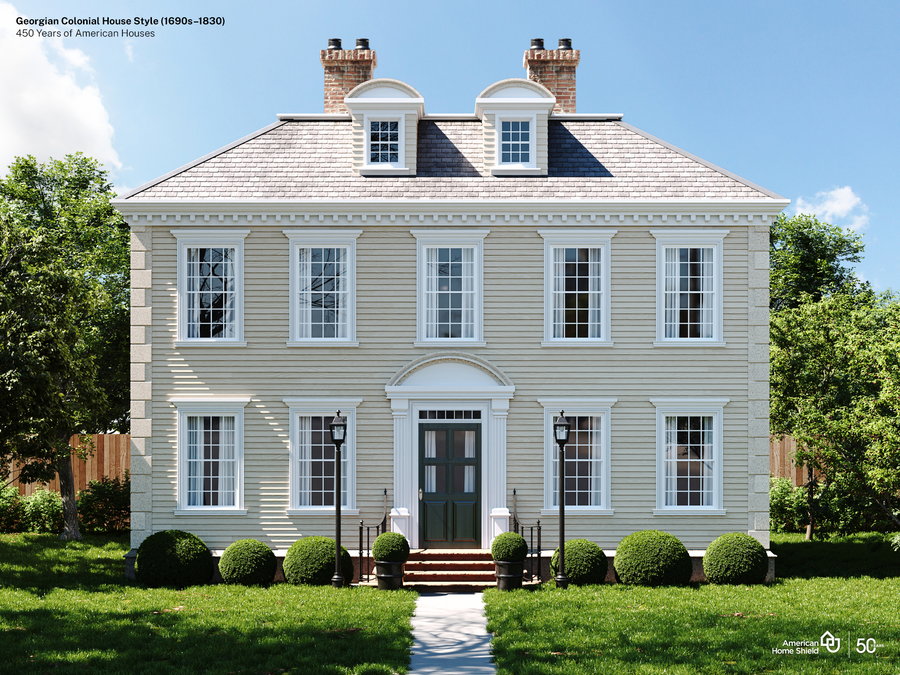 One of America’s most consistently popular styles, Georgian Colonial spread across the entire country. It’s admired for its classic proportions, symmetrical design, and a lack of unnecessary ornamentation. Clean lines and shapes provide most of the appeal, with just a few flourishes here and there around the windows, doors, and fireplaces. They were mostly modeled after English estates with influences from classic Greek and Renaissance Italian architecture, and typically feature paired chimneys and windows in rows of five. 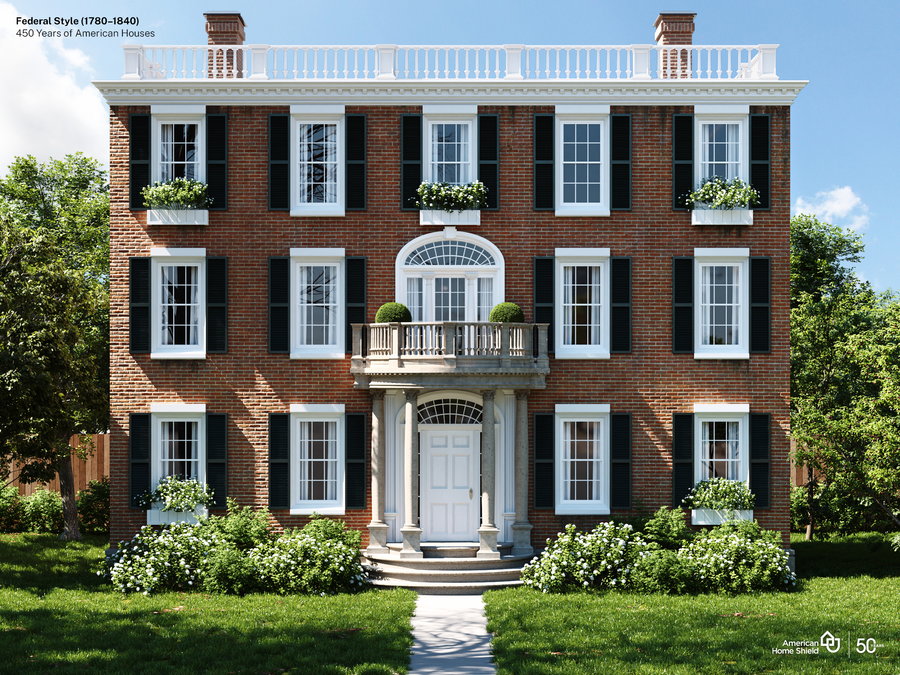 Born in the wake of America’s independence in 1776, Federal style reflects a desire at the time to shrug off European and British influences in favor of a uniquely American aesthetic. Some iconic examples include Thomas Jefferson’s Monticello estate, the White House, and other government buildings built in that era. Just as the country’s leaders looked to Ancient Greece and Rome as models for government, architects chose elements from those historical styles as Federal influences, as seen in the columns and colonnades. 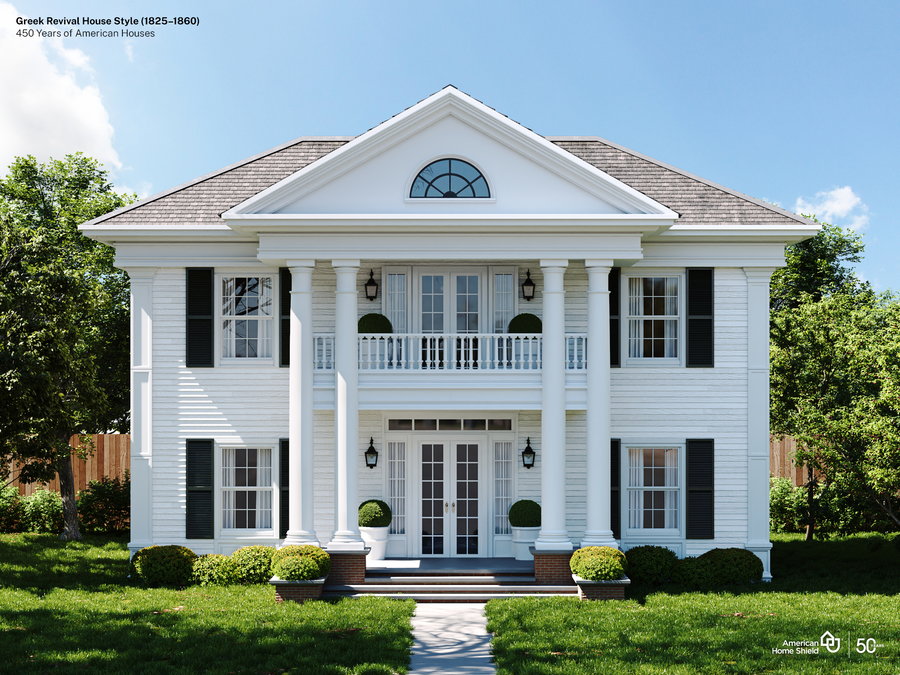 The fascination with Greek culture continued into the 19th century with the Greek Revival style, which we can clearly see in the designs of plantations in the South, state capitol buildings, churches, and urban row houses built at the time. Colossal Greek temple-style fronts with Doric, Ionic, and Corinthian columns and details make these houses easy to identify. 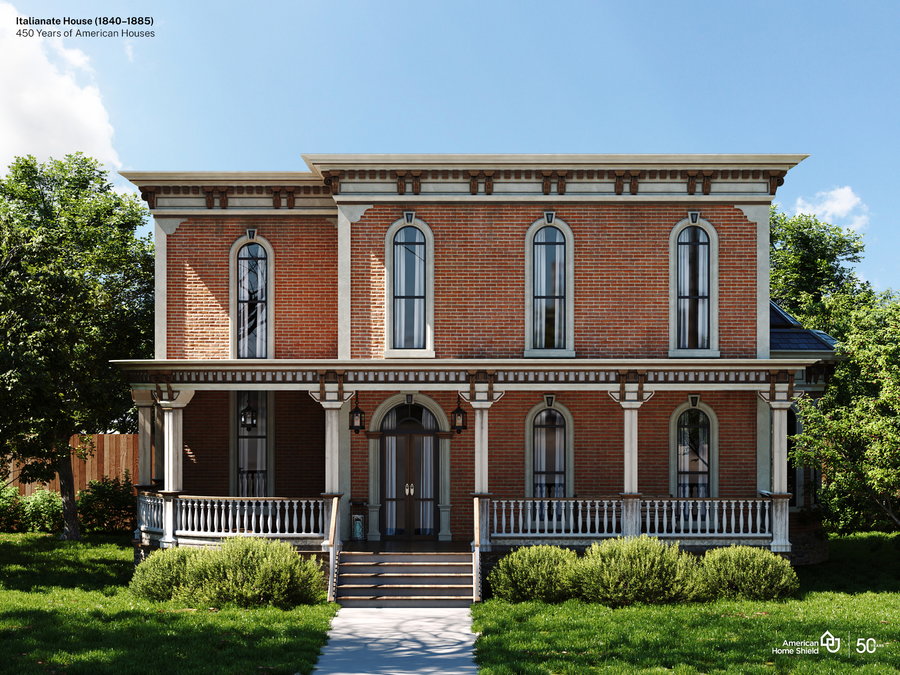 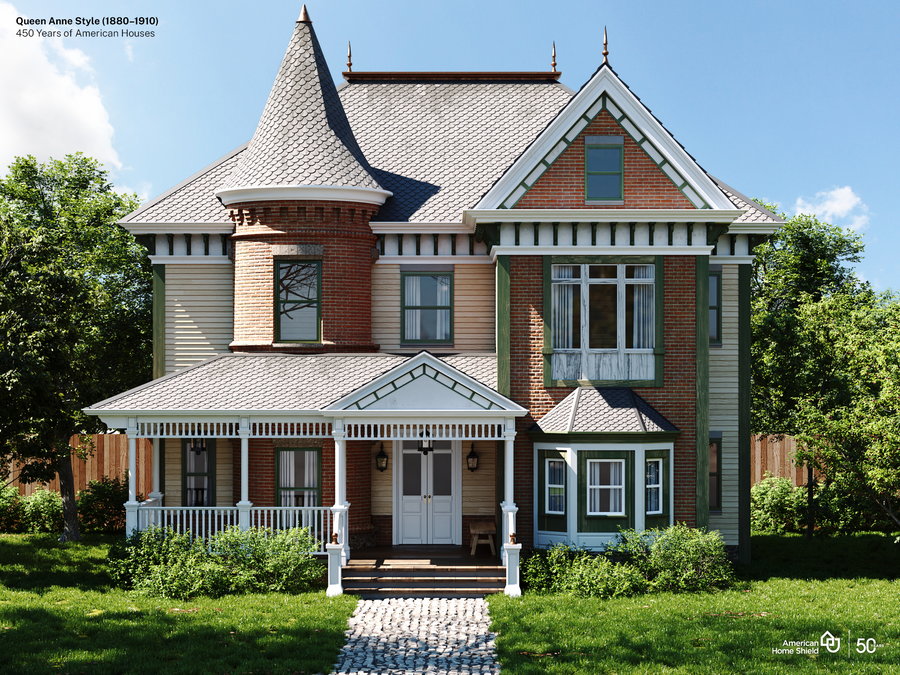 British influences came barging back into the country during the Victorian era, when Americans just couldn’t resist the ornate stylings of Queen Anne architecture. And who could blame them? Drawing from upper class and royal British style, what we commonly call “Victorian” architecture today is known for its turrets, gingerbread trim, complex interior layouts, steep roofs, bay windows, and decorative flair inserted at every opportunity. 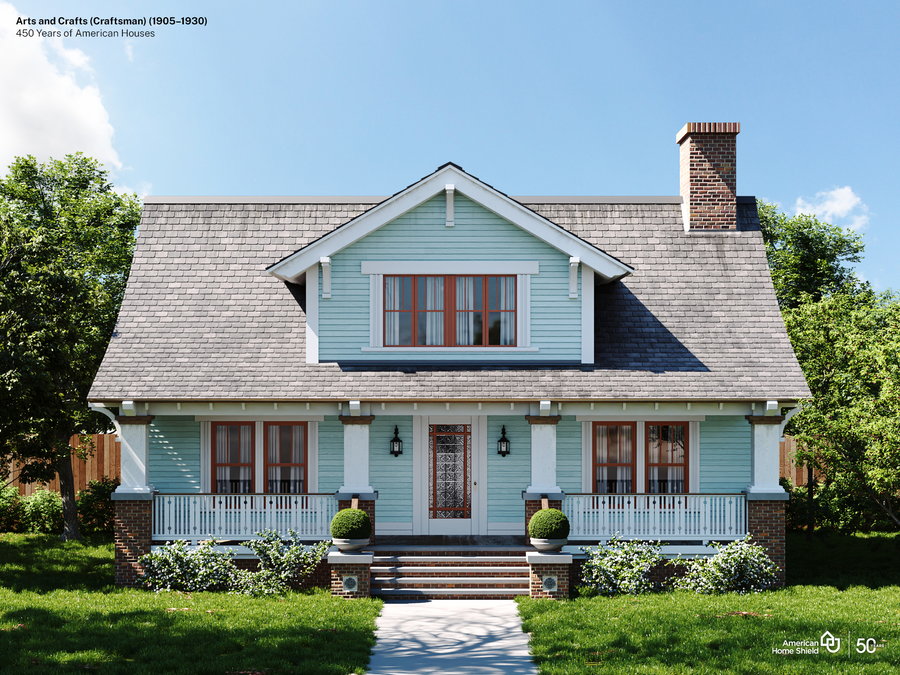 Often referred to simply as “Craftsman,” this style arrived along with a wider cultural backlash to the Industrial Revolution, as people began to prefer handcrafted elements in favor of anything mass-produced. Inspired by the Arts and Crafts movement, which also included decorative arts, interior design, and landscape design, it was widely used to create bungalow-style homes from local natural materials. The over-decorated look of the Victorians was out and simplicity was in, and houses in this style featured thick square columns, overhanging eaves, and low-pitched roofs. 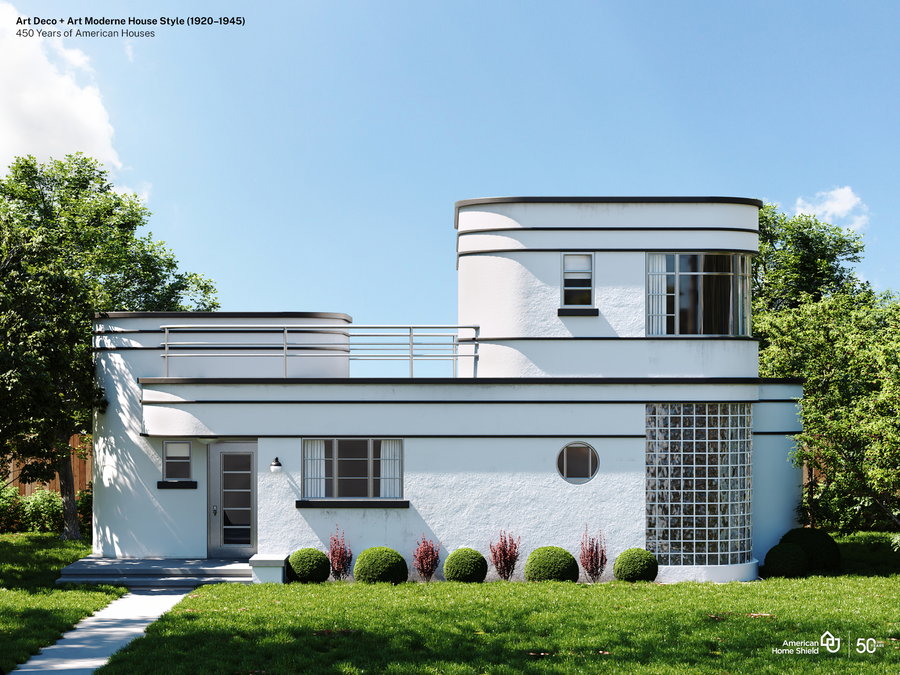 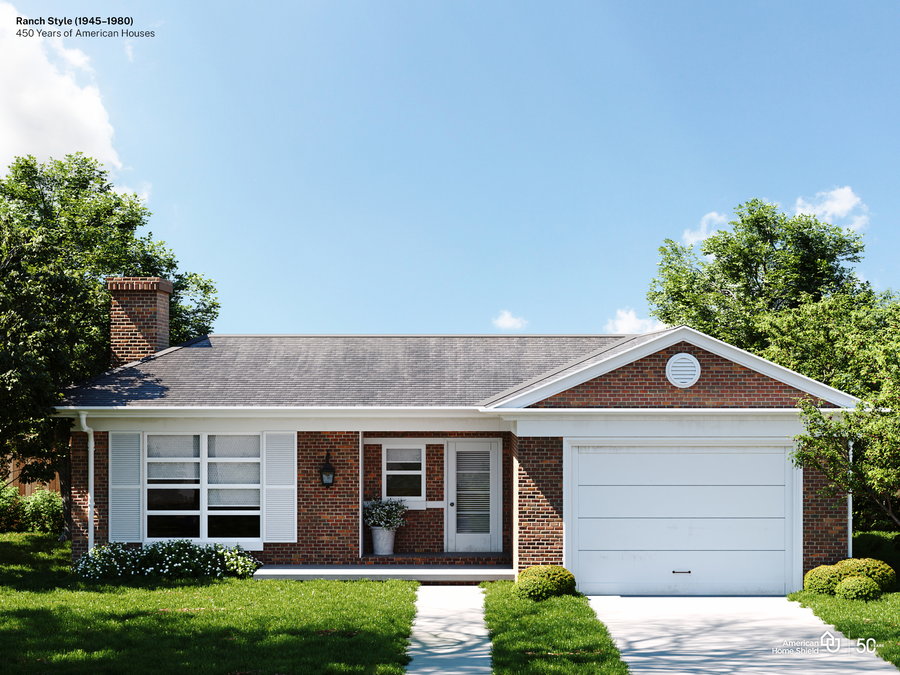 Apparently, Americans like their homes the way they like their salad dressing. Ranch is one of the nation’s most enduring and popular styles, partially because its simple single-story designs were so cheap and easy to build. Ranch houses typically have large open spaces inside, with galley kitchens, low-pitched gable roofs, brick exteriors, and large double-hung windows. 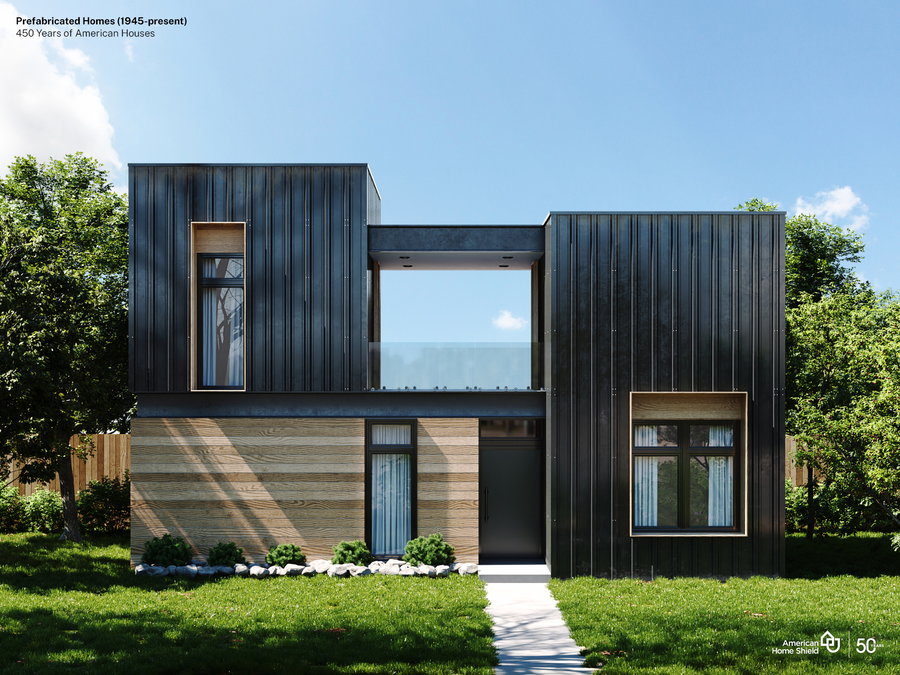 Often called the architectural style of the future, prefabricated homes revolutionize the construction process by building most components offsite in a factory. That means homes can be built faster and with less noise, waste, and impact on the building site, often using modular components. That modularity makes it easy to create stacked configurations in clean, simple shapes, typically clad in low-cost and durable exterior materials like corrugated aluminum.