Artists frequently mix medias — some discreetly, some overtly — with varied success. Hamed Abdalla (1917-1985), a trailblazer in Egyptian and Arab modernism, took his artistic focus one step further with his expansion into what he labeled the “Creative Word.” The result was a series of written words expressed in paint, combining abstract concepts and human forms to bring radically different cultures, religions, and philosophies together on canvas. 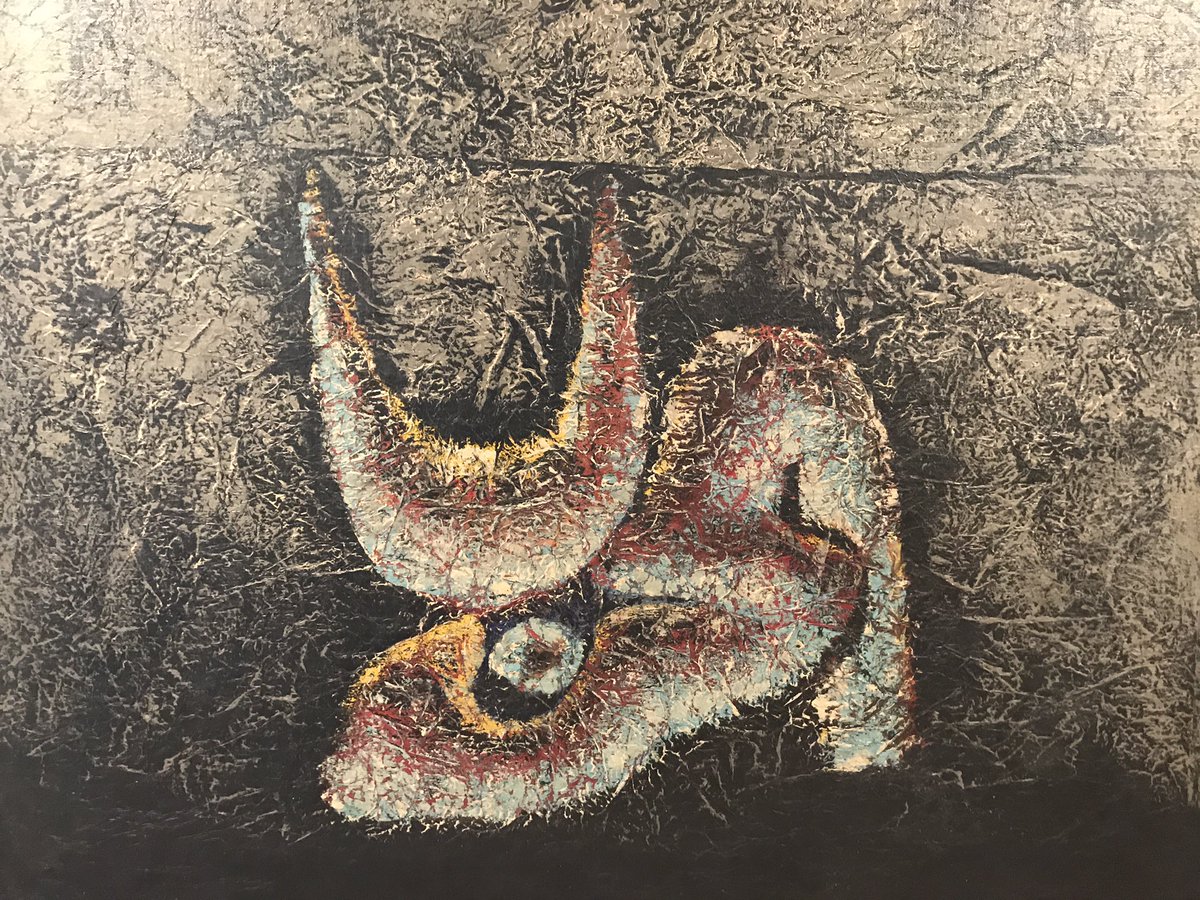 Continue reading below
Our Featured Videos
Abdalla was a self-taught artist who gained recognition early in his life. At age 24, he unveiled his first solo exhibition of Egyptian modernism. After successfully showing his work all over Egypt, Abdalla was honored with a 1949 solo show at the Museum of Modern Egyptian Art in Cairo. Over the next decade, he would put on exhibitions all throughout the UK, Asia, Europe, and the United States, at one point participating in a group installation at New York’s Metropolitan Museum of Art. 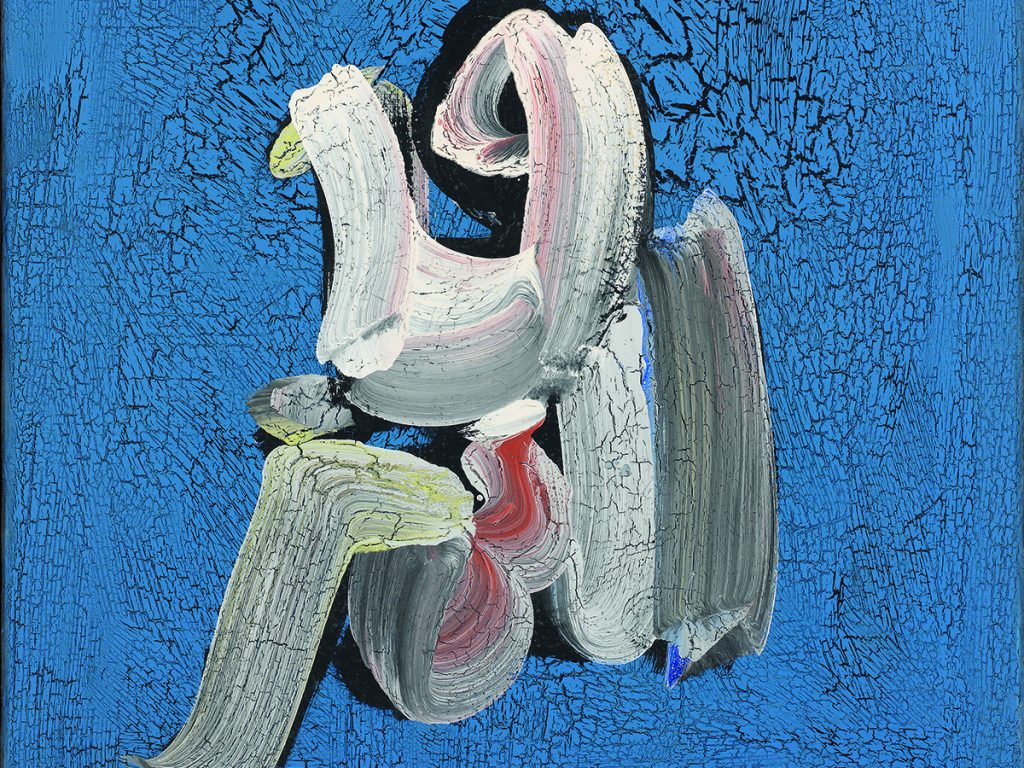 The same year as Abdalla’s Met exhibit (1956), Egypt’s politics were in upheaval, forcing the artist to relocate to Copenhagen. He continued to paint and put on both group and solo shows everywhere, from the Middle East and North Africa to Damascus, Beirut, Palestine, Paris, and Tunis. Shortly thereafter, he would move to France — but it was his introduction to artists involved in Copenhagen’s Cobra movement that most inspired his syncretic pieces.

From April through June 2018, the Mosaic Rooms, an exhibition and research hub in London devoted to Middle Eastern visual culture, featured Abdalla’s ARABÉCÉDAIRE. Curated by Morad Montazemi, an art historian and research curator at Tate Modern, the show was the first of a three-part exhibition series called Cosmic Roads: Relocating Modernism, which also included the work of other key modernist artists from Egypt, Iran, and Morocco. 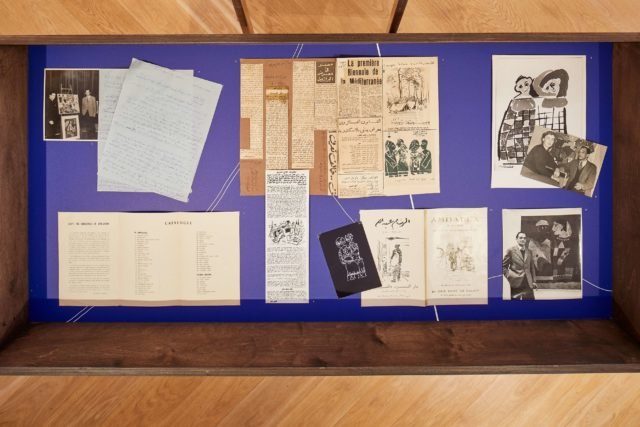 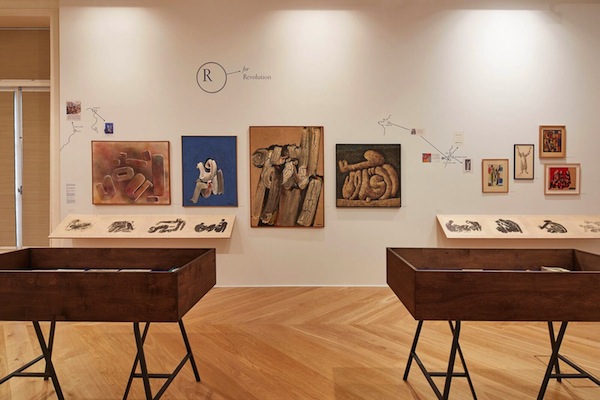 Abdalla named his show ARABÉCÉDAIRE after the French word for a visual alphabet primer commonly used by children when learning to read, “abécédaire’.” He felt the word provided an ideal representation of his “creative word” concept. It focused on six words that were particularly important to him: “Lovers,” “Revolution,” “Nubia,” “Caves,” Lettrism,” and “Klee,” each one of them being used to illustrate how the artist came to develop his distinctive visual language and political ideas through formerly unobserved materials and documents.

Each word Abdalla chose for ARABÉCÉDAIRE was integral to his life as both a man and an artist — two roles that were entwined like the roots of a bramble bush.

Abdalla made many paintings during his life of lovers and the word “desire.” These were inspired by his two grand loves: Tahia Halim, a popular Egyptian artist, and Dane Kirsten Blach, the mother of his children.

Constantly in close proximity to political upheaval and war, Abdalla strove to access a “third space” in his work that would give a fresh voice to desperate and exploited people all around the world.

The villages and countrysides of the Nubian region greatly inspired Abdalla’s artistic vision. They made him feel secure as a child and fueled his creativity when he first left his homeland. 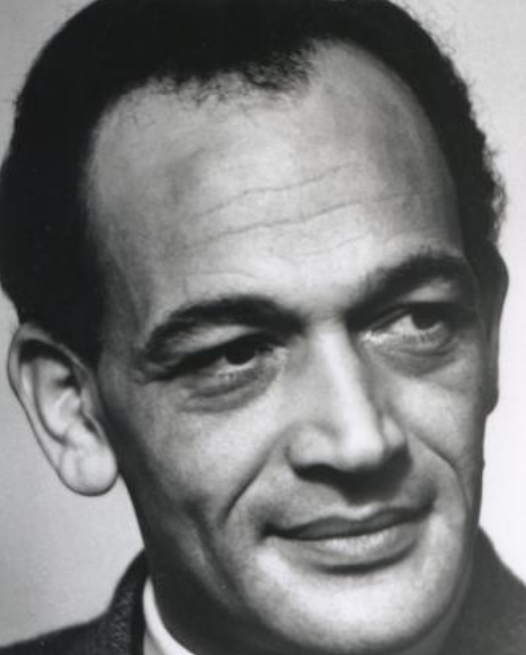 Abdalla often spoke of his lifelong fascination with ancient caves and other wonders of natural history. He also used caves as symbols of refuge for those in exile.

Prior to becoming a visual artist, Abdalla trained as a calligrapher. He investigated the origins and role of writing in all its forms.

Abdalla’s fascination with western artists and European modernists really comes through in his depictions of his cultural roots. He was especially intrigued by Swiss German artist Paul Klee, and, even more particularly, by his painting Soil Consciousness.