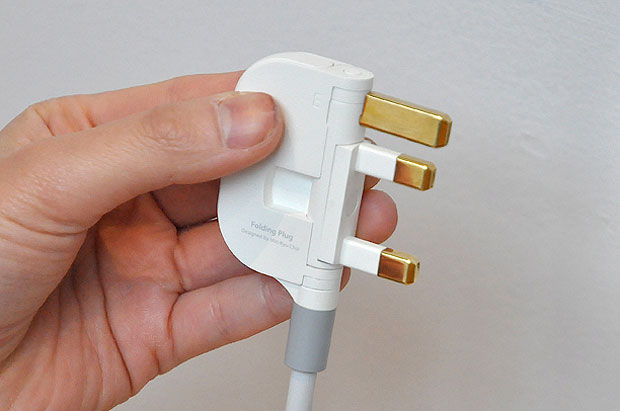 Sometimes, companies spend fortunes on industrial design teams for decades only to be outdone by a simple student project like this one: a flat fold-out version of the traditional three-prong power cord as thin and mobile as the Apple MacBook Air.

In the United States we are familiar with the slightly-fattening third prong but in the United Kingdom the typical cord tip is even bigger, turning electrical cord ends into something that looks downright archaic next to our streamlined and thin modern gadgetry.

Better yet, the design idea by Royal College of Art student Min Kyu Choi does not stop with a single cord – multi-plug cords were naturally factored into the mix as well. These ingenious extensions do not even require the simple 90-degree spin to fold out into full shape and thus save even more space despite being perfectly compatible with standard sockets.

It seems too simple to be so easily possible, but that is often how the biggest leaps in functional design come about – from people you have never heard of and when everyone else assumes all possibilities have been tried and tested.

Now in production, the folding plug is known as the MU.

“MU products provide a charging range of USB wall archers for charging all tablets, smartphones and smaller electronic devices. Utilizing the broad patent portfolio form parent company Made in Mind, the MU charger range reduces the overall size of the UK three-pin plug by over 7-% to just 14mm thin. No longer a single country solution for the UK, now the MU is on the global stage. With patented configurable plug heads and a range of power blocks, trail with your MU anywhere.”

“For high-quality performance, the Mu British charger has an embedded auto-detect chip enabling the Mu to identify the device being connected and, in turn, deliver the device-optimum charge.”

The 45-watt MU plug device supports USB power delivery with a maximum voltage of 20V at just 14mm thick, making it the world’s thinnest charger of its kind. The range includes a fully foldable UK plug, hinged European plug and low profile US plug. Its starting weight is just 80 grams, making it an incredibly lightweight solution as well.