Smart devices are everywhere nowadays, but when it comes to security, many still prefer the simple reliability of a mechanical device that can’t be tinkered with. However, Dog & Bone has decided to tackle an old staple: the common padlock. It’s a straightforward design that hasn’t been significantly altered since the 1800s, and while Dog & Bone’s version looks mostly the same on the outside, everything else is fine-tuned for life in the modern age. We decided to take a look at their LockSmart line to see if this innovative lock was something worth trading up for. 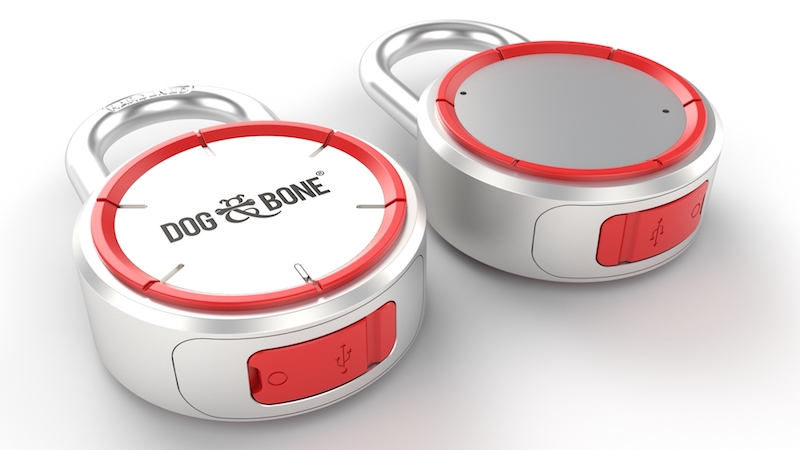 We received an original LockSmart padlock and a slimmer blue LockSmart Mini to try out. Both had a very modern and sleek look with one interesting feature: no key hole. Many smart devices we’ve tried in the past have come with a contingency plan just in case the power goes out or a battery is running low. These locks, however, are supposed to last for two years in their default power modes and will ping your phone if their power starts to drain. While we weren’t able to test the full timetable for this, we tested them during three months of regular use and only saw the reported battery power drop six percent. 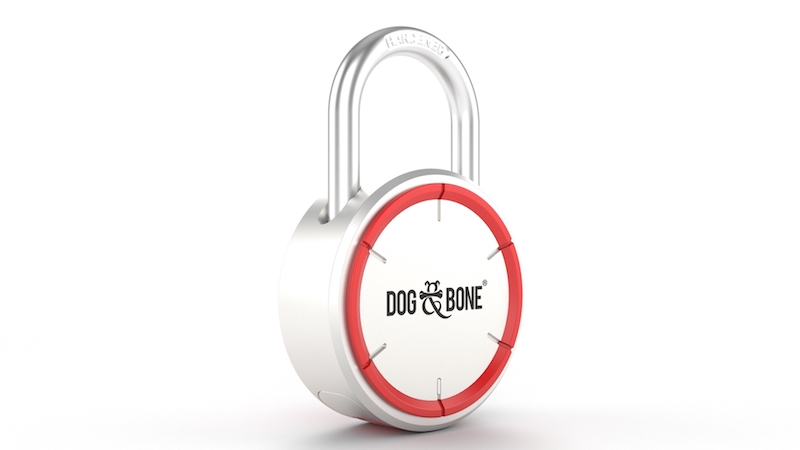 The original LockSmart is a weighty, sturdy lock. It boasts an 8mm-stainless steel shackle and a die-cast Zamak-3 zinc alloy body. This solid design gives the lock a high tensile and impact strength that won’t break easily. However, the red silicon ring around the front and back keep this tough lock from scuffing your surfaces. Since it doesn’t need to be charged very often, the USB recharge port next to the power button on the bottom has been capped with a silicon seal. It’s also completely weatherproof and has been tested in rain, hail, snow, and heat from -4 to 158 degrees Fahrenheit.

The lock weighs about 13 ounces, which is quite heavy but can be attributed to the high-quality materials used to make it and the parts it requires for digital functionality. 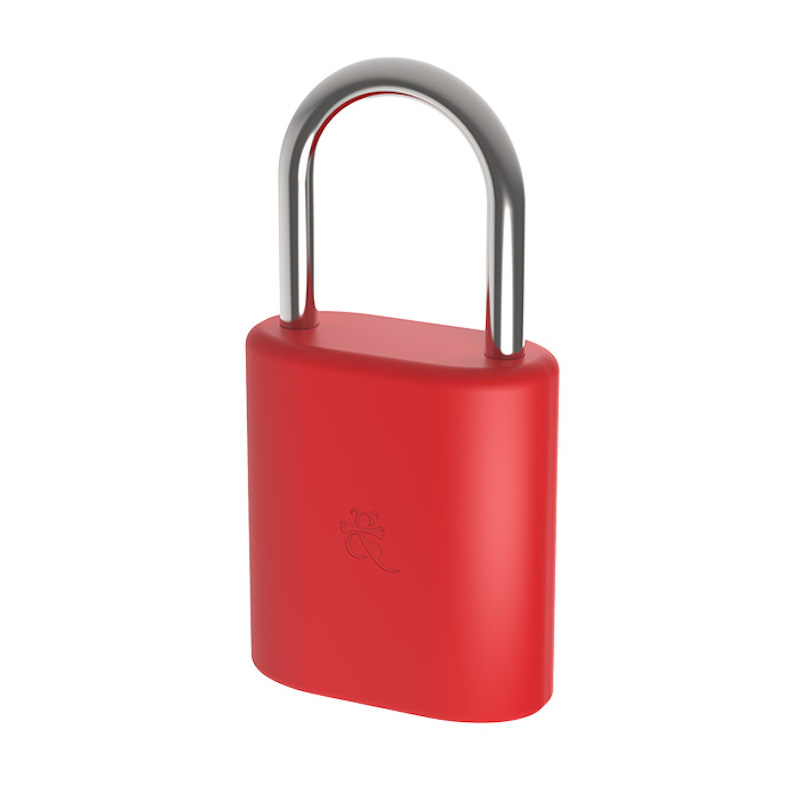 This lock was perfect for quick security needs, like locking luggage or a locker. Its design is much slimmer than that of the original and is made from lighter materials. While the lock’s mechanical hardware has been downgraded, it’s still a tough construction: the Mini features a hardened steel shackle and a die-cast alloy body.

The entire exterior has a silicon cover, and while ours came in a nice light blue, the cover also comes in black and red. This lock definitely gives off a casual vibe while maintaining the high standards of its bigger cousin. 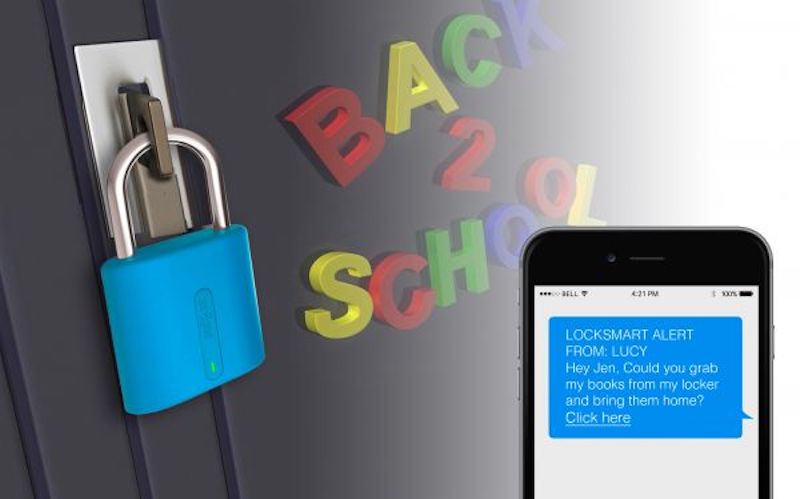 As this is a smart device, there is the danger of cyber-attacks to your lock, and we were impressed with Dog & Bone’s precautionary measures to keep your belongings safe. Every lock features 128-bit advanced encryption and a 256-bit cloud generated private key.

To actually access the lock, users go through their LockSmart app. Set up was simple for us and the locks were connected to our phones within a couple of minutes. The app has a very intuitive layout, and each lock can be personalized with images and names so you know exactly which one you’re controlling if you own more than one. We were also immediately prompted to update the lock’s firmware, which is a good indicator that the company continues to support and improve its products long after we purchase them.

As we were testing on an iPhone, we were given three options to unlock the device: tap to unlock, passcode, and through our phone’s Touch ID function. The app also features a map so you can track your lock’s location, and it will notify you if the lock is ever moved (perfect for catching a bike thief).Hands down the best feature for this lock is something you can’t easily do with 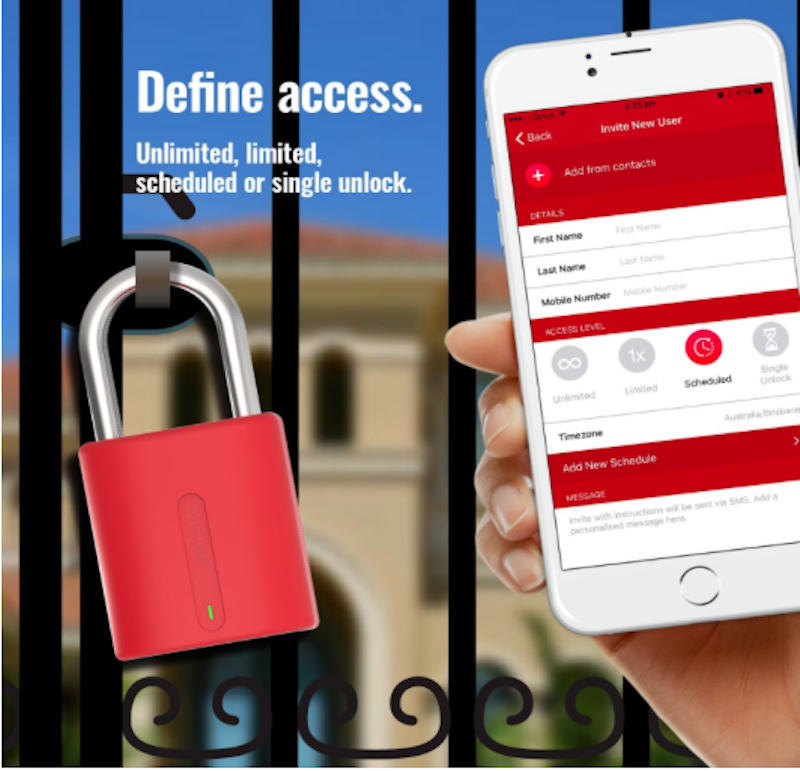 Hands down the best feature for this lock is something you can’t easily do with your everyday mechanical padlock: share access. Without needing to hand over a physical key, the app allows you to invite users through your phone contacts. You can give anyone unlimited access, restrict them to a certain schedule (like if you have gardeners or a pet walker that needs access), or assign a limited amount of unlocks. It was easy to share; once we sent an invite, the new user received a text message prompting them to download the app and join our lock. Every time they accessed the device, we were given a push notification and it was recorded on the lock’s activity page.

Unfortunately, we did encounter one issue when we were testing the share access feature. If one person was connected to the lock on their phone, everyone else would be denied access and couldn’t take over control. It’s not unusual to deny two users access to a device at the same time, but the language in the app confused us at first. It stated we weren’t connected and suggested turning the lock on, which wasn’t the issue. Not a deal breaker, but good to know if the situation ever arises again.

Actually opening the lock was pretty fun. Once we touched our Touch ID sensor, the lock sprang open so fast it startled us. The shackle moved very precisely, jolting open just enough so we could remove the lock, but not enough that the device falls off whatever it’s attached to. The shackle fits perfectly into the main body, a secure fit with none of the jiggling you might be used to from cheaper products. 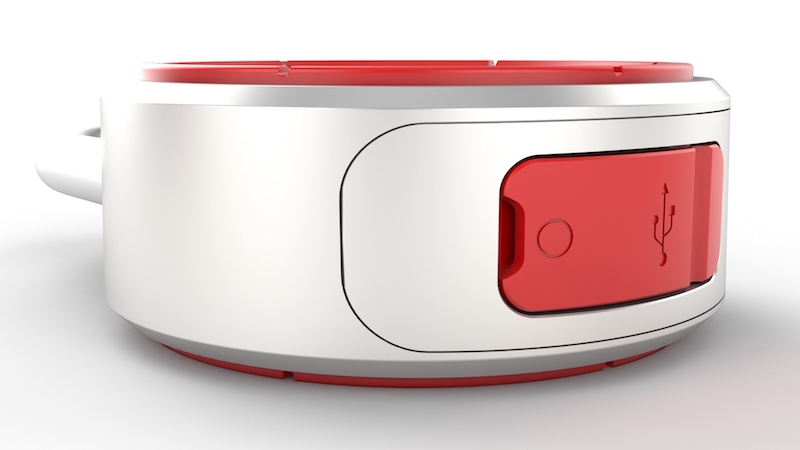 Both locks worked amazingly. They were highly responsive and unlocked instantly when prompted. A lot of smart devices eventually become troublesome to use and therefore not much more convenient than their ”dumb” counterparts. However, we were pleasantly surprised with how quick and easy it was to unlock this padlock, and how we were even able to unlock it in about the same amount of time as a traditional padlock. We were also impressed with how clean, stylish, and user-friendly the app was. It stood out in all the right ways and made personalizing our lock set a fun experience.

The locks are priced higher than the quick-fix padlock you’d find at a convenience store, but when compared to ones of equal strength we saw no significant price difference (at the time of writing). Currently, their website prices the original LockSmart at $90 while the Mini is $70, but prices varied on other stores we checked. 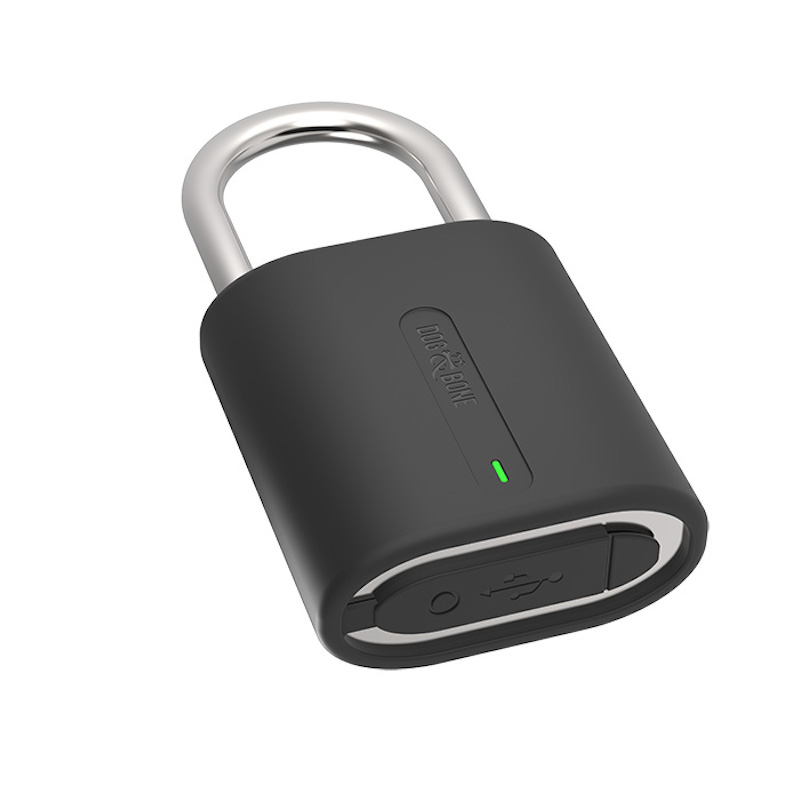 The Dog & Bone LockSmart series is a great way to swap some of your practical items out for their smart tech counterparts. The lock’s features were useful, the company clearly paid attention to the strength of its physical design, and it was super easy to operate.