What began as a fun illustration that was popular among bicycle-loving math nerds has become a three-dimensional, fully-functional bike shaped like the pi symbol. Malaysian artist Tang Yau Hoong produced “The Picycle” in print form back in 2012, showing the symbol in white set against black bicycle components on a bright background. It was such a natural fit that two other designers got together to make it a reality, and they’ve recently shared both their process and the finished results with the world. 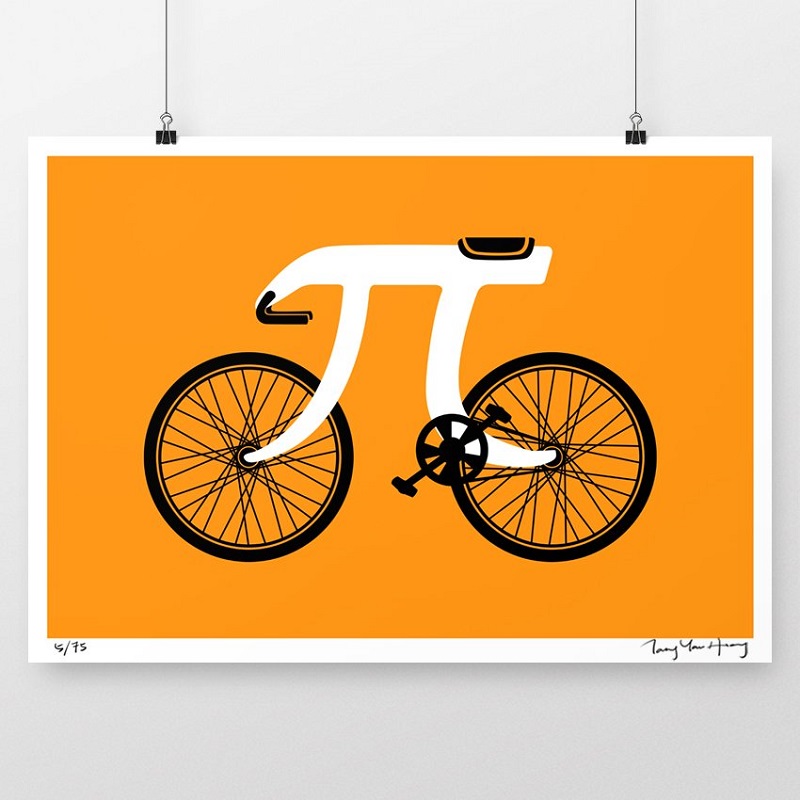 Martin Koomen and Tadas Maksimovas present “Pi Bike,” a surprisingly ergonomic and elegant rendition of its 2D inspiration. They made a few minor alterations to the main form of “The Picycle,” curving the seat upward slightly and making the front arm straight in a shape that also mimics that of a kneeling human body. They even measured the proportions of a standard bicycle to ensure a proper fit. 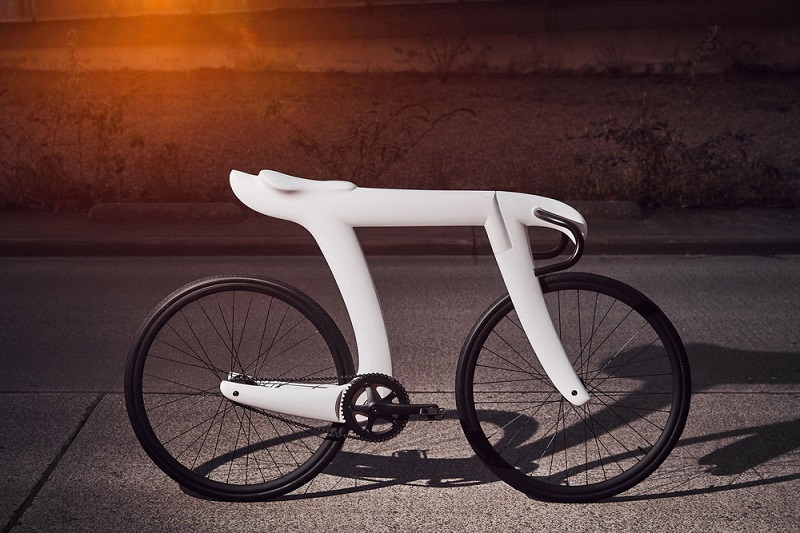 They tweaked, adjusted, and tested the shape using scale models made of cardboard and plywood. Once they determined the right size and shape for the frame, they made silicone molds to cast a prototype frame out of resin. After these resin parts were sanded and assembled, a crank set, racing handlebars, and Hydra fixie wheels were attached, all in a sleek matte black.

“However, that was only half of the work, as new molds had to be made for the final version of the frame, which was cast out of the stronger enforced carbon fiber,” the designers explain. “Then of course the bike had to be assembled again.” 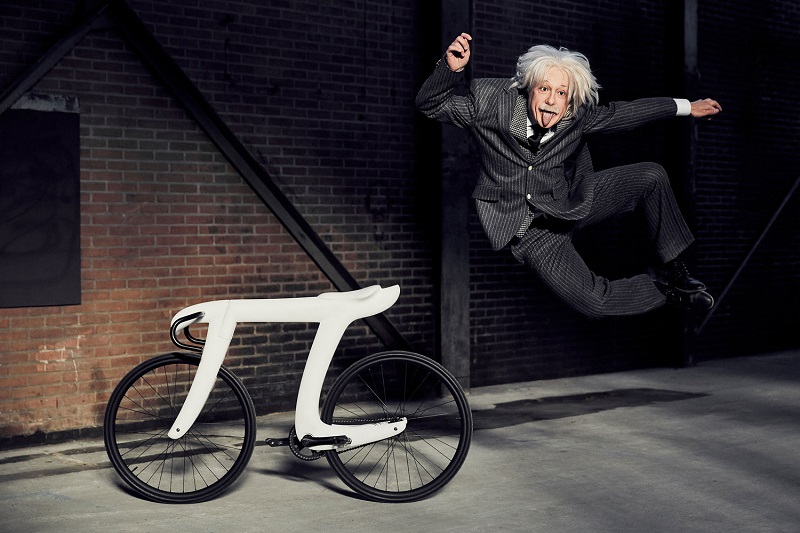 From the first sketch to the final product, it took about a year to complete the project. The designers collaborated with WE ARE Pi, an “independent international ideas company founded in Amsterdam on 14th March 2011[3.14],” and launched the bike a few days before Pi Day 2018. Coincidentally, Pi Day is also Albert Einstein’s birthday, which explains the fun photo shoot theme. 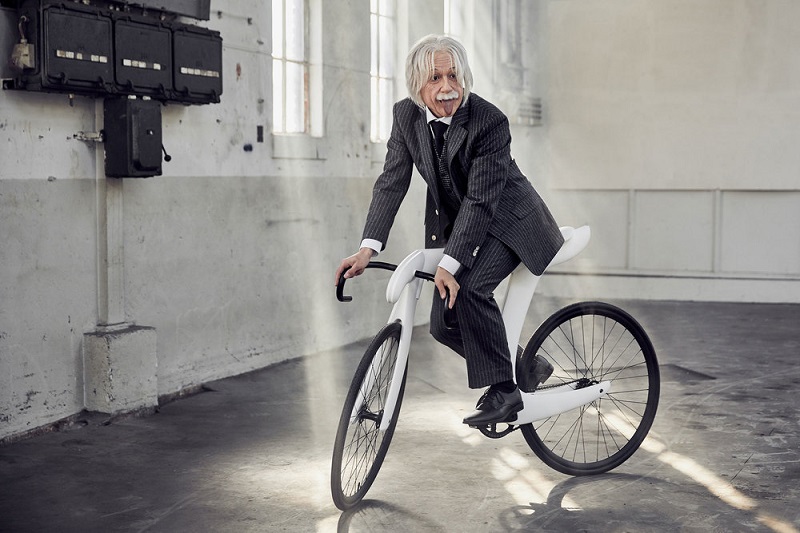 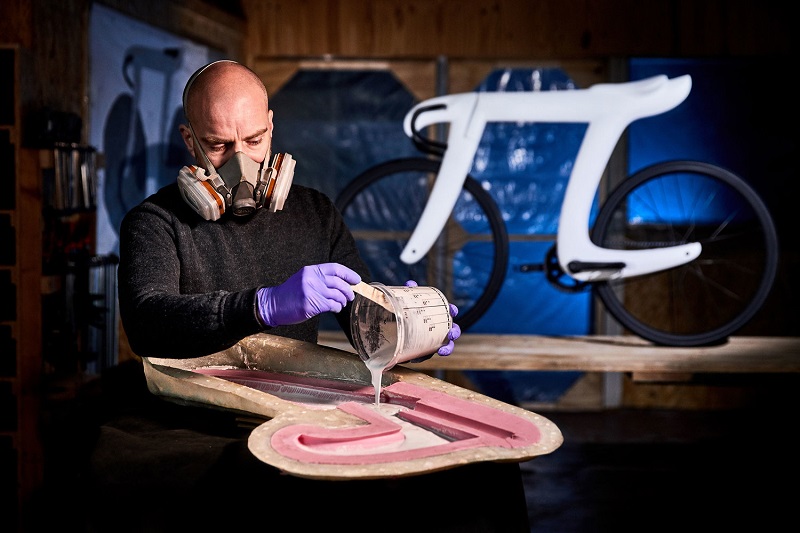 The pi symbol, of course, represents the ratio of a circle’s circumference to its diameter, and it takes its shape from the lowercase Greek letter π, which is also the first letter in the Greek word “perimetros,” meaning circumference. The fun of it is that it’s actually an irrational number, which means that its exact value is unknowable. While it starts with 3.14, the numbers that come after that go on and on for trillions and trillions of digits.

As a matter of fact, computers made to constantly calculate its digits break world records each and every year, revealing a slew of new numbers beyond the end of the last calculation. In November 2016, “pi enthusiast” Peter Trueb’s computer calculated 22,459,157,718,361 verified digits of pi. Imagine how stymied ancient mathematicians were by this problem, certain as they were that in a world created by an omniscient god, nothing could be unknowable. 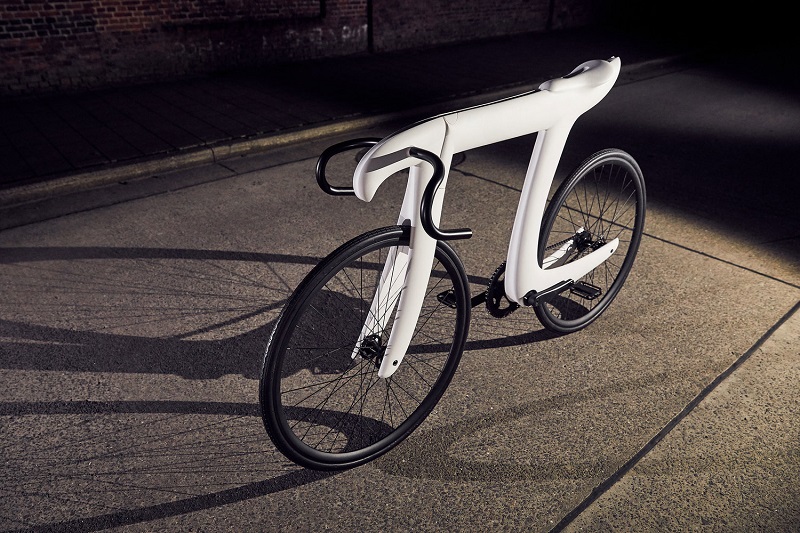 Modern-day math lovers use the pi symbol as a way to broadcast their pride. It shows up on t-shirts, gets tattooed on people’s skin, and serves as the basis of all sorts of other designs, including that of the transforming “Pi Workstation” by designer Joe Manus, who describes the piece as “3.14159 options in one and endlessly cool.”

All photos by Paulius Gvildys