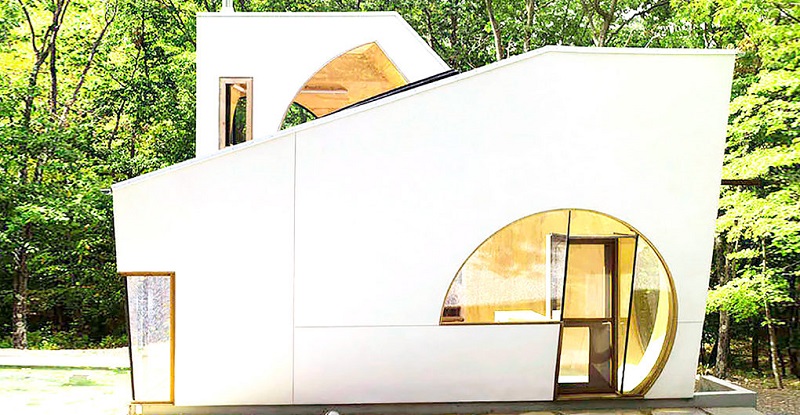 Nestled on 28 acres of forested rock outcropping, the spectacular “Ex of In” House by Steven Holl Architects is a study in contrast that highlights the intersection of organic curvature and straight lines. Built in 2016, this Rhinebeck, New York home’s exterior consists of rigid, white blocks and sharp angles. Inside, the structure softens into spherical voids and soothing wood tones. According to the architect, the house “explores a language of space, aimed at inner spatial energy strongly bound to the ecology of the place – questioning current cliches of architectural language and commercial practice.”

Ex of In’s construction site was originally intended to be divided into five suburban house plots, but Holl saved it from development and decided to place just one home on it. He decided to preserve the forest that took up the remaining space to benefit the local ecosystem and gain some personal peace of mind. The home measures just 918 square feet and acts as an alternative to modernist suburban houses “that sprawl in the landscape.” 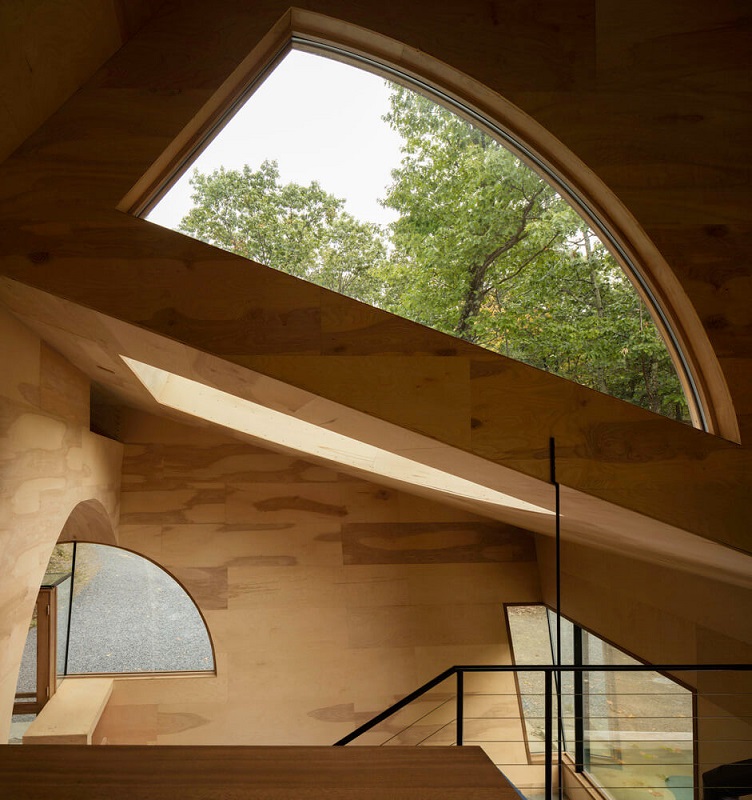 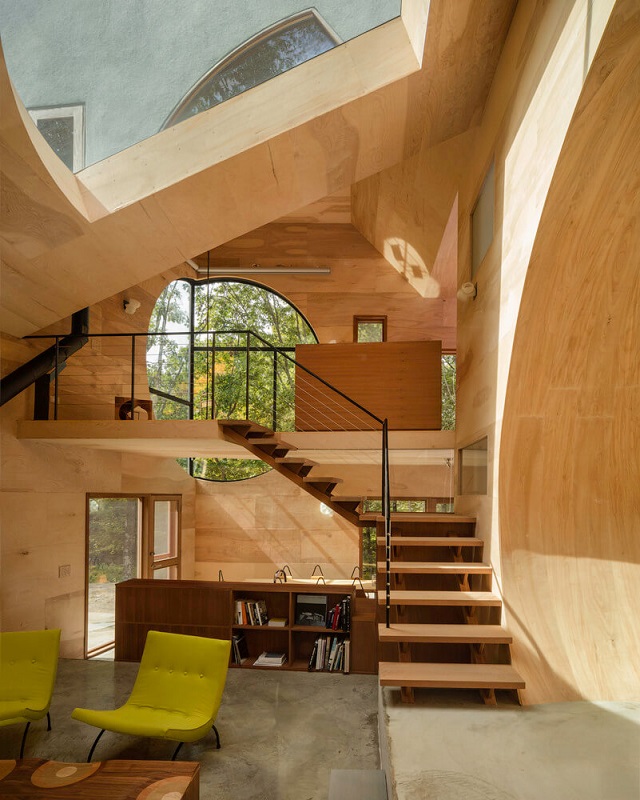 It’s certainly different from the average suburban, or even forest, home. The exterior’s geometric planes are pierced by one circular opening after another, all of which frame pastoral views of the trees for indoor spectators. The house belongs to Steven Holl himself, who built it to be an artist’s residence, guest house, and architectural experiment all in one. When designing the building, Holl adhered to a strict seven-point manifesto: “1 – to study architecture freed from the purely objective; 2 – from origins of architecture we explore ‘in;’ 3 – ‘in:’ all space is sacred space; 4 – the architecture of ‘in’ dominates space via space; 5 – intrinsic ‘in’ is an elemental force of sensual beauty; 6 – ‘in’ is useless, but in the future will be used. purpose finds ‘in.’ 7 – the thing containing is not the thing contained.”

In keeping with these explorative themes, Holl used an abstracted view of the earth itself as the Ex of In House’s starting point. While it’s no longer evident now that the house is complete, its structural basis consists of three interlocking spheres that have been respectively aligned to face the rising sun in the east, the Hudson River, and the sky directly overhead. 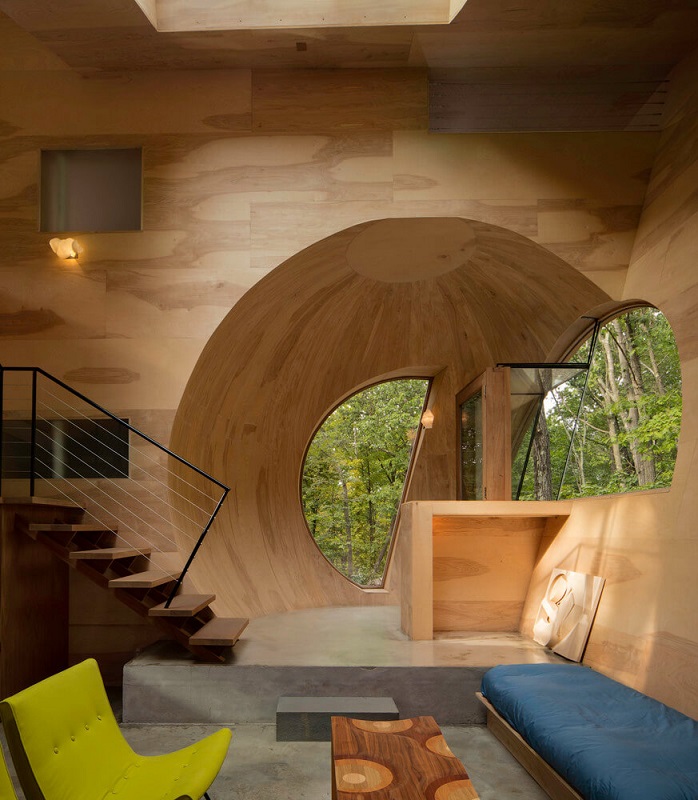 Inside, spherical impressions have been cut into the home’s wooden walls. They contain built-in benches and half-circle windows that peer out into the surrounding forest. One particularly eye-catching glass circle folds across two walls and continues onto the floor for a sort of flattened fishbowl effect. Residents can lounge in this transparent area to feel like they’re in the middle of the woods from the comfort and safety of the indoors. The home has no official bedrooms but is capable of comfortably sleeping five people. 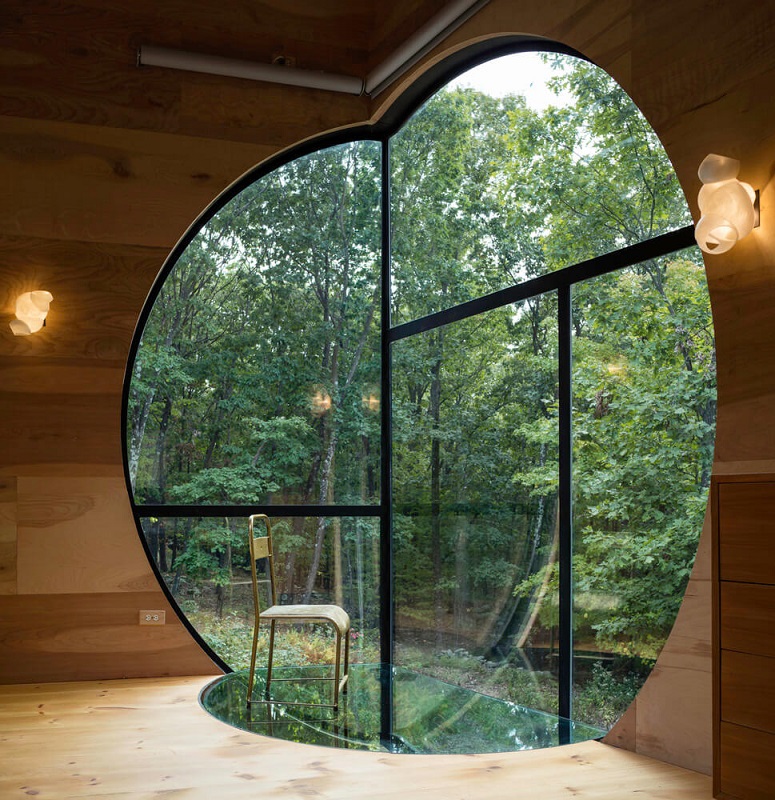 The house is made primarily from recycled materials and gets its energy from a geothermal heating system and a set of roof-mounted solar panels. Every lighting fixture is the house is also environmentally-friendly, having been 3-D printed from a cornstarch-based bioplastic. The Ex of In House’s sustainable features actually generate more energy than the home requires. Subsequently, Holl is able to send any excess electricity back to the grid.