Reduce, Reuse, Recycle…and Repurpose? The fourth “R” in this familiar slogan has been popping up more and more in the design sphere over the last few years, as everyone from large brands like IKEA to world-renowned architecture firms aim to integrate more mindful repurposing into their work. 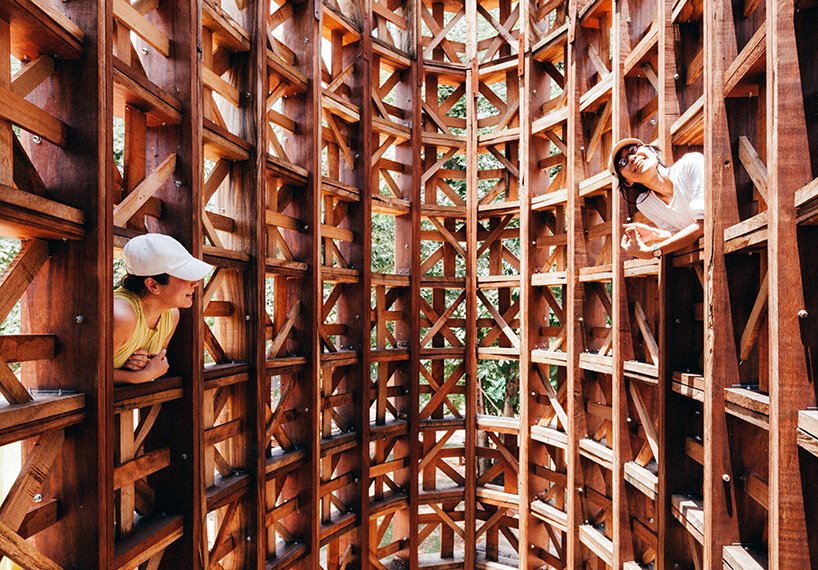 With a mind toward producing less waste while also creating new, useful, and beautiful things, repurposing has become an important part of how those in both fashion and design have come to reevaluate their respective industries.

Awards like the Design Prize recognize such efforts through their “Social Impact” category. Since 2017, this annual award has helped shine a spotlight on extraordinary design achievements that make an impact through thoughtful and eco-conscious projects.

This year, the Design Prize 2021 for social impact was awarded to Bangkok Project Studio, a Thailand-based firm led by Boonserm Premthada. Primarily based in Thailand, Bangkok Project Studio is known for their outstanding nuanced designs that often underscore the importance of nature. Past projects include an elephant museum made of upcycled bricks (themselves created from elephant dung), “The Walk,” an elevated walkway meant to highlight the importance of the often-overlooked natural world beneath our feet, and an observation tower at “Elephant World” in Thailand. 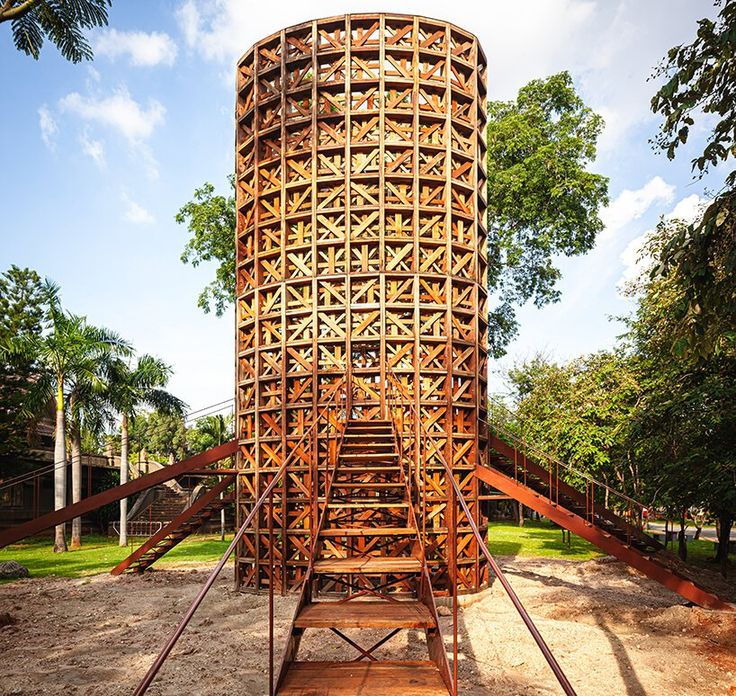 The latest project, and the winner of this year’s social impact Design Prize, is yet another feather in the cap of the Thai firm, this one in the form of a nine-meter rice tower. While this in itself may not sound very exciting, there are several things about the project that stand out and make it award-worthy. Located in a zoo in the country’s northeastern city of Nakhon Ratchasima, the imposing nine-meter tall rice tower was constructed through the intentional repurposing of five timber barns that were set to be demolished. The firm, led by Premthada, took apart the existing barns and reassembled them into something new, with an “[aim to] give new architectural language to the word ‘barn’ or ‘rice storage’ commonly found and used after the harvest season,” according to designboom. 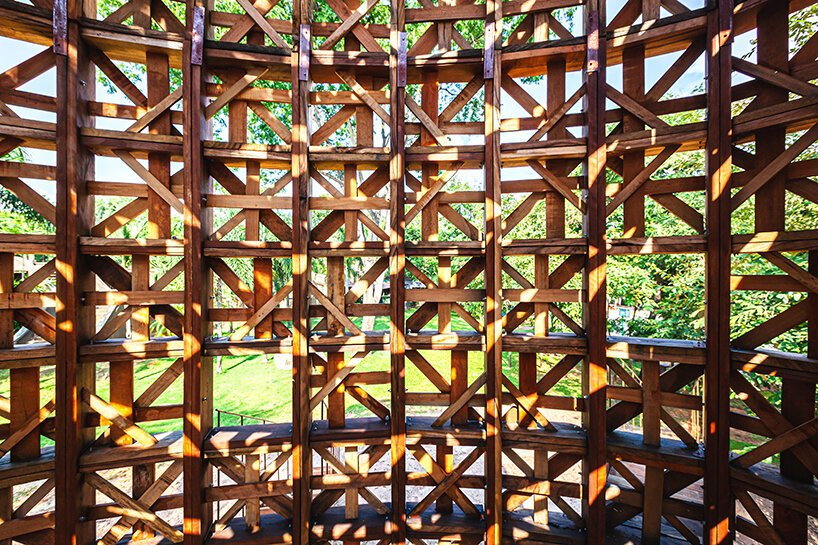 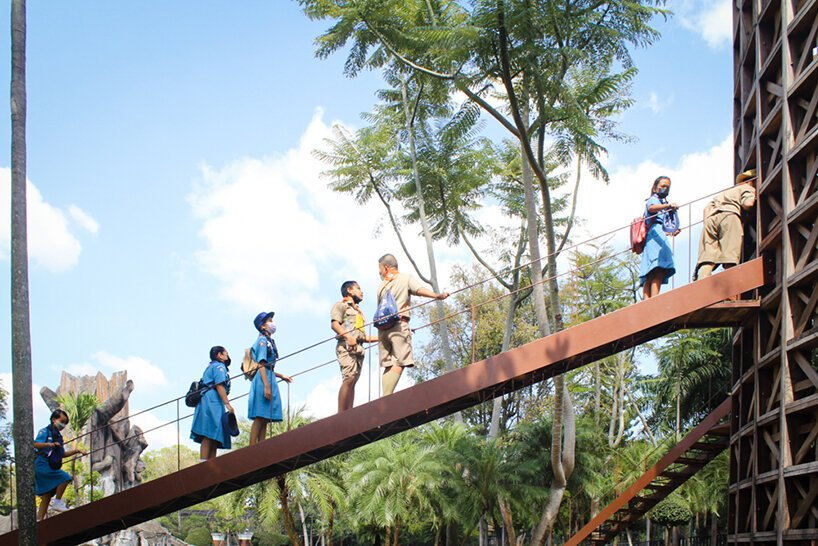 This rethinking and reimagining of existing structures or objects has always been an important consideration for the firm, who often aims to merge their structures with their natural surroundings and connect them in some way. Here, the rice tower was created using the wood from the deserted barns, maintaining the overall essence of the their original purpose. Rising up from the ground in a new and exciting form “connecting the ground and the sky,” the tower is a testament to the importance of rice in Thailand, specifically in this northeastern region, which produces the best quality rice in the largest quantities. The repurposed wooden spire is also a monument to rice farmers, who nurture, grow, and harvest the crop while acting as its caregivers. 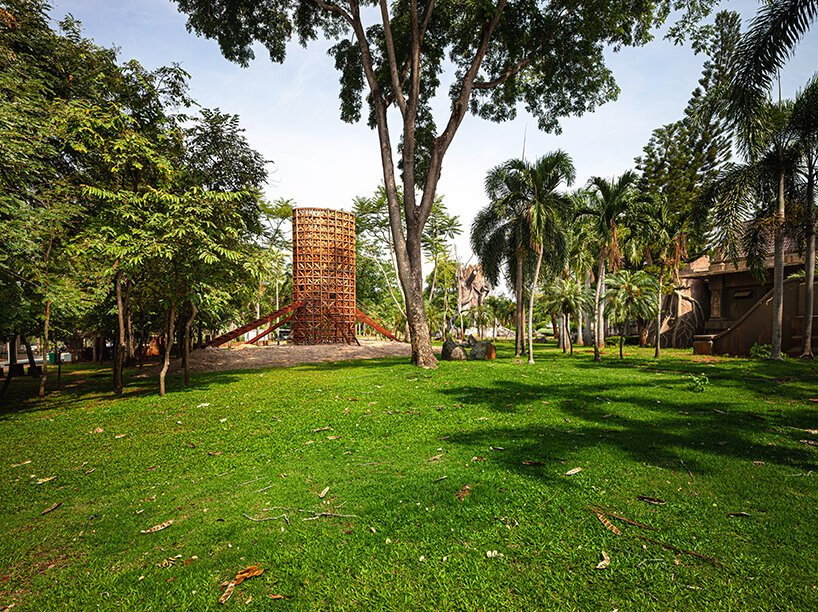 Through a mindful repurposing of dilapidated rural barns, Bangkok Project Studio “was inspired to give new language to the wooden barn,” creating a structure that’s multipurpose in both its messaging and practical uses. Serving as a playground for children by day and a habitat for local birds and animals at night, the structure is truly meant to be welcoming to all. Now, one of the area’s most signature features has become something new and impressive that’s not only symbolic, but symbiotic, working in tandem with its natural surroundings to create something beautiful and useful.