A new museum in Palestine is finally opening its doors to the public. The Palestinian Museum is located in Birzeit, Palestine and was designed by Irish architecture firm Heneghan Peng. The museum is the flagship project of the local Taawon Welfare Association, which works to support marginalized communities in Gaza and the people living in Palestinian refugee camps in Lebanon. In 2011, Heneghan Peng won an international competition for their idea of creating a “museum hub” in an area just 25km north of Jerusalem. The completion of the impressive 3,500 square meter museum and its surrounding 40,000 square meters of landscaping is just the first of a two-phase master plan. 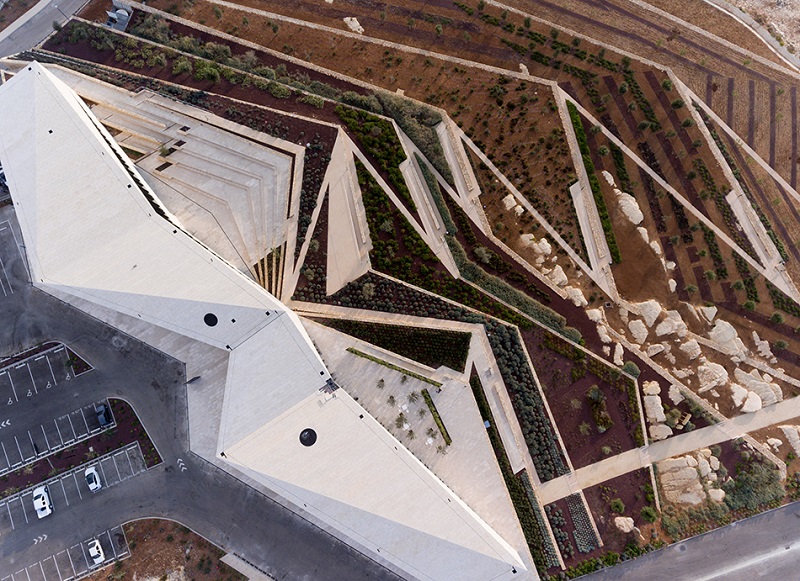 Ultimately, the design team hopes to tie the museum to the land around it by drawing on the rich history embedded into the terraces on which the building now sits. The architects explain, “The landscape of the Palestine has the ‘worked’ quality of a city; every element of it has been touched and tells a story of intervention, production, culture, environment, and commerce.” Palestine has obviously had a very complex historical narrative, and the museum’s development is intended to honor its diverse culture and more accurately tell its story to the public.

The building respects the existing nature of the terrain: it undulates sharply, following the kinks inherent to the topography and replicating it in parts to create a direct link between architecture and nature. A series of terraces, all made from field stone walls that trace the shapes of the area’s original agricultural structures, unfold in a cascade down the hill that the building sits on top of. Plantations of fruit-bearing trees, vegetables, grains, and flowers grow in these terraces and fill the spaces with lush olives, pomegranates, figs, apricots, almonds, carobs, walnuts, wheat, chickpeas, mint, za’atar, sage, chamomile, jasmine, and lavender. The plants closest to the museum are almost entirely domesticated species while the plants in further away terraces become increasingly wild. This concept was also conceived of as a way of faithfully recounting the Palestinian story, says Heneghan Peng: “The cascade of terraces tells a diversity of stories, citrus brought in through trade routes, native aromatic herbs, a rich and varied landscape with connections east and west.” 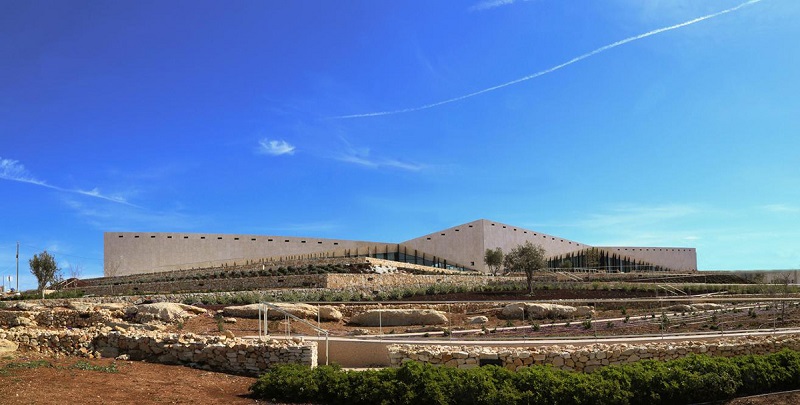 The museum itself is spread over two similar volumes which contain exhibition spaces, cafés, research facilities, classrooms, and an outdoor amphitheater. The building’s facade is covered in a neutral limestone that is native to the region, which makes the entire structure look like it’s rising out of the ground and allows it to seamlessly blend in with the paving slabs on the floor and the nearby auditorium. 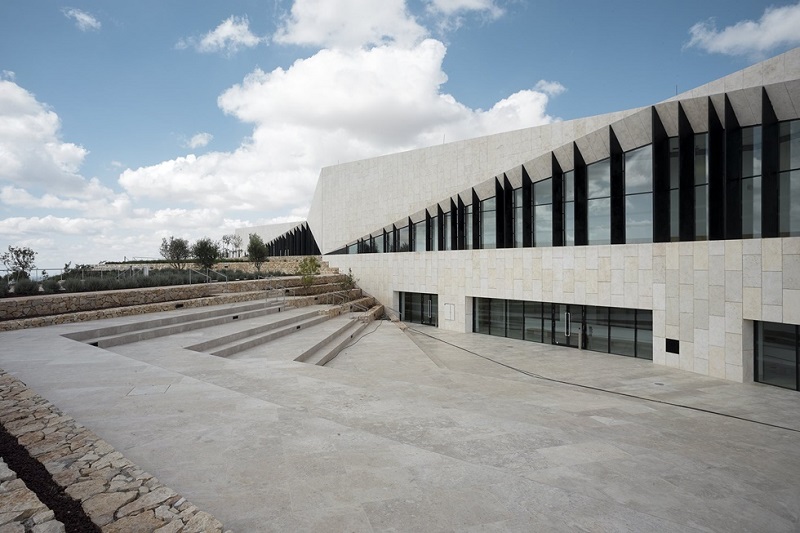 In May 2016, The Palestinian Museum first opened, albeit without any exhibits. This alone should serve as a testament to the importance of the actual building regardless of what’s inside of it.  Recently, the museum proudly announced its first calendar of events and exhibitions for the 2017 – 2018 year. The inaugural program will consist of five major exhibits and will see a number of exciting digital projects come to fruition. The museum is expected to fully open in September 2017, when it will be showcasing art that explores the representations of Jerusalem as a global city over the past fifty years.