Cities like San Francisco and New York offer numerous advantages to entrepreneurs, but sometimes none of those benefits are enough to outweigh the cost of building a business in those places. From apartments and offices to studios and laboratories, it can all become extremely unaffordable extremely fast. This is why cities like Pittsburgh and Detroit have seen their tech industries grow in recent years, as entrepreneurs continue to realize that their chances of success might be better away from the more affluent coastal cities. To prevent cities like New York from chasing away their inventors and creative classes and becoming large ghettos of wealthy residents, places where entrepreneurs can thrive have to be made. The New Lab in Brooklyn is just such a place. 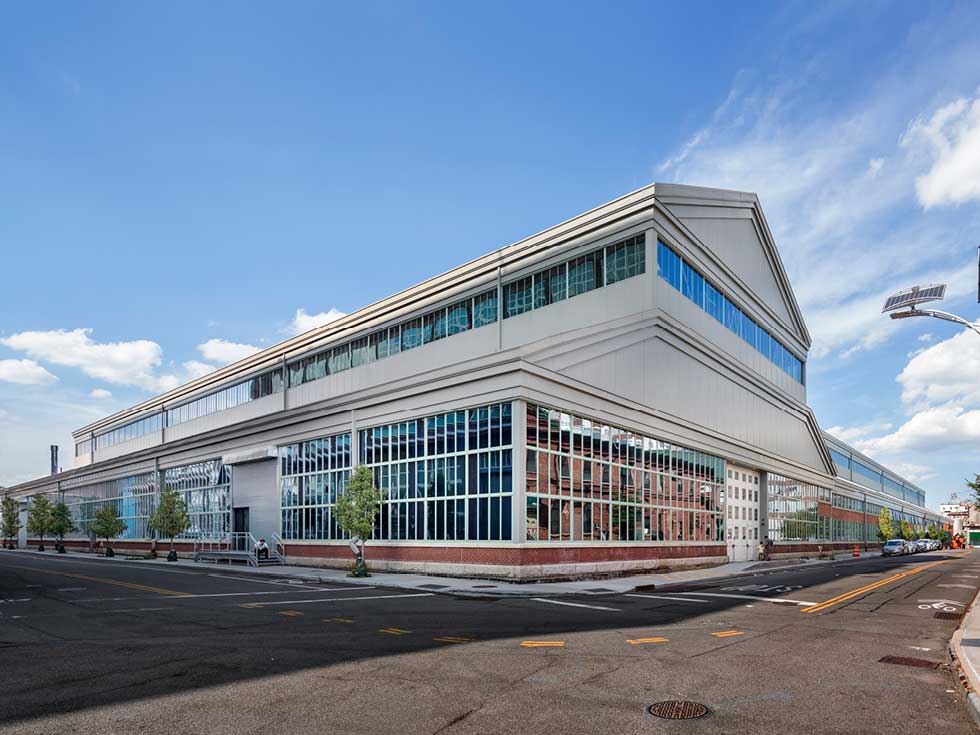 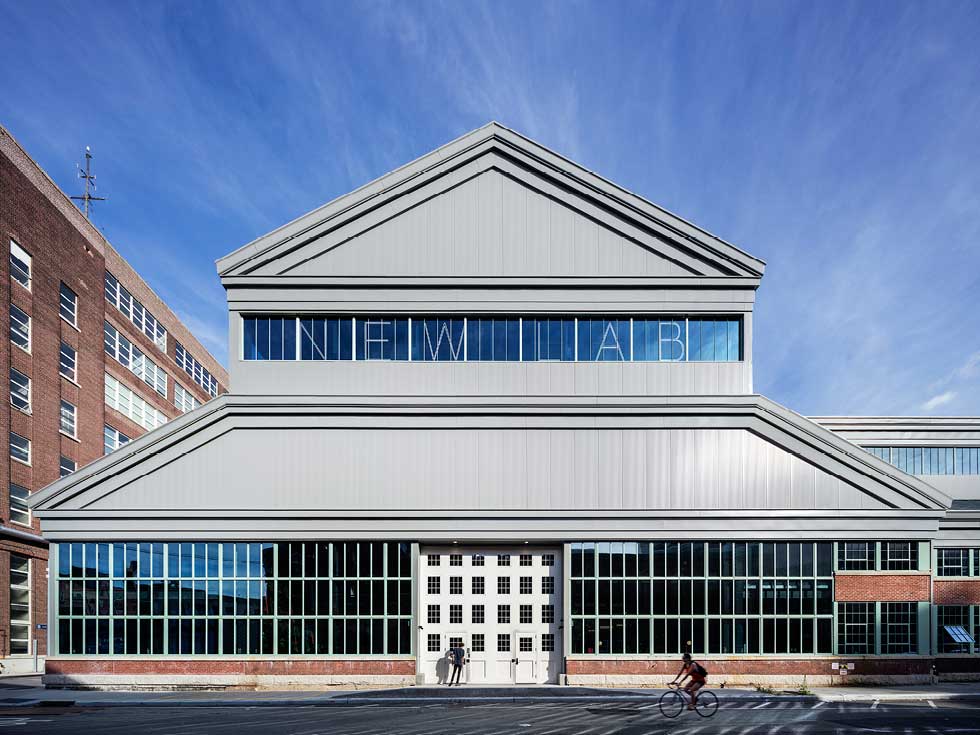 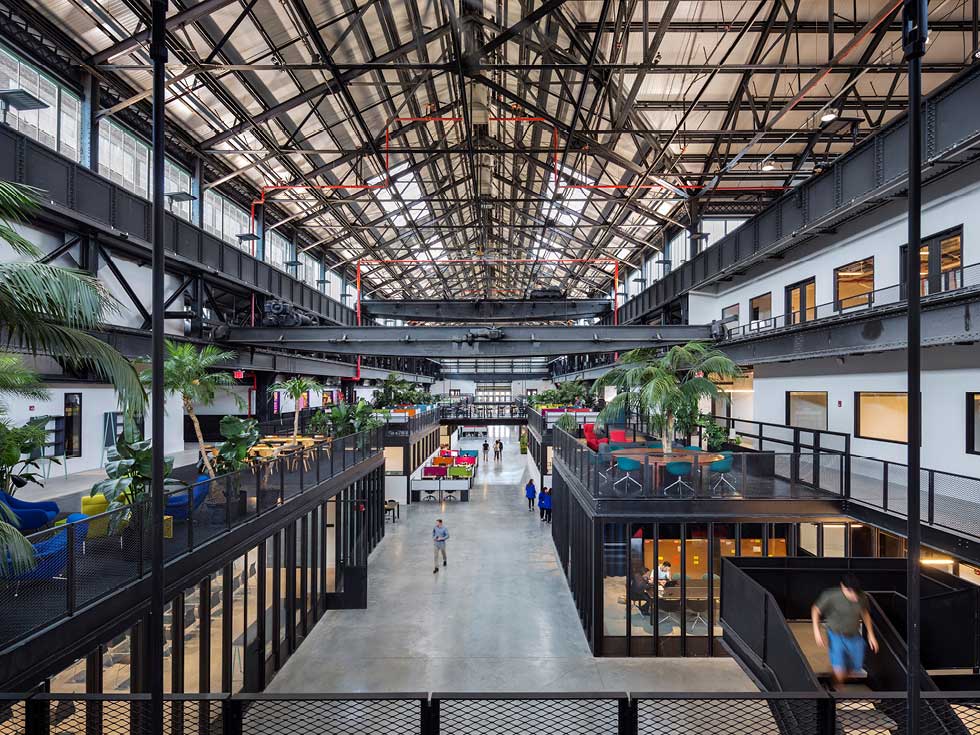 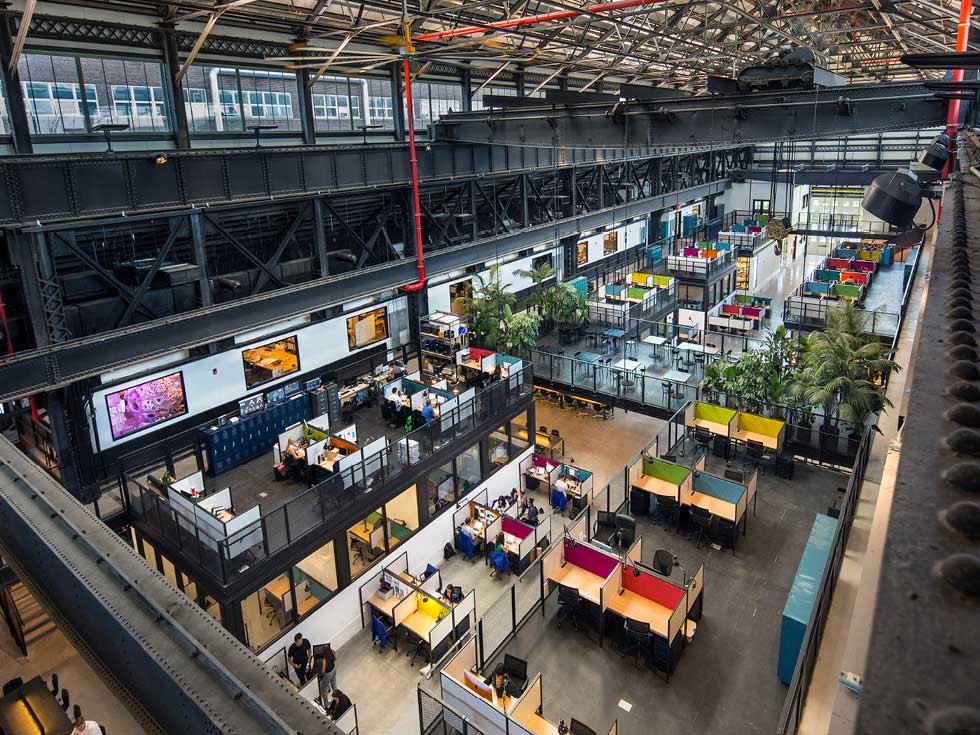 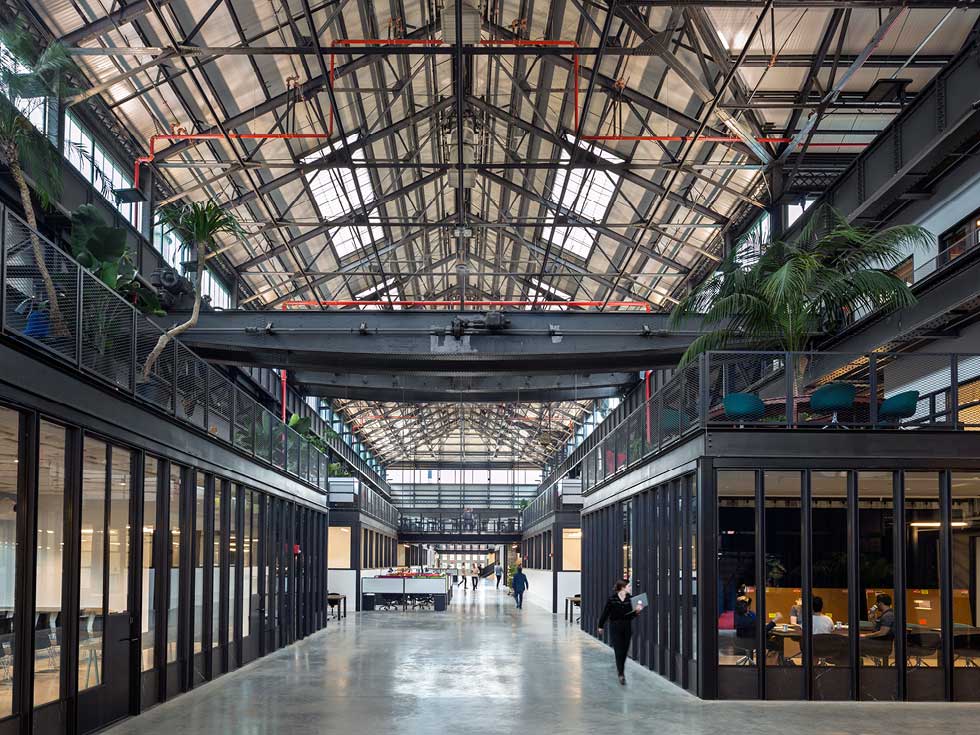 The tech co-working space is part of a 250,000-square-foot building called the Green Manufacturing Center. More specifically, New Lab is in Building 128, a former ship factory in the Brooklyn Navy Yard. Since September of 2016, the innovation hub has occupied 82,000 square feet of the manufacturing center.

In 2011, when the building was first considered for the home of New Lab, it was a hollow, rusted shell of America’s manufacturing past. Today, it is a collaborative space for fabricators and tech entrepreneurs in the fields of artificial intelligence, design, urban technology, wearables, life sciences, robotics, nanotechnology, and interactive architecture. It is also one of the few hubs in New York City for hardware technologies, despite the fact that there are numerous software incubators in the area.

Home to 50 companies and 350 workers, New Lab is comprised of offices, industrial facilities, 3D printers, CNC milling machines, metal labs, wood shops, a paint spray room, a kitchen, a café, and an event space. The high-caliber tools and machinery necessary for product manufacturing can be as costly as $150 an hour, so it’s easy to see how budding entrepreneurs stand to benefit from sharing equipment and materials. 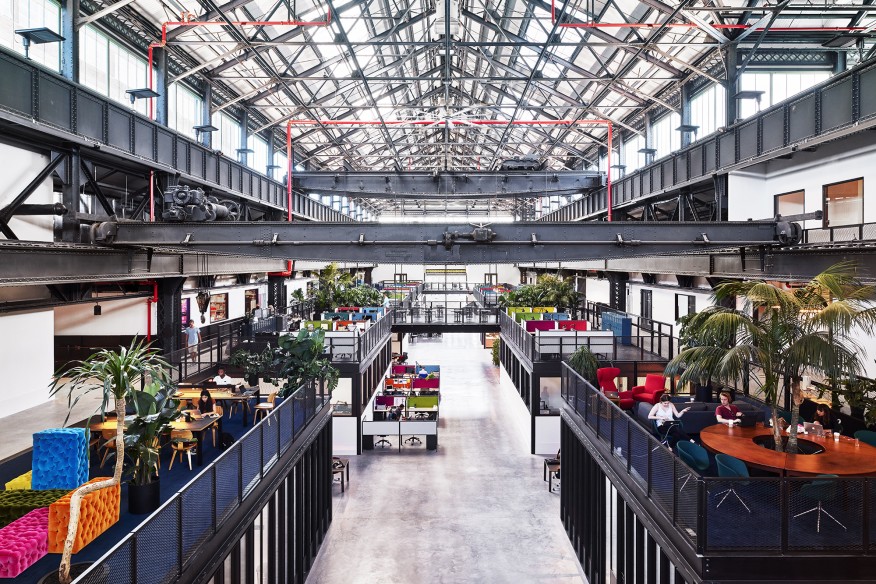 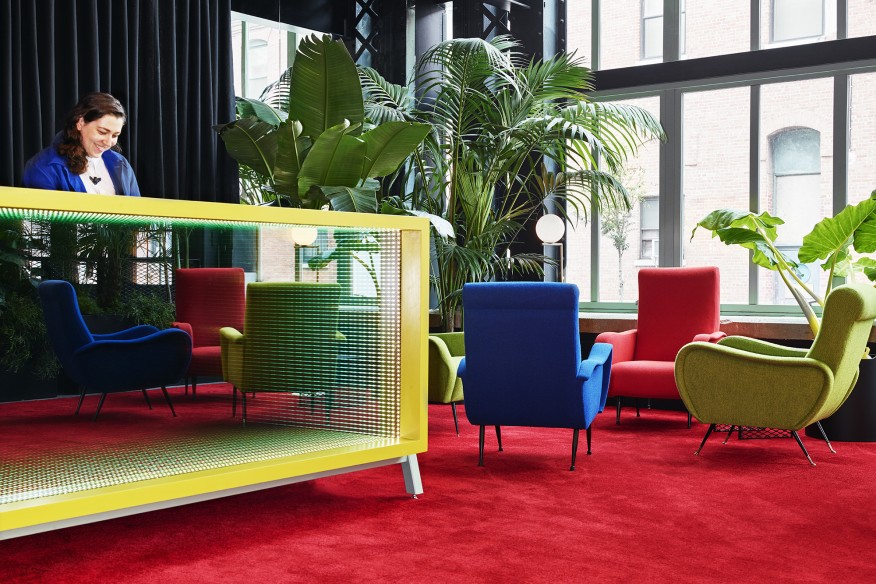 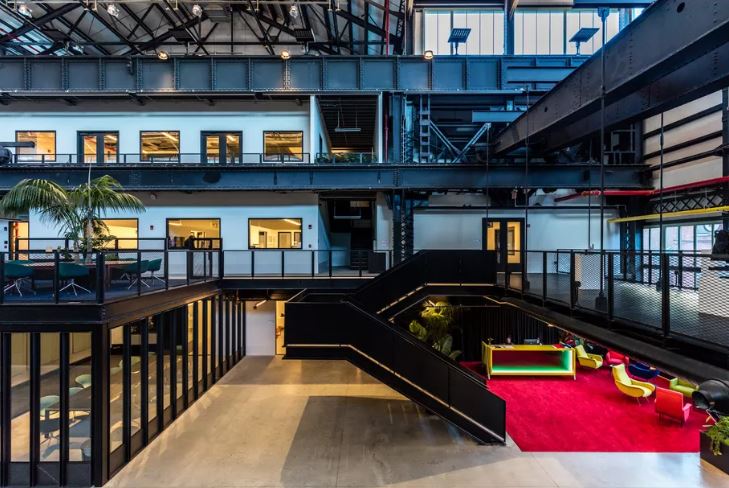 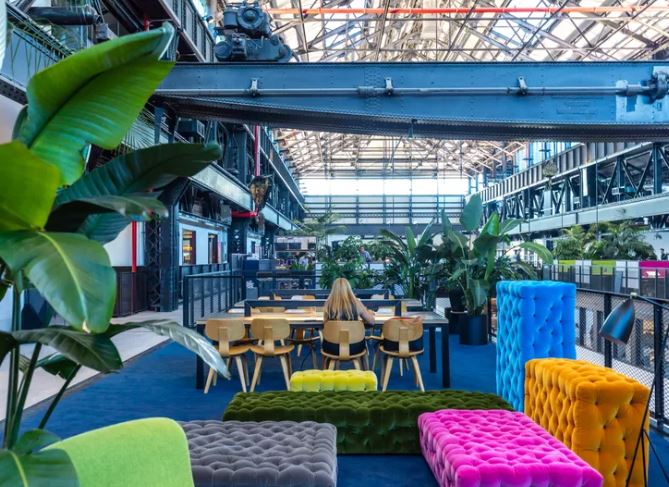 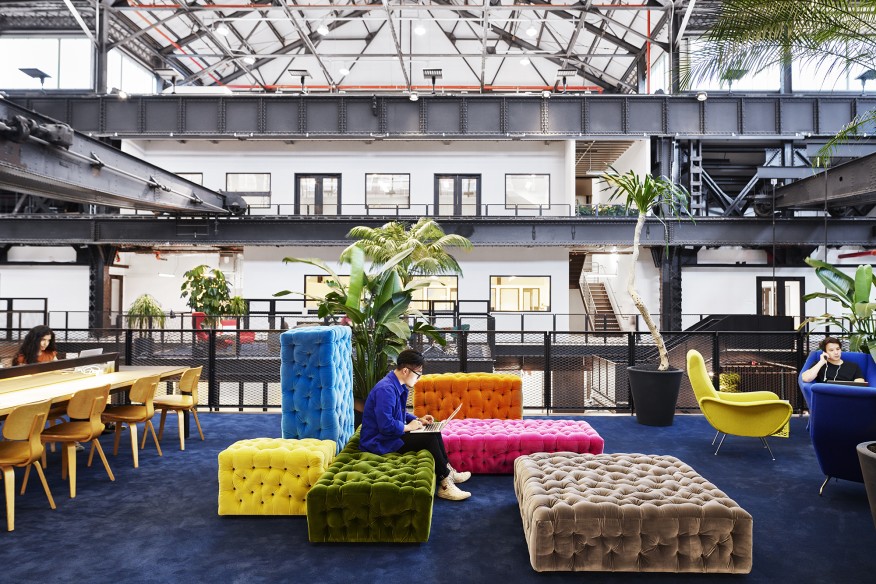 “Our vision is that New Lab will be a supportive and collaborative working environment for designers, engineers, and entrepreneurs — people trying to accomplish really hard things — not in Silicon Valley or at MIT but right here in Brooklyn,” said Scott Cohen, the Co-Founder of New Lab, a couple of months before the space opened.

Although it is a space for advanced technologies, it does not fetishize tech, nor does it feel like a big Apple store. Instead, the industrial characteristics of the building are left as an acknowledgement and sign of respect to the past. The original concrete floor has been retained, as have the steel structure and the gantry mechanisms hanging from the ceiling 70 feet above.

Designed by DBI and Marvel Architects, New Lab’s interior walls and frames are almost entirely black and white, using technicolor furniture and plants to emphasize communal spaces, workstations, and lounges. The first floor has an event space, conference room, lounge, colorful cubicles, and a kitchen. On the second and third floors, you’ll find a collection of catwalks and walkways leading to studios, laboratories, and offices. As a tech co-working space, it strikes a careful balance between the collaborative and the private. It took 10 months and $30 million to redevelop, with about $18 million of that in private investment. 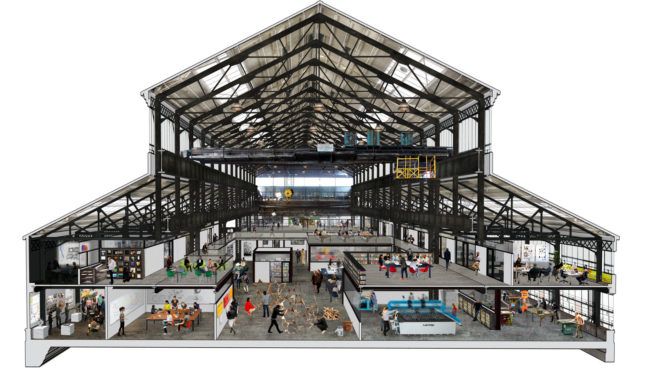 At New Lab’s ceremonial opening in the summer of 2016, Terreform ONE founder Mitchell Joachim called the space “a cathedral to design and thinking.” Other New Lab members include EcoSystems Brand, Honeybee Robotics, Nea Studio, StrongArm Technologies, and 10xBeta. 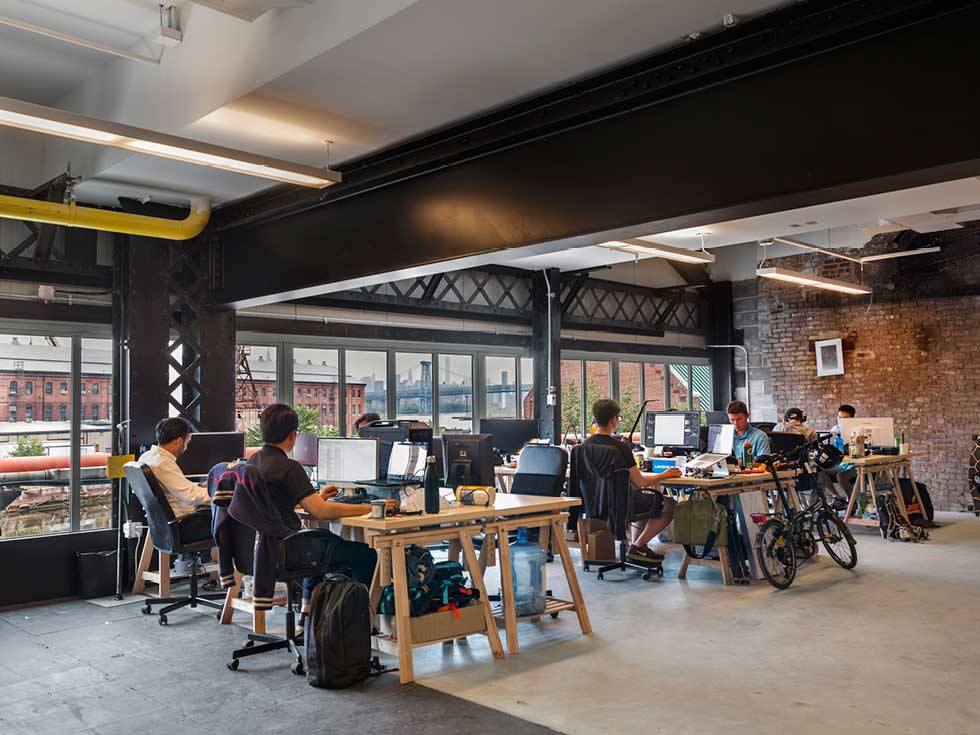 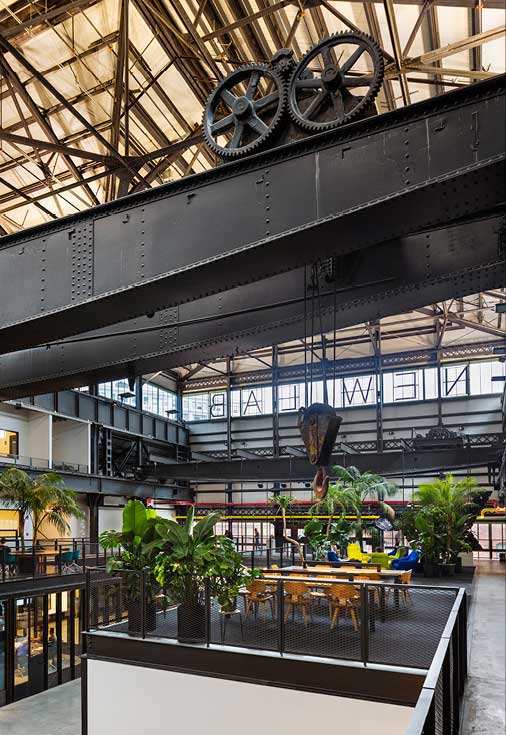 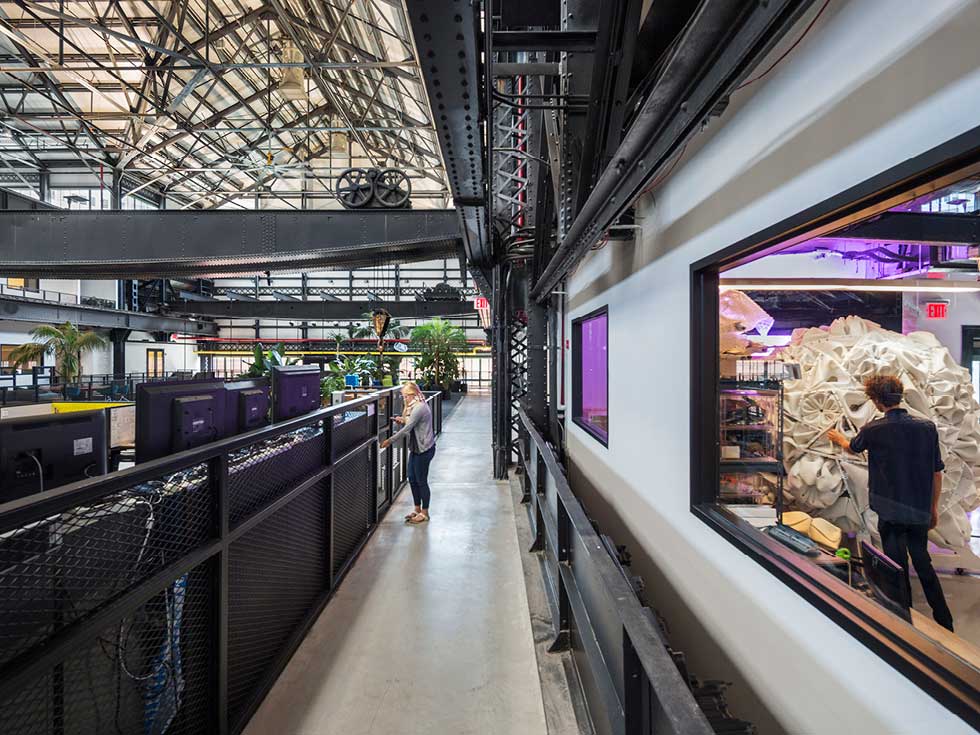 The Green Manufacturing Center expects 16,000 workers to visit the area daily by 2020. Currently, about half that number work there, including those at New Lab. The city itself hopes that tech co-working spaces like New Lab will be able to both draw and retain entrepreneurs, preventing it from becoming a home for only the monied few.