Clothing brand COS, best known for its androgynous cuts and clean lines, has just opened a new store in Chicago, with an aesthetic inspired by modernist masters like Piet Mondrian and Mies Van Der Rohe. Their influence is immediately evident in the shop’s elegant exterior, whose four-story glazed frontage sits between a historic and a contemporary building on East Oak Street. The area is known for its concentration of luxury retail brands and makes up a key part of Chicago’s upscale shopping district. Piet Mondrian and Mies Van Der Rohe were two of the most influential designers of their time. Van Der Rohe in particular made significant contributions to Chicago’s famous architectural landscape, designing iconic buildings like the 860-880 Lake Shore Drive apartments and the Chicago Federal Center. These buildings marked a seachange in skyscraper design at the times of their completion, and now their aesthetic is reflected in the sophistication and minimalism of the East Oak Street COS store.

The store was designed by COS’ in-house designers, who explain that “Mies’ buildings, still present in the area, offered a great range of interesting framework and inspiration for the store’s detailing. In particular, the sheerness of Mies’ work and use of steel profiles and glass surfaces influenced the store design.” 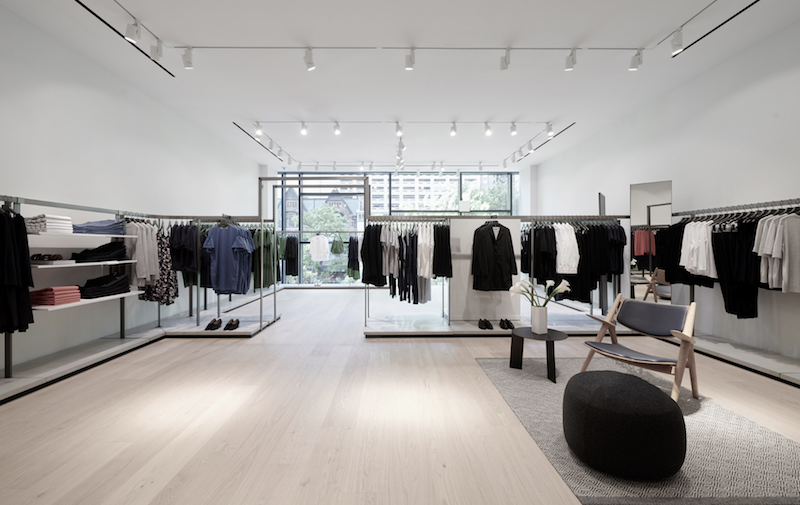 The influence of other noteworthy designers makes an appearance inside the store, with chairs and furniture by Charles and Ray Eames, Hans J Wegner, and Finn Juhl dotted throughout the shop’s seating areas, which themselves are mostly interspersed by COS clothing displays. The designers used hanging rails to define, enclose, and break down different areas within the shop, with clothing racks acting as spatial tools that not only allow customers to browse with ease but also give the clothes space to breathe.

The new store will be COS’ largest brick-and-mortar location in the US. COS Managing Director Marie Honda said of the project: “We are thrilled to have opened COS Chicago and to now be present in a city that inspires us with its creative influence and architectural history.” The store will be stocked with menswear, womenswear, and childrenswear, taking its place in the brand’s roster of thoughtfully designed retail premises around the world. As well as being known for designing clothes that appeal to a wide range of people because of their minimal and streamlined appearance, COS is also often at the cutting edge of retail design, collaborating with architects and interior designers to create new properties and pop-up shops where their clothes can be fully appreciated alongside impeccable design.