The rolling hills of this picturesque corner of Paradinha, Portugal have long been nearly empty, except for a small, formerly abandoned village. Recently, newcomers moved in to build the Paradinha Village Resort, offering nearby city dwellers a tranquil nature retreat accessed by narrow roads that criss-cross through the mountains. The hoteliers commissioned Portuguese firm Summary Architects to deploy a series of 11 guest cabins across the challenging terrain, which was too remote for standard construction methods. 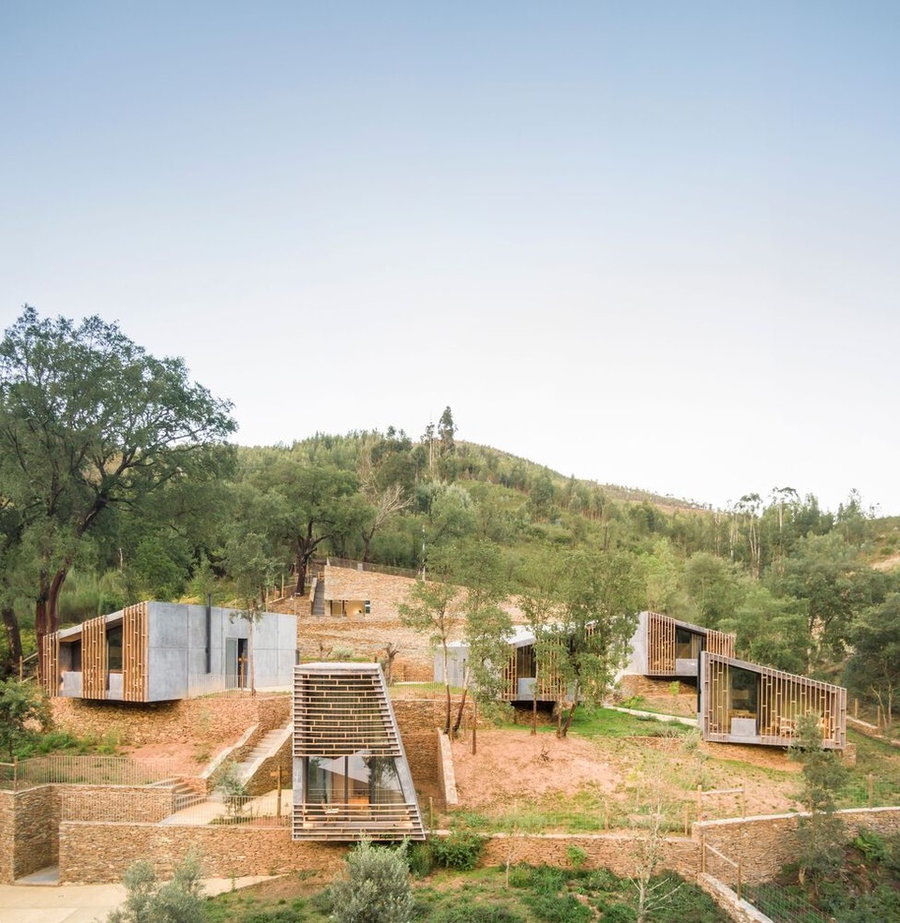 “This project was an opportunity to make new experiences within the Gomos building system: in each house, all the technical installations (water, electricity, and climatization) were concentrated in just one module and extended to the other models externally,” the architects say. “This procedure was standardly repeated in the whole project, accelerating its production/assembly process.” 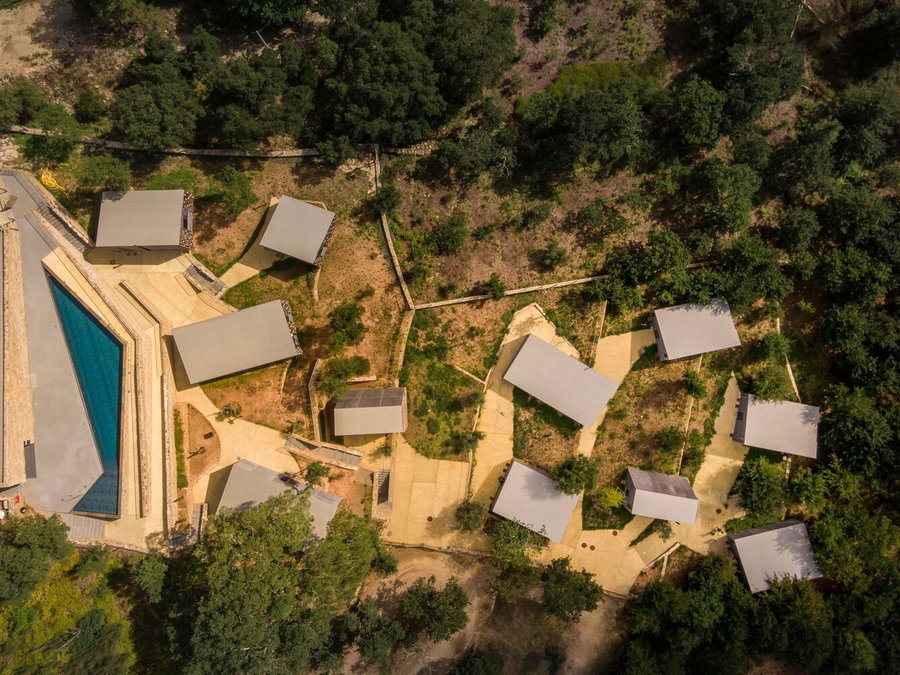 Summary’s Gomos building system consists of concrete modular elements that simplify the building process. Derived from the way ordinary sewer pipes are constructed, the system is redesigned in order to make it habitable while preserving the stability and rapid deployment abilities of the concrete shells. It takes just a few days to assemble the buildings once they arrive on site. 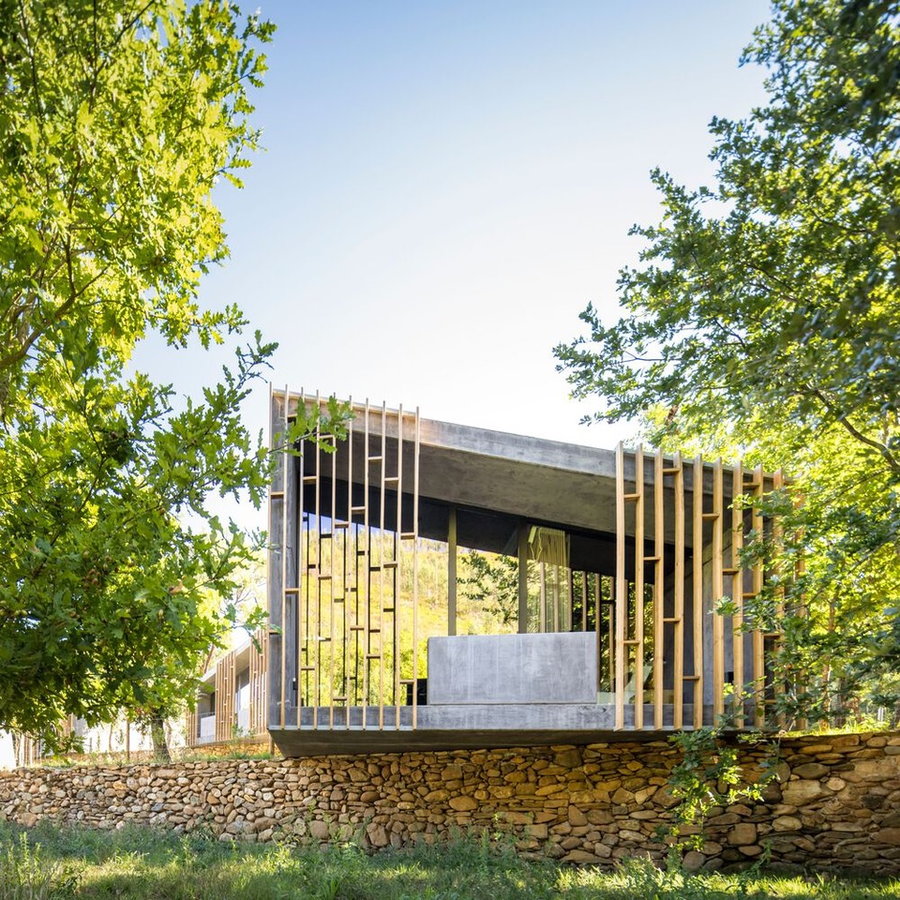 Summary calls this system “evolutionary,” explaining that each module leaves the factory completely ready to live in, including all interior and exterior finishes, insulation, windows, water and electricity, and even built-in furniture. The system is designed to be flexible, so the structures can be sized up or down or given slightly different proportions according to the user’s needs. 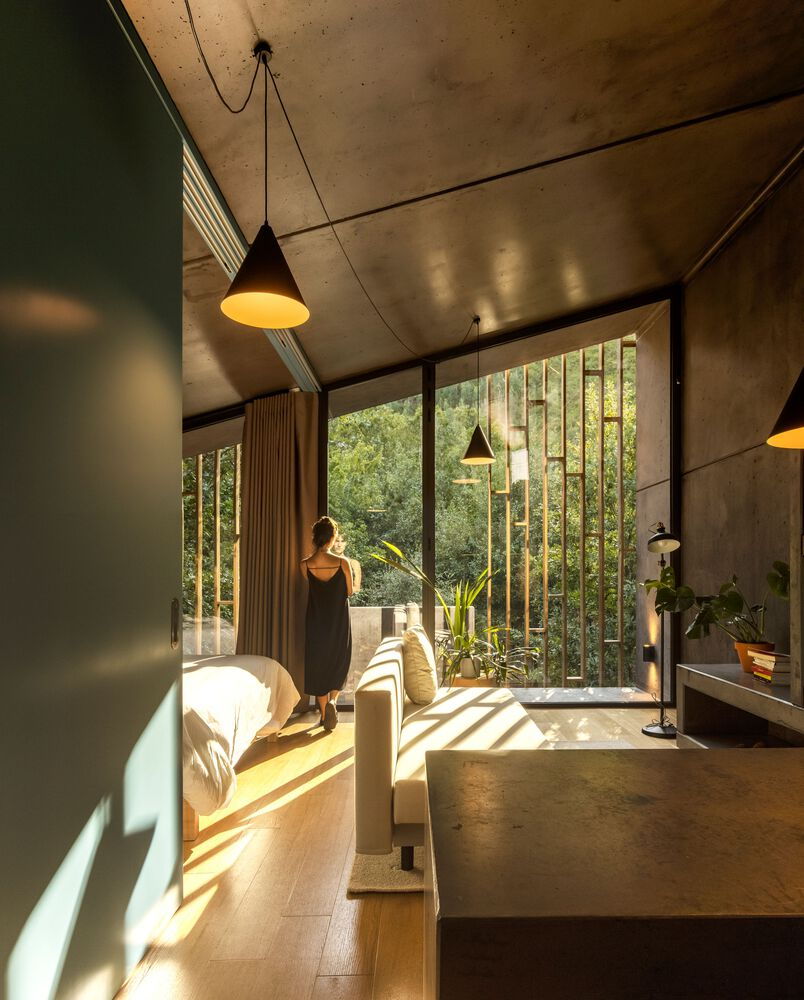 In Paradinha, this translates to a series of angular modern buildings sheltered from the harsh sunlight and set at just the right angles to take advantage of the views. To the casual observer, the location of each one may seem a bit random, as if they were scattered across the plot and allowed to remain where they fell. But in reality, they were carefully arranged to follow the contours of the landscape and create privacy for the inhabitants of each one. 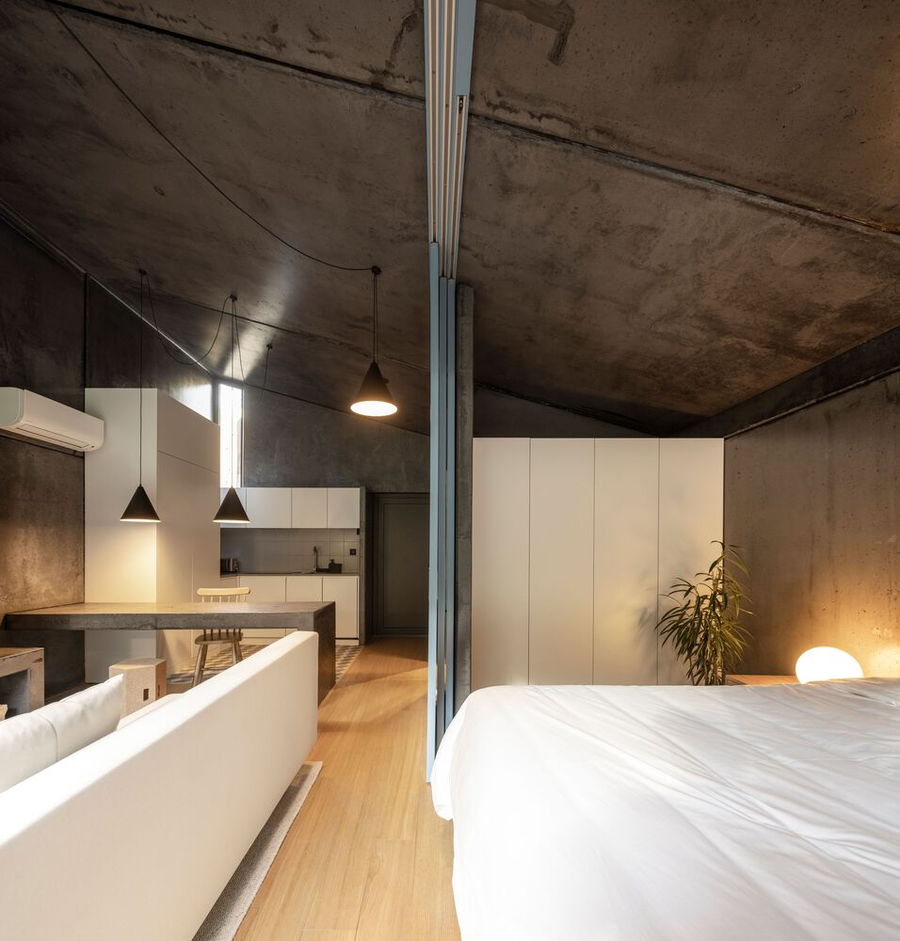 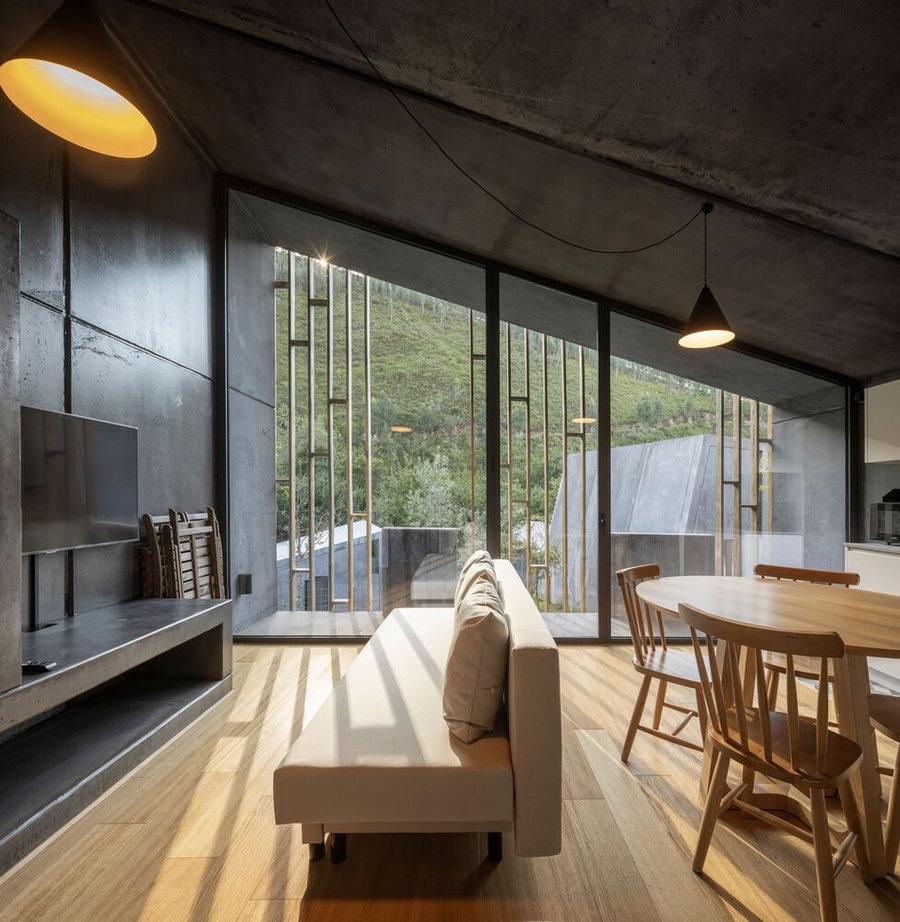 “They are distributed across the plot according to the natural configuration of the terrain, altering it as little as possible,” say the architects. “The old stone walls and the existing trees were preserved — the houses were carefully placed around them. Combining this apparently arbitrary positioning with different orientations allowed the houses not to block each other’s views. From the balconies, behind the wooden slates, we can see the forest and, in some cases, the river.” 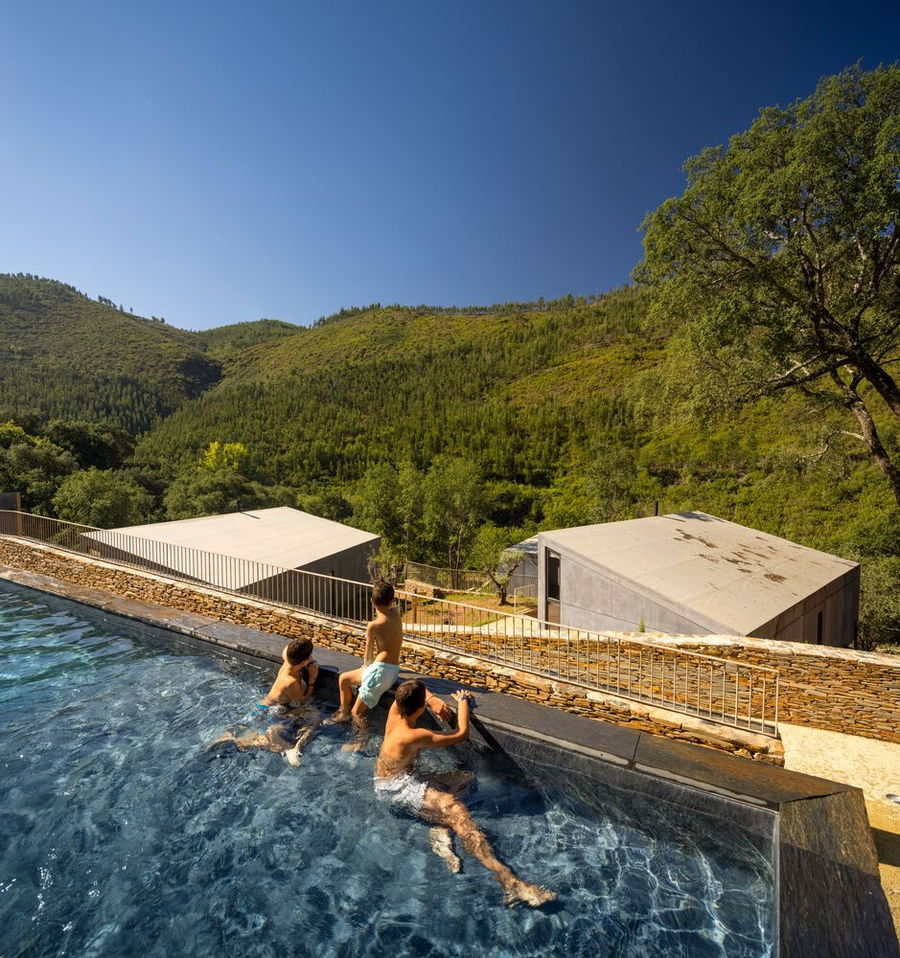 The project proves that modularity doesn’t have to mean cookie-cutter identical structures all in a row. The concrete prefab cabins consist of four different shapes and sizes, ranging from 300 square feet to 625 square feet. Some are oriented horizontally, others vertically, their layout determined by pre-existing trees and landscape features. Each one features inscrutable concrete facades pierced by geometric windows, with one all-glass facade screened with latticed wood for shade in the heat of the afternoon. 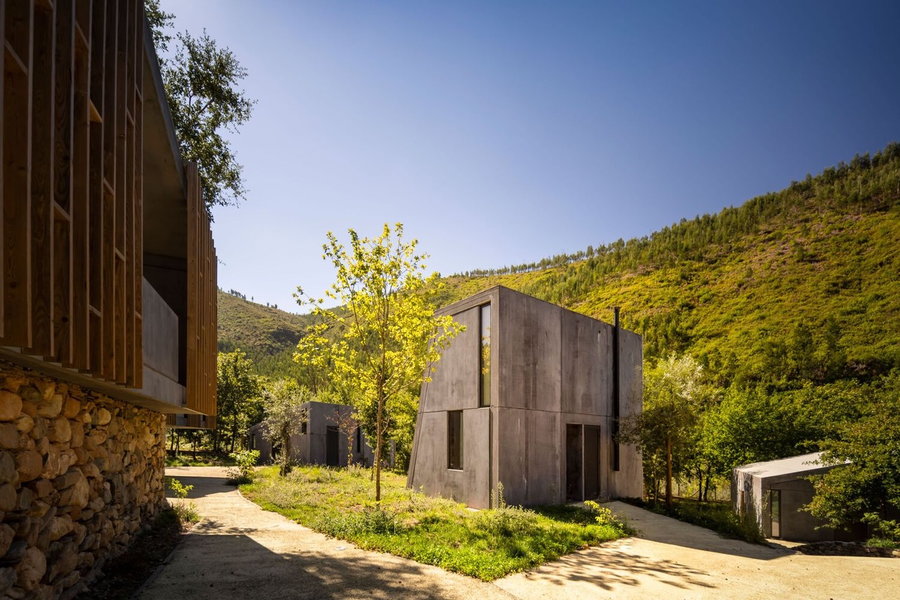 “Resorting to prefabricated structures was not just a choice, but the only efficient option we had to simplify the building process within such conditions,” the architects explain.